So, this is not the dress I was expecting to show you. However... 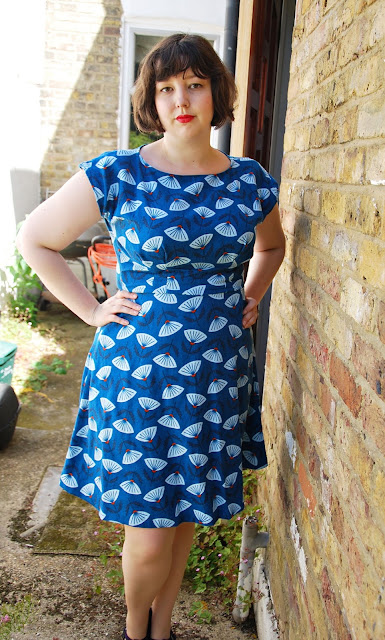 ...I am pretty bloody pleased with this thing.

Quick back story: I planned to make an Anna dress out of multicoloured viscose challis, and I did. I finished it several weeks before the wedding, and I felt very pleased with my productivity. Two weeks beforehand, I tried it on and noticed the back had gone insane - there was a load of excess fabric that stuck out away from my body and made me look like a hunchback. "I can probably fix that," I thought, and put it to one side. A few days later I tried it on again to work out how to fix it, and the front had gone funny too. While it was probably fixable it wasn't guaranteed, and I wasn't exactly sure what I'd need to do. I decided it would be easier and safer to make another dress for this wedding and fix the first dress to wear to the next wedding in a month's time. Then I panicked quite a bit and didn't even manage to cut the dress out until three days before the wedding (i.e. the night before I needed to finish it because of travel). So this was a bit of a stress dress. 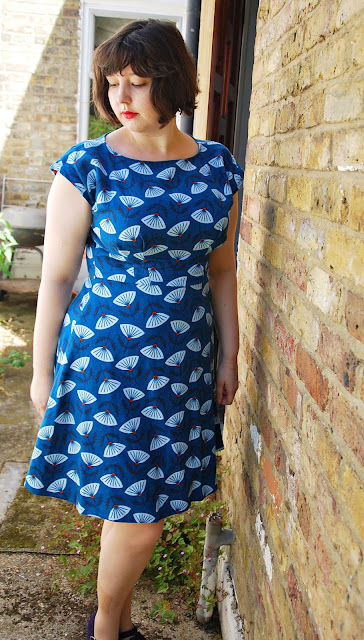 But I love it SO MUCH. This fabric is an organic cotton barkcloth that I've been dreaming about for a month. I saw it when we bought the fabric for my jumpsuit and since then I've been on the Ray Stitch website several times a week checking it's still there and trying to work out what on earth I could do with it. It was £25 per metre, by far the most I've ever spent on fabric, so 2m was the absolute most I could stomach buying. I debating back and forth for days on what I should, or could, make from it. The print is fairly large and the fabric fairly thick, so I didn't want to do too much detailing and panelling, but I also didn't want to do this beautiful and stupid expensive material a disservice. Eventually I went for the simplest thing I could come up with: a By Hand London Anna bodice with Butterick 4443 skirt. Four pattern pieces, no lining. The bodice has an interesting enough shape not to be dull, and the skirt is as simple as it gets but in this fabric holds a really nice flared shape without being floofy. 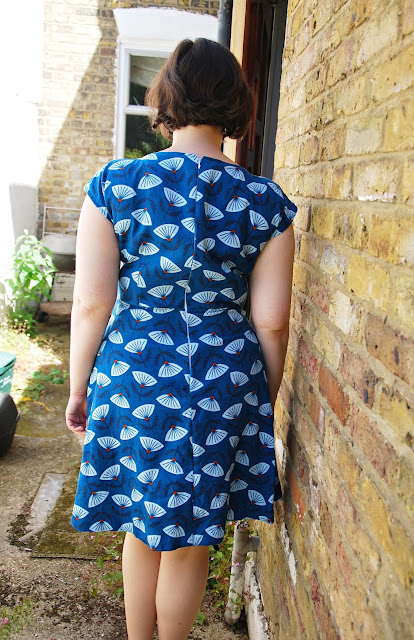 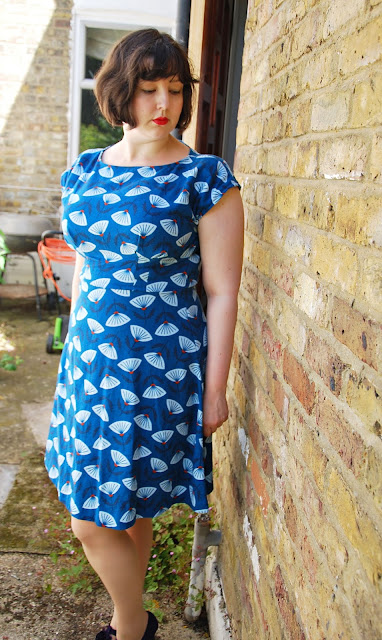 The mash-up went together fairly easily, except that I had to take the skirt side seams in by a ton (and that's with going down a size from my last version) to get it to match up with the bodice. I clearly still haven't got to grips with Big 4 sizing. However, this fabric is a really loose weave and the second it got cut it started fraying all over the place. So I, paranoid and not taking any chances, decided to bias bind every single one of my seams. 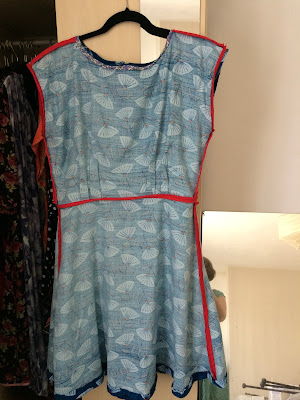 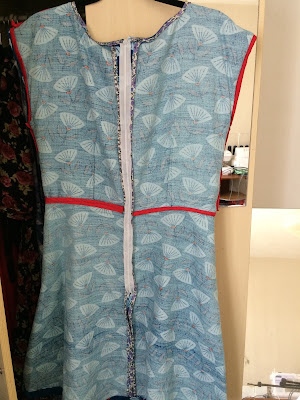 I had a package of Liberty bias binding left over from a Christmas present project which I used for the neckline and back seam, and bought red to use everywhere else. Because why not have secret red seams? 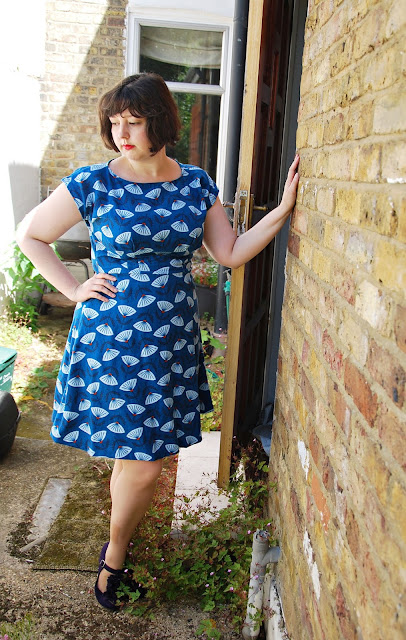 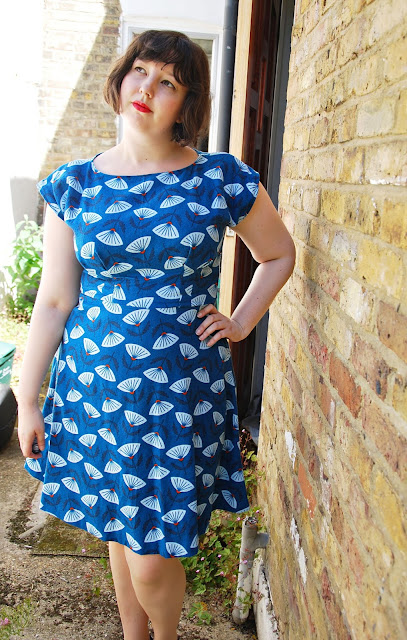 I really wanted an invisible hem, but because I was so worried about fraying I turned it up once and machined it, then turned it up again and stitched it by hand. This is a GREAT fabric for invisible hems, you can't see a thing. 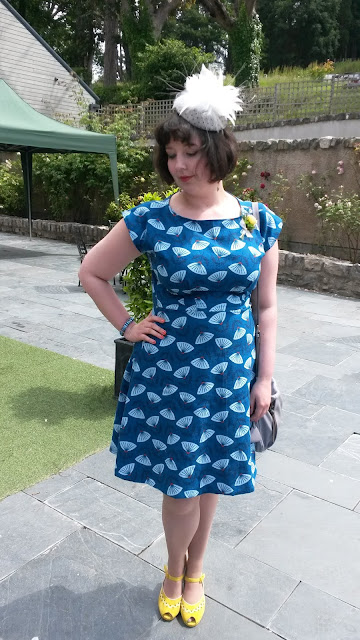 I wore it for the wedding as you see here: bright yellow shoes, grey and white feather explosion headpiece, blue bracelet and earrings longer than my hair, which is my literal favourite thing about having this haircut. I felt pretty damn swish. 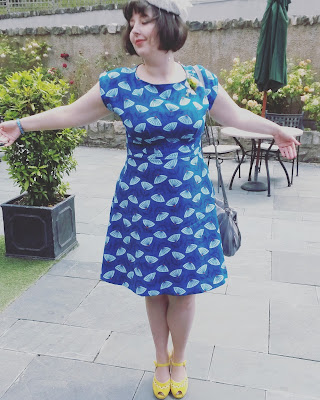 This is definitely not an everyday dress, but as I discovered when scouring my wardrobe for a back-up dress, I have actually been very good at not making random party dresses for no reason. I'm thrilled to have this, and I've already worn it again - our anniversary was a couple of weeks ago and we went to Artesian at the Langham Hotel for the world's most pretentious cocktails, including one in a gold box full of pebbles, one served in a box of lights and dry ice, one on the back of an ant and one in a giant Meccano elephant (all delicious, except the ant which smelled unsettlingly of Weetabix and had bits of potpourri in it). 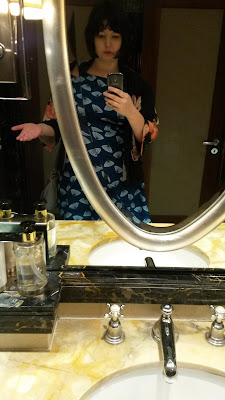 Illustrated with this very confusing photo from my phone. WHY would you mirror the entire wall and then put fake mirror shapes over it? What is the point except to further disorient your drunk customers who have been drinking out of Meccano elephants?

Ahem. Anyway, in conclusion, this is one of my favourite things I've ever made. The mash up works incredibly well, and can be squeezed out of 1.5m of fabric provided you don't cut your bodice out wrong the first time which of course I didn't do because that would be stupid. I will be doing this again, albeit with slightly less fabulous fabric next time because how could it not be? 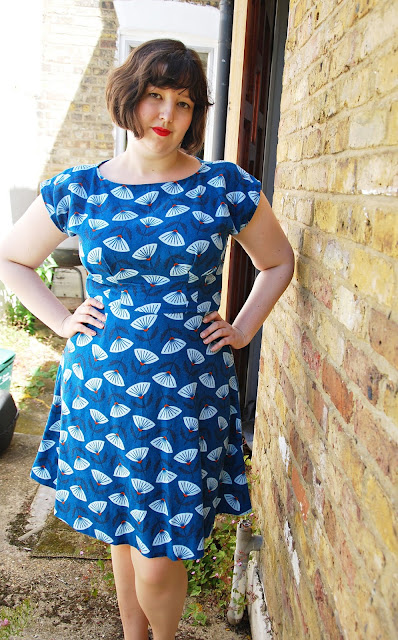