summer sewing: an ambivalent review of the Amy jumpsuit

I'm back! We had a really great holiday (Biarritz is WAY too expensive to stay in but the food is fantastic, and San Sebastian is just beautiful and lovely and chilled and everyone should go if they have the opportunity) and I have eaten so. much. fish. I love going on holidays to seafood places. We also had two horribly expensive meals, courtesy of Patrick's father who has been saving for this for about twenty years, one of which was the biggest wankers' paradise I have ever been to in my life. They started off by giving us a dictionary of culinary witticisms, and at one point served me a very small piece of green pepper with three (THREE) glasses of wine. I felt quite sick by the time we left.

With that out of the way, here's what happened to my bronze viscose: 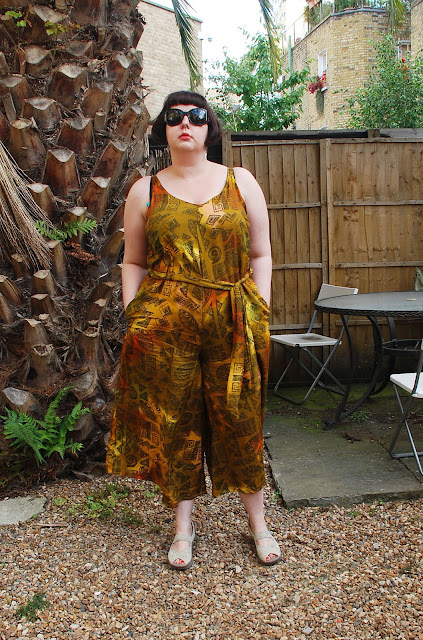 This is the Closet Case Patterns Amy jumpsuit, and I've been putting off writing up my review because I genuinely can't decide what I think of it. Please bear with me as I attempt to work through my various thought processes.

First of all, I will say that my worries about this colour and print being overwhelming were completely unfounded. Somehow on the body the print is much less in your face and the colour seems to lean much more in the bronze/mustard direction than HI LOOK AT ME I AM EXTREMELY YELLOW AND ALSO EXTREMELY PRINTED. I really like it. 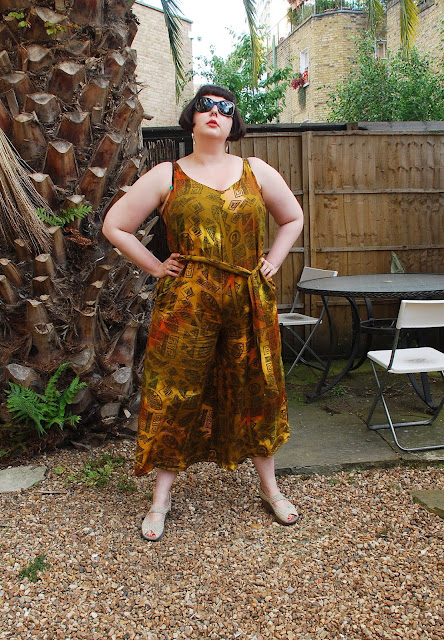 The Amy pattern is intended to give the impression of a simple summer dress while actually being a super-wide leg jumpsuit, and that was a good part of the reason I decided to make it. I wear jumpsuits all the time in the summer because they protect against chafing while allowing me to keep relatively cool, and I liked the idea of a faux dress that didn't require an extra layer of shorts. It's incredibly comfortable and non-restrictive, and I think if we were having a summer like last year's I'd be wearing this a whole lot more. 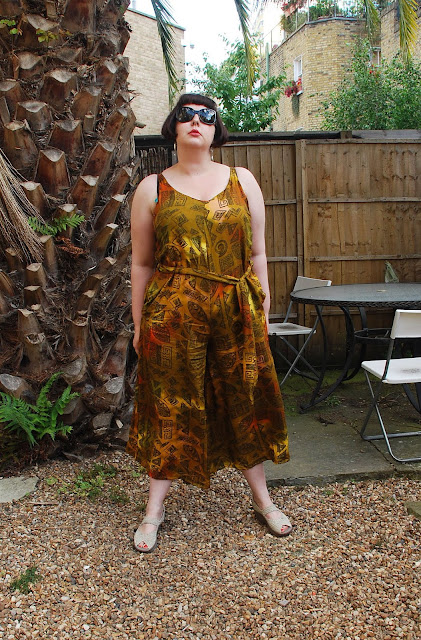 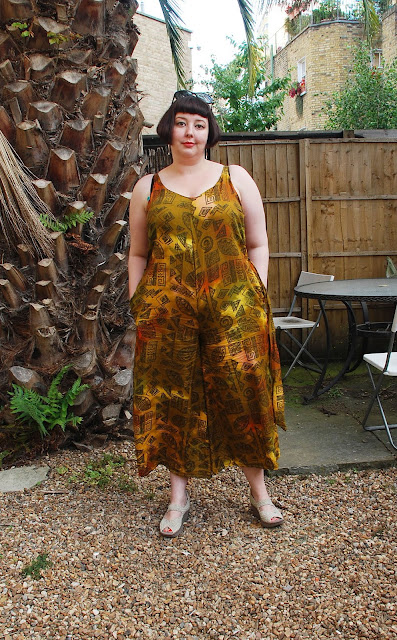 I think I have two main qualms with this pattern, the first being simply that I'm not sure the style is right for me. I think I'd like it better if I'd had enough fabric to fully lengthen it. Midi length skirts and cropped trousers are things I almost always steer clear of, and though I will ignore my personal fashion rules occasionally if the overall idea appeals to me, I think this looks a bit odd. Also it means I have to take into account how hairy my ankles are, and I will never like any garment enough to commit to a strict depilatory routine.

The overall shape is another thing I'm not quite sure about. I thought the belt would be enough to do the shaping work, but even with that I don't think it's quite right. Possibly the faux dress/culottes thing works against it here, as belting a dress isn't going to disrupt any crotch seams. As you can see, I'm not a fan at all of the jumpsuit without a belt and I would never wear it that way. Some people can pull off the tent look, I am not one of them. 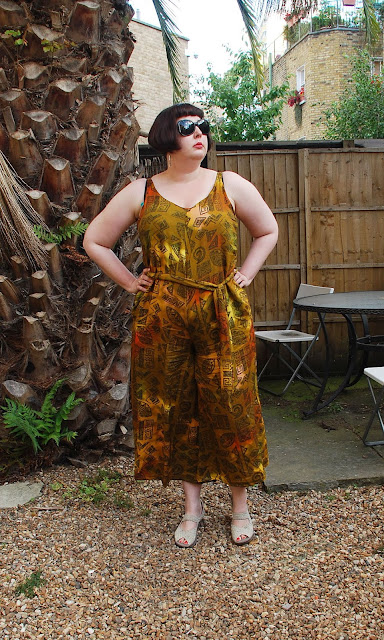 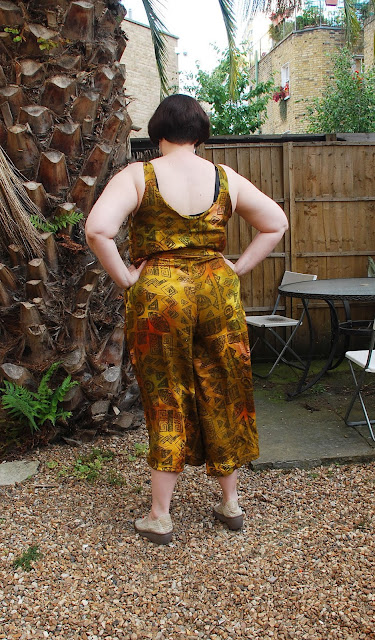 In regards to the actual pattern, there were a couple of things I really didn't like. The first, and more minor, point is that this pattern comes with a belt but not belt loops. This is a very specific pet peeve of mine - I am a naturally very scruffy and easily dishevelled person, and sashes become very quietly unknotted on me all the time. If it's not attached to the garment by other means, I WILL lose it on the Tube and not notice until three hours later. This has happened to me more than once. It may be that this doesn't really bother other people, but it really annoys me. I can deal with it on something like the Esther trousers, where belt loops would really change the look of the garment and the sash fabric isn't slippery at all and won't snake itself loose at the least opportunity, but not here. Belt loops, please. 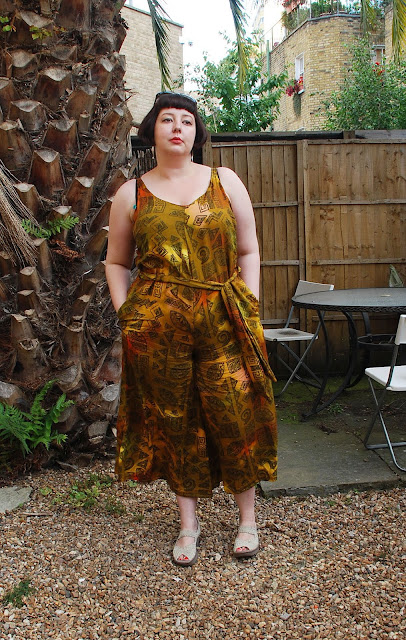 Point two is the side zip and pocket. Now, I don't like side zips at the best of times. I understand that they're sometimes necessary and I don't tend to fault pattern makers for including them, it just always takes the wind out of my sails when I read the envelope of a pattern I really like and it says "side zip". This pattern requires a 7" invisible zip, which I found really hard to track down. I certainly couldn't find one in anything resembling a matching colour. At first I thought I could just use one of my 9" zips, but any longer than 7" and it gets in the way of sewing the side seam pocket. As it was I still found it quite annoying to get both the zip and the pocket sewn well in such close proximity. It has left me with a bit of weirdness on that side, which I think really impacts my feelings about the whole garment. If you have proportionally smaller hips than me, you can just leave the zip out and skip all this nonsense, but I wouldn't be able to get into the jumpsuit without a zip.

(My machine has historically HATED shortening zips, so I don't even try anymore. I don't know what it is that makes it so upset, but it judders and glowers and swears at me by putting words in the stitch number display. We've agreed to just avoid it altogether.) 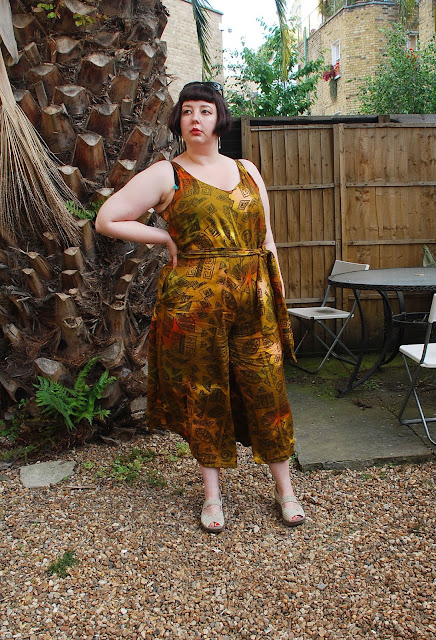 On the other hand, it is incredibly comfortable and I do like the look and the vibe. As I mentioned at the start, this is the wrong kind of summer for this kind of garment, and if things were less grey and muggy I'd probably feel a whole lot better about wearing this. I'm looking over these photos now and enjoying the way it looks, and I'm not sure if I was feeling self-critical and frustrated the last few times I put it on or if this is just one of those items that photographs a lot better than it looks in the mirror. If I'm feeling up to it I might try re-sewing the zip and clearing up the weirdness a bit, and that too might make me feel better about the whole thing. 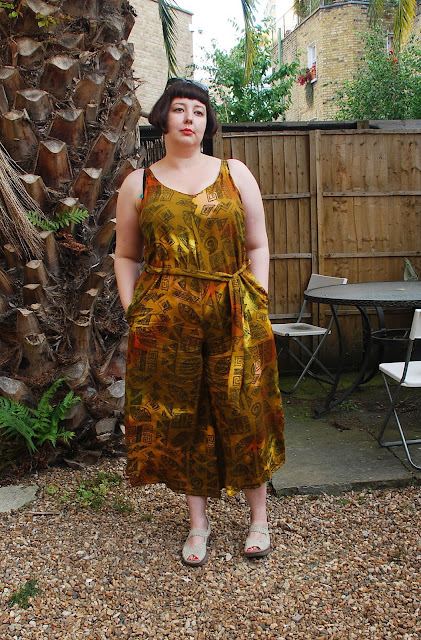 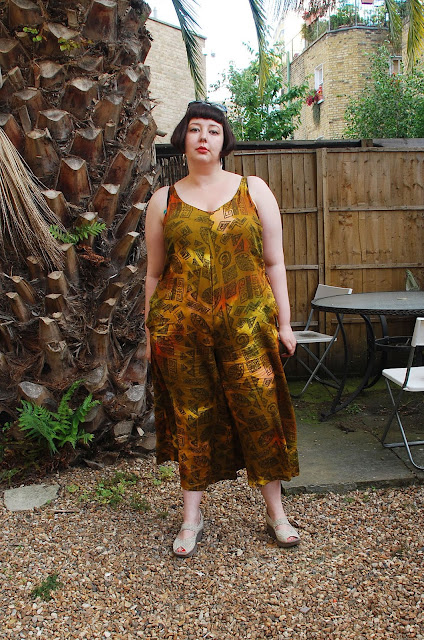 On hotter days I often do hang out in the house wearing this. I think I've mentioned before that our living room is basically a greenhouse, so it's often a lot warmer outside than it is inside. This jumpsuit is the perfect thing for existing in my living room and not turning into a horrible roasting sweatbeast. I'm actually wearing it right now for exactly that reason, and having put it back on I do think that the weirdness around the pocket and the fact that I have to care what state my ankles are in are the main barriers to me wearing this jumpsuit. The first I can probably fix, the second I probably can't. 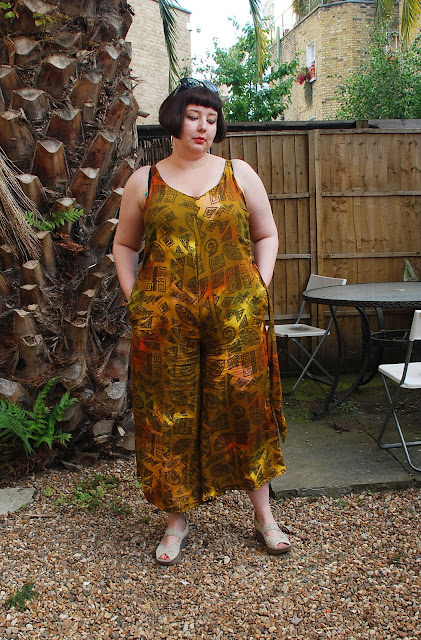 My final verdict is inconclusive. I'm pretty sure I won't be making this again - the shape just isn't what I want and I'm not really interested in working out how I can change that. I do hope that I can make my peace with this version and get some wear out of it, though; I really like the fabric and I do think this was the right kind of garment to use it for. If I could be inspired enough to fix the mistakes I think that would go a long way to changing my feelings.

What's up next depends on what I can get photographed. The things I've made are anti-chafe shorts and an improvised bikini (my attempt went extremely wrong and I ended up making a pair of bottoms to match a sports bra toile I made and forgot to post earlier this year), neither of which really lend themselves to being photographed outside. We'll see what can be done! 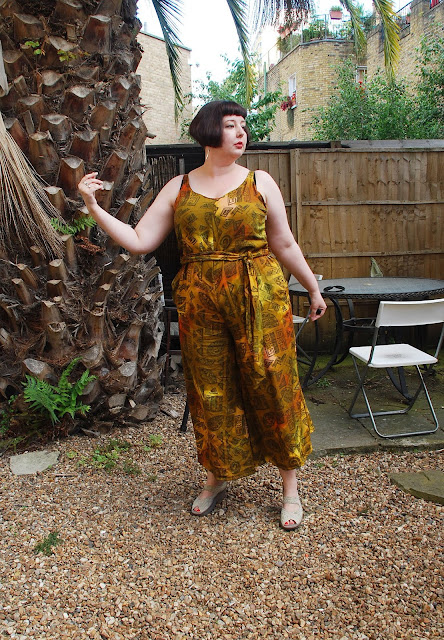