I did not mean to go radio silent for two months. My health has been a problem thanks to, you know, everything, and my creativity has been completely shot. I've not even been able to write, which is super unusual and scary for me. And then we decided to start house-hunting, which is even more draining (especially when you're avoiding public transport and you have to walk to every single viewing). But now we've had an offer accepted, so fate and paperwork willing we'll be moving into a place that's actually ours very soon. Our current flat is beautiful and lovely in so many ways but it breaks all the time and it's almost impossible to get them to fix anything. Over the past couple of days our ceiling has started leaking again, in two different rooms, because the guys upstairs got their bathroom redone but for some reason not made waterproof? Why. We are spending our last months here with takeaway containers taped over the light fittings.

Anyway! You're here for sewing.

By Hand London are (finally) expanding their size range and have come up with a D cup bodice block for the larger sizes. I fit into the top end of their original size range, but need a substantial bust adjustment, so I was curious to see what the fit would be like on the new block. BHL sends out updates to their patterns automatically but the new size range was by request, so I asked for it. 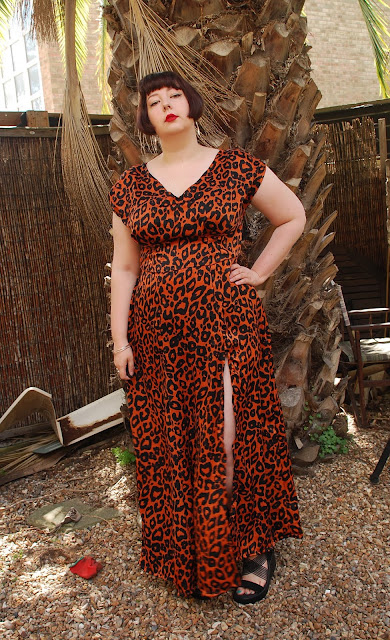 You might recall this fabric from a post I made a few months ago, where I said I didn't want it to be a dress because I didn't like the colour next to my face. Most of the suggestions were for a long skirt, which was my original intention, but the longer I put it off the more I realised I'm just never going to wear an ankle-length orange leopard print skirt. It's either too fancy or not fancy enough, and I just couldn't picture where or how it would get any use. When I first thought about testing out the new bodice I was reluctant to order any new fabric (most of the stuff available online is too expensive for a test and since we're now moving very soon I don't want to acquire too much more bulk to transport), and decided that I might as well use the awkward orange leopard print and get it out of my stash rather than hold on to it forever waiting for the mystery perfect pattern to present itself. 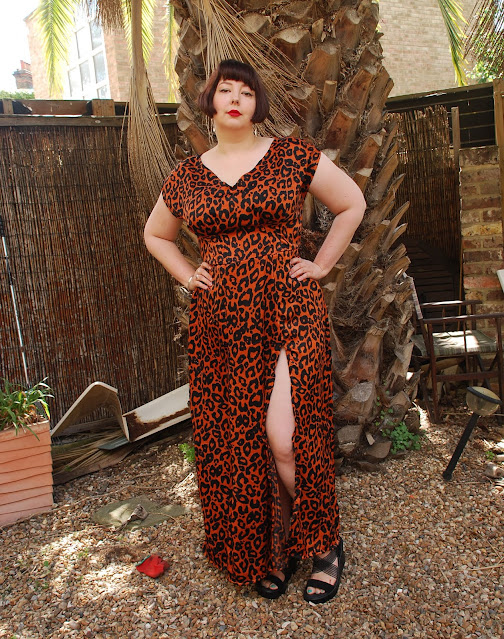 I basically never trace my patterns unless forced to, but I had done so with my previous Anna bodice in order to alter it. 2016 Jen had zero interest in a V neck bodice and I never bothered to make that version or copy the cutting line onto my pattern piece. I'd completely forgotten there even was a V neck option until I came to cut this version out. Taking the fabric down further away from my face seemed like a sensible idea. 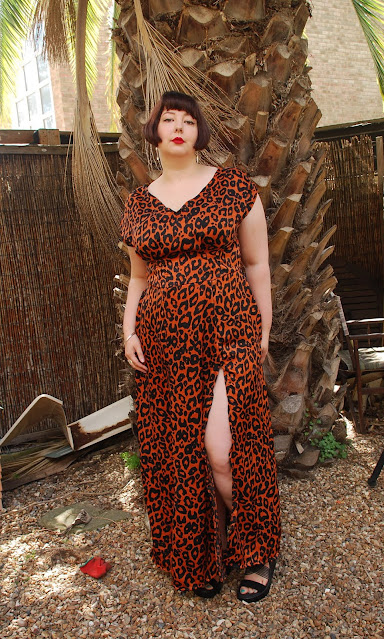 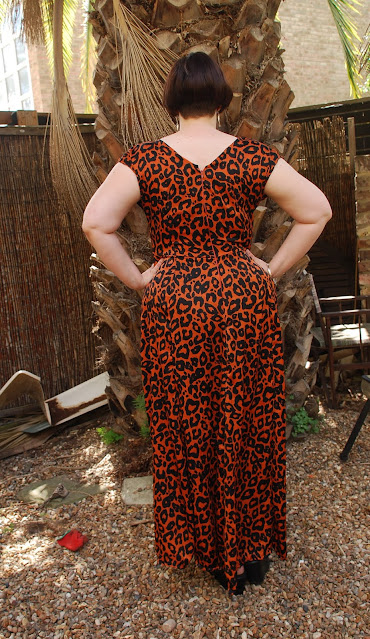 This version of the bodice is a UK 16. What I probably need is a D cup 14, probably even a 12 in the back. On this one I had to cut down the back panels by about 2.5cm and take in the side seams by a further 1cm each side. I increased the length of the underbust pleats by 1cm as the bust as drafted seems to sit a little lower than mine and it made the whole thing look slightly nightgown-ish on me. For future versions I'd also fold a couple of centimetres out of the front neckline, as it's a little loose. I can't stand facings so I swapped that for bias binding, and also altered the back to a V to cut down on the excess of orange leopard a little more. 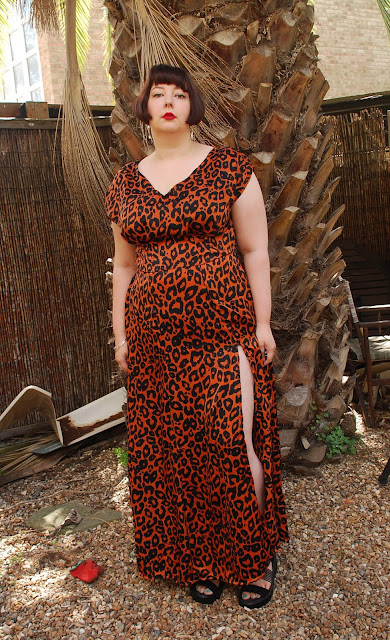 When I first tried this on I thought it was a bit frumpy-looking, and ended up taking the slit several centimetres higher to counteract that. I normally keep it as it is but this version really needed the extra bit of skin. 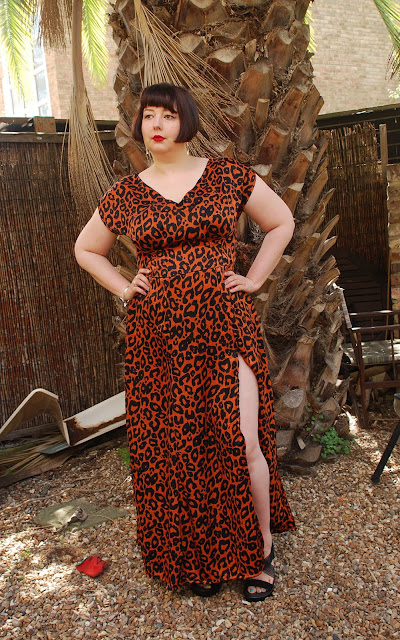 This fabric is unlike any I've used before - it's a substantial but also shifty viscose with a very silky feel and the fibres sit almost like hide - so before I did any of the finishing I spent some time sewing test stitches into scraps to see how it would look and whether I'd need to hand finish the whole thing to make it wearable. I concluded that it wasn't so bad as to need handstitching everywhere but the neckline would definitely look off if I machined it, so I slipstitched the bias binding down and hemmed everything by machine. In retrospect I should have handstitched the slit as well.
Having worn this dress to go out into the garden and take photos of it, I'm glad yet again that I didn't make the fabric into a wrap skirt. It turns out that it sticks to everything. Coming down the stairs back into the house I got stuck to the brick wall no less than three separate times, and had it been a wrap skirt there would definitely have been indecency going on. 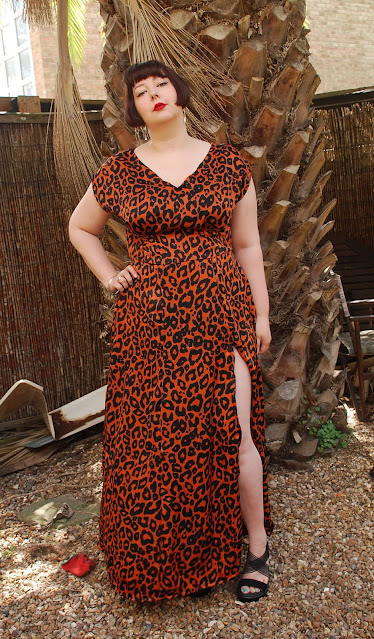 Will I wear this? I don't know. Thanks to a combination of quarantine and really weird weather I'm only wearing a very tiny proportion of my clothes anyway. What I am thinking of is wearing this as a housewarming dress. We're obviously not intending to have the big party we would otherwise have had, so assuming things don't go horribly wrong and we're all banned from other people's houses again we're going to have lots of little gatherings in twos and threes. And since we have lots of friends with fun clothes they've not been able to wear in months, I'm considering a fancier dress code. I deliberately didn't over-fit this so it's very comfortable for sitting around in. 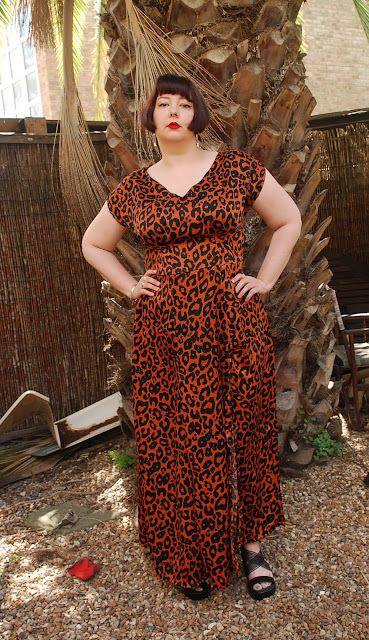 I'm hoping to be inspired by the prospect of imminent relocation to get on and get some more fabric out of my stash. My plan is to attempt some sort of "sew every day" challenge next month like I did in September last year, and to write about how that's going if I don't have any finished projects to share. I have some things arriving from Minerva as part of their blogger partnerships and I'm hoping that will be motivating too (I asked for something really expensive and they agreed to send it to me, so I now kind of feel like I scammed them even though it was literally on the list of fabrics to pick from? Anxiety disorders suck).
If all continues to go well I'll be back again next week, probably with text rather than another project unless a miracle happens this weekend. I hope you're all safe and holding up! 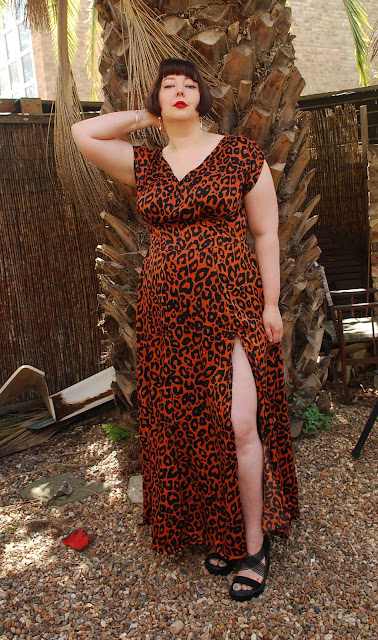 Bonus question: does anyone know of a good tutorial for switching out the collar on a jacket pattern? I want to make a heavily modified version of the SOI Amelia jacket and the number one thing I want is to get rid of the pointless flat collar for something that looks better. I've never really altered jacket patterns before and collars aren't my strong point, so I don't really know what I'm doing. Any advice on an easy change or a signpost to a more in-depth walkthrough would be super helpful!
Posted by Jen at 16:00 10 comments: