Yeah, I know we're nearly a month into summer already, but we're still doing this. I've been trying to write this plan since May and it's been WAY harder than it usually is because my fabric stash is not very coherent at the moment. Most of the things I have are either a) remnants that require very fabric-economical patterns or b) expensive (relatively speaking) fabric that I bought because it was beautiful without any real idea what I was going to make with it. This is something I'm determined to never do again, and since I realised the problem I've been very good at leaving the pretty stuff in the shop if I can't visualise it in clothing form. As it is, however, the size of my fabric stash doesn't correspond with the number of viable projects I have. I've done an emergency shopping trip which went quite well, giving me enough of a starting point to pull a plan together and enough hope that the fabric and patterns I'm still missing will find their way to me over the next month or so. It'll be fine, right? Right??

Anyway. Since I've missed most of the first month, this plan is slightly shorter than normal and divided into two: red items and black items. I know red and black isn't the most traditionally summery colour scheme, but I haven't made very much of either and it's what I fancy right now. I almost called this the "playing card edition" but that kind of implies some use of hearts and spades and shit and I haven't put that much thought into it. Maybe I could just sneak some terrible card game puns into the posts and that would count as a concept?

A relaxed fit linen dress. I bought one solitary piece on my trip to Mood (I found the whole place super overwhelming and almost didn't buy anything at all); a piece of raspberry red linen for a chilled-out summer dress that's been in my head for a while. My original pattern idea was a Papercut Sway dress, but I made a toile this past weekend and while I don't hate it, it's not good enough for a special piece of fabric like this. I'll keep looking.

A Named Kielo. Yeah, I thought I was done with these for a while too. Surprise! My green Kielo is one of my favourite things ever and I want to follow in its footsteps for this one: plain, comfy and unfussy while also being vibrant and unnecessarily glamorous.

A light jacket. I have a piece of printed terracotta twill which I'd like to turn into a cropped, probably unlined summer jacket that's more casual than a Chanel-type jacket but less casual than a hoodie. My instinct is to go for some kind of cotton moto jacket, but most of the patterns I can find are more complicated than I'd like for this project. I'll maybe see what I can do about altering one of them.

A denim Yoyo dress. I tried this before and loved it, but ended up having to recycle it because the fabric wrinkled so badly (and so permanently) that it was all I could see when I wore it. DVF is currently selling a red denim zip-front dress, and I've decided I want one too. I'm not going to copy that one (which would involve changing the shape and putting studs on it), just make a standard Yoyo with a few fitting adjustments based on my last one.

A ridiculous OTT kimono. My attempts at fancy loungewear so far haven't worked out, but I still want it, so I'm going to try a different direction. Last week I bought five metres of a lightweight black Italian crepe with giant peach florals and the Named Asaka pattern (thanks to their convenient 20% off sale) and I'm quite excited about it. I'm thinking I'll lengthen it at least a bit, possibly a lot, depending on how annoying it's going to be to alter the length of the neckband.

A viscose maxi dress. A few months ago I bought a fairly expensive piece of black viscose with a busy multicoloured print, and it's just revealed to me that it wants to be a maxi dress. I've ordered Butterick 5181, which is a really nice shape and I think ought to be a good match. I'm going to make the one with more coverage, but I am tempted to at least toile the strappy version at some point to see how it looks on me.

A jumpsuit or pair of high-waisted trousers. I want a black-based pair of trousers in a woven fabric that I can layer up with my wrap cardigans as I've taken to doing with one of my Sallie jumpsuits. All the cardigans I've made are super cropped, so my instinct is to make a jumpsuit to avoid the unexpected squished strip of flesh which invariably happens when I try to wear shorter tops with trousers, but I'm also open to just making a pair of ridiculously high-waisted trousers. I've ordered McCalls 7789 for shits and giggles, and if it doesn't look comical (it will probably look comical) I could definitely adapt it into a regular trouser pattern.

A black jersey dress. What I really want to do here is remake my black Vogue 9199 (which I'm not sure I ever posted here, actually), a dress I love in concept and can build a ton of different outfits around from spring through to autumn, but is made of shitty quality jersey that takes all the joy out of it. Finding the actual good quality black jersey is going to be the biggest hurdle of this whole plan, I think.

I'm interested to see how this plan goes, given my extreme lack of inspiration up until last week. Most of it is fairly simple; I didn't want to give myself a complicated project I wasn't in love with, so that's going to wait until the autumn. What I am going to do is try and start my autumn plan asap, since I find dressing stylishly for cold weather WAY harder.

Up next: Papercut Sway dress, in all its not-quite-rightness!
Posted by Jen at 10:00 2 comments:

spring sewing: the other things

Hi! I'm back from New York! We've had a great time - eaten and drunk far too much, caught up with friends, seen Come From Away which was phenomenal, rode on a strange light-up fish carousel thing, all the usual NYC stuff. I've now finally recovered from my jet lag and crammed enough vegetables into my body to calm it down a bit (is it a general thing for American restaurants not to serve veg with anything or were we just spectacularly unlucky?) and I'm ready to start thinking about sewing again. My summer sewing plan isn't finished yet due to a chronic lack of fabric (no, seriously) but I hope to have rectified that by next week.

For your amusement, here are a bunch of things I don't have enough to say about to warrant a post of their own! Some of these are from my spring sewing plan, some of them I just made because I could. This will wrap up everything I intended to make except Simplicity 8424 (which will get its own post) and the trousers (I've made a couple of pairs but I'd like to do some more work there before I post about it). 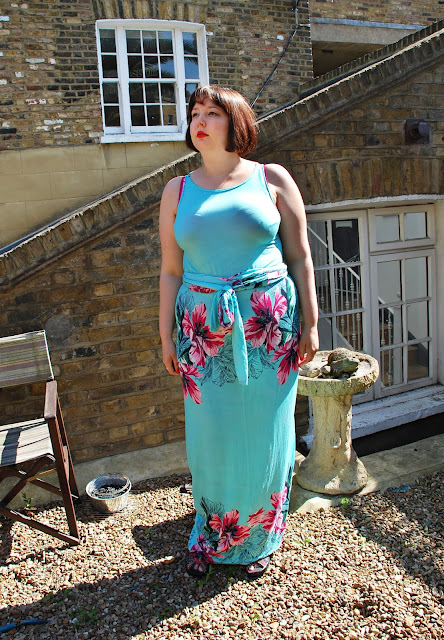 This is probably my least successful Kielo and I'm not entirely sure why. Maybe the fabric is too thin? It looks odd wrapped in the front the way I normally wear them and I much prefer the look of it wrapped in the back like this, but I'm not really comfortable actually wearing it that way because it's so clingy. This one is on probation right now. 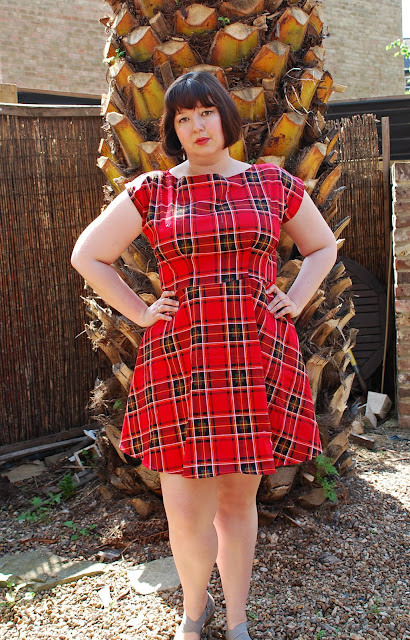 I bought this fabric to cheer myself up and to indulge Teen Goth Jen. This is an Anna/half circle skirt and I completely hate it, so much so that I got rid of it a week later. It's just not me in the slightest; even taking a few photos in my back garden I felt deeply uncomfortable wearing this. Teen Goth Jen will have to find another way to feel her oats, and having been reminded that I do actually like red, I will have to make myself another red dress in a style that fits Current Jen better. 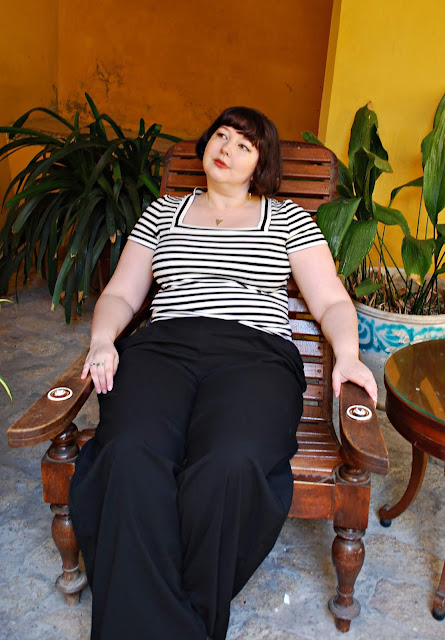 I really love this, but much to my confusion it doesn't seem to go with anything else I own. I'm going to try and work out why this is so I can find a way to fit it into my wardrobe.

(Also we took this photo in the grounds of our hotel in Seville a few months ago and that place was so beautiful it almost makes me angry.) 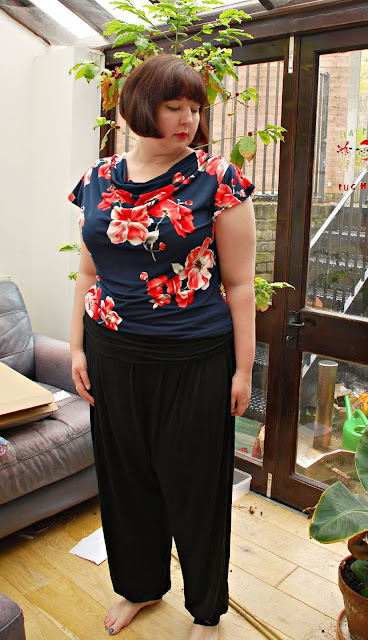 This was an attempt at exercise/loungewear. I like them in theory, but they are WAY too big. I fell between sizes and the pattern tissue told me in no uncertain terms that I was not permitted to cut between sizes or blend between them, without explaining why, which I found kind of weird. In case there was some sizing danger I wasn't aware of, I played it safe, cut the larger size and found that they nearly fell off. (Also it only includes a 6mm seam allowance, which seems weird for something with this much gathering?) I will have another go, but I'll probably size down twice. All of this has left me not hugely enthused about future Kwik Sew patterns, if I'm honest.

Also in the above photo I'm wearing a Simplicity 1716 cowl neck top. I've actually made three of these (one of which was a Christmas present) but I've never blogged them because I cannot find anything to wear them with. This seems to be a running theme with me and tops and I need to work out what that's about.