the Very Mild Experimentation series: going without a waist seam

In my last post I mentioned some suspect advice I'd read about green not being a good choice for someone with my colouring, and several people told me that was nonsense. I know it's nonsense (basically any saturated colour works for me, and it's muted tones and pastels I have to be careful with), but it's interesting how these generalisations are presented as fact and can easily get into your head. A little while ago I was searching for styling advice and kept coming across stern-voiced pronouncements on "The ONLY three silhouettes that work for your body type" and completely serious "50 things you should NEVER wear if you're over 30" articles that I genuinely thought had been parodied out of existence. And yes, it is nonsense. Yes, finding personal truth in one of these articles is basically akin to finding insight in a daily horoscope. Yes, it can all fuck off and rot. But it's insidious, all the same, and there are times when I actively need to fight against it.

All of which is to say, I'm taking the first step in my resolution to try some shit out and see what happens, and that first step is a dress without a cinched waist. 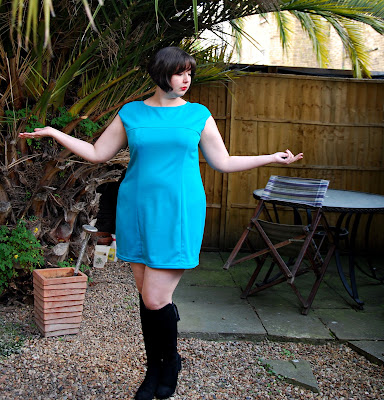 The only dresses in my wardrobe without close-fitting waist seams are wrap dresses with waist ties (and my favourite wrap dress pattern does have the close-fitting waist seam). This is cool, since I like my waist, but if I can have a wider range of shapes in my wardrobe then I'd like to. I'm unlikely to ever be the woman in loose-loose silhouettes or enormous slouchy sack dresses, but a slightly more relaxed look every now and again couldn't hurt. I picked Vogue 9196 because it still had plenty of seams and fitting lines, but no waistline and a nice relaxed 60s vibe that I thought I'd like to have a go at.

I am dressed exactly like the pattern envelope in these pictures; I already had the blue ponte and once I saw the illustration I couldn't get it out of my head. No, I didn't have to put the boots on, but why not go full dork, I always say. 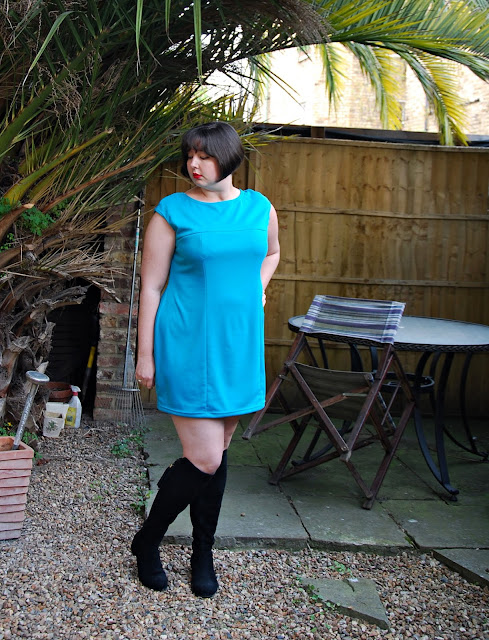 As you can see, I do still have shape in this dress. It's not meant to be completely straight up and down and I think I prefer it that way, since most straight shift patterns don't appeal to me in the slightest. When I was taking my introductory class at Sew Over It, the instructor pointed to a sample of their shift dress and told us that was the ideal next step in our dressmaking journey. All eight of us took one look at it and said, "Hahaha, no," and it was never spoken of again. The idea of a relaxed T-shirt dress appeals to me more, but I think that would take a lot of work to get right for my figure. I'm not opposed to trying, though. 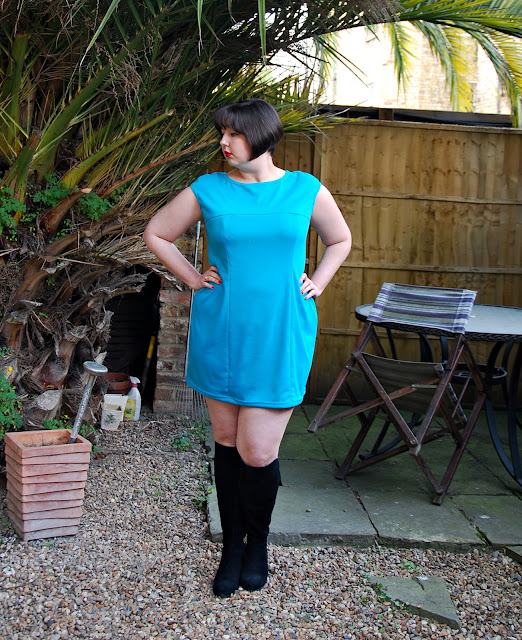 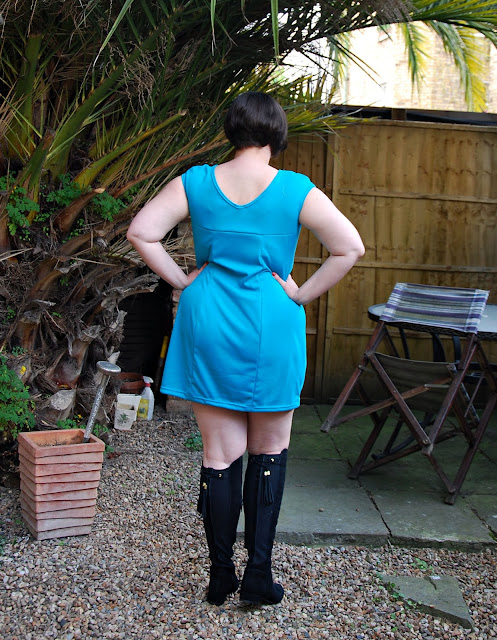 Ponte is one of the recommended fabrics for this dress, but it's mainly drafted for wovens and is meant to have a centre back zip. I had to do a lot of weird folding to get the pattern out of one metre of fabric whilst also cutting the back pieces on the fold, but I made the effort knowing I was likely to need the second metre for a second attempt. Which I did; the first dress had several problems. One, the armholes were too high and it looked weird. Two, the back V as drafted was way too deep for me. Three, I hadn't compensated enough for my narrow back and the dress had what I can only describe as a shower curtain quality from behind.

I recut the dress with lower armholes, a different back neckline, and two sizes smaller for the back pieces. I also took a few inches off the hem, because I wanted a 60s dress and the knee-length version had more than a whiff of sack about it. 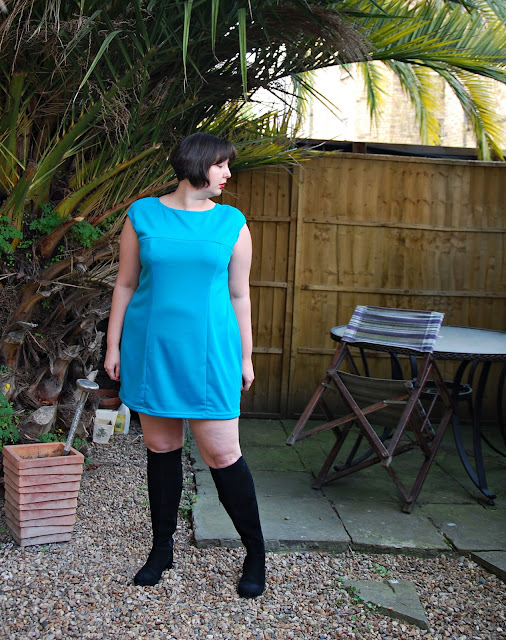 I love the colour of this dress, and in person I really like the way it looks. In photos the silhouette is jarring to me, probably because I'm so unused to seeing it. It hasn't put me off wearing it, though - it's easy and comfortable and put together, and with opaque tights it's a really nice dress for both dance events and general mooching about. Whether or not I make another one depends on finding the right fabric, but I'm definitely open to it. 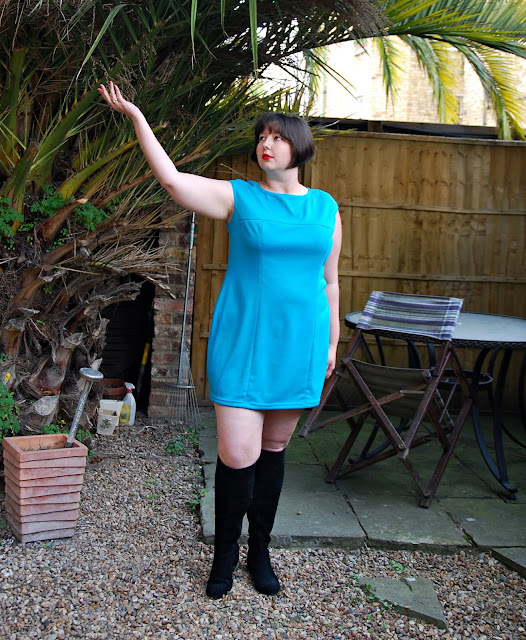 Aaaand some frond fondling to close. I tried to take a photo of me doing that arms down, hands pointing out to the side pose that a lot of sewing bloggers do when they're wearing something vaguely 60s, but in every single frame I had a face totally suffused with inexplicable fury and murder. I have learned my lesson and will not be trying that again.
Posted by Jen at 10:00 2 comments:

I've been talking myself in and out of buying and making the Kielo for ages. I thought that I wasn't cool enough to pull it off and it wouldn't work for my body type, and yet still I wanted it. I bought the pattern in January, talked myself in and out of it a few more times. But I'm interested in experimentation at the moment, and having a) received several assurances that it wasn't just a pattern for skinny bodies and b) realised that I didn't HAVE to make it in beige chiffon like the sample, I decided to go ahead and make myself a toile. 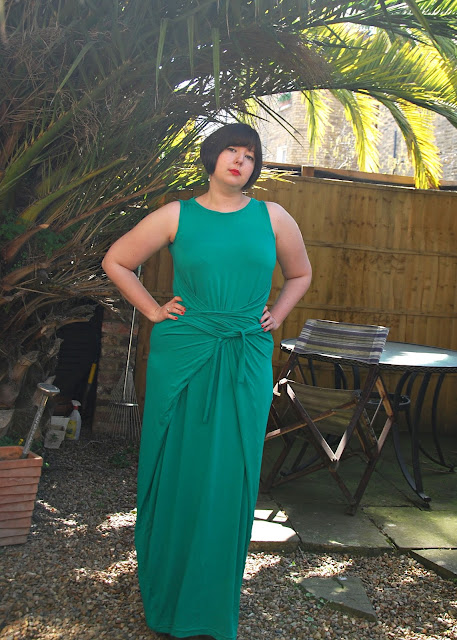 Here is my toile! Except it's not really a toile because I have been wearing the shit out of it since I finished it last week. I love maxi dresses and yet I've somehow only made one up til now, so I pounced on this one as soon as it was out from under the Gnome's presser foot. 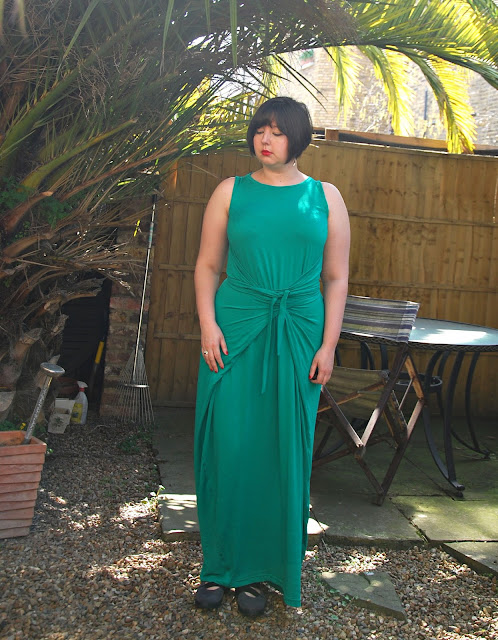 This fabric is a fairly cheap jersey I got from The Textile Centre, and it's not the greatest quality, but what it lacks in quality it makes up for in being an ACTUALLY NICE GREEN. I love green dresses, and when I started sewing I imagined making at least half a dozen of them, but I've never found fabric in a shade I like. It's always slightly too faded, slightly too dull, slightly too musty-looking. This still isn't quite the brilliant deep emerald of my dreams, but it was close enough for a casual maxi dress. 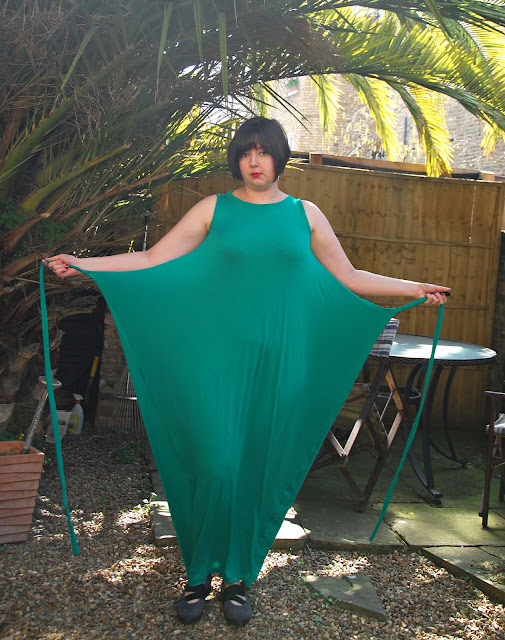 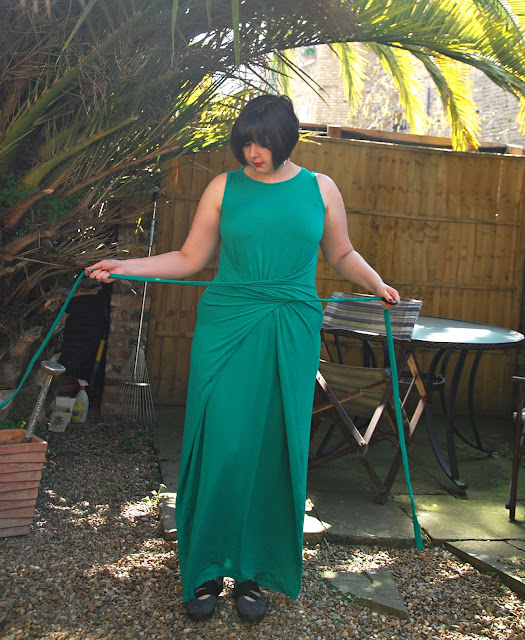 I had a hell of a time sewing this up. Since it's almost impossible to find nice green fabric, I've never needed to buy green thread for a project, so when I sat down to sew this up the only green thread I had was a spool from a rather suspect "BAG OF THREAD MANY COLOUR" that I ordered off the internet when I first started. My machine did not like this thread, and it didn't like the fabric either, but I was determined that the stitching on the back vent (which would be visible) would be done in the right colour, so I had a thoroughly frustrating time until I got the topstitching done, when I threw the thread away and replaced it with the next closest colour I had (dark teal, so really not very close). 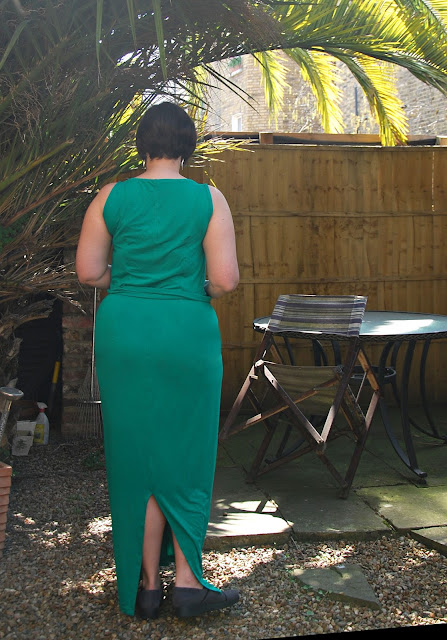 I got to the point where the dress was in a state to be tried on (i.e. after sewing the seams, before hemming or binding any edges), looked at myself in the mirror and went "OMG that's kind of amazing". It certainly doesn't make me look any smaller, and this jersey is extra-clingy to any bumpy bits, but it has this beautiful Grecian drapey effect which manages to look regal and casual at the same time. And it has to be said, my stomach is my least favourite body part and this style of dress tucks it away nicely without making it look like I'm deliberately hiding anything. I'll take a bit of lumpiness in the hip in exchange for that. 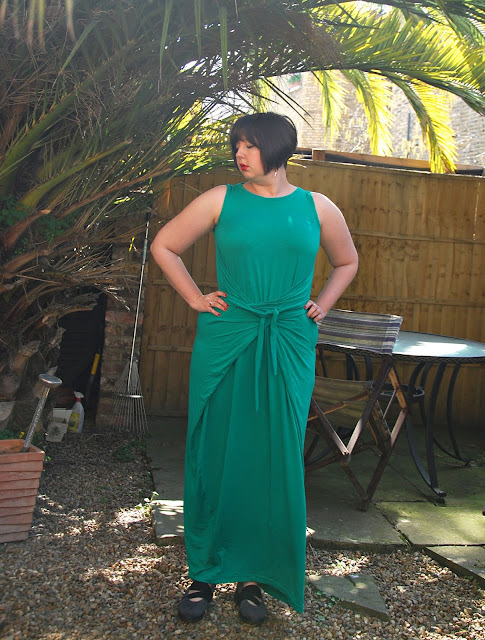 Also I LOVE this colour. I've read things in the past which say that someone of my colouring isn't "supposed" to wear green, but I think it looks great. Shrug.

Having decided the dress was potentially really good and not just a disposable toile, I put it to one side until I could get hold of some non-terrible green thread for the finishing. Actual patience and planning for once! Maybe I'm growing as a person. 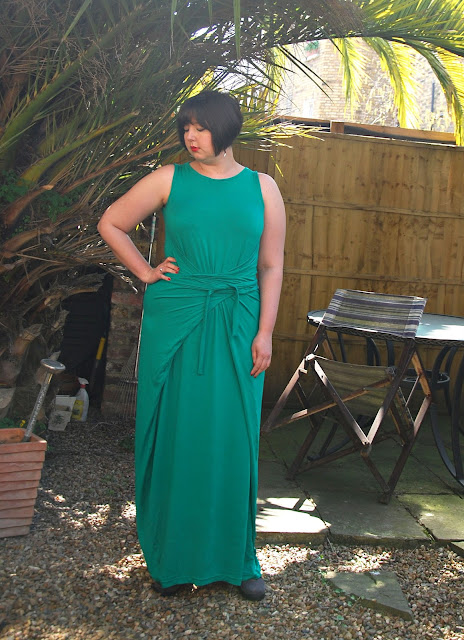 The one thing I really don't like is the finish on the armholes (I used jersey bands and didn't like the way they looked, so I topstitched them down to the inside). Part of that is my crappy twin needle stitching, but since that's probably not going to be any better next time I make this dress, I need to come up with another method. 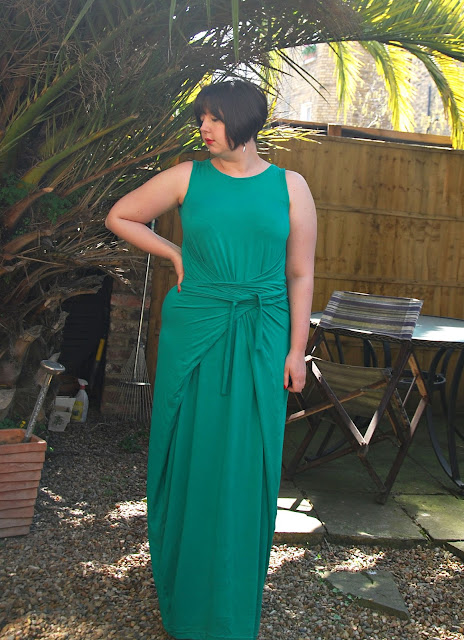 I will definitely make more of these. I foresee myself living in them (and maybe one or two other styles of maxi dress) when summer comes. I'm now not so sure that the red fabric will work, but I have some wide stripy jersey that I'd like to try it in. Honestly though, what I want most of all is some better quality bright green jersey to remake this one, because it's not going to last very long. Anyone have any ideas where I might acquire such a thing? 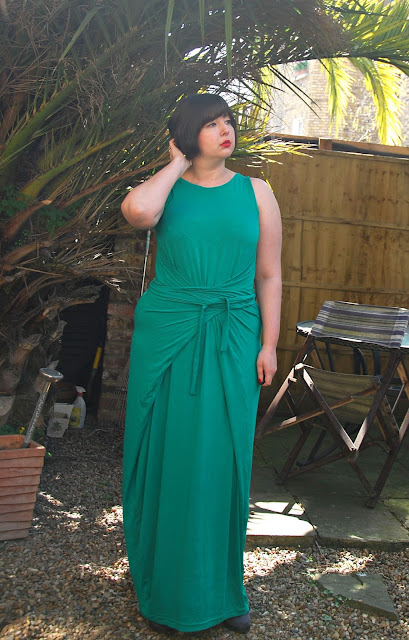 Conclusion: Kielo is not body type dependent. Go forth and be cool, all of you!
Posted by Jen at 10:00 5 comments: