While I do have a project to share today, and will continue to talk about sewing here, it would be unconscionable of me not to talk first about the fact that the American police have declared war on black people because they weren't allowed to keep murdering them in peace. I'm trying to walk a fine line here because it's black voices that should be front and centre here, not mine, but I know that my silence does more harm than good. I'm not gonna tell black people what to do or how to feel, but to my fellow white people I say: we have to acknowledge that until we speak on this we are Schrodinger's White Supremacist and we sacrifice the safety of black people for the comfort of bigots. I see you, white person rolling your eyes, and I invite you to get permanently lost. It's one thing to have a temporary refuge from the world when what's outside is a pandemic; this is not that. We are responsible, every last one of us.

If you are white and grew up being told to look for the nice policeman when you get lost, the nice policeman will help you, you may well find it jarring to hear Defund the Police and All Cops Are Bastards, but if you think it's "too much" then I urge you to do some reading. While you were being shown pictures of a nice smiling policeman, black people were telling their babies to stay as far away from the police as possible, you are always in danger from them even if you've done every single thing right. And they were correct to do so. If you go looking you will find thousands of stories - some more well-reported than others - that will horrify the shit out of you. Law enforcement in America is so fundamentally corrupted by racism both overt and institutional that it is broken beyond repair. Currently they are using their state funding to escalate peaceful protests, mace literal children, mow protesters down with their squad cars and blind people with rubber bullets. They managed not to do any of this when white people, armed to the back teeth, gathered en masse and screamed in their faces because they wanted to get a haircut. Think about that.

In the UK we can't call representatives to demand defunding of police or release of arrested protesters, but we can donate, we can educate the white people around us as to what's going on and why they, too, need to step up, we can read as much as possible, we can fight the racism inherent in our own system (we have a LOT of work to do). If things continue to get worse, and if we end up at the point where the US government is calling on other countries to provide aid and resources in their fight to subjugate black people, we will be their surest bet. We will need to be prepared to do everything in our power to prevent it.

My monthly fabric budget is going to bail funds. If you're also looking to donate you can find a list here: https://www.autostraddle.com/43-bail-funds-you-can-absolutely-support-right-now/

I'm going to draw a line under this here, and talk about sewing. I will continue to share resources and ways to help, as I find them, in future posts. I will be keeping a close eye on my comment section.

And now, we have a skirt. 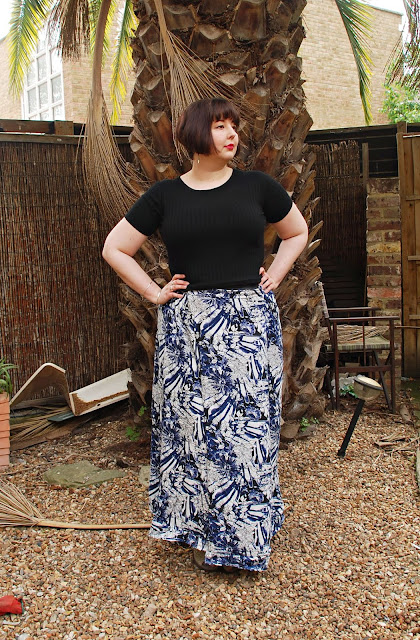 This skirt. It took me over a year to conclusively match it to a pattern and then several months more to get over my fear of actually sewing it. There have been too many times where I've sat on a fabric for ages and then the things I've finally made from it has been disappointing, and that's much worse than making something disappointing immediately. But last week I fixed determination onto my face and raced into the pile of fabric going "aaaaagggghhhh" until it was done. Before I go any further, I will say that I don't think this photographs especially well. It looks a bit stiff and tubular. In person it looks lovely, especially when it's moving, and will be really useful to me this summer. I'm just not wild about these photos of it. I definitely want to go back in and reposition the press studs (the pattern calls for buttons, but I will never use a button when there's any other option available to me) because the waist is not where the waist should be. I was worried about making it too tight and overcompensated. 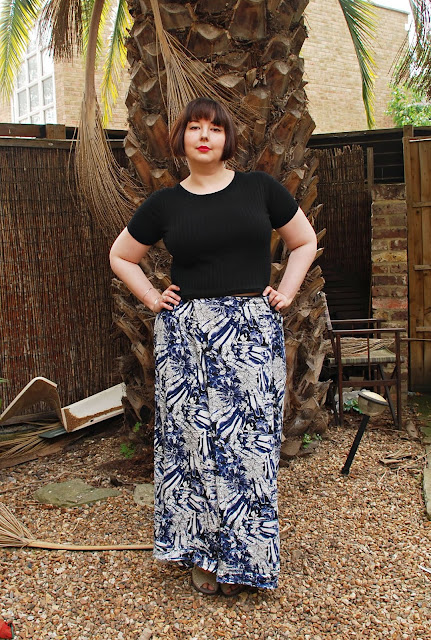 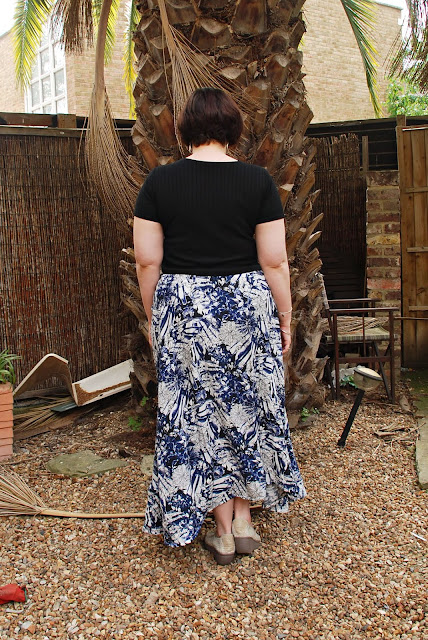 (You can kind of see in the back shot where the wind was picking it up a bit that it's actually quite flowy and pretty-looking. Maybe I should have waited for a more blustery day to take the photos.)

After seeing how the test skirt looked, I decided I wanted to try and make this version as long as possible. I wasn't confident about my chances as I only had 2.5m of fabric, but I gave it my best shot thinking I could always shorten it again. In the end I could only get enough length for a strange lower-calf hem, which I didn't like, but I had enough scraps left over to piece together a band to extend it down to my ankles. Not the most elegant solution, but now I have a skirt I'll actually wear. And almost no leftovers! I really like the pocket on this skirt. There's only one, on the left side, and it's big and deep and secure. I'm sure I've said before that a well-designed functional pocket is a huge plus for me and I will always go for a pattern that includes them over one that doesn't, but little afterthought pockets that don't really hold anything and don't work with the design or fabric of the garment are useless at best and offputting at worst. I truly do get the IT HAS POCKETS thing but demand more from your long-awaited pockets, people. I think I might well make this skirt again, though I would want to make some changes in the way I went about altering it. Something I would want to do for next time is change the angle of the front wrap - it's supposed to be a very clear diagonal but I couldn't have kept going on that line for this length of skirt, so I have some strange in-between thing which I think is contributing to the weird look in the photos. When I do this again I'll redraw the front wrap line. I think I would also want to change the side seam lines, either to be much more or much less flared. I wouldn't want to get rid of the flare altogether (when I've tried to make a wrap skirt with straight side seams it makes the coverage of the wrap somewhat precarious) but I think either a narrower silhouette or a ridiculous exaggerated thing would look better than this. 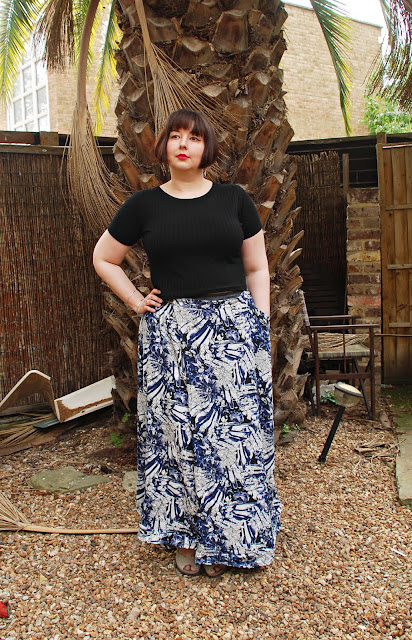 I have another maxi dress cut out and I'm hoping to get that done this week. My partner is having a truly awful week so most of my free time will be going to him rather than to sewing, but there's still a chance of me being able to run up a quick knit dress. If not, I will write something. Sending strength to the people who need it most right now.