McCalls 8117: Jen is every Spice Girl at once

Category is: things I made because I knew they would look ridiculous and thus would be amusing to me! 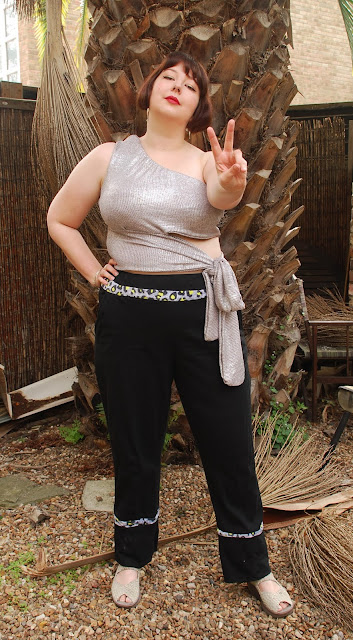 I freely admit I'm helping the All Spice Girls thing along by wearing it with leopard-trimmed tracksuit bottoms (and having vaguely Posh Spice hair all the time), but they happened to be what I was wearing when I tried it on for the first time and looked in the mirror. I tried to find a more appropriate pairing for this top, but there just... isn't one. At least not in my wardrobe. Sadly I own exactly zero pairs of moonboots. 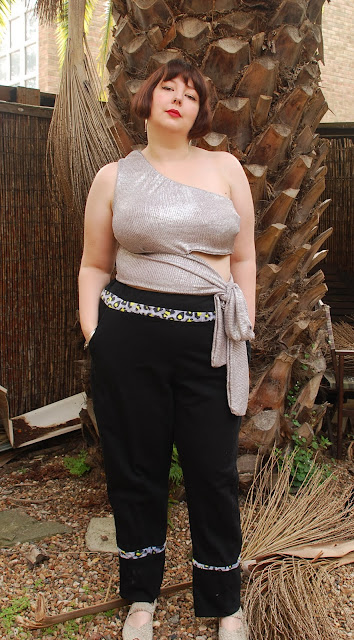 This is McCalls 8117 (they've also named it Heather, but... no thanks), a release from a few months ago that made me laugh for quite a long time. I don't make a habit of buying patterns because they're stupid-looking (the last time I did it was two years ago, and that doesn't really count because it was secretly a really great pattern) but this one was so hilariously overwrought that I couldn't help it. One shoulder! Asymmetric waist tie! Option for a peplum and/or one single long sleeve! Plus a third view that I thought I might actually like and wear, but we'll get to that. 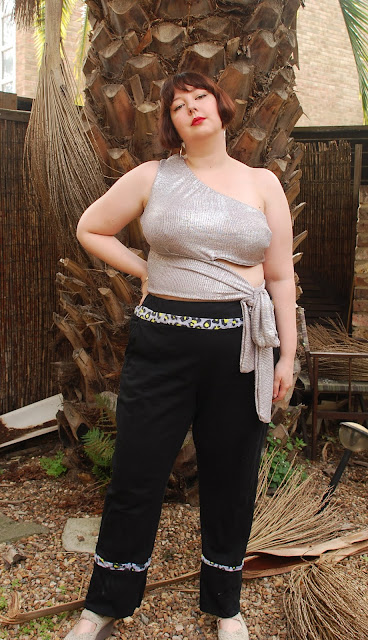 First of all, my thoughts on the finished product: I expected to get something so bad it was unphotographable, and instead I got something pretty bad but acceptable to put on the internet. I wouldn't call it a fail, since I was never trying to make something I'd actually wear, and I will probably keep it for comedy purposes/All the Spice Girls Halloween costume. This does not look good, but it is enjoyably amusing, and I do have some thoughts on the pattern that might be useful to anyone considering it.

The fabric I used is a piece of weird glittery rib knit that I got from the Abakhan remnant bins. I bought it thinking I was going to start incorporating shell pink into my wardrobe (which I'm still not opposed to), but I've never used it. It's too glittery for everyday and too dull for evenings. It was also an absolute bastard to work with - if the right sides touch at all they stick and I had to literally rip the pieces apart constantly - and I'm not at all sorry it's ended up as a comedy toile. 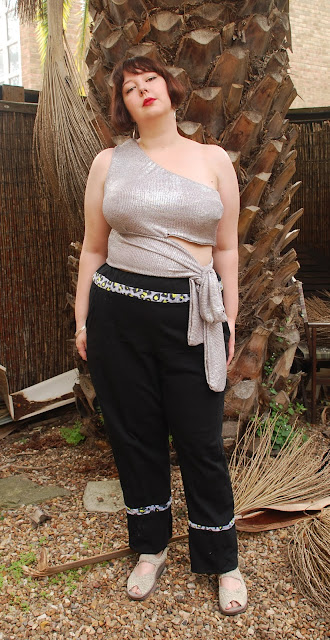 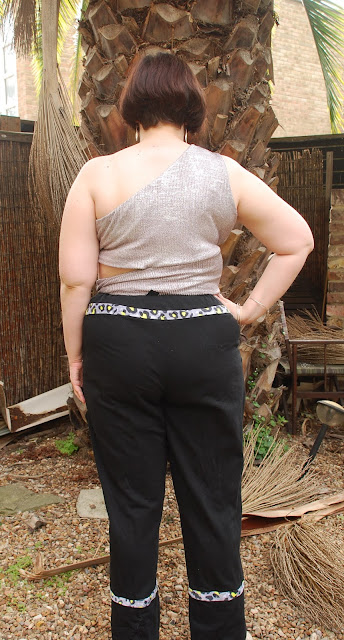 My original intention was to make the single-sleeve view (which I considered the most hilarious) but got view A and view B confused while I was sewing and ended up sewing the armhole and lining shut before getting to the sleeve. In retrospect, I'm quite glad. The top is fully lined so requires no hemming at all unless you put the sleeve on it, and hemming this fabric would have been... a job.

A piece of very narrow elastic is sewn into the neckline to get a close fit, and that works very nicely. What I would absolutely do if I ever made this again is to sew elastic to the seam under the bust on the left side. You can see very clearly in these photos how it's gaping (and these are the better photos because my underboob does not need to be on the internet) and if I lift my arms without due care and attention the entire thing can end up under my armpit. If I ever have occasion to wear this top out of the house I will definitely bodge a piece of elastic to the back of the seam. 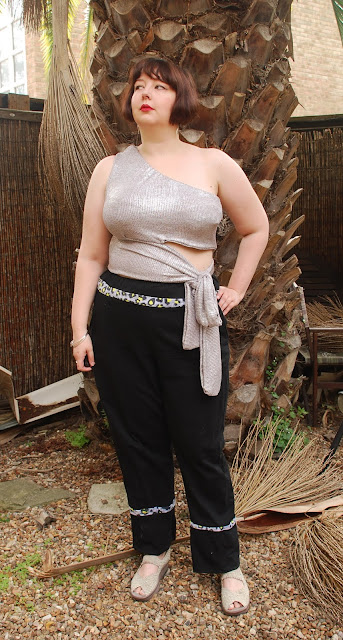 (As I went to take this photo my upstairs neighbours suddenly opened their bedroom window and I'd been really hoping nobody would see me dressed like this. Oh well.)


Would I recommend doing this? I mean, no. Clearly not. But I will say that purely as a sewing project, it was quite enjoyable. Not having to hem or bind necklines and armholes is a really nice change, and if you were prepared to do a bit of topstitching you could make the finish on this version completely clean. If one of my more... rave-inclined friends who fit a similar size asked me to make them one of these, I would do so quite happily. But only because I already own the pattern, I'm not suggesting anyone buy this expecting it to bring them joy.

Of course, I also wanted to try what I thought would be the actually nice version that I might get wear out of. You will very quickly see the problem I ran into. 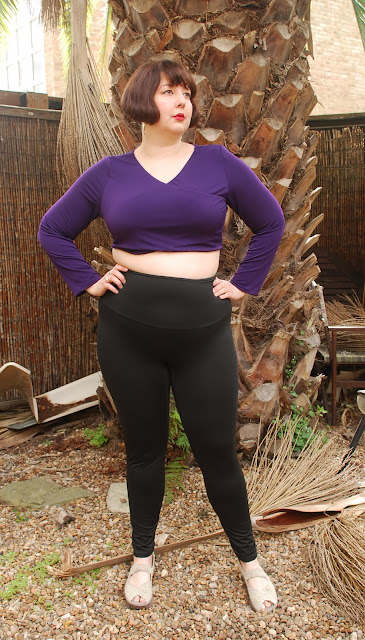 So there is no photograph or drawing of this view on a model, just a disembodied garment. From the disembodied garment illustration I assumed that the finished product would be cropped, but would end at, you know, my waist. Admittedly I have a much larger bust than the pattern calls for, but that's never really been an issue with jersey tops before. The effect you're supposed to get is a nice scallop where the two pattern pieces cross over at the hem, but there's not enough length for that so it just looks a bit like my bra is hanging out. 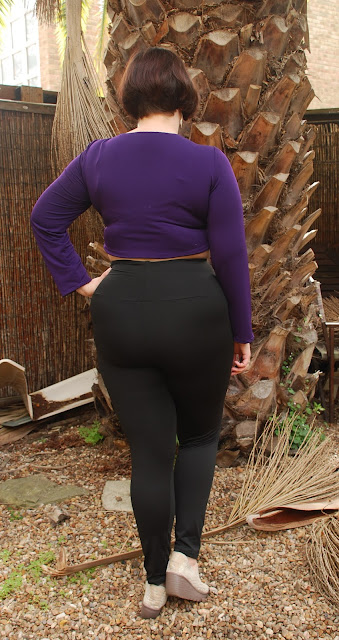 As you see, the back does sit further down than the front, but still not long enough to reach the top of my ultra-high-waist leggings. Lengthening the back is a simple enough task, but I'm not at all sure how to go about altering the front. I have no idea how you'd do an FBA on this kind of pattern piece, and I'm pretty sure that wouldn't give me enough length by itself. I'm also concerned that just making the pieces wider will result in weird flaps. I would possibly need to elasticate the lower front edges the same way as I would the first version. I'm not opposed to giving it a go the next time I come upon some non-precious jersey, though.

I don't mind too much that this version is unwearable. Mostly because this fabric (a super mega cheap jersey I bought to toile a different top) is the worst unbreathable poly I've ever encountered. I'm not a fibre snob, as a rule - I'm fortunate not to have the same level of extreme discomfort in synthetics as some of the people I follow - but this is just gross. It's September, I had this on outside for seven minutes with my entire midriff exposed, and I almost died. Shame, because it's a really lovely colour. More purple! More red!

I shall leave you with my best Posh Point. I went to a Spice Girls dance class last year, where the instructor exhorted us all to pick which one of the five we were and really embody her... then stopped three minutes later to scold some of us for not smiling. I heard at least two other people in the room making outraged noises and muttering "but I'm Posh! I'm clearly Posh!"

What's up next will depend on how this week goes. I got some sort of bug last week (not that one, we're taking part in a study so we've been tested) and it just wiped me clean out. Something I have been considering is writing something - designed to live in my menu bar for new people, but probably as a regular post first - about my body type and usual adjustments, as a reference point for readers wondering how relevant my experience with a pattern will be for them, so if I don't get a project finished that might be the next post. We'll see!