I think I might have mentioned once or twice that a few years ago I came into an unexpected fabric bonanza courtesy of my friend Emily's late mother. She made couture wedding dresses as a profession, and when going through her things after she died, my friend offered to let me pick through any bits of fabric that might be left over. I think we were both expecting some bits of white lace and maybe the remainder of a bolt of ivory satin. What I ended up with was a giant box (I could comfortably sit in it and pull it closed over my head) full of mostly silks, some linen and wool, and a few other miscellaneous bits, a combination of leftovers from bridesmaid/groomsman outfits and things Emily's mum had bought to make clothes for herself. It was a little treasure trove.

I took a couple of pieces back with me at the time, distributed some of it to other people, and the rest stayed at my parents' house where Emily had dropped it off. The box went missing for a while, as things tend to do when you put them in the attic, and was found again a month or so ago during a clear-out. I've now brought most of it back with me (though there's still another trip or two to go, including some more dupioni remnants and some sequinned Art Deco nonsense), and I thought it might be nice to share with you. Small disclaimer: all of this came up in two trips, and only the stuff from the first trip has been ironed as of yet. I promise the rest of it will get done before I put it away.

Here, then, are 25 pieces of fabric, divided up into vague categories: 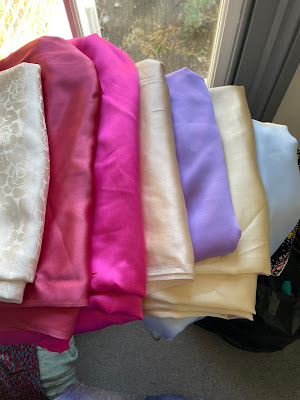 Here we have seven pieces of silk satin. I've arranged them here based on how much I have of each, going from least (the white rose-print silk, 1m) to most (the baby blue, 2.3m). I will freely admit that these pieces are, in general, not my colour, and I'm also a bit nervous about the super shiny stuff because it seems to be impossible to work with. If A list celebrities are turning up to the Oscars in custom designer gowns made of satin that's more wrinkles than fabric and hems that look like ass, what chance do I have? I imagine that at least half of these will end up as lining fabric, which is fine. 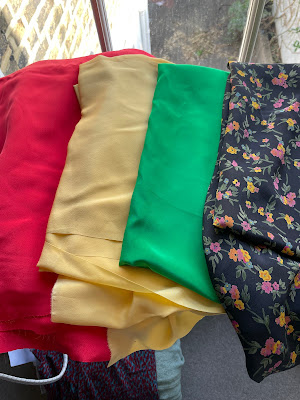 Here we have the non-satin silks, the category I'm most hopeful to be able to make into wearable things. So far I've established that the green is going to be a slip and the red, if there's enough of it, will be a party dress. I have 2m but it's quite narrow. The floral isn't really me at all, but I'm going to try to find a pattern that will let me do a 90s baby Goth Winona Ryder thing in the hopes that might vaguely coincide with my style wheelhouse. 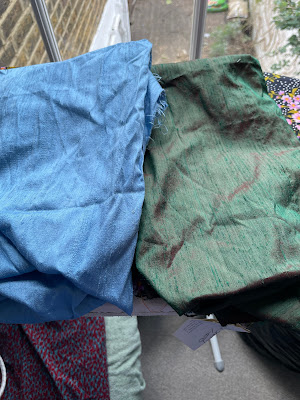 Two 1m remnants of silk dupioni. I also have a piece in lilac that's nearly 2m that will come to me in the next trip. I have no idea what to do with these and I really wish there was more of the green one with the burgundy shift. 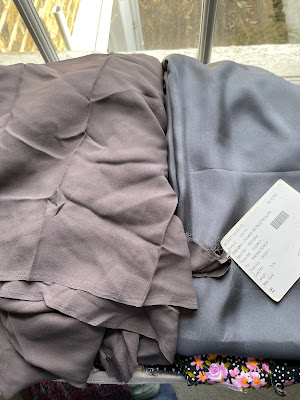 Chiffon and silk habotai. These two are both labelled "slate" and both from the same place, so I'm assuming they were bought to go together. My plan is to stick with that. I don't have enough for a dress (there's around a metre of each), so it'll have to be a top, and I'm honestly not sure I own any woven top patterns. 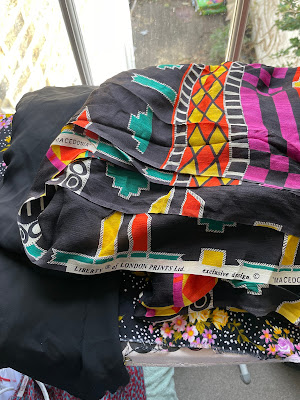 Two chiffons. The black (underneath) is basically going to be used as a practice piece before I use either the printed one or the grey above. The other is one I'm really excited about - according to the selvedge it's Liberty, and I have three and a half metres of it (the final half metre is a separate length). What I want, obviously, is a maxi dress, but that's fully contingent on my being able to semi-competently insert a zip into chiffon. We'll see. 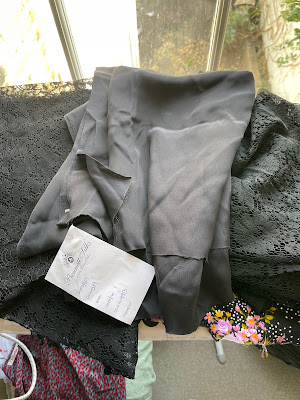 Two pieces of lace and a remnant of black silk. I'm assuming the black silk will be used in conjunction with one of these pieces, though it might turn out to be too short. On the left we have a piece of quite thick lace that I'm hoping to be able to cobble into a maxi skirt, and on the right an absolutely stunning piece of silk lace that might be one of the most beautiful things I've ever touched. I'm dying for it to be a dress, but I'm not sure there's enough (there's 2.5m but it's not an even width as something has been cut from one side). If I can't make a dress, I think I'll most likely try an oversized cropped sweater. 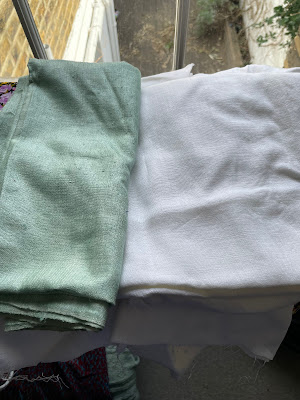 Two pieces of linen. The mint piece is just over a metre, and when I first got hold of it I was sure it would be a tulip skirt, but I've not been wearing those so much these past couple of years. I have two metres of the white and if it didn't feel so lovely I honestly would have left it behind. I don't wear white ever and also absolutely cannot be trusted with dye of any kind. I might end up using both pieces in the same garment if I can think of any mint-and-white outfit I might conceivably wear. 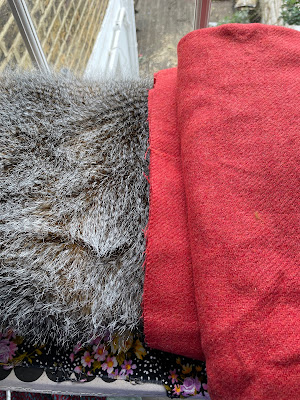 One remnant of coral wool and one remnant of amazing faux fur (there's no reason for these two to be grouped together other than they didn't fit with anything else and didn't seem to deserve a separate picture each). I'm hoping to use the fur to trim a winter coat at some point, but I don't have any ideas for the 1m of wool, given the "maybe I'm not going to wear a bunch of tulip skirts anymore" caveat above. 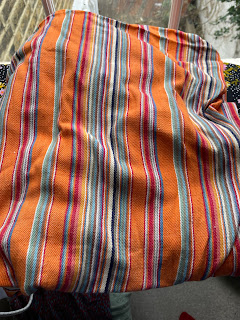 Finally, this deckchair-looking monstrosity, which of course I have more of than anything else in the haul (nearly 4m). It's quite a heavy cotton twill, though not heavy enough to actually use for a deckchair. I asked people about this on my Instagram stories because I was stumped, and the responses I got were overwhelmingly either dungarees or a jumpsuit. I can absolutely see the dungaree thing but would also absolutely never wear stripy orange ones, so a jumpsuit seems like the most likely bet. I don't even know if I'd wear that, to be honest. I'm going to ponder on this one a little longer.

I think it's going to take me a while to get started on this lot. Apart from the need to come up with actual project ideas and potential patterns, the sentimental and irreplaceable nature of it means I'm more reticent than I would normally be. I also know that it does no good to anyone just sitting in my cupboard, so I fully intend to get through all of it in good time. I would love any recommendations for what to do with any of the 1m cuts, or suggestions of dress patterns I might be able to fit on two metres of narrow silk or lace.

I'm still sewing pretty consistently, but also still having difficulty with the whole picture-taking thing. I have about half a dozen finished projects waiting for me to get it together. Hopefully I can manage it before we go on holiday - if not, I'll come up with something else to post!