Today I have for you a dress I made from my autumn plan, back in the season I was supposed to make it, and then never posted because everything went to shit. But here it is now! 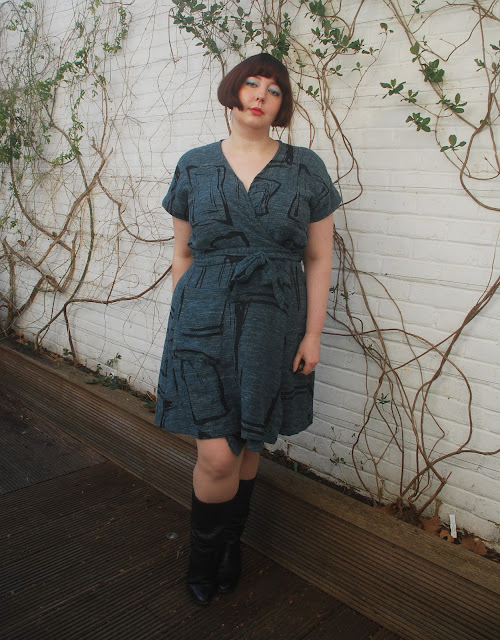 This is the shorter version of the Closet Core Elodie dress, in the blue linen you've now seen me post about multiple times. I could never find the right pattern for the maxi dress I originally intended this fabric to be, and having decided that the full-length Elodie would just be too heavy in this I went ahead and made a shorter version. I think this was the correct decision - I've worn this several times and on none of those occasions would I have been able to wear the giant one instead. And now I have a spare 2+ metres to make a maxi skirt that will let me have the idea of the original dress while also being a bit more versatile. 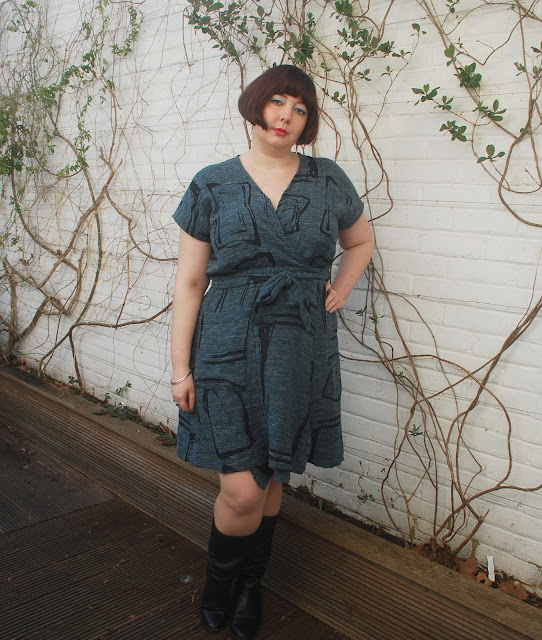 I said when I made my first version of this that I didn't like the neckline facing at all and would be swapping out for a bound edge on any future versions. I did that here, using the Victory Patterns Trina method, and while it's certainly better it does still gape when I sit down. I think I need to take a substantial amount of length out of the neckline. I'm actually considering taking the binding off this one, shortening it, and sticking some darts in to give the bodice piece a bit more of a shape. 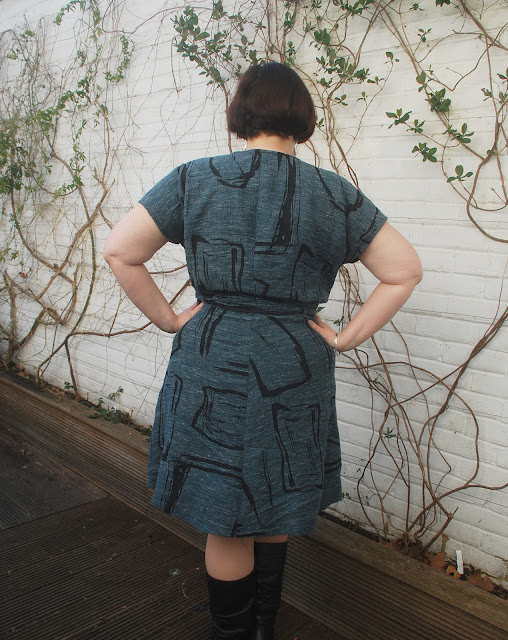 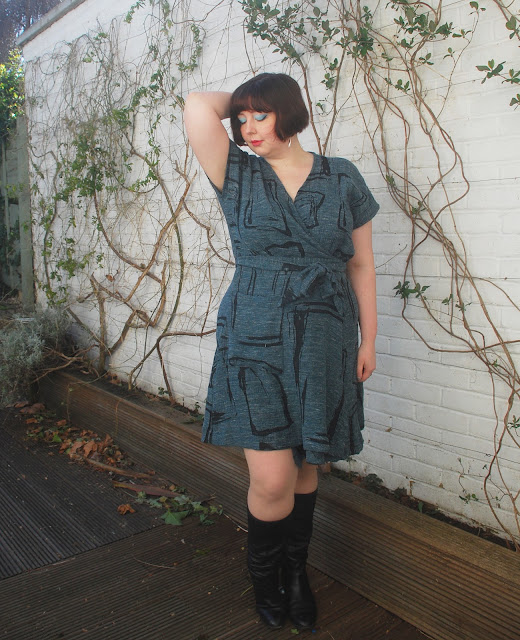 This fabric has enough structure to take a patch pocket, so I did put one on and I'm glad I did, it's come in very handy. I'm never going to be fully Team Patch Pocket, but it does work here.
I am a little surprised at just how casual this dress turned out looking. I didn't expect it to be fancy and in fact actively didn't want that, but I did expect it to be something I changed into to go for a nice pub dinner rather than a wear-whenever day dress. We all know I'm always a little bit fancier than the occasion requires and I did actually put this on and decide against it one evening because I felt too casual. Overall it's probably a good thing to have more clothes I can just wear; I've definitely got into a rut these past few months and have been wearing the same few things on heavy rotation. To begin with I just didn't have the mental space for outfit planning and was just trying my best to be functionally clothed, and now the rut has set in so fully that it's really hard to shift. My intention for April is to do some work on that. 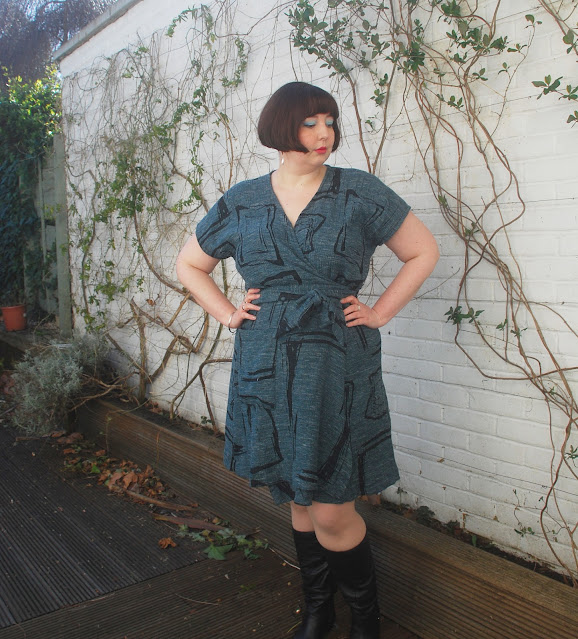 I'm not sure if I'll make this dress a third time. I might - I'm interested in experimenting with adjustments to the neckline to get the fit the way I want it, and I do think it produces a pretty dress. But this is not going to be a Kielo-type pattern that I make again and again. If I find fabric that demands it, I will do it. Back in autumn I suggested I might use my green and orange floral satin-look viscose to make this, and I've now concluded that would be a mismatch. I think that fabric demands a pattern with a little more shape. 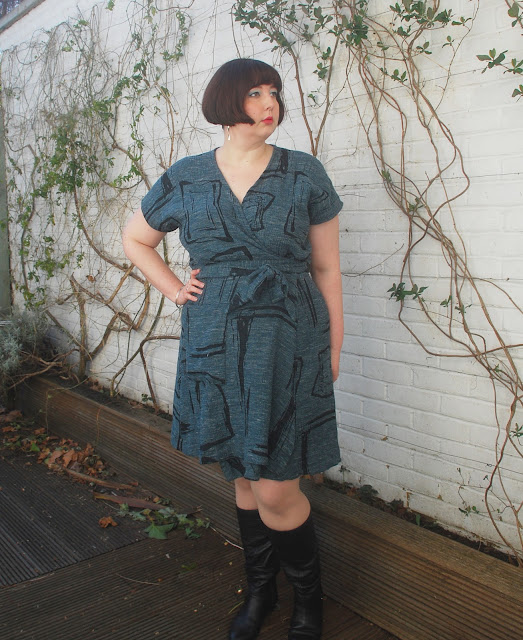 Life on meds means that I've been working in smaller but more consistent chunks, and I have a few more things finished and waiting to be photographed. The weather has been better recently so progress has been made on the giant piles of detritus in our garden, and I'm hoping that within the next week or so I can regain access to the very back section and take photos there. I love this garden so much more than our last one, but there is no easy palm tree focal point here and it's been a real pain trying to get photos with an OK background and vaguely consistent lighting (the current bane of my project-recording existence. You may have spotted). I think the back wall is going to be a much better shout for now. I will be back, probably mid-month before we go on holiday. Hopefully with photos of something.
Posted by Jen at 10:00 2 comments:

I've decided I want a spring sewing plan. I wasn't going to make one this time, to give myself a bit more freedom and flexibility, but I'm now thinking the structure might be helpful. This plan is shorter than usual, because I don't want to overwhelm myself, and I'm writing it with the full expectation that some of this stuff won't get done and some other random stuff will. I've divided it into two categories: the first is projects I have all the supplies for but maybe not as much driving motivation, and the second is projects I'm really excited and inspired to make but haven't got all the stuff for yet.

Section A: Things I have fabric, pattern and notions for

I know, I'm years behind on the whole lemons thing. Most sewing people got lemons out of their system three years ago. When it was everywhere I went back and forth on it - in some ways I liked the idea, but I worried I might find it sat on the wrong side of the novelty print line when it was actually on me. Also everyone was making these whimsical dresses and I, a decidedly not-whimsical person, couldn't see past it. (I thought all the dresses I saw were lovely, this is not shade. They just weren't me at all.) But last time I was in my local fabric shop I ended up buying a couple of metres of navy lemon-print cotton, and I'm going to make this dress again and hopefully stamp around Spain in it like a tourist: 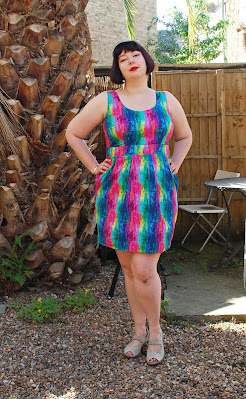 A pair of cords

I keep saying this, and it keeps not working. So what I have done is slowly accumulated enough cheap cord I don't really care about to make four pairs, so that I can experiment and do large-scale fitting adjustments and hopefully, eventually, come up with something that works. I'm starting with the trouser block I made a couple of years ago, and a couple of different waistband options.

I made a dress out of half of that blue linen I've been trying to use up for years (it's finished and photographed and I'm in the process of writing up the post), and I think the other half is going to become a Fumeterre skirt, with the modifications I made last time. The only thing I need to do before I start this is work out whether or not I make any changes to the waistband to provide a bit of flexibility. I love that yellow skirt but I've been having a lot of issues with bloating since starting my meds and can't wear it out to dinner anymore. I made a second version with a bit of elastic in that gets a lot more wear but also undeniably looks worse. Decisions, decisions.

Section B: Things I would really like to make but don't have the stuff for yet

I have a family wedding coming up in June and I'd like to make something new for it. I think it will mean a lot to the couple in question that I put thought and time and effort into celebrating with them. I'm assuming I'll use a pattern I already know well, but this particular project is very much going to be led by the fabric. I'm looking for something very traditionally "summer wedding guest", no white or black, that I like, and that generally conveys joy. It's very much a "know it when I see it" sort of thing and the pattern is going to have to bend to whatever I find.

I made this bathrobe in 2018 and though I do still wear it occasionally, the main fabric really hasn't held up at all. They called it French terry and it absolutely is not. If that fabric arrived on my doorstep now I'd consider it basically a write-off and probably make some oversized sleeping T-shirts so it didn't go completely to waste. The robe now looks horribly schlumpy and I only wear it for fifteen or so minutes between shower and pyjamas on the very coldest days of the year. I would like a nicer bathrobe. A great big fancy fluffy one that I could do pedicures in and shit. I don't yet have fabric or pattern for this - the pattern I used last time was M7516 and I will never use it again. I've seen what I think is perfect fabric on Fabric Godmother but I don't have the money to buy it immediately, so I'm gambling on it still being there next month.

I'm going to leave it at five things, rather than straining to reach a longer plan. There's still a bunch of stuff from my autumn plan that I'd like to get done, but I don't want to officially carry it over because I don't want to feel like I'm trying to "catch up" (which has happened in the past and stresses me out to the point that I don't sew anything at all). The most difficult thing to do, I think, will be the cords - I have had many failures there and I don't have any particular faith in this block - but I'm hoping that preparing for multiple versions will help set my expectations and allow me to treat it as an ongoing fitting challenge rather than a failure if (when) the first one doesn't work.

As I mentioned, my blue linen dress is done and photographed, so that post will be coming at some point in the next couple of weeks depending on how difficult it is to write. I'll see you when I see you!