Deer and Doe is my latest pattern company crush. I've spent a lot of time over the last month or so looking at their website, dreaming about buying a good 50% of the patterns on offer. There are some really lovely design details, and also I love how happy all the models look. It's some of my favourite sample photography. I'd been managing not to splurge on them, but then Brexit happened and I got sad and drank absinthe and discovered the next morning that I'd apparently ordered several patterns from France because YOU CAN'T TAKE EUROPE FROM ME, BASTARDS.

I bought three patterns for my first go: the Belladone, a dress I've seen made a lot; the Lupin, a cropped jacket that seems to be exactly what my wardrobe needs; and the Chataigne, a pair of shorts which I could very easily have done without. And yet it was the pattern that called to me the most. I wanted the exact pair of grey shorts that the model is wearing, and I wanted to wear them with black tights and boots like some sort of cool person. Copying a sample directly is not normally my thing, but I wanted those shorts. Also one of their models is super pear shaped (and beautiful) so I could see they'd look OK on me.

First experience with Deer and Doe? Could not be more pleased. 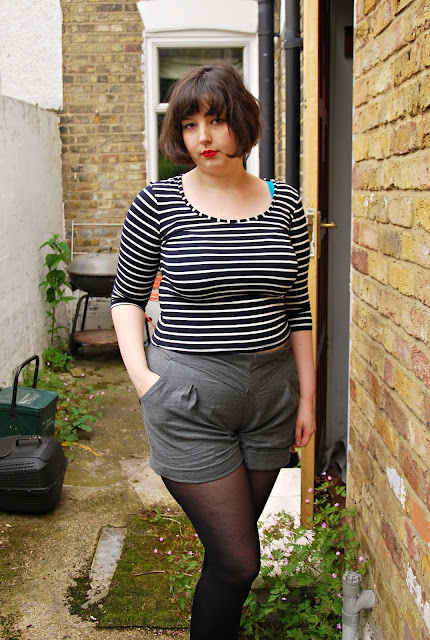 (I realised halfway through taking these pictures that my insistence on standing bevelled in all photos is fine for skirts, but in shorts and trousers it does weird crotch things. Witness my attempts to find other poses.) 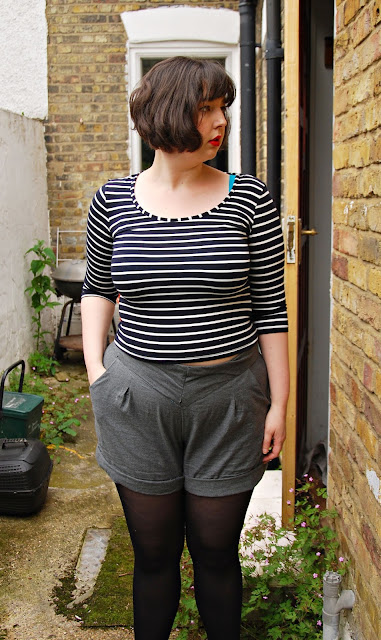 There. Not awkward at all.

The fabric is left over from my grey tulip skirt. I had to squeeze to get the whole pattern into the remnant but I managed. I made view A, the regular waist with the cuffed legs. This is about where I like my waists to be, so I probably won't have a go at the high waisted version unless I need something to balance my boobs on. 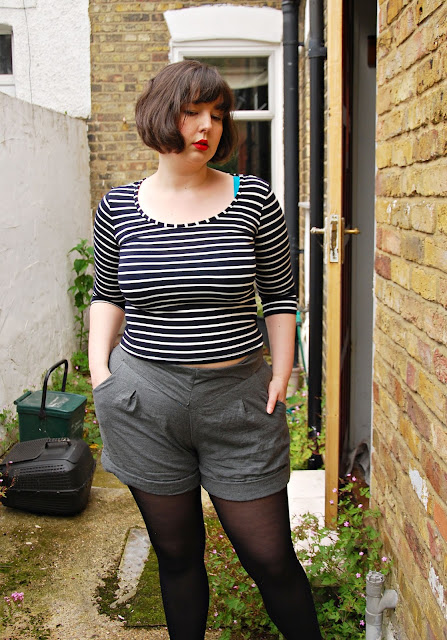 Deer and Doe has quite a narrow size range and technically they don't go up to my hip size, but their styles are almost all pear-friendly with extra room in the hips. There's about six inches of ease, which is quite enough to comfortably accommodate my extra curve, so I cut out a straight 46. This was fine, there's loads of room. 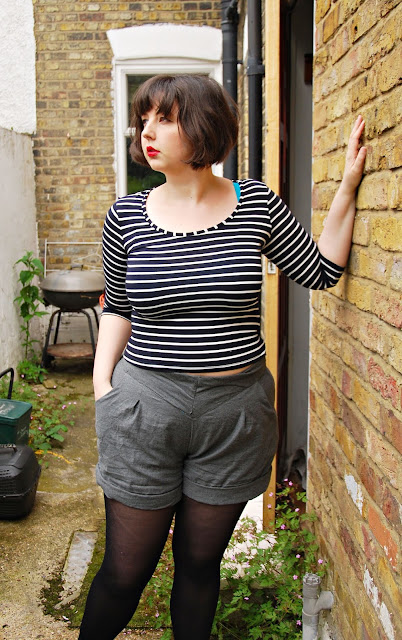 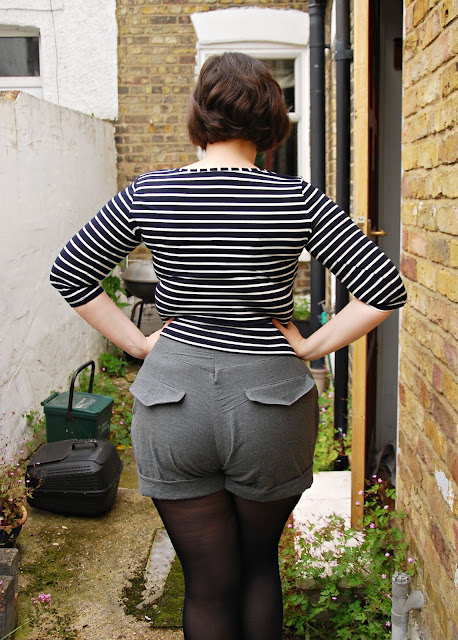 Real pockets at the front, fake pockets at the back. The shorts close with an invisible zip down the left side, and I'm pleased with how actually invisible the zip is. My invisible zips were fine until I got this fancy new machine, but then I got all paranoid about accidentally sewing through the zip teeth and started moving the needle further and further away. After this and my fuchsia skirt, I think I've finally stopped that. 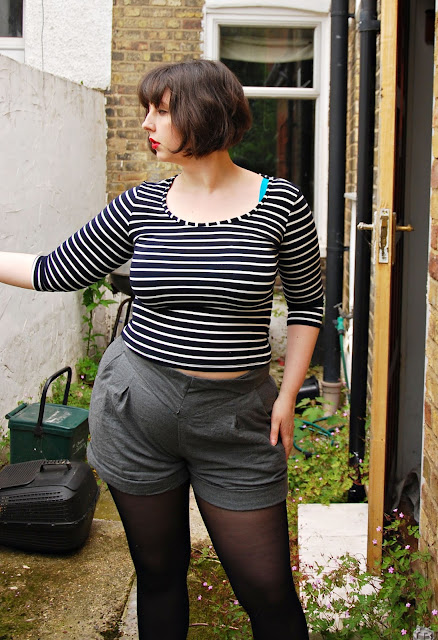 The only problem I had fit-wise was that the waistband was way too big at the top edge. I took out a reasonably hefty triangle at the centre front and centre back and it was fine, which is why I have a line at the centre front of my waistband when the pattern doesn't. For any future attempts I'm going to try and alter the pattern pieces so that they're smaller at the top and I don't have to put in this random seamline. It doesn't bother me that much, but it would still be nice if I didn't have to have it. 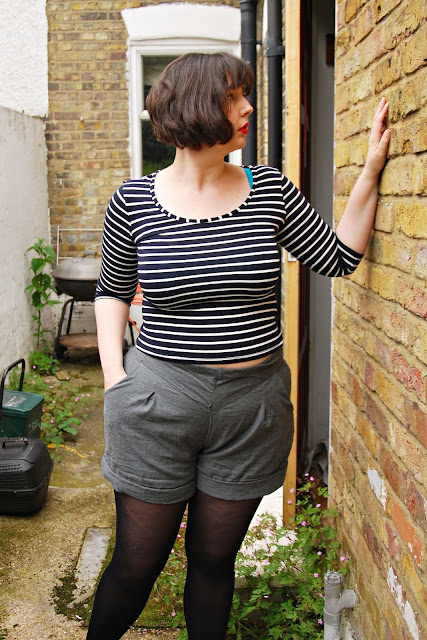 I am very excited about making more of these shorts, and more Deer and Doe in general. I can think of another two or three of their patterns I'd like to purchase immediately on top of the other two I already have. I'd love a Centauree as a summer dress, even if the amount of summer we're likely to get probably doesn't warrant it. Dammit, Britain.

And finally, to cheer myself up, another dance party. You can't stop me. 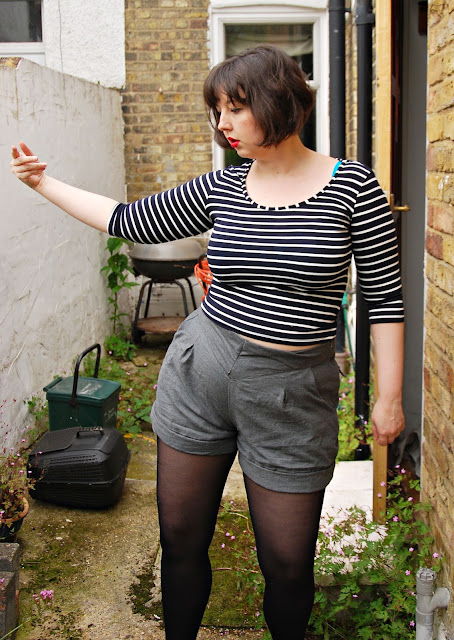 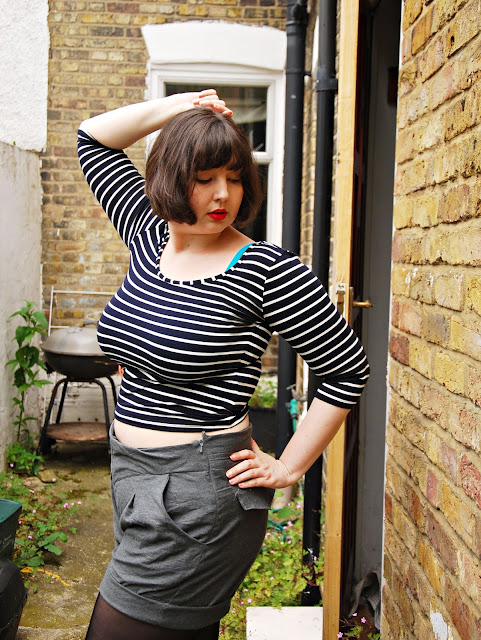 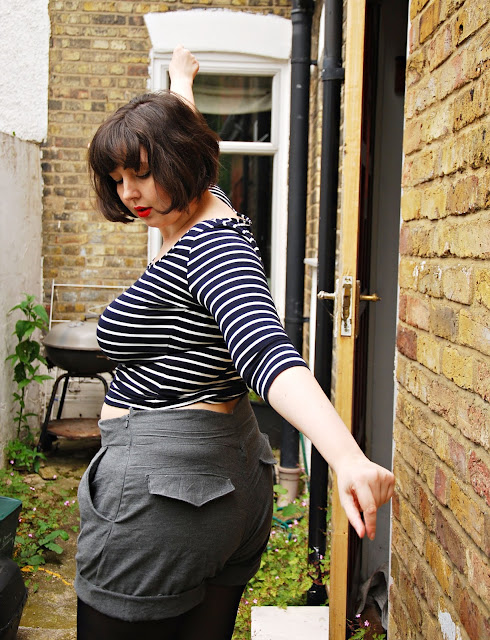