two versions of the Sirocco jumpsuit

Last month Deer and Doe got in touch to ask if I'd be interested in an advance copy of one of their patterns in exchange for a review. I've done this with them once before and it was really interesting for me; I got to try a pattern that I never would have purchased, and though I rarely make the full dress these days I do use bits and pieces of that pattern almost every time I make a knit project. So I was excited to do it again. Then I scrolled down to the photo of the garment they were offering to send and I realised this was a whole other kettle of fish - a pattern I would have fallen out of my chair and purchased within seven seconds of first seeing it. I sat gently bouncing for about forty-five minutes then told them I'd love to. 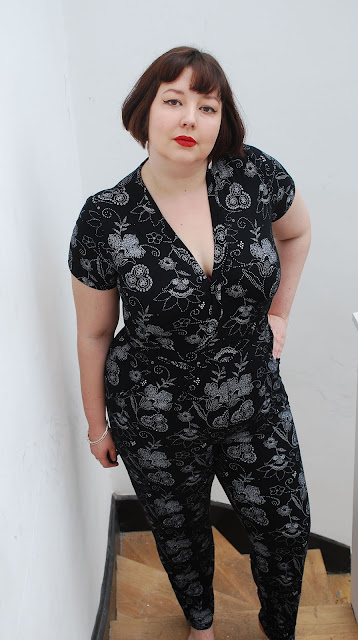 You know I love a jumpsuit. If you were here in January, you might also be thinking, "My, that looks a lot like a faux-wrap black jumpsuit that could be worn for evening occasions and probably won't have upsetting pocket situations". And yes, I thought that too. It's a knit rather than a woven, but that doesn't remotely bother me. My longtime favourite RTW black jumpsuit was also a knit and I loved it.

While my endgame garment is made of plain black, high quality jersey, I will never just cut straight into expensive fabric for a new pattern. I went to Walthamstow (because of course I did) and bought this soft medium weight jersey with the amount of stretch dictated by the pattern instructions. White paisley outlines are not my usual jam, largely because paisley is so much Patrick's thing that I feel a bit weird wearing it, but the actual substrate was so nice that I decided to deal with it. 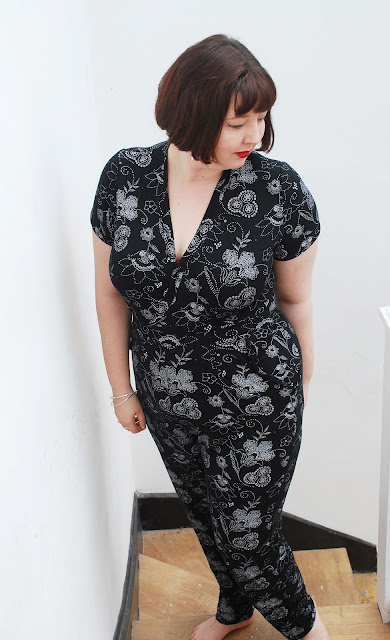 The pattern is a faux wrap, pull-on jumpsuit with a waistband panel, set-in sleeves and slash pockets. The bodice and trousers both have front pleats, and the trouser pleats are diagonal to mimic the shape of the pockets, which you can't really see in black printed fabric but is a really nice touch. I cut a 44 in the shoulders, 48 bust, 46 waist, 50 hip and 52 bicep. This is not what I'd cut next time, as I'll detail a bit further down. I also added two inches to the length of the legs, which is fairly standard for me. 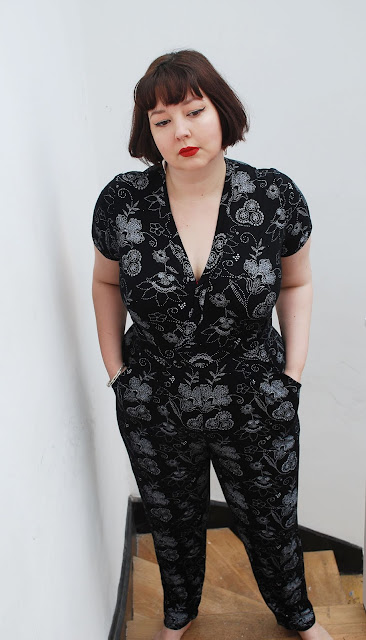 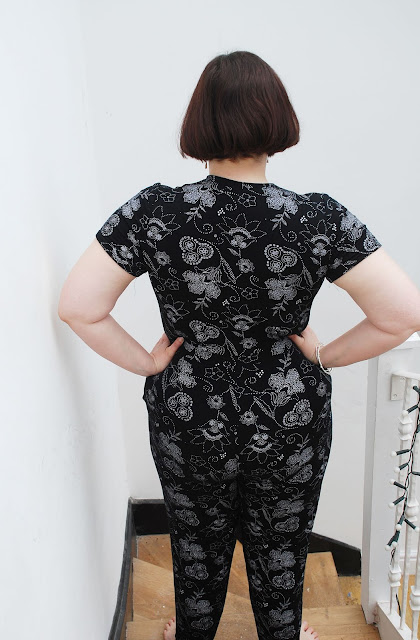 First things first: this is a really fabulous jumpsuit and the shape is great. I've never made a narrow-leg jumpsuit before and I was a bit concerned that it would be too body-con without extra fabric in the legs, but it's not a problem at all (full disclosure: it kind of is a problem right now because I've been stress-eating for the last month and I'm pretty bloated, but in these photos from a few weeks ago it's not a problem, so I think I'll be fine once things stop going wrong). I think it would be really easy to make this either casual or fancy depending on fabric or even just styling.

Usually with knit patterns like this there's a piece of elastic at the waist do all the fitting work, but not here; the pattern uses pleats and darts (darts on the back trousers, pleats everywhere else) to give proper shape on both the bodice and trousers going into the waistband. It's great to have a jumpsuit with a sleek "this has been fitted to me personally" effect but also still made of knit so it's super comfortable, doesn't need a zip and glosses over any little bumps. It's unlike anything else I've seen and I think it's awesome. Also worth noting: the pockets are functional, stable, and roomy. Finally! 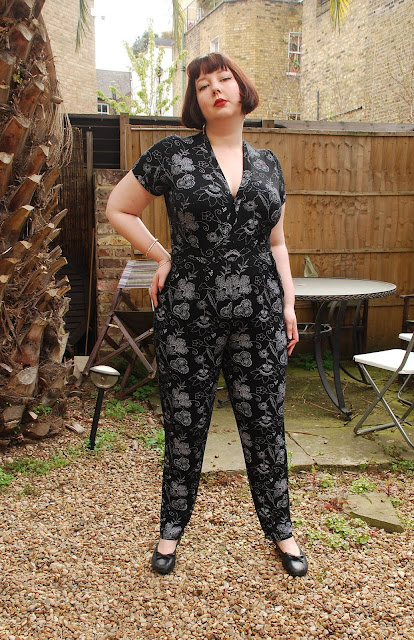 (SCENE CHANGE, surprise. I thought it made sense to do both so you could get a better view of the top while also being able to see some proper front-on shots.)

For people with similar body shape to me, there are a couple of things to be aware of. First of all, spend a bit of time baste-fitting the bodice and getting the surplice to lie correctly. I don't tend to do this with knit projects as the stretch usually glosses over any fitting issues, but my first attempt at this pattern had the entire middle of my bra visible. I think this is at least in part a result of my cutting too big a bodice. I don't normally add boob room with Deer&Doe, particularly not in knit patterns, and I'm not quite sure why I did this time. I should have just let the stretch do the work and maybe raised the neckline a small amount. I unpicked it to try and cross the wrap over more, but I reached the point where I was just making holes (unpicking black stretch stitches from black fabric, ugh) so I added as much to the crossover as I could and then added a couple of tiny poppers at the bust. Ordinarily I would just sew it closed at the right point, but you can't do that here as the wrap fronts being unconnected to each other is what provides enough room to get in and out of the jumpsuit. 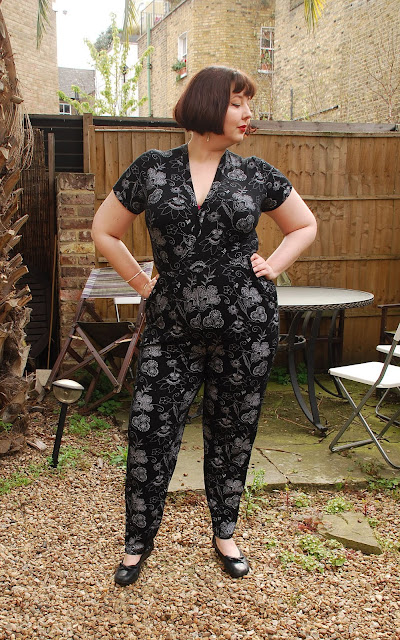 Also on getting in and out of the jumpsuit: there is no zip, and the waist is not elasticated. Additionally, the earlier version of the pattern I was sent called for 30-40% stretch, which has since been corrected to 60% stretch. The first time I tried this jumpsuit on, I definitely heard a few stitches pop. It's entirely possible that I'd still have the same issue with the corrected amount of stretch, since my hips are a few sizes bigger than my waist and the waist is drafted with negative ease, so before I make my third version I'll do some calculations and report back on how the extremely pear-shaped might fare with this! If you're worried, go up a size in the waist - it'll give you an extra couple of inches and still fit with negative ease. I did this with my second version, which you'll see in a moment, and the fit was much the same. 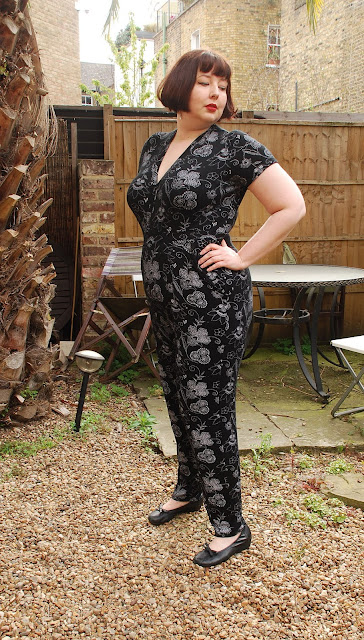 Having produced a garment I really liked but needed some adjustments, I decided that it would be worthwhile to make a second attempt, so that I could test the alterations I thought would be necessary and give a better and more comprehensive review. I'd never made a playsuit before and I thought this was as good a time as any to experiment. 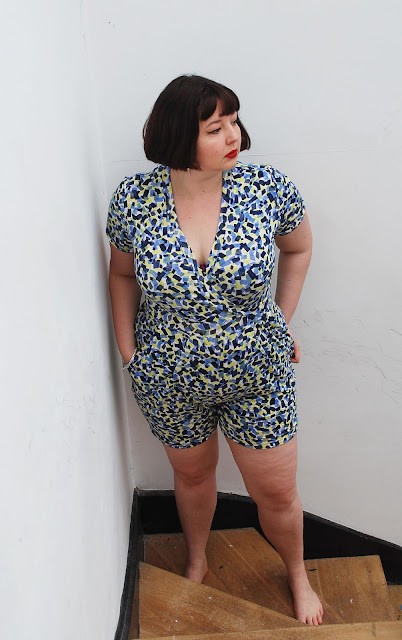 This time I cut a straight 44 bodice, with a little extra room at the upper edge of the wrap and an inch of extra length at the waist edge to give me more leeway overlap the front pieces further. I went up one size to a 48 waist to give a bit more room to stretch over my hips; I was still working to the 40% guideline on this one and so in the future, with a properly stretchy fabric, I might not do this. As I said, I'll do some maths before the next one! I also cut way more length than I thought I'd need on the shorts; I do this basically every time I cut shorts because my fabulous monster fabric-eating thighs are not what people tend to draft for. I marked the cut point on the fabric so that I would be able to see how much I'd added at the end, and it was about 2.5 inches, so that's what I'll be working to in future. I kept everything else the same. Were I to make this playsuit again I would definitely widen the legs - I am not loving this overall effect. I'm not 100% sure if this is another monster-thigh problem or not. The photos on the website show wider legs, which would imply that it is, but previous trouser patterns I've owned that have both a short and full-length version are drafted to be wider at the cut-off point on the shorts than the equivalent point on the trousers, and these aren't. Something to bear in mind! 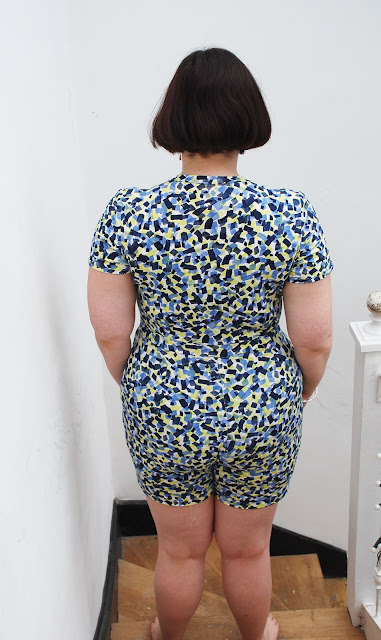 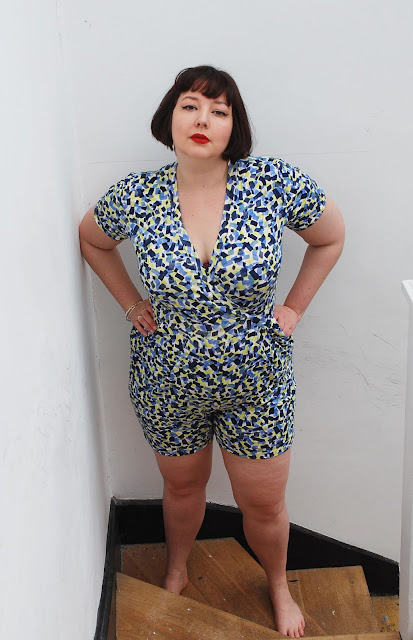 Attempt two is definitely a much better fit. There is a small amount of bra showing in these photos, but I am standing right at the bottom of the stairs with the camera pointing downwards, so it doesn't normally look like this. However, I really doubt I will be wearing this version. The colours and print of the fabric just aren't me at all, and I don't like how tight the legs are. The fabric also clings way more than in my other version and I'm not a fan. I will almost certainly have another go, however; I really like the idea of this playsuit and I don't think it'll be too hard to adjust it into something I'll love.

Overall, this has been a rousing success for me and I will definitely be making more of both versions. Aside from the plain black jumpsuit of my dreams, I'm also thinking about both a playsuit and a jumpsuit for generally existing in during the summer. I like the idea of electric blue for the playsuit and possibly some kind of leaf print for the jumpsuit, depending on whether I can find a fabric that fits the nebulous idea in my mind. There are definitely a couple of body shape issues at play but they're fairly simple to work around, I think, and having made these two versions I'm pretty confident that I know what I'm doing. I'm thrilled I got to review this pattern and I'm excited to have it in my wardrobe! 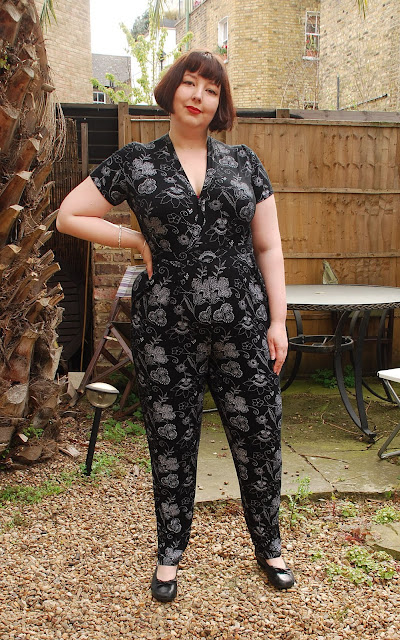 Fabric: Printed jersey from Walthamstow Market
Cost: £5 for the jumpsuit, £4 for the playsuit
Pattern details: Pull-on knit jumpsuit or playsuit with mock wrap neckline, short sleeves, waistband and slash pockets; gifted to me by Deer&Doe in exchange for a review
Size: Graded from 44 bodice to 50 hips
Alterations: Bodice altered to wrap over further in front, legs lengthened by 2in
Would make again/would recommend: Yes/Yes

I can't really tell you what might be up next because I am kind of broken. The last month has been absolutely horrific (multiple family illnesses and horrible diagnoses, the resurgence of some old and very unwelcome trauma, and also our bathroom literally flooding with sewage) and my motivation to sew has been almost non-existent. I'm hopeful that when the bedroom ceiling repair is finally finished and we can have our flat to ourselves again I can go through my stash and find a bit of excitement to make something, but my mental health is precarious right now and I don't know how it's going to shake out. Fingers crossed that things will stabilise and I'll be back with something next week!
Posted by Jen at 11:00