As I've mentioned a couple of times now, I keep making denim skirts and they keep sucking. Most of them are so terrible they don't make it to being photographed. I've put my Ness skirt back on a few times since making it, and concluded every time that it's really not wearable and the fit around my waist and hips is just too weird. I had been planning to have another go at it, but put that idea to the side when I realised I'd be making eleven different adjustments for an outcome that was by no means guaranteed. I also briefly considered making a standard mini skirt out of denim and dramatically reshaping the back to be more of a tulip, but eventually went for the Cashmerette Ellis. I said in my sewing plans that I was a bit sceptical about the apple/pear differential, but went ahead and purchased it on two grounds: one, I wasn't sure I could take any more failures and Cashmerette has always fit me fairly reliably; and two, the line art showed the skirt noticeably tapering in towards the hem, which seemed like it would go some way to curing my butt-cape issue. 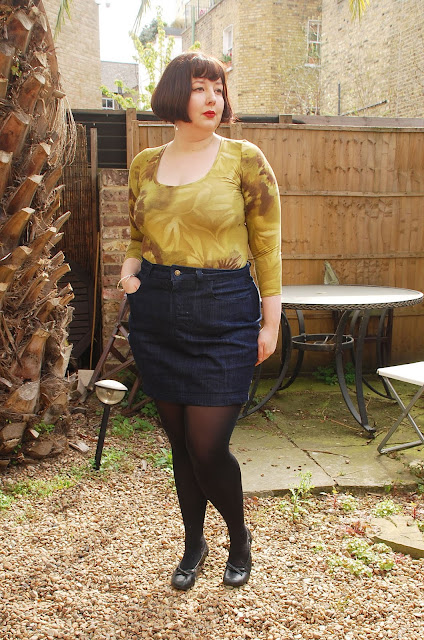 And look! It's wearable! That sounds like damning with faint praise, but every other denim skirt I have made has been worn out of the house once and then thrown away when I get back. There are certainly a couple of adjustments that I could make to this pattern, but they're quite minor and, crucially, won't stop me wearing this version as part of my normal wardrobe. 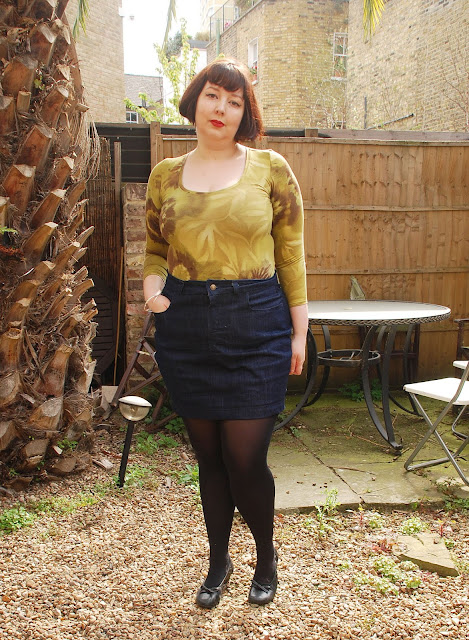 I normally make a size 12 waist in Cashmerette, but went for a 14 this time. My smallest part is very high on my waist, higher up than I would normally wear a skirt, so I thought it'd be safer to size up. For future versions (which I will make) I would size down in the back but not the front as I have a tiny bit of gaping at my back waist. I cut between 16 and 18 in the hips, and that was too big (you can see it's giving me wrinkles). Next time I'll go to 16 or a bit smaller. I bought 2m of this denim and the skirt uses 1m of it, so I'm going to make a second version with the fit adjustments I've detailed here and report back on how it works.

I also shortened the skirt by about an inch and a half, which is pretty standard for me; I think I'm an inch or two taller than the height Cashmerette drafts for but I tend to prefer my mini skirts to be a little shorter. 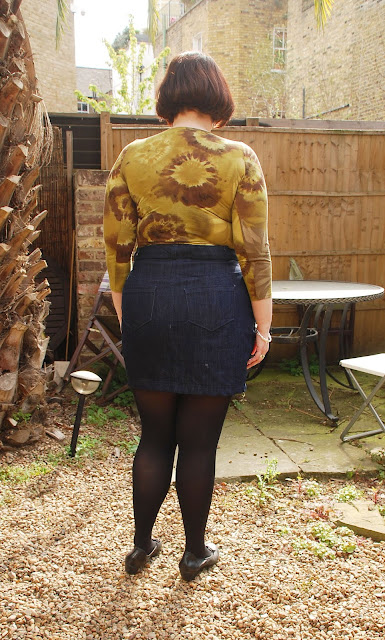 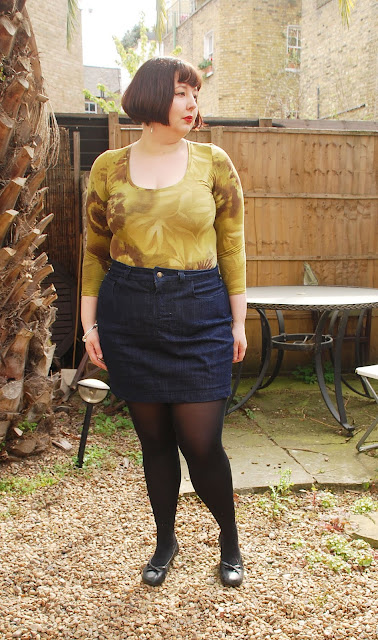 This skirt does not give me butt-cape (finally!) but I would prefer it to taper in slightly more. On future versions I'll either taper the back panels in more, or just size down and do a full butt adjustment. I've never done one before but I probably ought to start. Also next time I will use a slightly shorter zip. The pattern calls for a 7" zip but I had a good inch or so of my zip hanging outside the fly extension. I would probably use a 6" in the future, as that's what the fly extension measures. 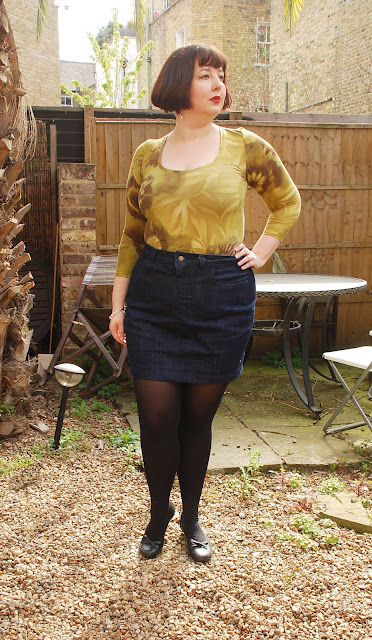 You will notice that I did not do the contrast topstitching. I did some of the topstitching in navy, but I am not precise enough for nice-looking topstitching and the denim was super bulky (I thought I'd bought the same stuff I used for my last attempt, but this was both darker and bulkier) so it definitely wasn't the best time to start. It's on my list of things to practice, though, and I will make a topstitched version at some point. Almost all of my seams are flat-felled (the pocket lining is French seamed); the pattern calls for a zig-zag stitch or overlocking to finish, but I'm really not interested in a denim garment that's not flat-felled. 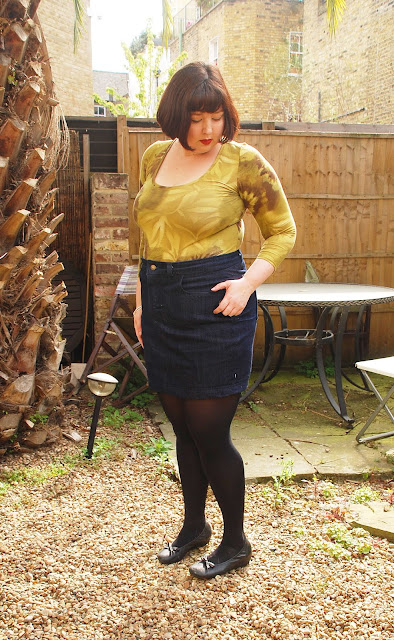 I'm wearing it with the Closet Case Patterns Nettie bodysuit from my spring plans. Normally I make a separate post for all my planned garments even if they're repeats, but I genuinely can't think of anything else I could possibly say about this. I wasn't convinced about this fabric as it isn't what I thought it was going to be when I ordered it, but I actually don't hate the way this looks on me and I've worn it a fair bit over the few weeks since I made it. 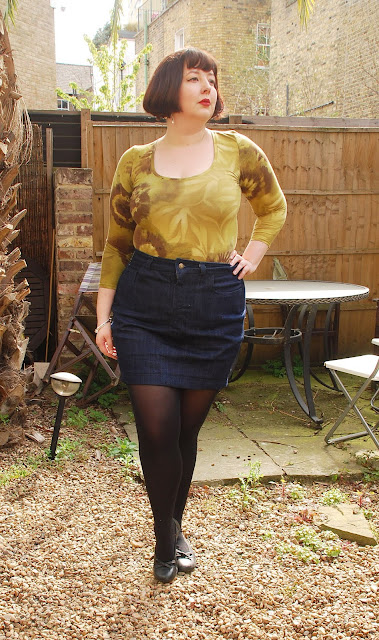 In conclusion: yes, something has FINALLY worked. I will definitely make more of these, probably in some form of needlecord. I saw a really pretty gold printed one last week that I've been struggling not to buy ever since, but I really need to clear another 20 metres or so out of my stash before I buy anything else. Ugh, the trials of living in London and having zero space to put anything. Our ceiling repair is finally getting finished this week and I'm going to attempt to use all the moving stuff around as an opportunity to KonMari my living space a bit. Possibly my sewing patterns also. I've definitely got at least a dozen that need to go but I never get round to it because we don't have any charity shops (or shops in general) anywhere within easy walking distance. I need to get a grip, though, because I'm not going to stop buying shiny new patterns any time soon! 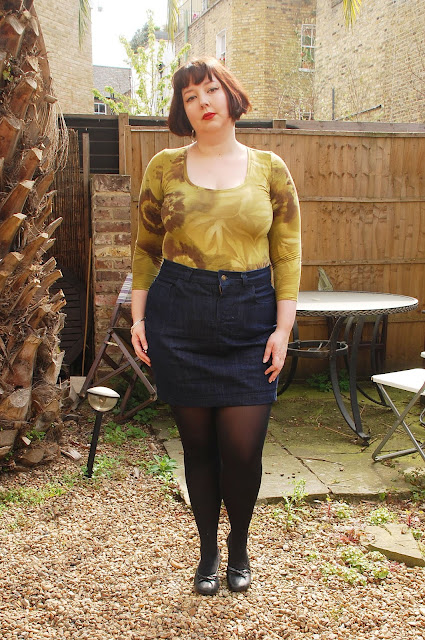