I made my first version of the Victory Patterns Trina dress back in autumn 2016, and I glibly stated that the beach cover-up I made worked sufficiently well for me to move on to an Actual Dress. Then I completely and utterly forgot about it. But last year I suddenly got a hankering for a nice black dress I could wear to cocktail bars, and the Trina popped into my head as something that could be chic, a little different, and remain comfortable through my standard practice of stuffing my face with bar snacks until they won't let me have any more. 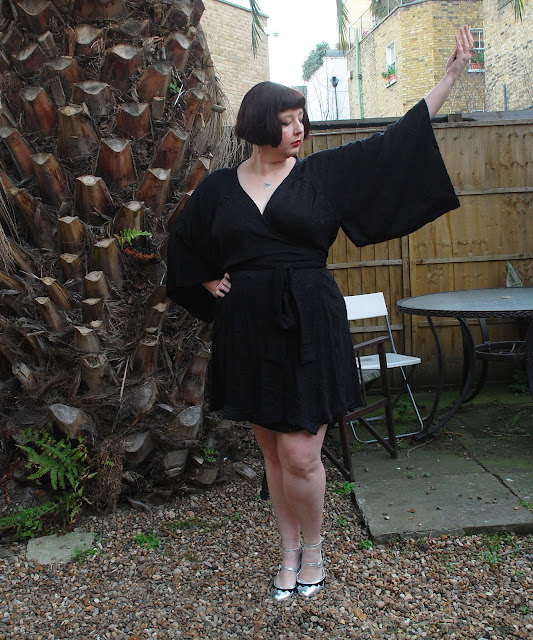 The fabric is the same silky viscose I used for my first Magnolia dress, but in black rather than navy. I kind of knew as soon as I bought the navy that the black would be perfect for this dress, but I held off buying more until January. Fortunately he still had some, and was still happy to give me a hefty discount in exchange for buying quite a lot of it. 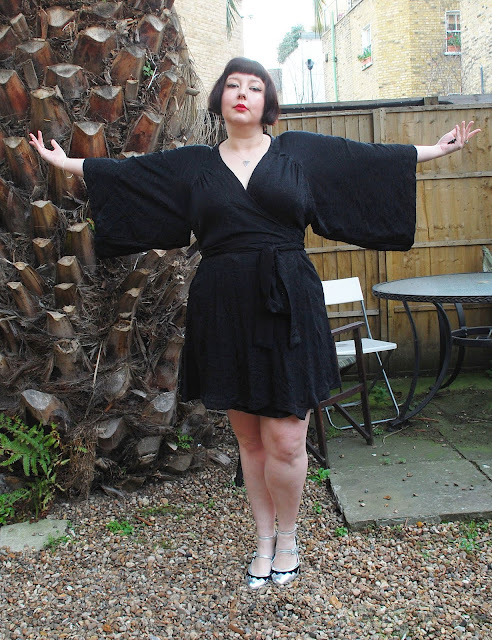 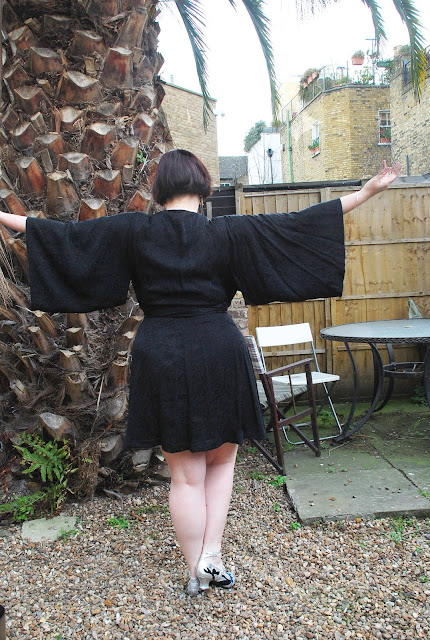 (I'm now going to switch to inside photos, because the light was just horrific when I took these first few but I felt you couldn't get the full effect of the sleeves when I was standing on the stairs. Some of said inside photos were taken before I cut my hair and some were taken after, so there's slight haircut whiplash. Sorry.) 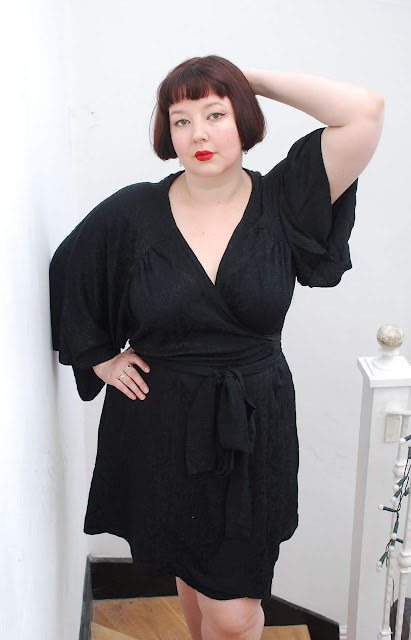 My first version was ever so slightly tight across the bust, so the only adjustment I made to the pattern was to go up one size in the bust, using the neckline from the smaller size, and that worked pretty much perfectly. 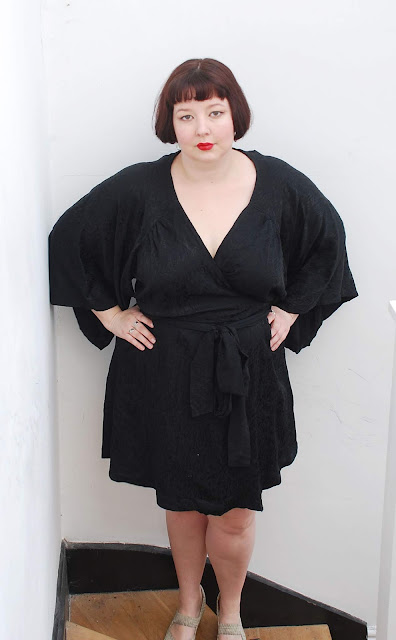 There are two issues with this pattern. One, the instructions. They've tried to make them as comprehensive as possible, which means they take six (SIX) bullet points to say "sew two lines of gather stitching on bodice front between notches and attach to front edge of sleeve". Two bullet points to explain how to gather, then separate points for aligning the pieces, pinning, actually gathering, and sewing. I'm sorry, but if you need it explained in that much detail, this pattern is too complicated for you. This is not an absolute beginner garment. If you'd given me this pattern before I'd learnt how to gather fabric I would hidden in the cupboard and cried. Attaching the bias facing piece to the neckline takes another twelve steps, and when I last made this two and a half years ago I spent ages trying to work out if I'd missed out a step because there were so many instructions. It was almost worse this time because I read the first couple of bullet points, thought "oh right, I get it", finished attaching the facing and then went back to almost an entire page of further neckline facing instructions. They tell you to understitch the facing before turning the entire thing to the inside and topstitching it down, and I cannot see why you would do that. What does that add? 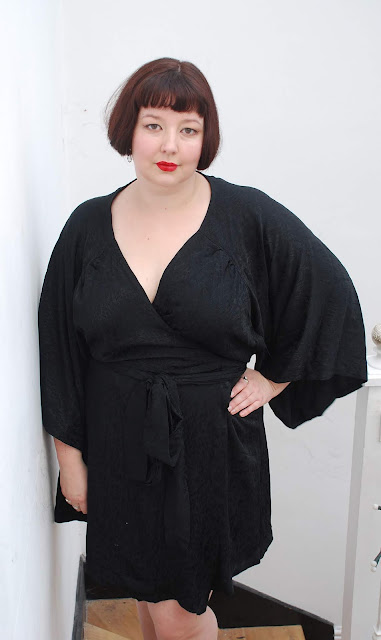 The second issue (and possibly the reason I haven't seen too many people make this dress) is that it's really, really easy for it to accidentally look like a bathrobe. Especially if you're making it up as a special dress and using pretty, shiny, slinky fabrics. When I had this dress almost finished and went to check it in the mirror, I thought it was going to be unwearable. It was shiny and slinky and black and voluminous, which gave bathrobe vibes and bin bag vibes in equal measure. And since it was late, my eye makeup had melted and my hair had gone a bit wild, meaning there was also something of the furious jilted witch about me. Let's say it wasn't my best look. 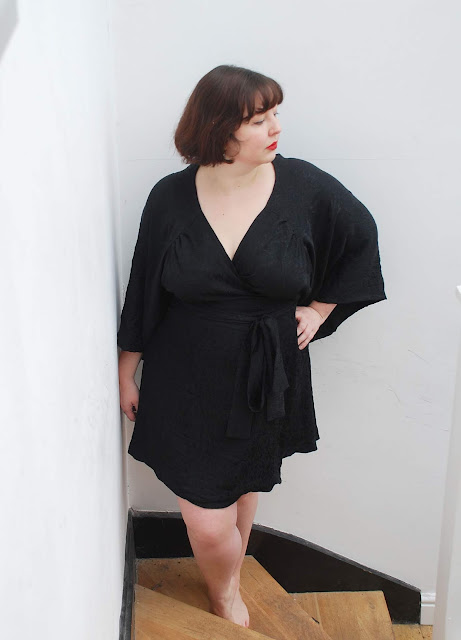 I fixed this problem as I fix most problems with dresses, by lopping a good chunk of length off the skirt. This works much better proportionally, at least for me - having more leg on show balances out the huge sleeves quite nicely. 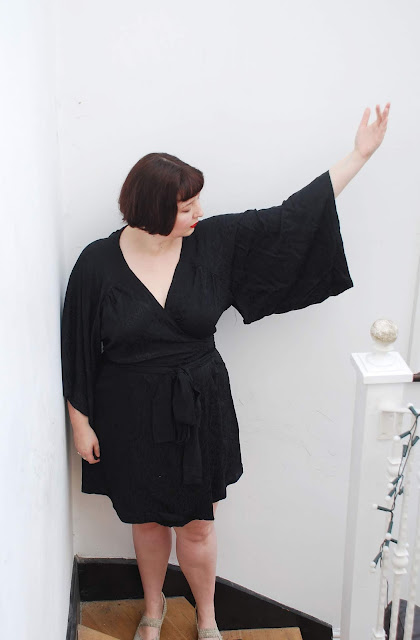 When I wrote my initial plan I hadn't thought of this as my birthday dress, but once I realised I'd be making it in late January, it seemed to make sense. I wore it out for dinner with Patrick on Friday (amazing restaurant with a "Press for Champagne" button at every table) and then for a spontaneous trip to a social dance afterwards, and it worked perfectly for both. I was a bit surprised by the latter because a) I tend to think of wrap dresses as slightly precarious for dancing in and b) I was really quite drunk by the time I got there, which ups the possibility of a wardrobe malfunction at the best of times. But the wrap was very secure, the skirt stayed down, the neckline didn't so much as budge, and nobody accidentally put their hand up my sleeve instead of on my shoulder when catching me after a spin. What more could you ask for? 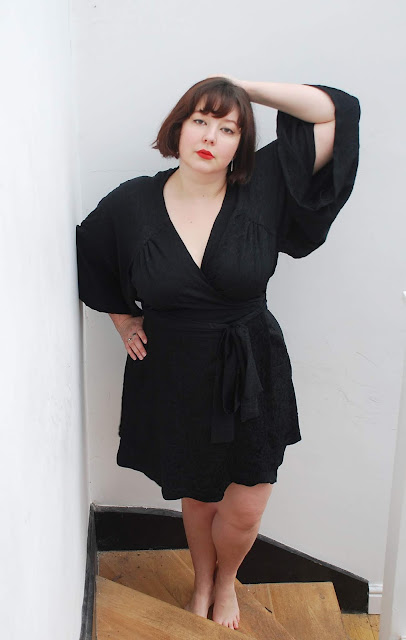 Fabric: 4.5m silky viscose from Walthamstow market (if I'd shortened the pattern rather than the garment I would have needed a fair bit less)
Cost: I paid £15 for 5 metres, but it would normally cost £25
Pattern details: Wrap dress with kimono-style construction; front bodice overlaps the back to leave a space under the sleeves for the ties to pass through. Bust gathers at the bodice, below-the-knee flared skirt
Size: 14 at the shoulders and waist, 16 at the bust and hips
Alterations: Skirt shortened by about five inches, French seams used throughout
Would make again/would recommend: Possibly/Yes 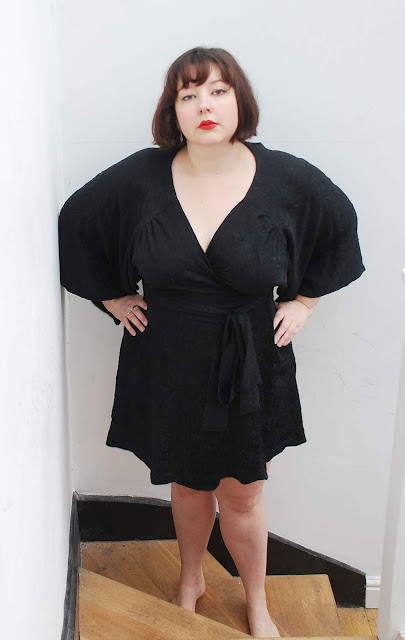 Up next: my first (and second, and third) experiment with Named's new book Breaking the Pattern, the Ruska knot dress.
Posted by Jen at 14:00