three versions of the Ruska dress (Breaking the Pattern)

I pre-ordered Named's first book basically as soon as I could find somewhere other than Amazon taking pre-orders. I ended up getting the book several weeks before its official release date (I saw a few people talking about this so I think there must have been a miscommunication somewhere), and at first read-through I didn't think I'd actually end up making anything. I just couldn't imagine any of the garments working with my aesthetic or my body.

However, I eventually decided that since I owned the book I really ought to try something out. I went with the one that appealed to me most, the Ruska knot dress. I was not at all sure about it, but I always have that problem when presented with a beige sample garment. 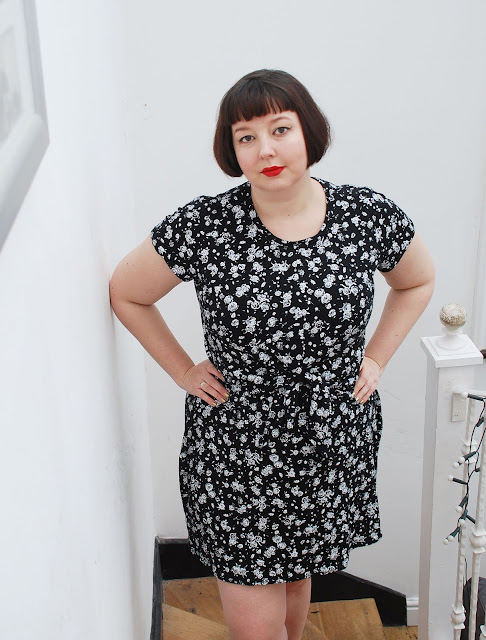 Much to my surprise, this is great. I was fully prepared for it to look awful on me, but it actually works perfectly. The fabric is of course from Walthamstow and it could not be better for this pattern. It's on the lighter side of medium weight and has a great balance between holding shape and draping. 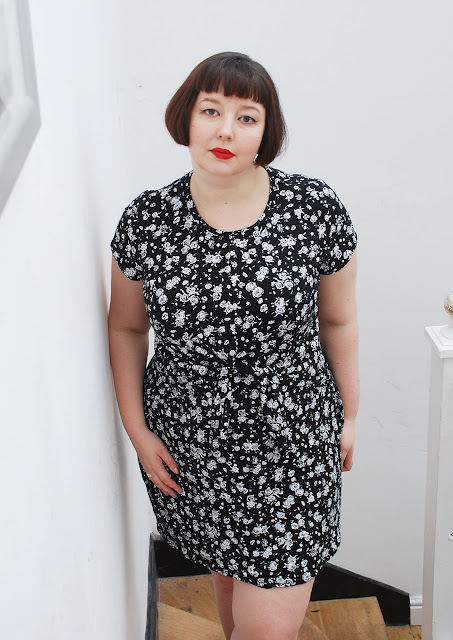 The main reason I thought I might hate this is that it's almost impossible to tell from the finished photos what kind of fit they're going for. It looks pretty straight up and down, but is it designed to have a boxier fit or is that just the model's shape? Since the pattern is also a T-shirt and tunic pattern, I thought it was more likely to be the former. But it's not! The T-shirt and tunic have separate, straighter pattern pieces, and the dress has a substantial amount of curve in the waist-hip area, even before I started drawing wild lines across three sizes. 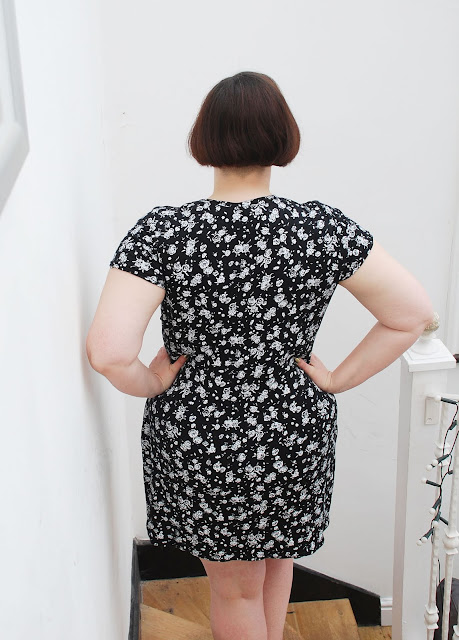 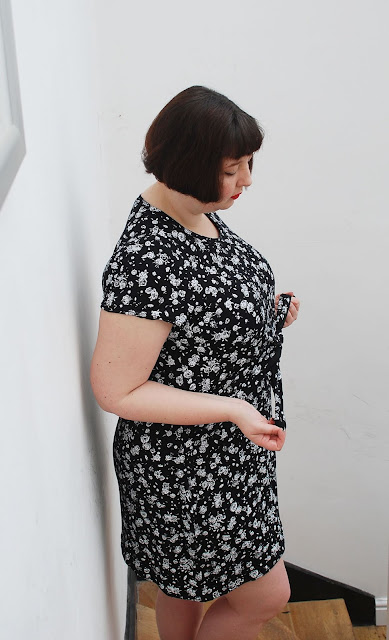 I cut the hips a couple of inches bigger than measurements dictated because I was really worried about clinging, but I really didn't need to do that. It doesn't make much difference in this fabric, but as you'll see shortly, in a heavier fabric it's noticeably too much. 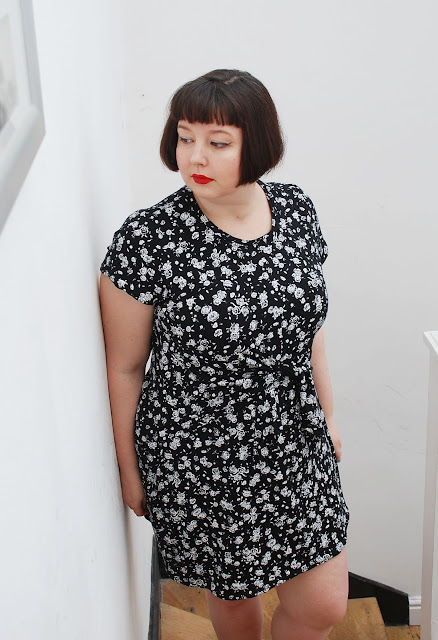 The one issue I had was the neckline. This is an issue I have with Named in general - almost all of their patterns have super-high necks (unless they're strappy, or are trousers) and I've never thought that worked for me. The book only has one variation of one pattern where the neckline isn't right up at the throat. I decided to give this one a try anyway, balked a little when I sewed the ends of the neckband together and realised I'd have to stretch the fabric to almost its full capacity to get it over my head, then decided to leave the neckband until I was able to try on the dress. The neckline as drafted did not suit me at all and I made a few attempts at scooping it out before I realised the problem wasn't the depth, it was the width. Everything I've ever made from Named has a neckline that starts exactly where my neck ends, with no hint of shoulder, and in most things I make from them it's fine. But more than once now I've tried to make a T-shirt with one of their patterns and I find myself staring at this massive lumbering wall of shoulder. I don't even have wide shoulders but it looks really off proportionally. (I went back to read my Selja tee review while writing this; I still wear that T-shirt for exercise and think about how much shoulder I have every time, but I'd completely forgotten that I'd actually already attempted to alter the neckline. God knows what it looked like before!) 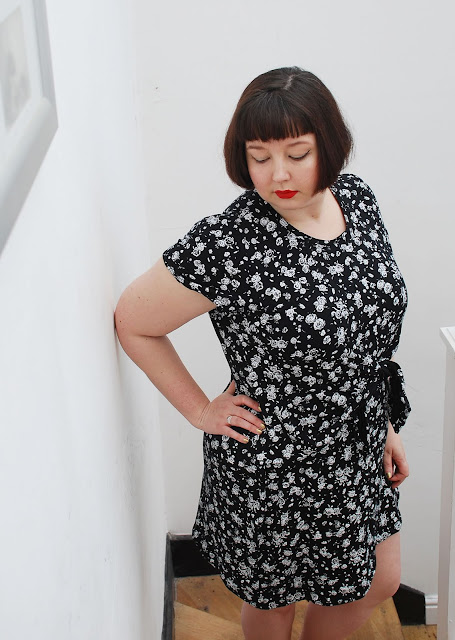 I couldn't tell you with any real accuracy how much I cut down the neck on this one. I didn't have another pattern's neckline immediately to hand so I just cut bits off and tried the dress back on each time. I really like how it looks now - I don't think a scoop neck would have worked here, but with a bit of extra room at the sides I don't feel like I'm entirely composed of shoulder and despair. (If Shoulder and Despair wasn't a furious emo band in the early 2000s, someone really slipped up somewhere.) 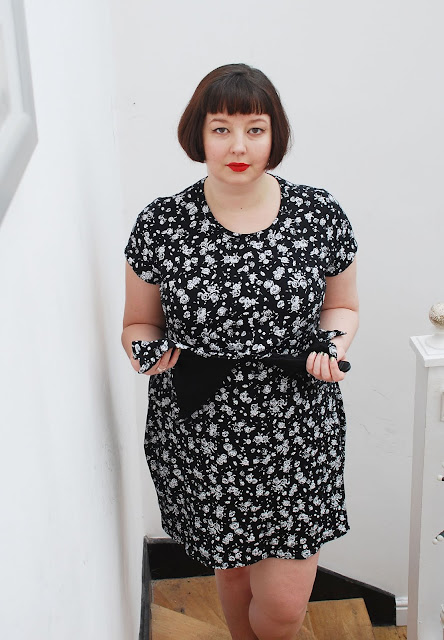 I'm really happy with this dress. It's incredibly comfortable and I think I'm going to be able to wear it pretty much anywhere. It works with or without tights, so it might be one of those rare all-year-round dresses too. It also feels oddly familiar to me - maybe I used to have a jersey dress in a similar fabric, but I have to actively remind myself that this is a new dress and not an old favourite I've been reunited with. It's a little trippy, actually.

Buoyed by the success of this version, I decided to take a risk. 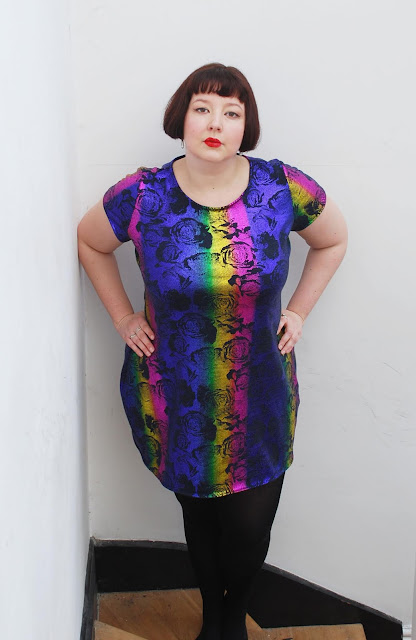 I got this ABSOLUTELY AMAZING rainbow foil sweater knit on my most recent Abakhan trip. I have a "no buying fabric without a specific garment in mind" rule in effect right now and this did not meet it at all, but I bought it anyway without a second thought. When I got it home I started to worry; I couldn't imagine any way to put seams into this print, nor could I imagine any one-piece-front pattern that would look good on me. But the first Ruska worked so well that I found myself wondering whether this was finally my route to the mythical attractive-looking T-shirt dress. I talked myself into it by reasoning that I had three metres of this stuff, so I could easily use 1.5m for a trial version and if there was even a starting point of workability I could remake the whole thing no problem. If it was hideous, I could scrap the whole idea and just make some sort of jumper with the remainder. Once again I was fully prepared to hate it, and once again I was pleasantly surprised. 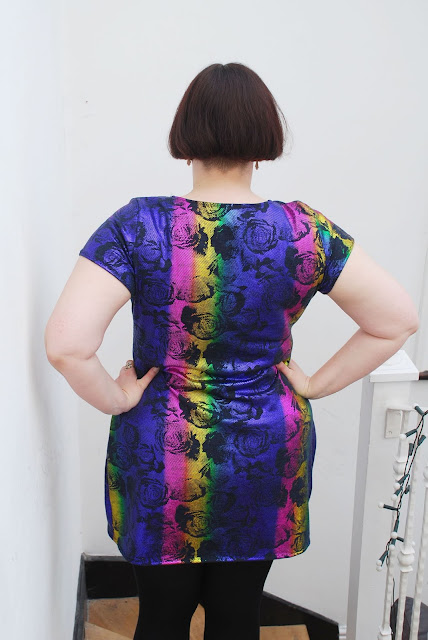 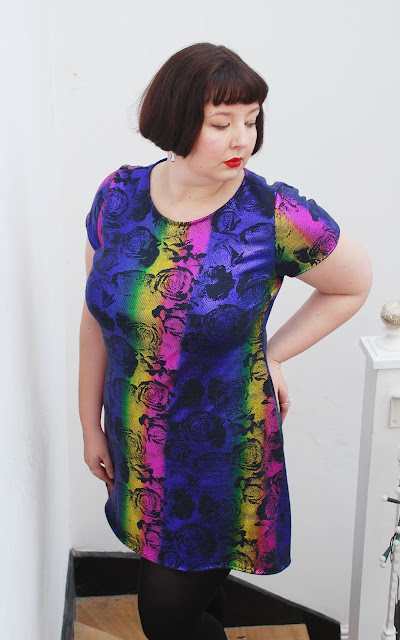 I'm in two minds about whether to remake this version. The extra room I added at the hips gives me noticeable fabric hip wings in this heavier fabric, and so far I've not been successful in removing them. I also think it's maybe a tiny bit too short and in need of a slightly different neckline. This fabric didn't work as a neckband, so I didn't use one, meaning it's not quite the shape I had in mind. I've worn this out quite happily already - it's an amazing low effort/high impact dress and it's super comfortable - but there is a chance that I'll cut this one down to T-shirt length and remake the dress with a few alterations. 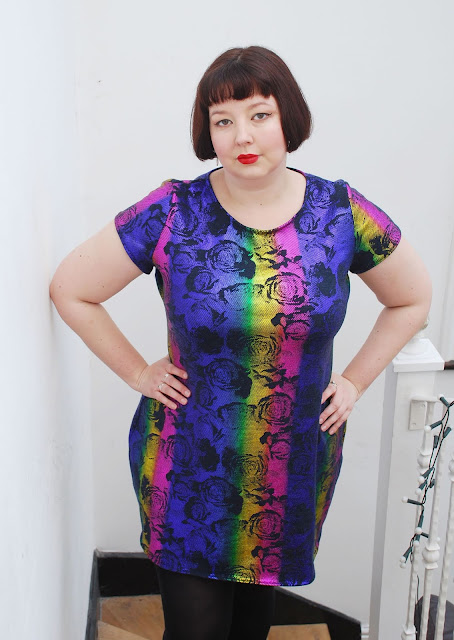 Buoyed by success yet again, I made this: 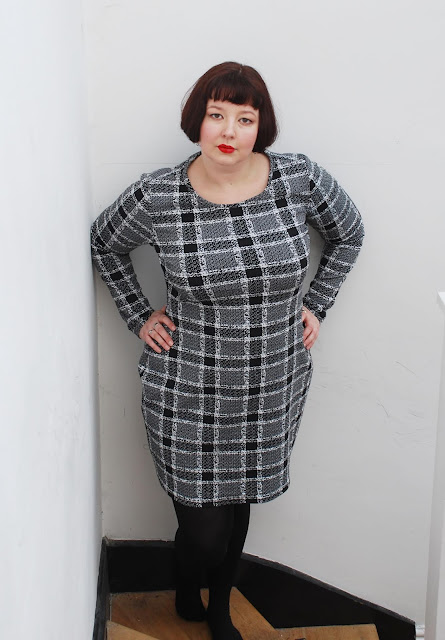 This dress was made with a very specific intent. Quite a lot of the projects I make and the way that I plan them are to work with or around my mental disorders, and I keep a fairly close eye on the way my sewing and my clothes impact my mood and state of mind. Getting properly dressed in nice clothes is something that definitely helps me, but sometimes sensory issues and mental blocks mean I end up just sitting in a pile of clothes on the floor going nopenopenope and then nothing gets done all day. One of the things that always gets in the way here is the waist seam. For some reason when I'm in this state I cannot stand them. I don't want skirts or trousers on, and I can't cope with a dress that has a waist seam even when it's fairly loose. Just the fact that it's there upsets me. I wore the SOI Heather dress a lot for the first few months after I made it for this reason, but it was also quite unflattering, which made me feel worse. So what I wanted was a pullover jumper dress with no waist seam that I could wear around the house but was pulled together enough that if I suddenly got a burst of energy I could just get up and go run errands in it. 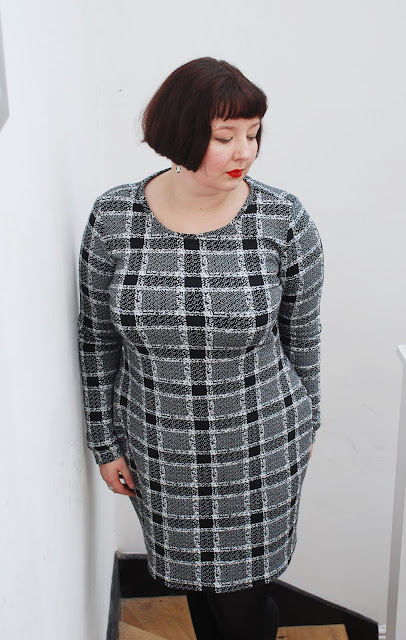 This ponte is another Walthamstow find. It's super thick and soft and is so comforting to wear. I put it on, was pleased at how comfortable it was, then went to look in a full-length mirror and was surprised to see that I probably could have worn it to an office job without raising eyebrows on anyone. 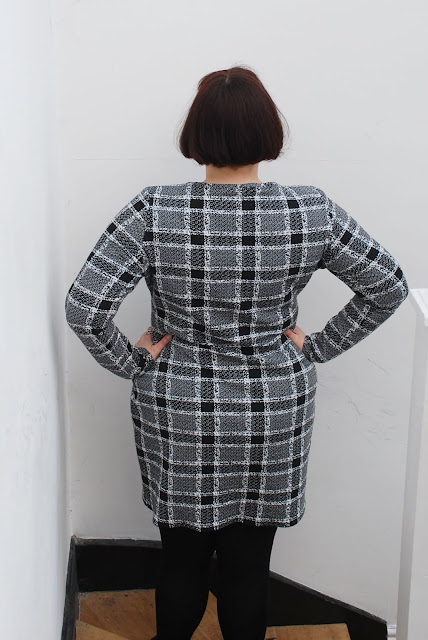 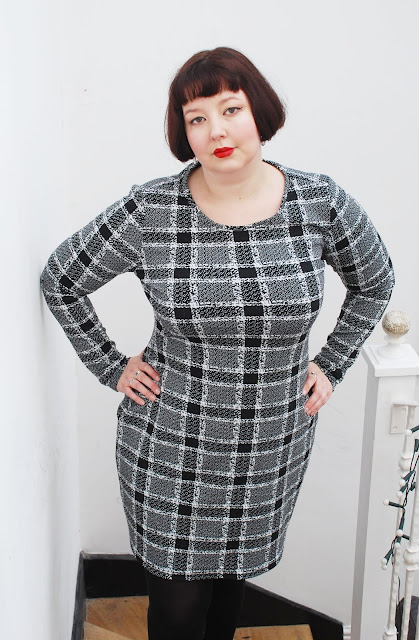 I didn't cut the extra hip room for this one, and it fits much better (yet still doesn't cling to my stomach). I used the long sleeves, which don't come with cuffs but I added some anyway, partly to match the neckband and partly to bring the sleeves in at the wrists a little bit. This dress is possibly my favourite of the three; it fits well, it's extra snuggly, and I'm going to wear it to death if it's even slightly cold. 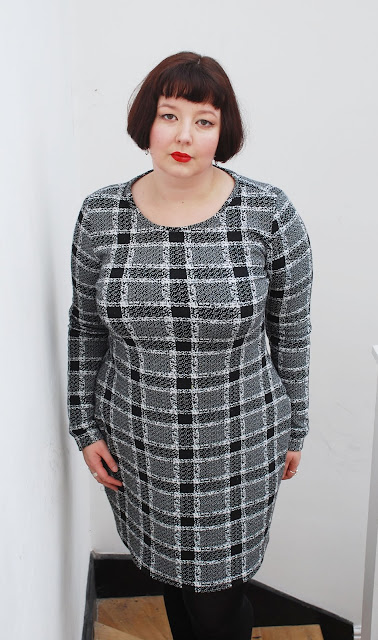 I will definitely make more of these. I need to do some tweaking to the shape for different fabrics, but it's just SO EASY. The last two dresses took me less than an hour each to make, and only need 1.5m of fabric. Whether I will make much more from the book remains to be seen, and probably will depend heavily on how easy it is to change the necklines. 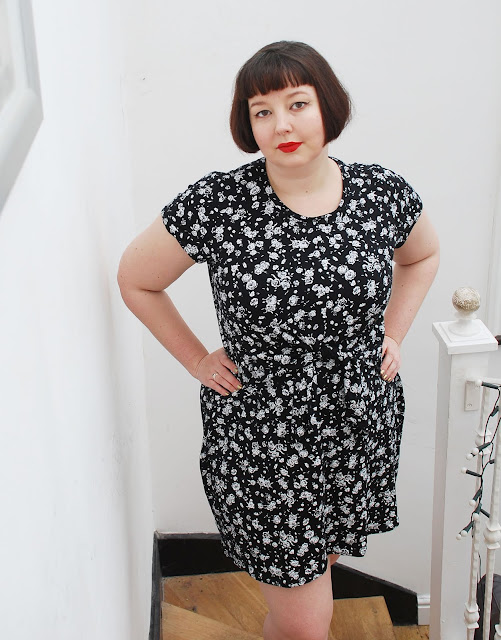 Fabric: Between 1.5 and 2m each of Mid-weight jersey from Walthamstow // Rainbow foil printed on sweater knit from Abakhan // Thick ponte from Walthamstow
Cost: £4 // £12 // £4
Pattern details: Knit dress pattern with four views: simple knit dress with side vents, shorter dress with knotted overlay, hip-length tunic, T-shirt
Size: 6 at the shoulders out to an 8 at the hips (this is the book's sizing, not normal sizes, FYI, I'm not a size 6)
Alterations: Neckline widened and lowered, skirt length varied, cuffs added for long sleeves
Would make again/would recommend: Yes/Yes

Up next: My spring plans on Thursday, and then I'm not sure. My mental health has very much inserted itself between me and the sewing machine these past couple of weeks, so we'll have to see what I come up with!
Posted by Jen at 10:00