They said I was crazy, but I did it. Meet the second, somewhat better fitting, version of my Papercut Patterns Sierra jumpsuit. 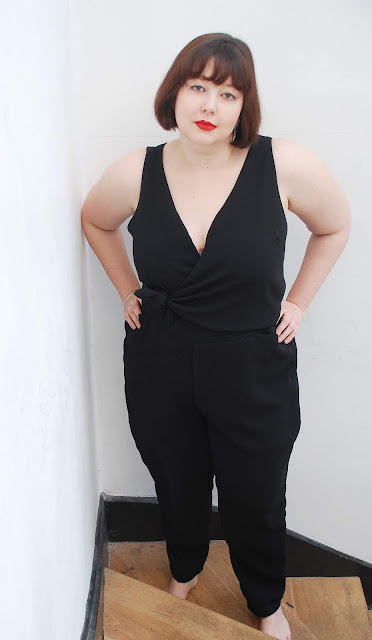 Sadly, I think this one is also a fail, and it's a fail due to the fabric, which is particularly galling after everything I went through with the pattern. The dude at Walthamstow didn't have the fabric I used last time, so I got the most similar thing he had and I don't really like it. It's not as black as the previous crepe and also the static is RIDICULOUS. The shape of the trousers looks really weird in these photos because the fabric is clinging and crackling and riding up my leg. It's almost MC Hammer looking. I'm actually thinking of going back in and partially lining the trousers to see if that fixes things. 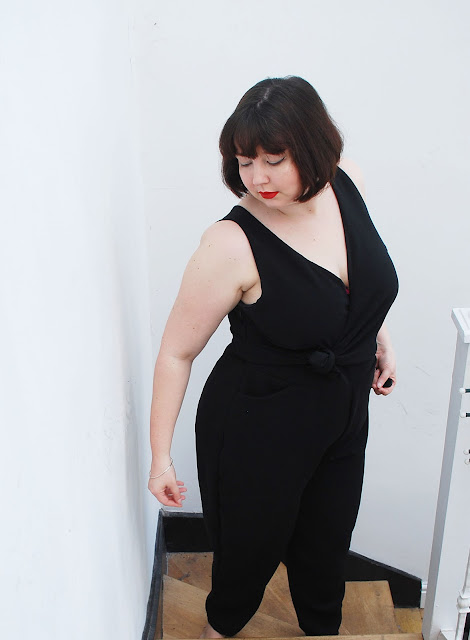 Changes! I did a 1.5 inch FBA and it's still more cleavagey than the pattern envelope suggests. That's OK, though, it's for evening and I'm quite pro-cleavage. I would probably bump it up another .5 inch were I to make this again, I think. 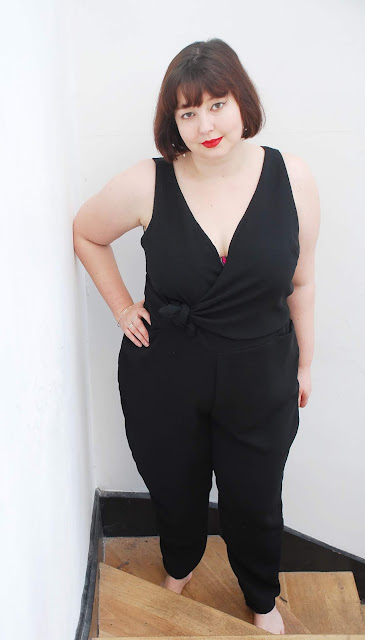 I altered the back to be a bit smaller and cut a bit of extra room in the hip. Turns out I did not need the extra room in the hip, I just thought I did because the pockets sucked so much. It's quite hard to see the shape of the trouser legs when I'm looking at the mirror, but now that I've seen the photos I'm definitely going to go back and take them in from hip to mid-thigh. At this size I don't need to use the zip at all, and ideally I'll alter it to a size that's a bit more fitted but still doesn't need the zip so I can just take the stupid thing out. 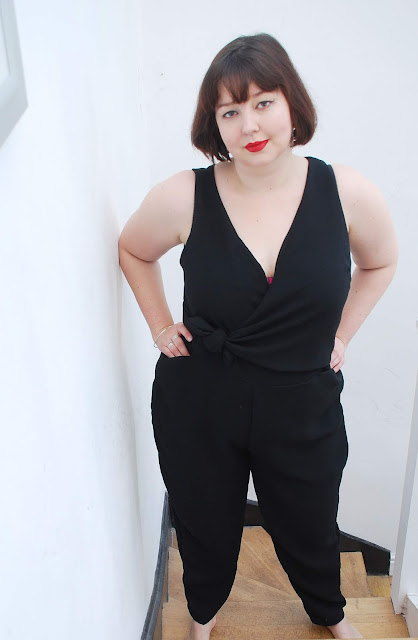 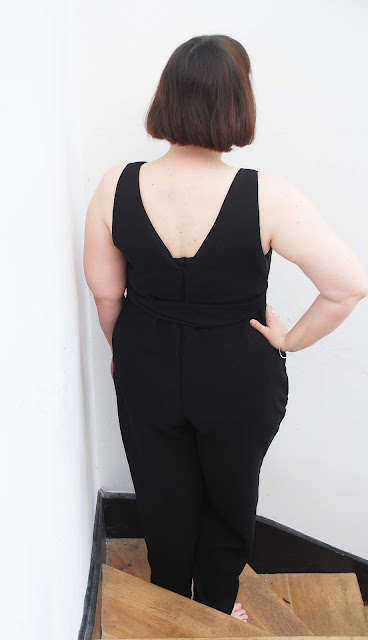 (For some reason the back is lower in this version, and I cannot for the life of me work out why that is.)

Instead of the stupid in-seam pockets, I used the slash pockets from the Sewaholic Thurlow trousers. I'm not sure this was the best idea, as they do feel and look a little bulky, and they definitely look quite strange with the excess hip volume, but even so it's an improvement. The best idea would have probably been to dispense with pockets entirely, but for some reason I find trousers without pockets really unnerving. I've since read a couple of other reviews which say they had the same issue with the pockets gaping despite not having giant hips like me, so it's possible that just using a different in-seam pocket piece would work. 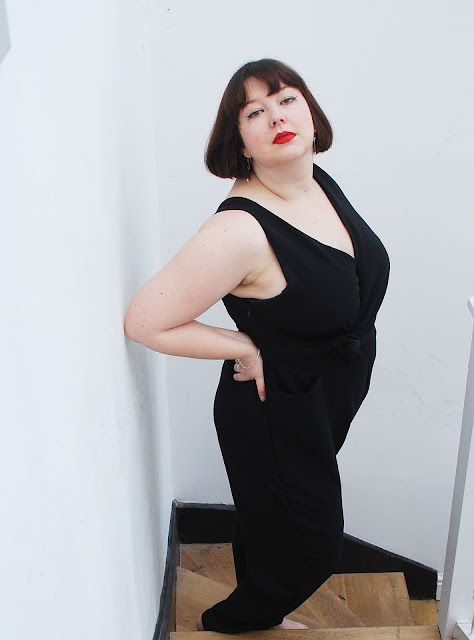 Even now knowing what the instructions were trying to say and what the end result of each stage should look like, the construction was still annoying. The line of jumpsuit is super-confusing and I really hate that you can't do any fitting at all until the whole thing is completely finished. Because of the way the pattern is designed, I'm really not sure that there's another way around it. It would be fine if the pattern was made up of a top and a pair of trousers, but it's not. The back is one solid piece. I'm not even sure why this is - when the jumpsuit is on you can't even tell that it's one piece because there's a tie wrapped around the waist. There are no contour darts or anything that might be disrupted by making the back into two pieces, and I'm actually quite tempted to give it a try, despite having initially sworn off this pattern forever when I realised this version wasn't really wearable either. 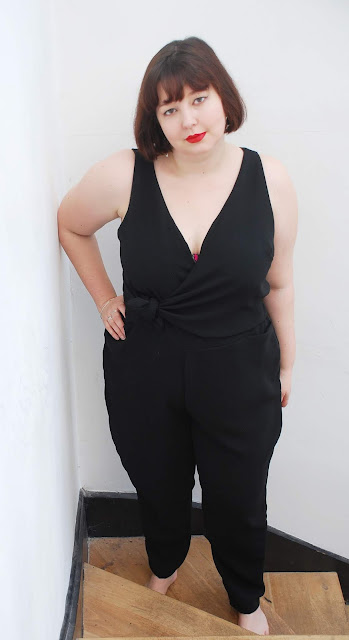 There are multiple pieces of fabric in my stash right now that would make great versions of this, both as the jumpsuit and the playsuit. My red linen from Mood would look fabulous as this pattern. I have some bright green crepe that was almost definitely going to be a Sierra. All the pattern had to be was OK and I would have made at least seven of them, but I just don't know if I can do it again. My answer was "definitely not" until I thought about cutting the back piece in two, and now I am thinking I might try it. It seems INSANE to do this again, I know, but I really want this stupid jumpsuit now. If I do cut it in two, I might replace the back bodice with a different pattern - I think the Cashmerette Webster uses a similar kind of facing construction and doesn't do awkward bra-flashing things. 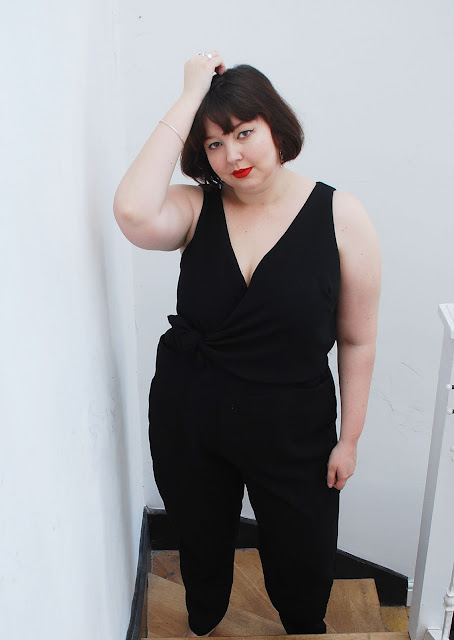 Fabric: 2.5m of crepe/1m of viscose lining fabric  from Walthamstow market
Cost: £10.50 for the lot (double that if you count the previous failed version)
Pattern details: Wrap jumpsuit with wide leg/narrow leg/shorts variations, with side zip and slash pockets. Front bodice is lined, front lining and back facing require bias binding to finish
Size: M in the shoulders, L in the bust and waist, XL in the hips
Alterations: 2 inch FBA, 1 inch taken out of the centre back bodice, 1.5cm added to the hips (I work in metric and imperial completely interchangeably, I'm sorry), pockets swapped out for a different pattern
Would make again/would recommend: Undecided/No

Up next: I'm not sure! I managed to finish all my winter projects before February even started, and the logical thing would be to share my Trina dress next, but I'm considering holding off until after my birthday (which is what it's for). My plan for February is to try and use up some stash fabric and/or try out patterns I already own but haven't used yet, so we'll see what I've come up with in a week's time!
Posted by Jen at 10:00