a mash-up dress: when you just feel cute

I'm back! We had a really nice but quite strange holiday in Córdoba, which is beautiful and unusually introverted for a Spanish town, and we found it almost impossible to get our hands on any of the stuff the place is famous for. Pastries? Nope. Pottery and tiling? Barely. Leatherwork? Nope. Russian salad out the wazoo, though, for some reason. But there was sunshine and balmy temperatures and amazing food (if you don't order the Russian salad) and a really great spa in our hotel, so we returned relaxed but confused. Glad we went, would recommend going to Seville instead.
It's taken me a long time to get my head around photo-taking for a variety of reasons, but I did a whole bunch this weekend and have about half a dozen new things to share with you over the next month or two (by which point, hopefully, I will have made and photographed more stuff! We'll see how momentum goes). Let's start with the one that's been waiting the longest. 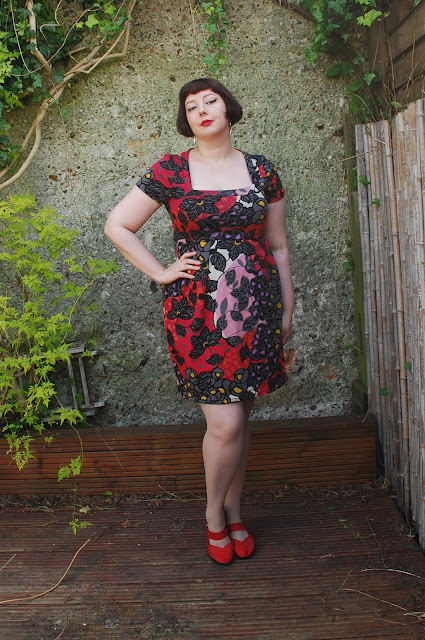 You know sometimes you just feel cute? I just felt cute in these pictures. Which I actually wasn't expecting, because I wasn't at all sure about the dress when I finished it. This is what I managed to squeeze out of the 1.2m of fabric I had left over from my birthday dress and it's a Vanessa Pouzet Wanted top and Sew Over It tulip skirt mashed together. Given how often I mix and match both of these patterns with other bodices and skirts, I was surprised by how different this particular finished result felt. "Cute" is the first word that comes to mind, and that's very rarely true for me. 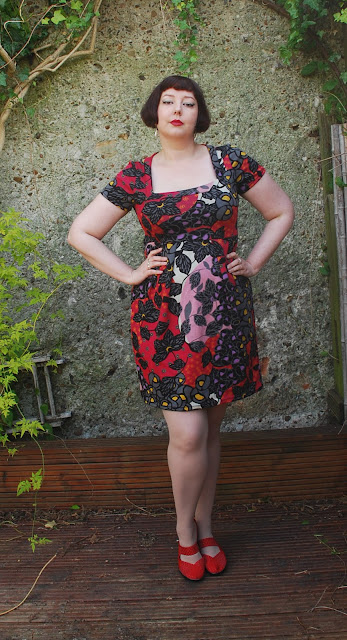 I don't have a huge amount to say about the construction of this - you've seen me make Wanted tops and tulip skirts dozens of times. If I hadn't been so surprised by how much I liked the photos I probably wouldn't have bothered making a standalone post for it. But there's a bit of a disconnect in my feelings about this dress that I think it's worth going a bit deeper into. 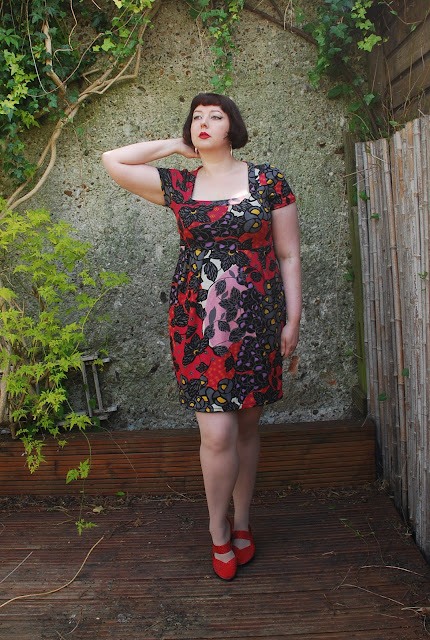 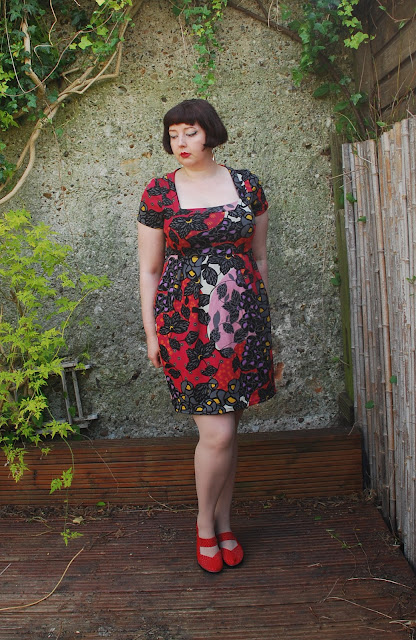 The first issue I had when I tried it on is that it's ended up as an empire waist. This is partly because of fabric constraints and partly because I didn't take into account the kind of fabric I was using. Every other time I've turned the Wanted top into a dress it's been a viscose jersey maxi dress, and I've needed to make the bodice very short so that it sits at my actual waist when it's pulled down by the maxi skirt. So when I saw how much fabric I had to cut the bodice from I thought it would be fine, without realising that a thicker double jersey and a shorter skirt wouldn't create the same level of pull. I think the empire waist is what's giving the "cute" vibe and in photos I don't hate it (it's on the same spectrum as the Selkie dress thing, which I have occasionally wished I could pull off), but in real life people seem to be trained to think that empire waist = maternity dress. Especially when the skirt has big front pleats to create space in that area. So I worry I wouldn't actually wear it anywhere for fear of giving the wrong impression (particularly given the extremely gossipy nature of a subset of my wider social acquaintance). There's also the back view: 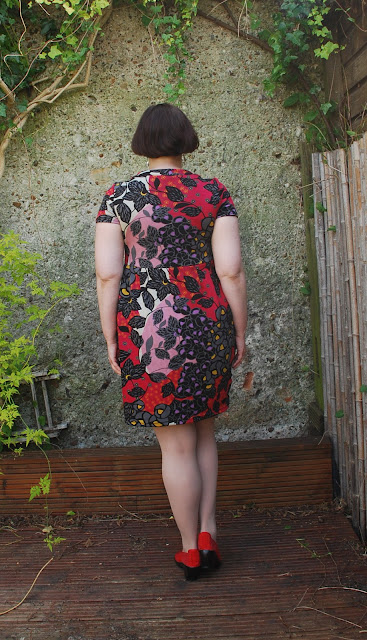 To me, this feels like a completely different dress and I honestly find it a little jarring. So cute from the front, but almost... office-y? from the back. Just in shape, not in colour or print, but I do find it weird. Obviously this one is easier to ignore because I almost never see myself from the back. I am aware of it nevertheless. 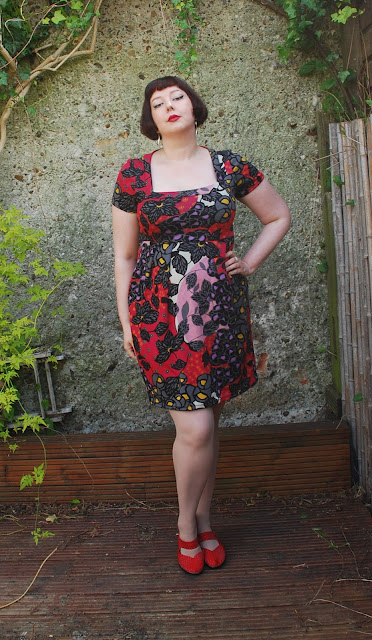 On the other hand, now that I'm starting to feel better I am really craving things that are even a little bit different in my wardrobe. I still love my sleeved Kielo dresses, Hepburn tops and wide leg trousers, but it is literally all I wore all winter and I'm bored. I'm not quite ready to to start making earth-toned skinny jeans or anything like that, and I'm not sure I ever will be; I still like my style overall and am looking to expand rather than change. So if I could persuade myself to wear this kind of thing outside, I think it would be very good for me. 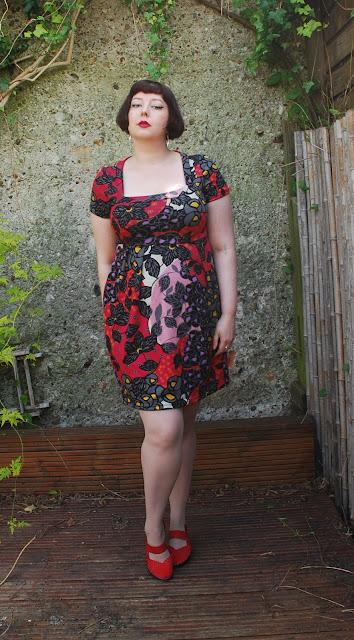 So as yet, I'm undecided and will be interested to see how my relationship with this dress progresses. I'll definitely be trying it on regularly. If nothing else I hope it spurs me on to take some more small risks with the styles and silhouettes I choose for my projects. It's been such a year of change for me so far and it would be good to include my sewing in that to some extent.
(I've been doing Me Made May again to try and work on said variety thing, and it feels so strange now that Instagram is trying to discourage posting photos. I know "I'm getting very little engagement" sounds like such a stupid thing to say, but it's so different from the way I'm used to MMM going that it's bound to feel a little discouraging. I'm going to carry on because this is for me and not the algorithm, but I thought I'd share my irrational feelings with you anyway.)
Up next: I think I'll be posting my first two attempts at making trousers from my block, which were unsuccessful for reasons I hadn't anticipated at all!
Posted by Jen at 10:00