My shortened spring plan is going very well. Four out of five are done, and I've decided to make the fifth (the dress for the wedding) way more complicated by trying several different things out first. There's not much time left to go, so we'll see whether that pans out for me or whether I panic-sew yet another Anna dress the week before. Here's the first of the completed projects, which is a fail but a useful fail.
About a month before the pandemic first hit, I went to a "make your own blocks" weekender at Ray Stitch. I was really excited for it, but in the end not super enthused by the results I got. The bodice toile fit worse than most standard bodices plus FBA I've used (when I asked how to adjust it so there wasn't a large diagonal indent between the boobs, the instructor told me that bodices would just always look like that on me), the sleeve block was literally useless, and she rushed through a knit block with us, telling me I would never be able to have one that fit properly because of my waist-hip ratio. She used a particular system that she claimed would work for any set of measurements, but either it didn't or she didn't want to bother. Every time I was outside of an expected measurement ratio she would say "oh, just use the closest one, it'll look better" and she was absolutely wrong every time. (Also there was a woman there who kept loudly saying "wow, I thought I was going to be the one with the largest hips" every time I had to say a measurement out loud and also kept looking at my thirty-five-year-old ass and talking about the young people with no work ethic, but that bit isn't the class's fault.) I came away with four blocks, and the only one I thought might be OK was the trouser block, so that was the one I committed to trying out properly. And then didn't for two years. But now I have! 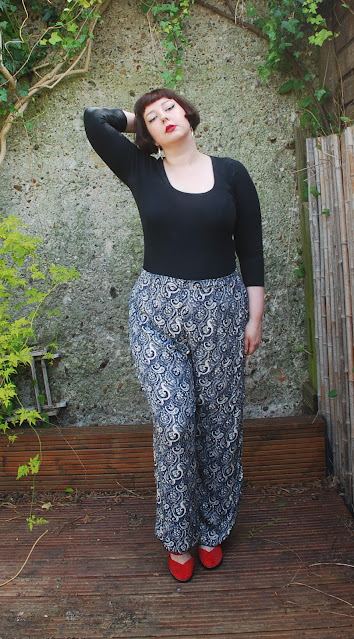 This is attempt number one, made out of a paisley viscose I knew I wasn't actually going to wear. I sewed them up pretty quickly, looked in the mirror, and thought "oh great, I've made a pair of great-fitting trousers and they're paisley with no pockets". My main desire for the trousers was for them to not sit in under my belly and create the impression I was wearing a nappy, and attempt number one had a perfectly smooth front. I was both pleased and annoyed. 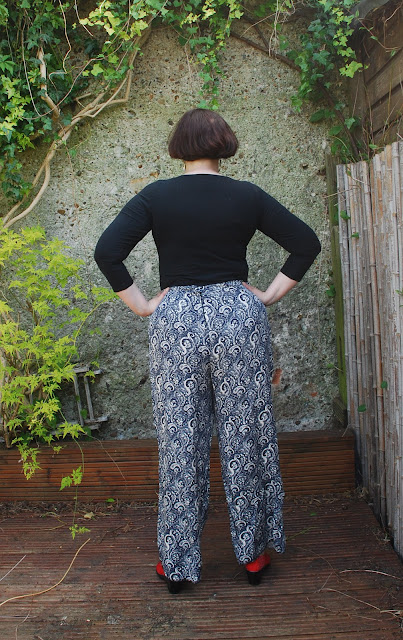 The fit at the back was also great, if we ignore the fact that I cut a waistband using a form of logic I'd then completely forgotten about by the time I came to sew it, so it's a bit weird at the overlap. They're too short to wear with heels, but that was never going to matter. I was happy enough to move on to the corduroy version, which you will see in a moment. I was happy with the fit when I made them, but I then put them aside because I didn't want to wear them before I'd photographed them and couldn't get my head around photography for several months. And when I did get round to it, things had changed.
I tried the cords on a couple of weeks ago and was much less happy with the fit. I thought to myself "these trousers have grown. That's weird. Corduroy shouldn't do that." A few days later I went to the next appointment for the clinical trial I'm doing, where they weighed me as they usually do. And that's when I found out I'd lost 17lb since making these trousers. It's been so long since I lost any weight - and I haven't been working on it - that it just didn't occur to me, which now feels deeply stupid. "Ooh, maybe the corduroy grew" indeed. 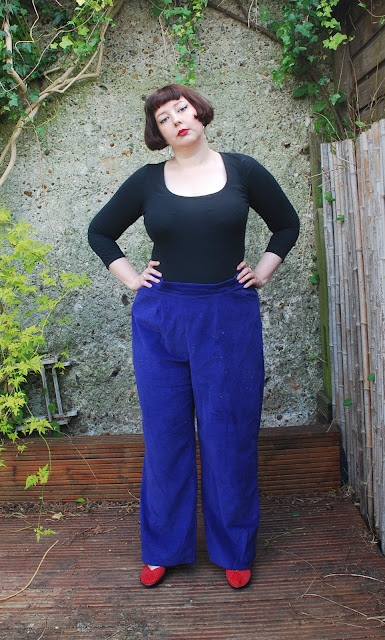 So here they are as they fit now, and as you see, it's not great. Not only are there four surplus inches in the waistband, but it's also weirdly bagged out across the abdomen. I don't really know why this is because I'm certain I haven't lost that much belly, and the viscose version isn't doing this (which may be attributable to relative drape in the fabric, I suppose). Regardless, it is incredibly unattractive and renders these trousers unwearable even if I could alter the size of the waist to fit again. 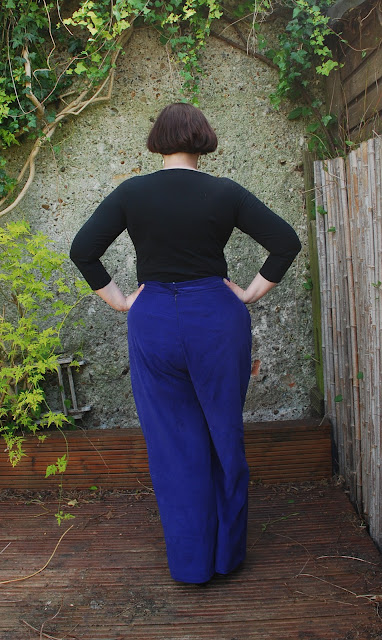 The back still looks like it fits OK, if you ignore the fact that standing this way created enough of a gap in the front waistband for me to be able to look down the front of my trousers and see my bare thighs. I think if I were to try this same block again I would need to alter the front much more than the back. 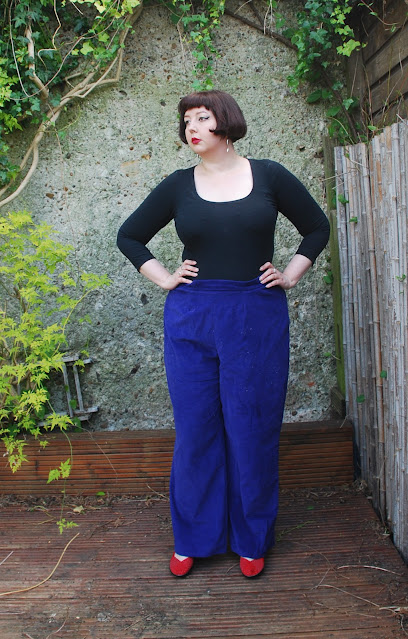 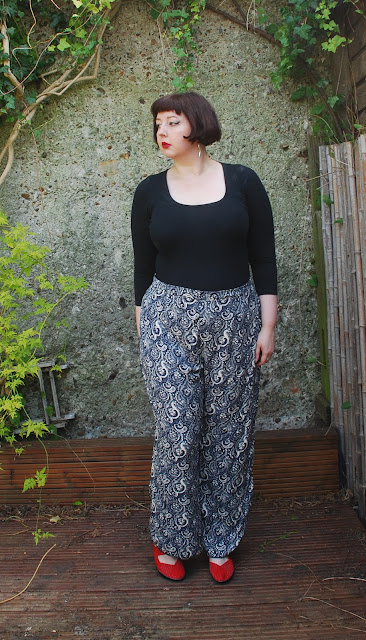 I've not yet decided whether to alter the block and give it another go, or to go through my stash and try a different pre-made pattern. Since I don't know what's going to happen to my weight over the next year or so, I don't want to put huge amounts of effort into getting a perfectly-fitting anything yet.
Something that I really would like to figure out is trouser leg width. I have always had very large thighs that spread a lot when I sat down, but I'm certain that back in my trouser-buying days I was always able to find ones that looked more fitted without straining over the thighs when I sat down. I have attempted a few times when making trousers to alter the legs to get this, and it has never worked. (It's the reason I stopped making Pietra pants - I could never get the legs to look exactly the way I wanted without compromising thigh room, and for some reason even trying stretch fabric didn't seem to help.) Apparently bootcut is coming back, so I might give that a try. 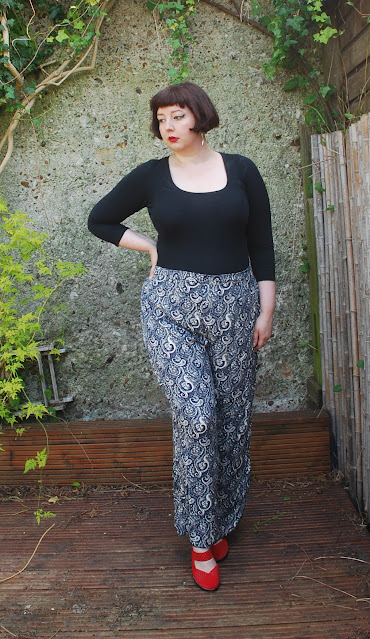 While I'm glad I did this, it hasn't left me with any more trousers to wear. Though I have discovered I can now fit into the navy Esther trousers from my autumn 2020 sewing plan, which you have never seen because they really, really didn't fit. I held onto them stubbornly because I thought I'd done a really nice job on the construction and I'm now very glad I did. I am going to be wanting more trousers, and I'm also going to be wanting a greater range of tops. My number one takeaway from this year's Me Made May is that I am extremely bored of my array of plain black short-sleeved tops and I'm dying for a bit more variety. But more on that when I post my summer plan!
Up next: the lemon dress! Apologies in advance that I'm not currently replying to comments - for some reason Google is insisting I'm not signed in, but also won't let me sign in, so I can't actually comment on my own blog at the moment. Deeply stupid. But I'm still reading and appreciating every single one!
Posted by Jen at 10:00