First I'd like to say thank you to everyone who commented on my last post, and to the couple of you who emailed me. I was struggling and not in a space to reply but I really appreciated it, and it really helped me to get my head back in a sewing space again.

Life update: this past month has been weird. I can't remember how much I've talked about this, but I was diagnosed ADHD at the beginning of last year. I was so hopeful that things were going to fundamentally change - it's why none of the anxiety and depression medications worked for me, it's why I wasn't getting anywhere with therapy despite having an excellent therapist - and then spent a full year going through an increasingly ridiculous comedy of errors trying to get some basic medical information to the psychiatrist, meaning that I didn't actually get any kind of prescription until a few weeks ago. Taking medication has made things so, so different and I'm both excited for what I might be able to do and having to confront the concurrent reality; ie. that I am having side effects, some of which exacerbate other health conditions I have, there are things about my life that will need to change in order for this to work, and the full extent of the medical care I am getting is Zoom appointments at 9pm with a man who completes a tick-box sheet while yawning his head off and then charges me quite a lot of money to write a prescription for which the pharmacy then charges me quite a lot of money. So there's a lot on my plate right now. But on the upside, we've booked our first holiday since September 2019 and I am very much looking forward to that.

Also, it was my birthday this month, and I made a dress! And took some actual photos! 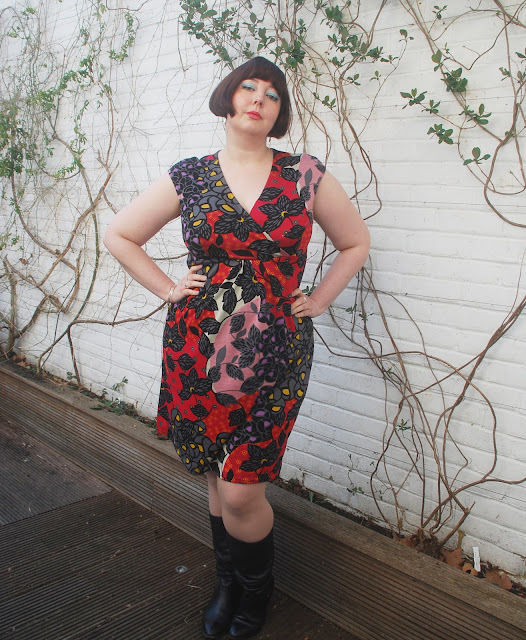 I tried to make a birthday dress during lockdown last year and failed spectacularly (I ordered some fabric online and it was basically unworkable). That was sufficiently discouraging that I hadn't even thought about trying again this year, despite the fact that Patrick had booked us into a nice restaurant. But a week before my birthday, after one full week on medication, I decided to take a walk to my new local fabric shop (it's less than a ten minute walk, possibly dangerous) and if they had anything that inspired me, I would make a birthday dress. 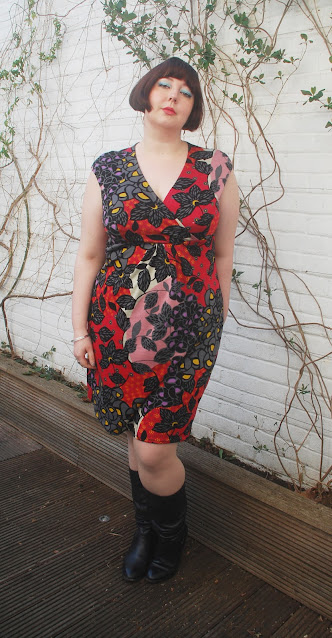 I was drawn to this fabric as soon as I saw it. It's a super soft and comfortable double jersey, in a colour I like but don't have any of in my wardrobe. I bought it without really knowing what pattern would work best, but I was fairly sure I'd have something. After going through my pattern boxes, I settled on Vogue 8724, which I made once five years ago. I still have and like that dress, but my main concern at the time about the versatility of a white dress were well-founded, and so I don't wear it much (I also don't really like wearing it with tights, which takes it out of potential rotation ten months of the year). In my head I'd conflated not really having occasions to wear the dress with not really liking the pattern, so I didn't make it again. Until now. 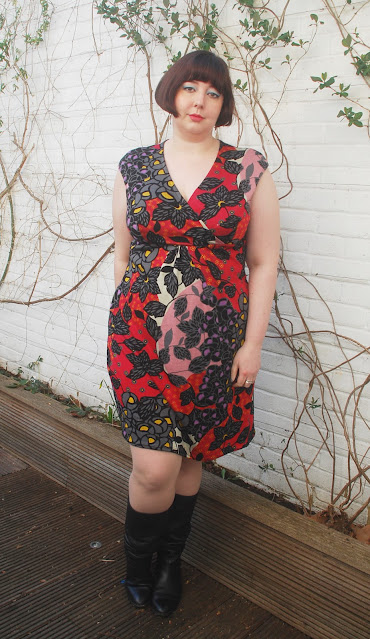 This is a really great "easy win" pattern. It's barely 1.5m of fabric - I actually had enough to cut out a second dress from what I bought - and it's such a quick sew. There's nothing complicated to do, and because the pattern has princess seams at the back and cup sizes for the front wrap, it's also a cinch to fit. It looks fitted but also looks and feels completely non-restrictive. The only thing I would point out is that the neckline is just turned and stitched as per the instructions, but that's very easily remedied with an extra strip of jersey. 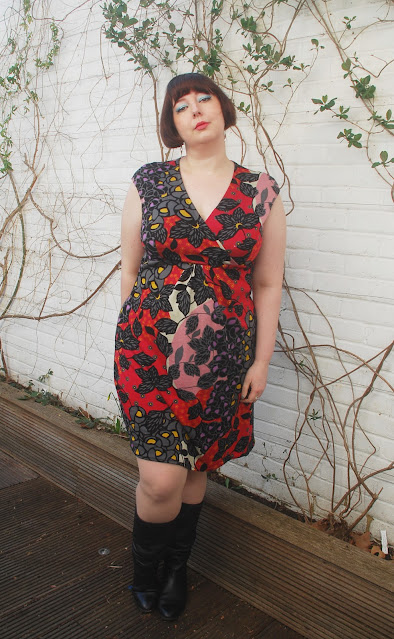 When cutting this out I did remember feeling, the last time I put my original dress on, that it felt a hair too short. Instead of thinking "oh, that must be because I hacked several inches off the hem after I finished it, because that's what I do with literally every dress ever", I instead added several inches of length and ended up with a weird mid-calf length that I really dislike on me. Fortunately I was able to repurpose the subsequent offcuts into the neckband for the second dress, which I haven't started yet. I will say that this particular mistake made me realise that this pattern would make an amazing maxi dress, and as soon as I find a fabric with the right kind of weight to support it, I will be trying that out. Don't tell me I don't need more maxi dresses. It will never be true. 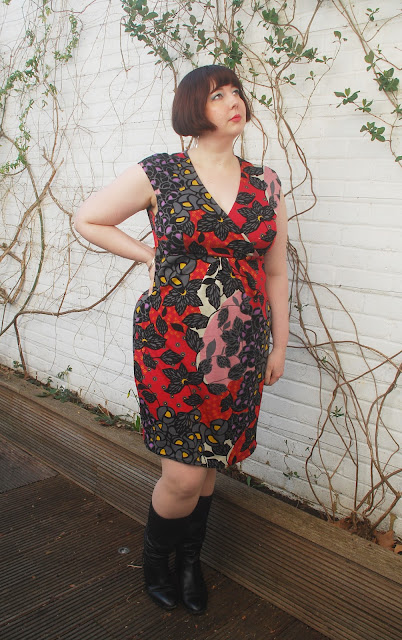 I am really delighted with the final garment. It's fun and comfortable and I love this shape on me. It feels celebratory but not massively outside the realms of normal restaurant wear, which is exactly what I want out of a dress like this. It's going to get a lot of wear for date nights (this is the perfect pattern for a dinner dress) at all points of the year, and I also think it's going to be a really nice general summer dress. Assuming we get an actual summer this year, of course. I'm pleased to have rediscovered this pattern and am on the lookout for more double jersey or light ponte to make another one or two. Also it got me over the "cannot take photos of myself" hump, which gives it many bonus points. 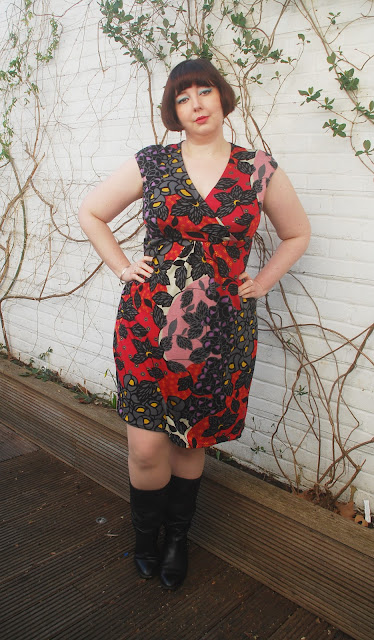 I'm not going to move back to a weekly schedule yet - I've learned my lesson there - but I do have some more photos taken and several projects cut out and waiting for me, which I may make into a short planning post. I'm trying to take the newly budding optimism and motivation and move it slowly through some simpler projects until I feel properly confident and inspired again, rather than diving straight back in to the various fitting challenges I eventually want to tackle. But there is more to come in March, and thank you for sticking with me!
Vogue 8724 dress
Fabric: Double jersey from Fabrics Galore
Cost: £15 (I paid £30 for twice as much as I used)
Pattern details: Mock wrap dress with pleating under bust, princess seamed back panels and choice of cup sizes
Size: 16 at the shoulders, 18 everywhere else, D cup pattern piece
Alterations: Neckline changed to bias facing, back princess seams taken in slightly
Would make again/would recommend: Yes/Yes
Posted by Jen at 10:00