My plans to go to Walthamstow are on hold for a couple of weeks. We are currently experiencing a horrendous heatwave and I am not prepared for my first time back on the Tube to be in 35C weather. It's also slowing down my actual sewing because our flat is unbearable right now and I'm hiding in the bedroom for most of the days. Not great for mental health, but necessary to stay not-fainted. Once the heatwave and subsequent week of rain are out of the way, I'll try again.

What I can share today is some of the fabric I've been sent by Minerva as part of their blogger partnership (this post is not part of said partnership, by the way - the posts I write for them go on their blog and since they found me through Instagram I'm genuinely not sure they even know this one exists). They had things on pause during lockdown but started up again last month, and I've asked for five things over the course of the past two months. This is way, waaay more than I normally take - up til the pause it averaged out at a bit less than one per month, but fabric is much less accessible to me than time right now. This is what I currently have, and what my plans are for each: 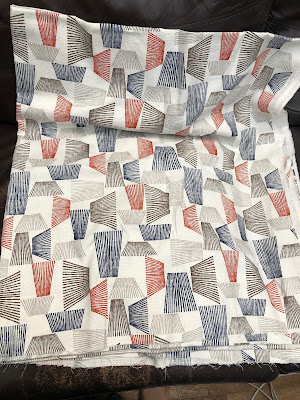 First and most importantly, there's this one. It's Cloud Nine barkcloth, one of my favourite substrates of all time. I used it to make this and this, and it's truly beautiful stuff. I bought both my previous lengths back in 2016 (even if I only managed to find a project for the second one last Christmas) and I've not really been in a position to afford it since, so when I saw it included on Minerva's list I jumped at it. This is the one I really want some advice on - I have three metres of this and I'd like to use as much of it as possible, but I'm having trouble visualising what it should be. I can see both a mod shift and overalls, but I definitely wouldn't wear a mod shift and I don't really think I'm an overalls woman either. Would love to hear some ideas! 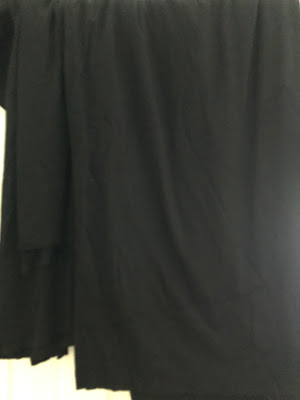 This is a black viscose jersey that I bought myself. I also have a plain black ponte that was sent to me, but I don't think anyone is going to benefit from multiple pictures of plain black fabrics. This one is intended to be a black summer dress, and the ponte is going to be a jogger/trouser hybrid (haven't identified the pattern yet) and a trial version of the Charm Pattern Hepburn top. 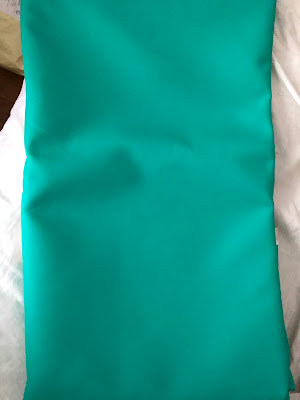 This is a bright jade faux leather that was a struggle to photograph correctly. I asked for this thinking I would make a bag out of it (I've always been drawn to handbags this colour), but my bag making experience is minimal and I might switch the plan around if I have a better idea. There is an incredibly stupid part of my brain going, "...leather jacket?" and I cannot let that part win. I can't have a queue of faux leather cuts waiting for me to find an acceptable jacket pattern, that might take years. 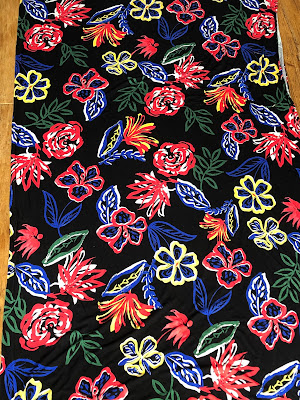 Finally, there's this viscose jersey which I've already used. I ordered it thinking it would be a maxi dress, but realised when it arrived that I already have several other quite specific maxi dresses planned and this one is similar enough that it would end up being redundant, so I made a Sallie jumpsuit instead, something I haven't done for four years because my beginner self had so much trouble with my second one. Turns out it's not that hard anymore. Here it is: 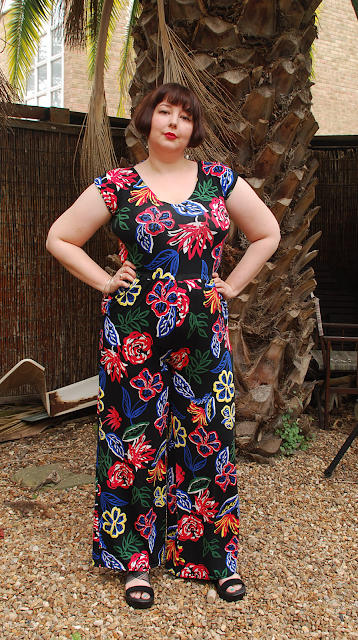 It looks a tad too short in this picture, but that's the fault of the shoes. I ordered what I thought were a similar pair to my apparently-discontinued holy grail Skechers sandals, and when they arrived I discovered there was a very significant heel height difference. I am just over six feet tall here and it's very weird.

I also have a blue stretch twill coming, which is going to be a pair of trousers (probably CCP Pietra). I really want some slim-fit trousers but it's a struggle with my thighs, so I'm hoping that a stretch fabric might give me what I want.

Sewing every day is still going well. Given the weather, sometimes daily sewing is minimal and sometimes it's prep that can be done outside the main room, but I have been making incremental progress and my robe is finally finished! I am absolutely not prepared to turn on the iron for love nor money right now so it hasn't had its final press, and it's too hot to wear even for a ten-minute photography session anyway, but once the weather breaks I will get it properly photographed and hopefully posted next week. My parents are coming to visit on Monday and Tuesday so it'll probably be mid-week again. Hope everyone is holding up!
Posted by Jen at 11:00

Email ThisBlogThis!Share to TwitterShare to FacebookShare to Pinterest
Labels: fabric