So I still haven't finished the Fiore skirt. My anxiety has gone full steam ahead and I'm doing this thing where I'm convinced I won't like it when it's finished, so if I don't finish it I never have to confront the failure. I don't know why I do this. I have legitimately stopped watching TV shows in the past because I heard that my favourite character dies and if I stop watching the show I can preserve them alive forever, or some such nonsense. I'm doing my best to work past it, but in the meantime, here's some scraps projects I made a few weeks ago. 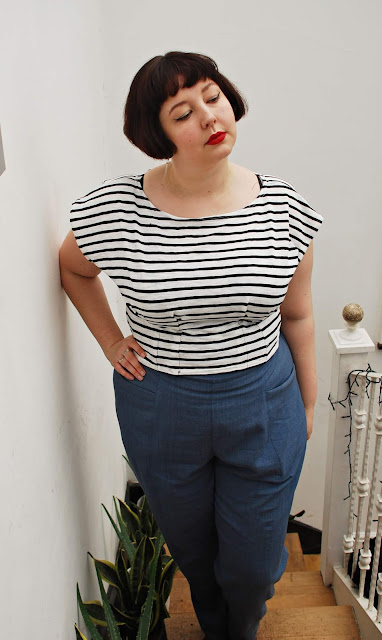 I made a top using the By Hand London Anna bodice and a small fabric offcut several years ago, and at the time I said I wouldn't do it again because it was a bit weird. But that top is still in my wardrobe, and I wear it all the time in the spring and summer. It does require super high-waisted trousers, but that's basically all I own these days. So when I went through my stash and found three extremely small pieces of jersey I knew I'd never be able to make into an actual T-shirt, I decided to knock up a few more weird Anna tops. They're all the same - lengthened by about eight inches, neck finished with a bias strip topstitched to the inside, wide hem turned up and stitched. 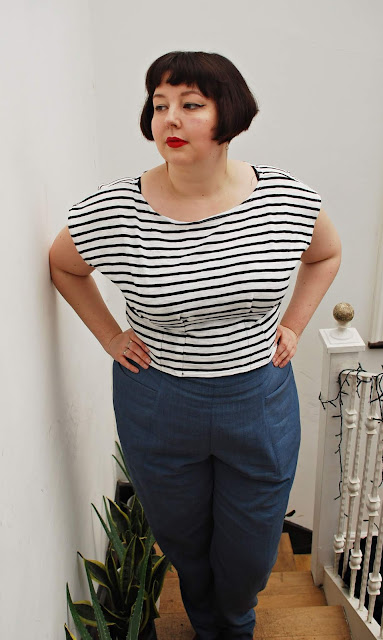 I found this one in the Abakhan bins and was planning to make an exercise T-shirt out of it. As you may know, I get a bit overexcited when I go to Abakhan and don't always check things properly, and this was one of those times. In order to have enough length for a proper T-shirt, the stripes would have to be vertical. I'm sure that can work, but it's not what I wanted. So it's been sitting here waiting for me to think of something else or get rid of it. I have actually worn this for exercise a couple of times, doing dance classes on Instagram Live in high-waisted leggings. 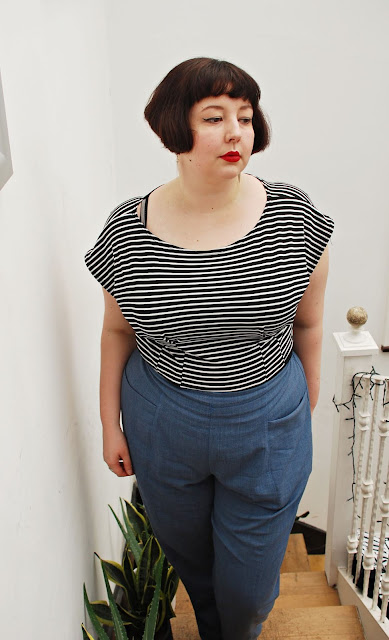 This is a piece of light ponte I picked up at Walthamstow. Annoyingly, I had my fabric records mixed up - I thought this was a scrap I'd picked up at a fabric swap, and I only realised it wasn't after I'd cut this out and had enough left over to cut the same thing again. This could have been a proper T-shirt. Gah. But I cut the same again anyway, and I'm going to try and make the second one into a dress with some black fabric of indeterminate composition as the skirt.

Whatever happened to that scrap from the fabric swap remains a mystery. 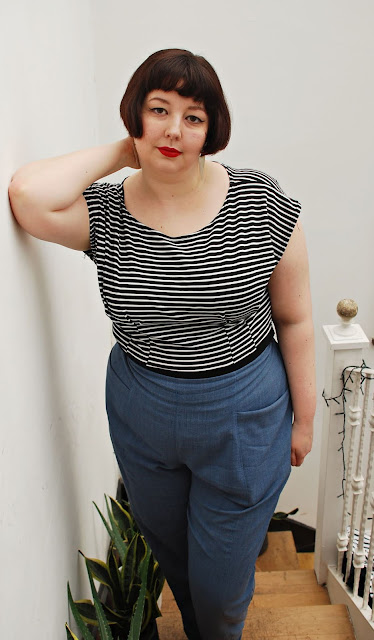 For some reason this one came out slightly shorter than the other two, so even with high waisted trousers it shows a little more skin than I'd like. All my Anna tops ride up a bit during general wear, but all you get is a very tiny sliver of skin showing which I quite like. If there's skin showing as soon as I put it on, however, I end up in a much less comfortable place after twenty minutes or so. I've been wearing it with a cami underneath, as you see here, and that's fine but does mean I have to put slightly more thought into getting dressed than I'm really prepared to do right now. 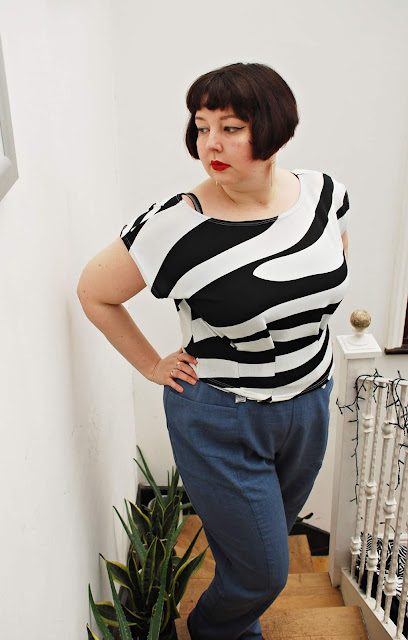 And finally, we have my favourite! This was another Abakhan bins purchase, except this time I was well aware that it was super tiny and I probably wouldn't be able to do much with it. But I couldn't leave without it. The print looked similar to the second dress in this post (also an Abakhan purchase) and when I saw it I thought it was the same stuff in a different colourway, but it's not at all. This looks and handles like a lightweight viscose jersey, except it's sweater knit. It's the weirdest thing. 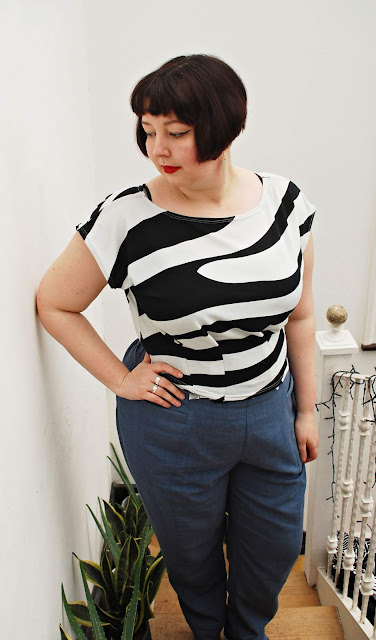 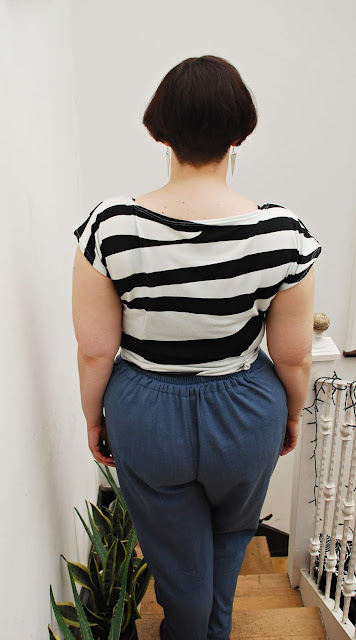 This is the one that I'm really getting wear out of. I keep talking about needing to look like I've put more effort into my clothes than I have for the sake of my sanity, and this is exactly that kind of top. It's super comfortable and once I've put it on I don't really need to think much about the rest of my outfit. Especially good for pretending you've dressed up for a Zoom call. 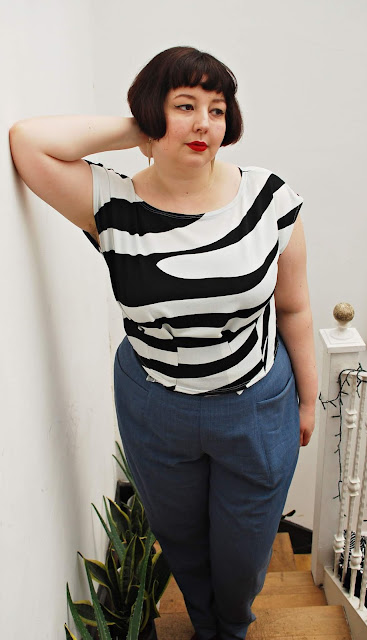 I'm hopeful that I will be able to finish something this weekend. Even if I have to put the skirt to one side for the moment and cut out something else. I really don't like not being able to sew, it makes everything that much worse. The chambray I ordered has turned up but it's not quite the colour it appeared in the listing. I don't really want a jumpsuit in the strange mid-blue that it actually is, so I might have a look through my pattern stash and see if there's an experiment I can try with it!
Posted by Jen at 11:00