Two posts in a week! I very rarely do this anymore, but while everyone's stuck indoors I thought it might be worthwhile. I need things to occupy myself with and other people need non-terrifying things to read. I'm trying to see how far through my stash I can get over the next few weeks, and if that goes well I should have a decent amount of stuff to share with you. Especially since, as it turns out, overlockers are really fast.

The other week I had had a very productive sewing day, in which I had finished two tops and made three pairs of leggings, and was sitting on the sofa after dinner while my boyfriend was in the bath, idly planning what I needed to do tomorrow. I opened up the instructions for the Kommatia Patterns DR305 (already cut out and waiting), saw there were literally four bullet points, and thought "I might as well just do that now."

Twenty minutes later, my boyfriend got out of the bath to find me holding a finished dress. 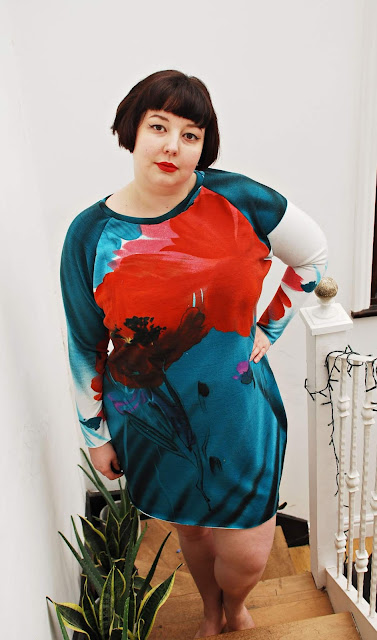 I was one hundred per cent convinced I was going to hate this dress. I thought the style would be unflattering, that the print would look stupid, that I would deposit it immediately into the bin having seen how I looked in it. And... I do not hate it. I don't love it either; I can't imagine where I would wear this and it's not really my style. Also I seriously messed up the neckband. But I will wear this at home and be happy to answer the door in it. I think there's something oddly charming about it. 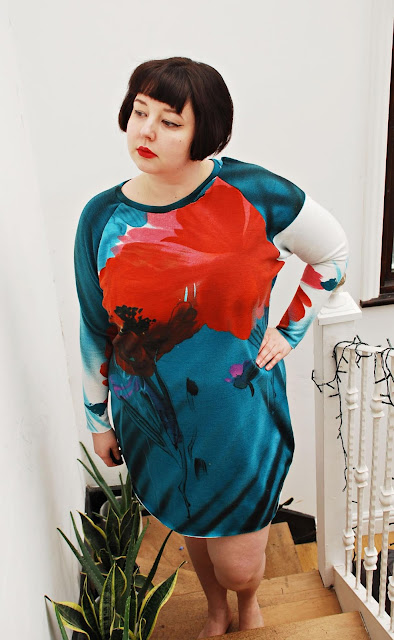 Pattern placement was a tricky one. My body is simply not wide enough to fit both large centrepiece poppies on (few bodies would be), so I tried different things on the front and back. On the back I centred what I think is the "main" flower with the stamens, but I didn't want to do that on the front in case it a) did weird stretchy things across the boobs and b) looked like I was just a fan of this particular poppy and had gone and bought its merch. I set it off-centre instead, which was a better idea but I think could have done with being shifted slightly. It doesn't bother me hugely though. 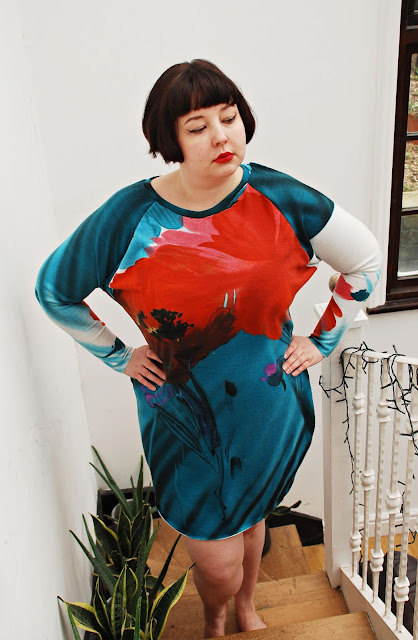 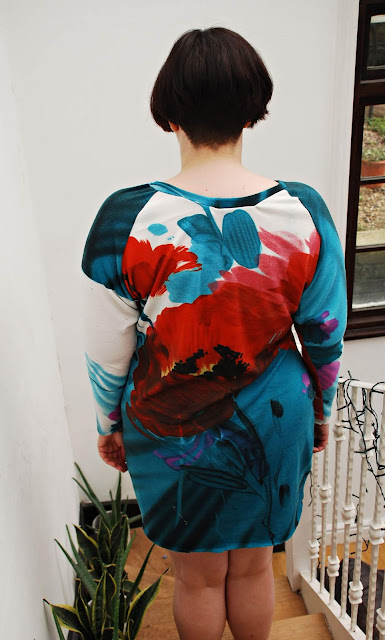 This is not how the dress is supposed to fit. I cut an XL in the top half and invented some new sizes below the waist. I absolutely made the hips bigger than they should be proportionally to the top half, but this way I will actually wear it. It's also one of those dresses that uses the same pattern piece for the front and back, so I slashed into it to give me about an inch of extra room at the bust. I also added two inches to the length and I was very grateful for it. 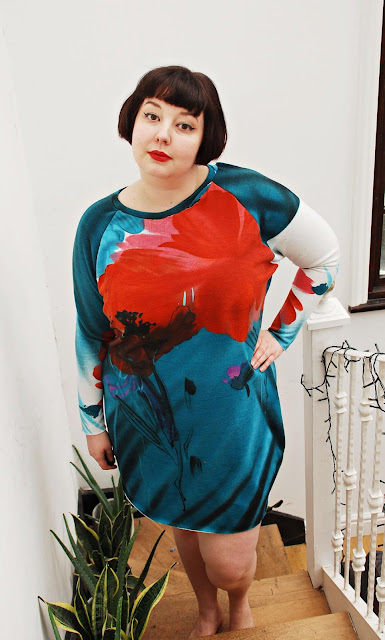 I was encouraged enough by the result (and the speed!) to cut into something I've been holding onto for quite a while. 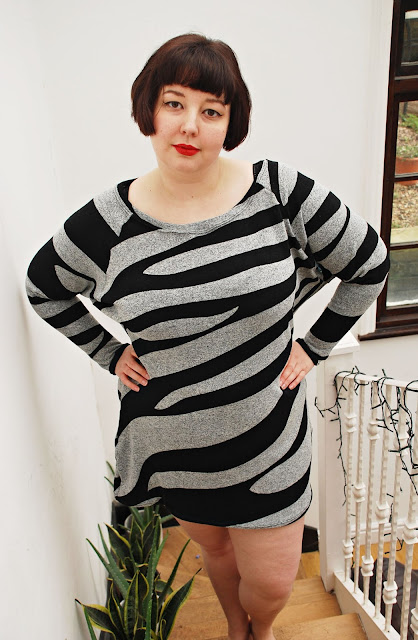 This is a super-soft piece of sweater knit I got in the Abakhan by-the-kilo bin ages ago, and I could never quite work out what to do with it. I didn't want to give it a waist seam and cut into the print, I didn't think it would work as a form-fitting dress, and I rarely if ever wear loose-fitting clothes. When I realised that this dress pattern would let a print sit fairly undisrupted, I decided to forge ahead and get the fabric into my wardrobe. 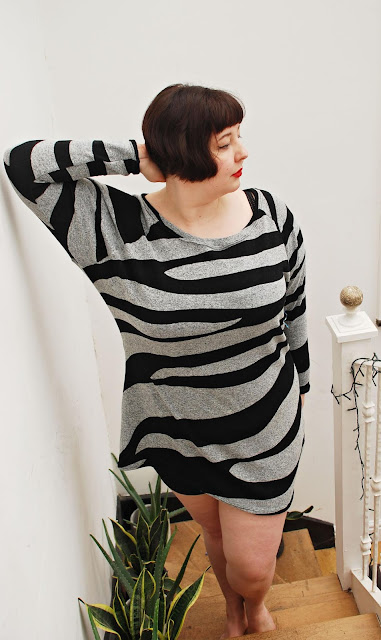 This isn't exactly what I wanted it to be. Mostly because the fabric, which I thought would be pretty well-behaved, became a horrible clingy nightmare when I put it on. This dress is the same length as the previous one, but because it's so clingy it looks several inches shorter. I don't have a picture of the back because there was an unfortunate hungry-bum issue in the photos I took and I decided to spare you that particular sight. 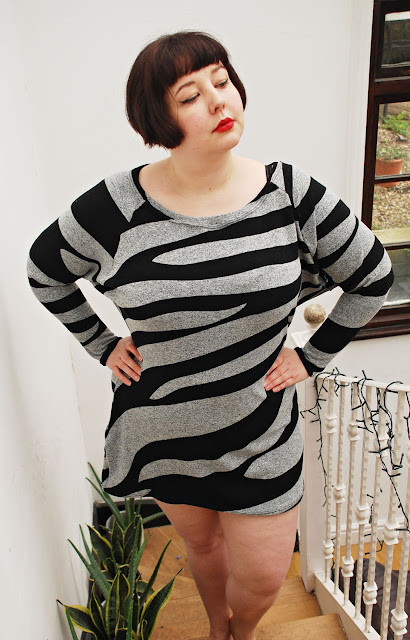 I do think the style of dress works well for the fabric, and I'd really like it if it wasn't for the clingy/extra short thing. I'm almost tempted to try wearing it with leggings, which is a thing I never ever do but after sitting on this fabric for so long I'd hate for it to go to waste. I'll give it a try over the next couple of weeks, while nobody can see me (other than Patrick, who has seen me in far worse states than this) and see if it's comfortable. If it is, I'll have a go at wearing it outside once that's a thing I'm allowed to do again. 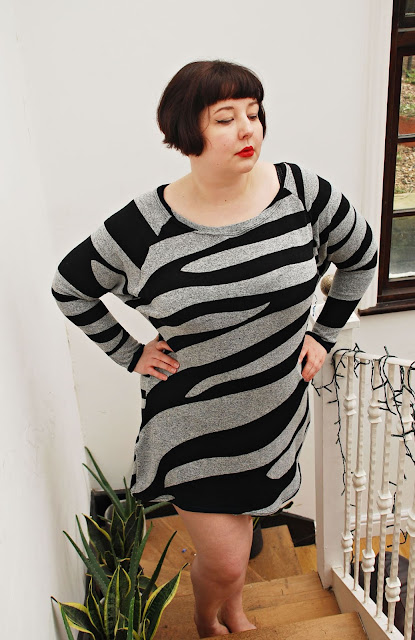 I'm reserving judgement on whether I'll make this again. I think the style is nice and it's an excellent super-fast project, but if I don't wear either of these out of the house then I'm unlikely to decide to make a third. I hope I do; it's great to be able to make an entire dress with 1.5m of fabric and I think I'd be more likely to treat myself to nicer fabric if I didn't have to budget for so much of it. I'll report back in a few months' time! 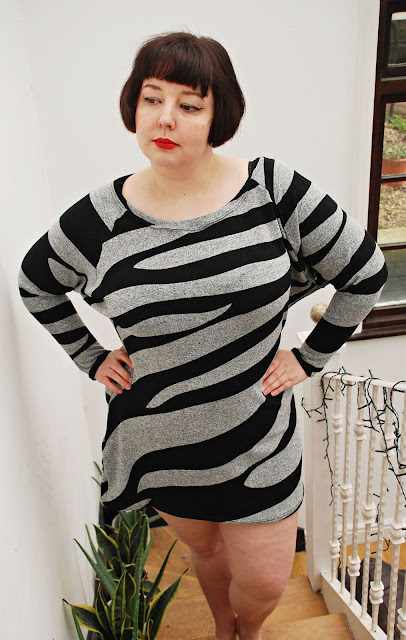 Up next will most likely be my Gemma sweatshirts, and I'll try to keep up a twice-a-week posting schedule until I'm out of quarantine. I'm asthmatic, so it might be longer for me than for others, but I'm really not sure yet.

I also want to say (mainly to my fellow GAD sufferers, but also to anyone) that this is an absolutely rubbish time for those of us with spiralling brains, and I'm officially making myself available for mutual support. If anyone needs to be distracted, wants to set some kind of daily challenge or join in with my photography one, or just would like to type AAAAAGGGGHHHH at someone and have them type AAAAAAAGGGGGHHHHH back, message me on Instagram @the_slapdash or email me (address on the Contact page at the top). We can do this.