So this is the only other thing from my spring plan that I actually managed to do, and it's really not very spring-like at all. It's been a difficult few months; I've been ill, I didn't cope with bereavement well and nothing's been going to plan. The fact that I managed to keep sewing and making things is quite an achievement, even if I didn't make what I thought I was going to make. Now that a bit of time has passed, I have a much better doctor and a more encouraging treatment plan, I think things are starting to move in the right direction again. Yay.

With that out of the way, here's what my red fabric became. 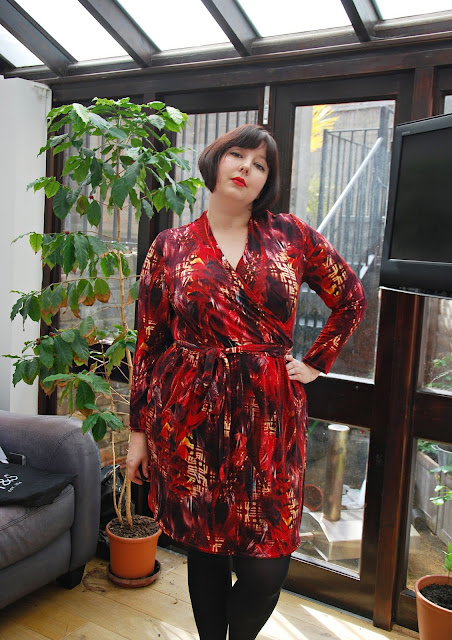 I completely thought I was going to make a summer dress, but instead this happened. Two main reasons: one, this fabric is actually quite snuggly, and there's a very limited temperature window to wear snuggly summer dresses; and two, I love this fabric so much and didn't want to waste it on something I wasn't sure was going to work. I decided to make another Named Olivia, because after having a minor crisis about my first one, it's now my absolute favourite dress and I wear it as often as I can get away with. So I wanted more. 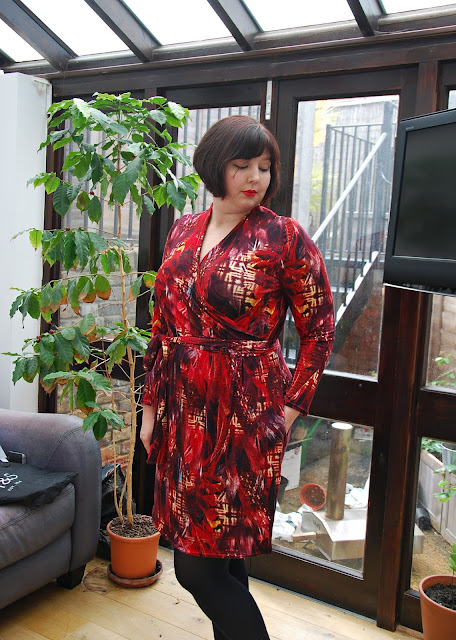 This fabric is effing BEAUTIFUL. It's so difficult to find the bright saturated colours I like, and this is not only a perfect shade of red, it's also a secret rainbow. You see red first, then purple and yellow, but if you look closely you can also see tiny amounts of bright blue and bright green. I could just stare at it forever. 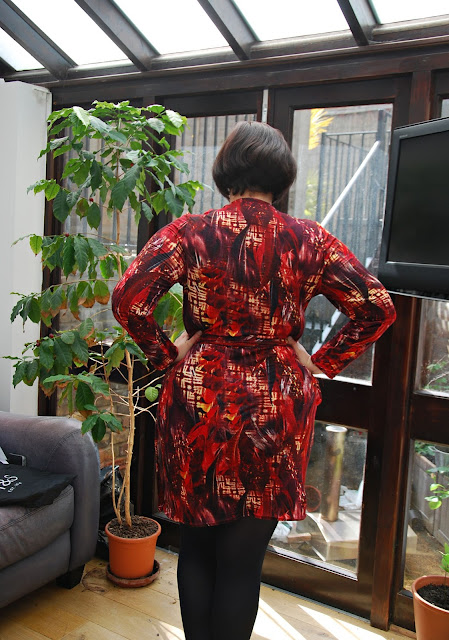 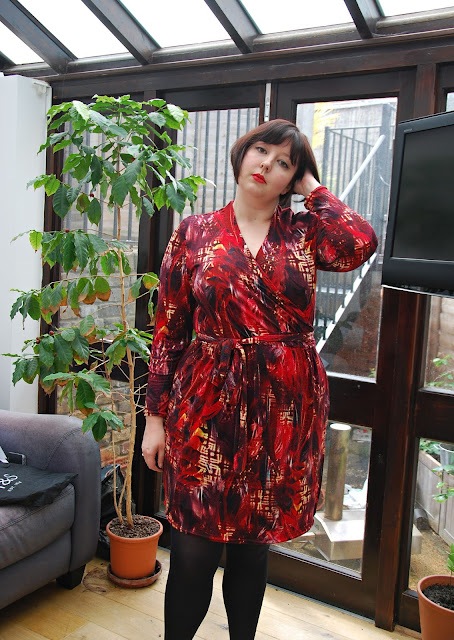 Construction was more or less the same as last time, except the front is actually the right way round because I was paying attention. I shortened it a little bit from the original length because it hits at a funny place on my leg, but not as much as last time. I really didn't want to cut any of this fabric off. 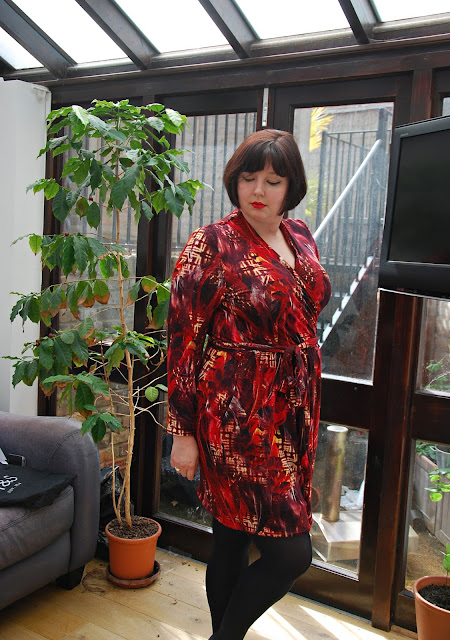 In conclusion, I love it and this was definitely the right thing to make. It's currently too warm to wear it, but given that this is England, that's not going to last too long. A few degrees cooler and I think I'll be able to wear this pretty much anywhere.

I was so excited about the idea of making a wrap dress when I first started dressmaking. My second ever post on this blog was about how much I wanted ALL THE WRAP DRESSES but was terrified of jersey (oh, Past Jen. You had much to learn, but not in the way you thought you did), then I learned how to sew knits and... really didn't make very many wrap dresses. I've wondered about this on and off, because both my Ultimate Wrap Dress and my Appleton are still in my wardrobe and get worn semi-regularly, and yet I've never been inspired to make more. Turns out it's because the patterns aren't quite right. Who'd have thought? For everyday wear I don't want a dress where I have to keep checking on my cleavage or wear a vest top underneath (I literally cannot wear the Sew Over It dress without a top underneath; it doesn't stop me because I still love it, but it doesn't encourage me to make another one). The Olivia feels like my dress; the wrap is high but not frumpy, the shape is right, the skirt feels secure, and it has pockets. I have found the elusive TNT.

The red dress was actually my third Olivia; to save us a whole other post saying basically the same things, here's the second one. 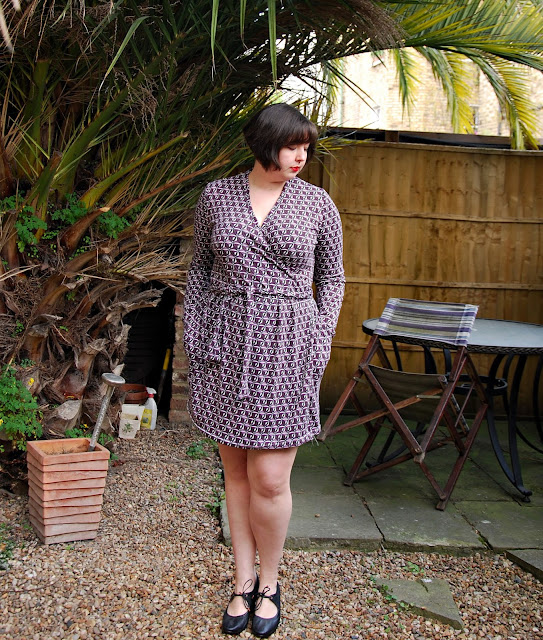 This jersey is another one that turned up in a package from The Textile Centre that I'd ordered at stupid o'clock in the morning. I didn't have any plans for it, and I only worked out what to do with it once I'd made my leopard print dress and discovered I really liked the 70s vibe (I may have just bought another four metres of that leopard fabric. I LOVE IT). 70s print wrap dress? Why not? 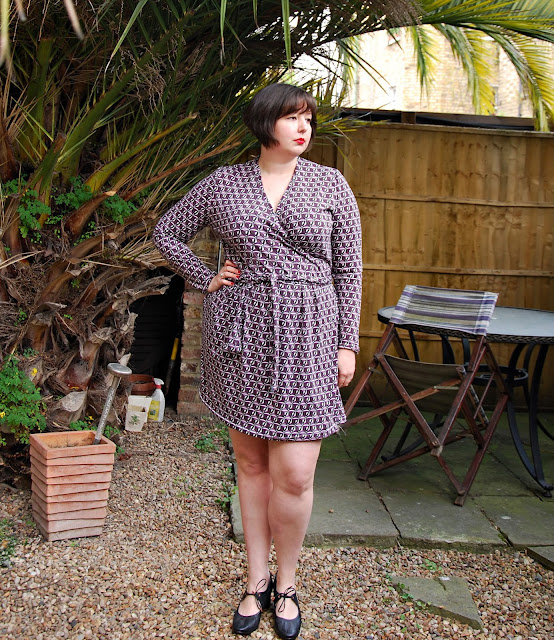 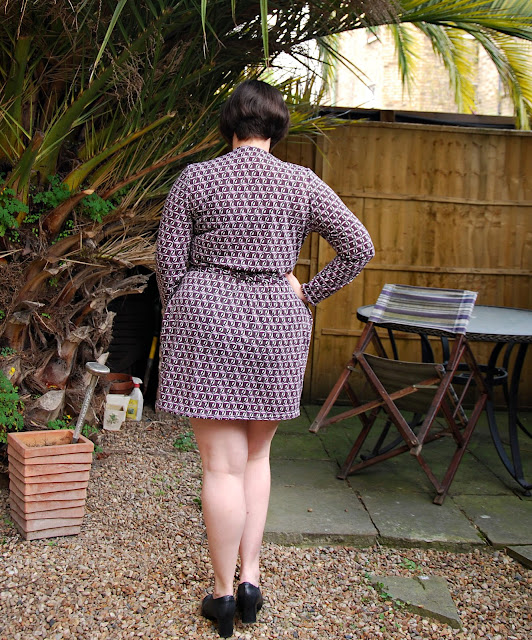 This is a bit muted for my normal style and I won't wear it as much as the other two, but I do think it's cute. It's definitely the best thing I could have done with this fabric. Sometimes it's nice to wear something that has a bit of a different vibe; it reminds me that I'm not locked into a look and can try out anything that takes my fancy.

This will not be my last Olivia - I fully intend to live in them come the autumn - but I'll try not to bore you by repeating myself too much. 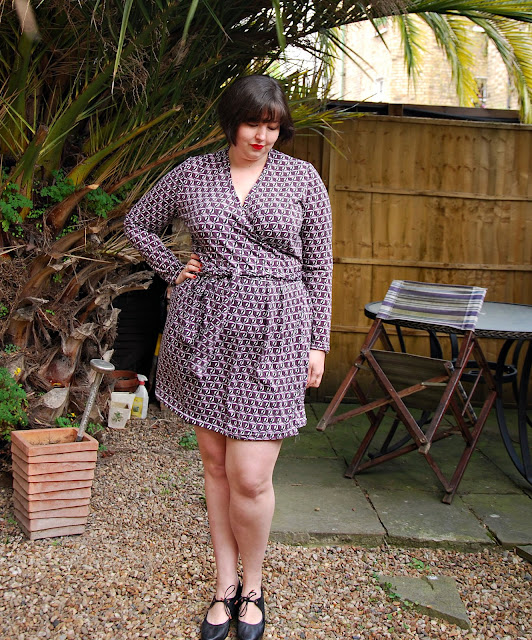 One day I will be able to smile naturally in a photo. One day.
Posted by Jen at 10:00