In terms of woven garments, so far this year I've made a coat (which went well), a skirt (which seemed like a great idea but in practice I don't actually like), and part of a dress (which was a disaster and is now sitting waiting for me to work out if I can save it). Everything else has been jersey dresses and a couple of tops. Since that is what I tend to wear most often it's not a problem, but it has left me feeling like I'm in a bit of a rut. So it was time to mix things up a bit. 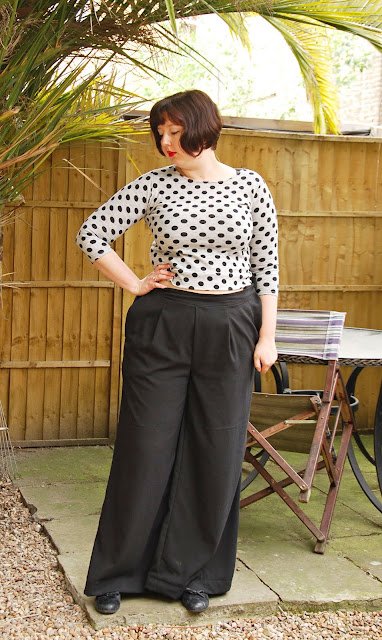 These are the Flint trousers by Megan Nielsen, a pattern I loved as soon as I saw it. When she had a 20% off sale I ordered it directly from her website, reasoning that even with shipping it was still slightly cheaper... and then I got charged £12 customs, making this the most expensive pattern I've ever bought. Sigh. I don't know how common the customs thing is (I got charged the one time I ordered Decades of Style patterns too, though my boyfriend insists that low-value items like this aren't meant to be subject to customs charges), but it can't have helped that the pattern shipped out in a massive box packed with cardboard bubble wrap type stuff. "Hmmm, a box. Looks valuable. Better charge for it."

Since my trouser-making experience is limited, I wanted to make a toile first. 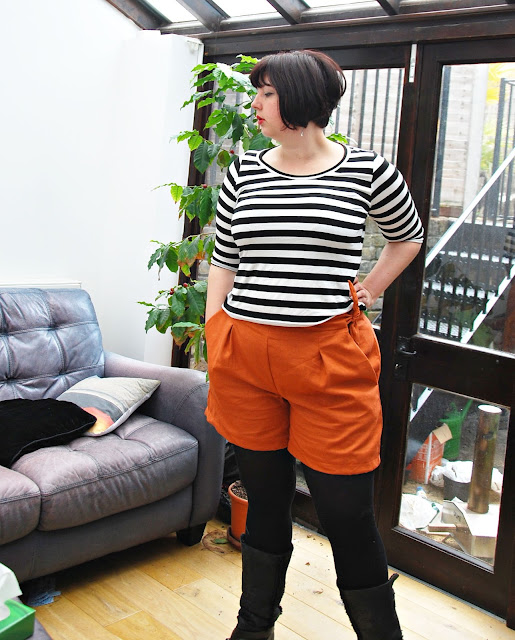 Here is my toile, made of the worst fabric in the entire world. Try as I might I could not capture its full hideousness on camera, but please be assured that it looks MUCH worse than this in real life. The place I ordered it from called it "terracotta", which I presume is a typo for "paper church decorations constructed by Brownie Guides for the harvest festival service". I used to be that Brownie Guide, and these shorts give me flashbacks. There are so many colours this could be that I would like - burnt orange, mustard, tan, the terracotta I thought I'd ordered - but instead I have this. Pumpkin sugar paper from the back of the art cupboard realness. It's also horrible fabric - scratchy and stiff, yet also wrinkles as soon as it senses you looking at it. It is the very worst of all linen qualities. I wore them for a day to make sure all was OK with the fit, and then I threw them away. 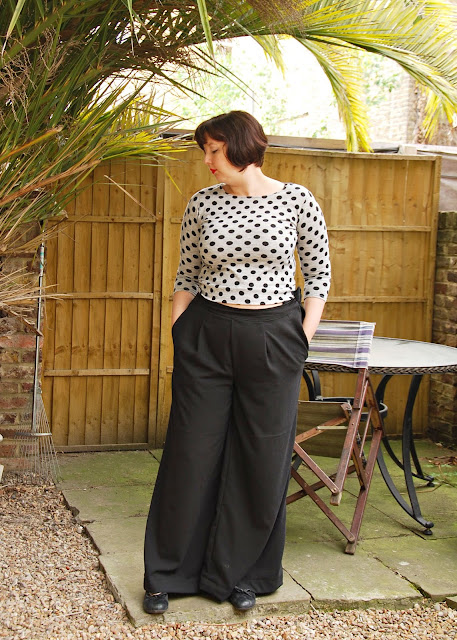 Having got over the mild fabric trauma, I decided to move on to a proper pair of trousers. The pattern is for shorts and cropped trousers, but my wardrobe can't really accommodate wide-leg cropped trousers right now, so I lengthened them (and graded them out slightly, because too much hip for the size range). This fabric is a really soft suiting I bought at Walthamstow Market - yes, it's black, which is super hard to photograph, but also I do actually need some black basics and I'm going to put a bit of effort into making them over the next several months. I've tried to lighten the pictures so the details aren't completely obscured. 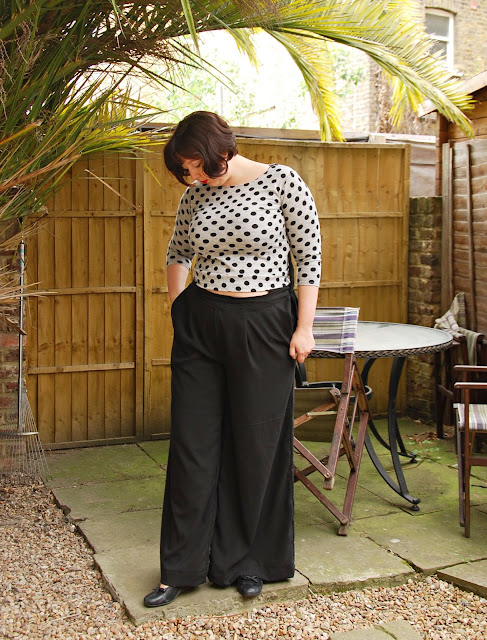 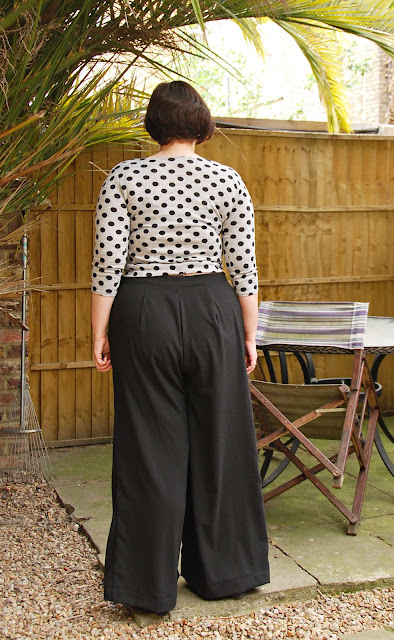 The pattern is well-drafted, quite simple, and really rewarding. Because they're loose the pain of fitting trousers is much reduced (I'm still planning on a properly fitting pair but I am having body image issues right now and can't face it), and they can easily be made up in an afternoon. And the design is fantastic - it works as a basic item in a normal wardrobe, but it's also detailed and different. The waistband wraps over at the left side, and the left pocket is half-open to allow you to get them on. There's an internal button (or press stud, in my case) holding them closed, and then they tie together at the top of the pocket. It's stuff like this that makes me not resent making basics, and I need more patterns like this in my life. 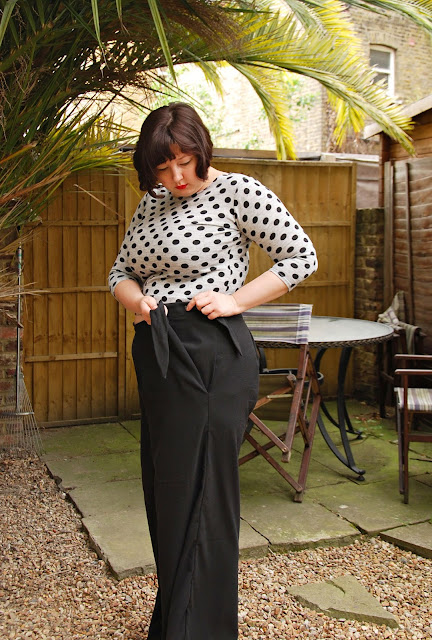 I almost never wear trousers these days, so I'm going to see how much wear I get out of these before I decide if I make another pair. I hope I do, because I enjoyed the process of making them so much that the eventual outcome was almost beside the point. It was one "oh, that's cool!" after another. I do really like these, though, and I think they'll be useful. I can wear them at the weekend without feeling like I'm dressed for temping, but equally I could wear them to work and they wouldn't look weird or out of place.


One thing I would like to do is remake my toile. A pair of orange shorts would actually be a great addition to my wardrobe if I could find orange shorts-appropriate fabric that didn't upset me down to my very soul. My new mission will be to find some, and banish the memory of that harvest festival tablecloth stuff for ever and ever. It's possible I'm being a touch dramatic, but it's really nasty fabric, OK? 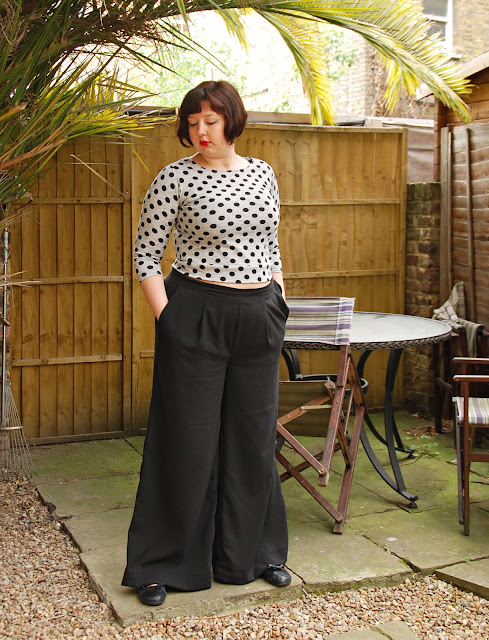 But these I like. Applause to Megan Nielsen! And now back to your regularly scheduled dresses.
Posted by Jen at 13:00