(Couldn't immediately think of a pun, so generic pun placeholder it is. Sorry.)

I never thought I'd find myself paying £14 for a T-shirt pattern, but here we are. 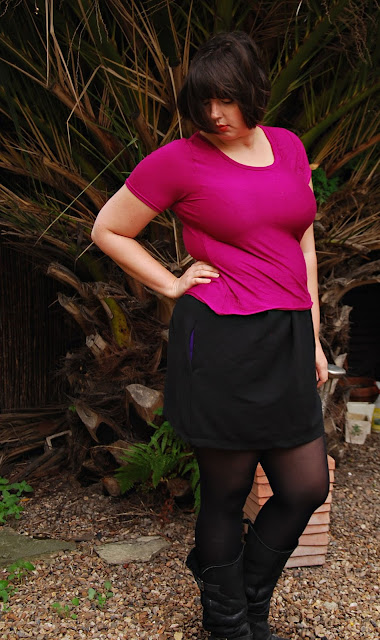 When the Concord was first released, I took one look at it, scoffed quietly to myself," said "£14? I don't even spend that on actual T-shirts" and closed the tab. But then I started to see people (people who are often quite critical, at that) saying that they'd made it and it was the best T-shirt pattern they'd ever tried. I'd been wondering about my extreme lack of tops and whether the lack of a decent base was a problem. Sure, I could futz about with my Gertie cropped sweater pattern until it was a perfect fit, but a) that would take ages because I'm not very good at this yet, and b) I would probably end up not bothering because too much hassle. Over the course of a month or so, the prospect of spending £14 on a decent knit block that I could modify into other things seemed less and less outrageous until I finally gave in and bought it. 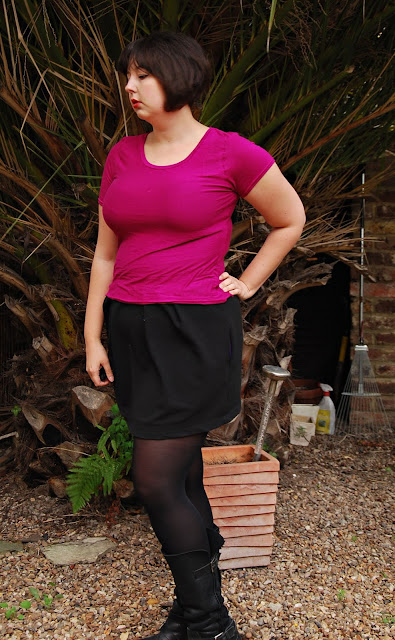 I used some fuchsia jersey that I bought on Goldhawk Road a little while ago. It was a massive pain in the bum to cut, which is especially irritating as I bought it in four different colours. It was also way narrower than any other jersey I've ever bought - it didn't occur to me to check because I've never seen jersey less than 140cm wide - so I don't have enough of the other three to make the things I was planning, and I am absolutely not going to buy any more of this. Ugh. I'll try to work something out. 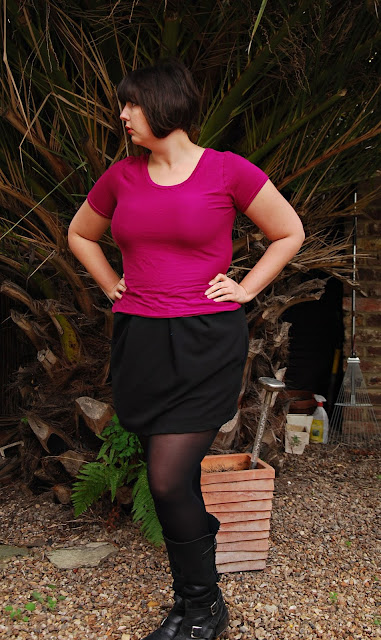 My plan was to make the long-sleeved version, but as this jersey was unexpectedly super narrow I could only get the short sleeves out of it. Since the main purpose of this first one was to get a sense of the sizing and what else I could do with it, that didn't bother me too much. In most patterns I've made with a top part the necklines have been too wide and the backs have been too baggy, so I brought the neckline in a bit at the shoulder and took a wedge out at the upper back when cutting out. I cut the 12 E/F cup, which is my usual Cashmerette size. I was really short on fabric so the sleeves are hemmed rather than cuffed. 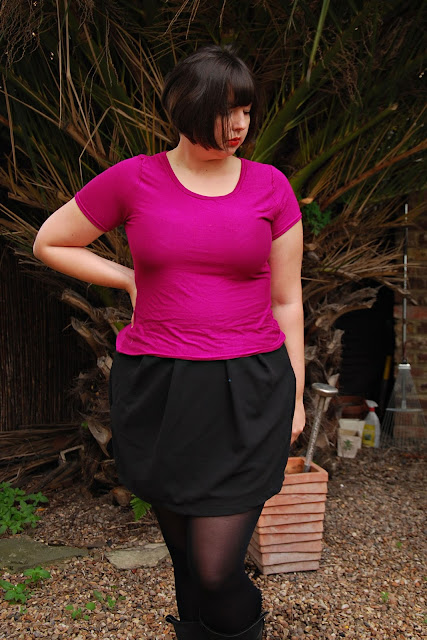 Cashmerette continues to produce some of the most user-friendly patterns I've ever worked with. They just... work. I knocked this up in about an hour while feeling sick, and it was fine. I made the cropped version, which is slightly longer than I expected, but then I am incredibly short in the waist. For use as a block, I'll need to shorten it a bit for the inevitable cropped sweaters that will be coming your way very soon. I'm so dull, I'm sorry. I keep looking for more interesting tops but I almost never see ones I would actually wear.

(Also tulip skirt, made it, is crepe, has orange zip, like it, made three at once because knee-length tulip skirts and black tights doesn't look right for autumn/winter, more to come, sorry about that also, won't have their own posts I promise.)

Shortly afterwards, I decided to have a go at adapting the pattern into a sweater. 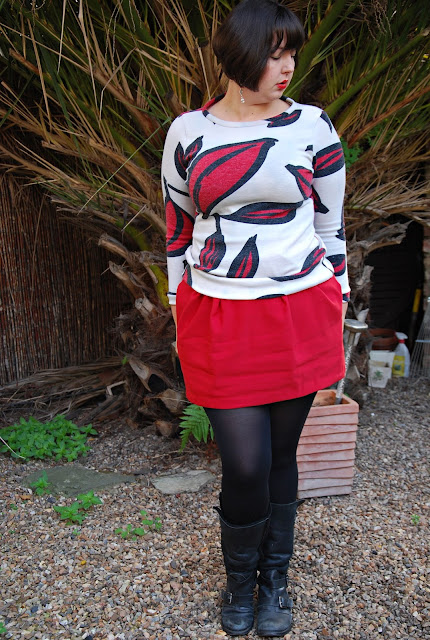 This fabric is a faux angora knit from The Textile Centre, which I recently discovered and is one of my new favourite places. I love browsing online but the fabric is usually much more expensive at places which offer that, so it's nice to be able to get stuff at Walthamstow Market prices without always having to drag myself up to Walthamstow. And they do sweater knit-type stuff, which I am currently obsessed with but can't find very much of.

Using a wider width fabric it was easy to get a long-sleeved top out of 1m of fabric, even with accidentally cutting the back piece the wrong way initially (though thanks to that I did end up having to make the sleeves a couple of inches shorter). I cut the high neck bodice, sized up and went up a cup size to give me room to wear things underneath, and cut a band for the waist as well as the neck and sleeves. It went together as easily as the T-shirt, though in future I'll take a bit more out of the back neckline and neckband as it has a tendency to stand slightly away from my body. 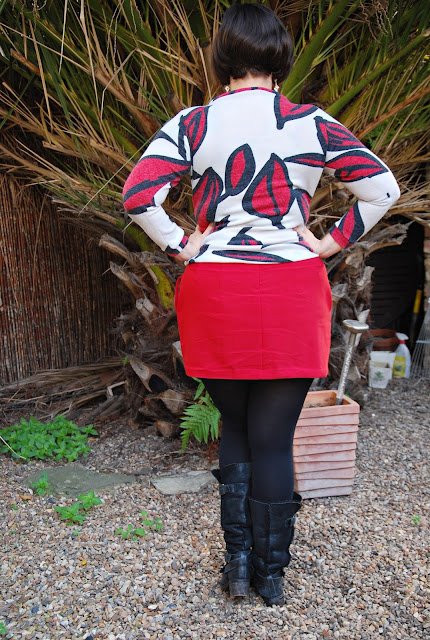 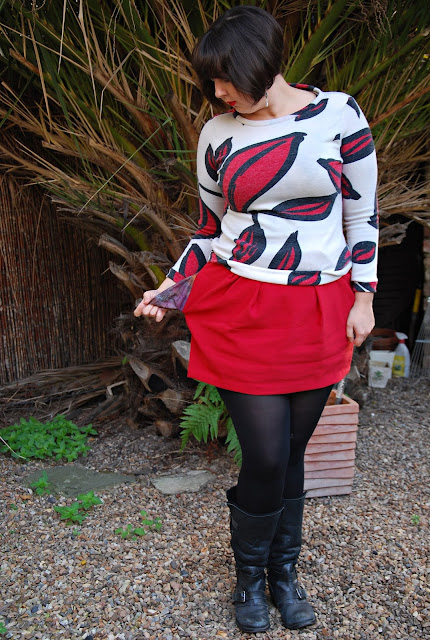 I am going to talk about this tulip skirt for a minute. This was what I planned for my third ever tulip skirt back in March - bright red stretch cotton, contrast pockets, added lining. I got it almost finished but then discovered it didn't fit, and I have never been able to work out why. All my other skirts have been fine, but the zip just would not close on that one. I got super frustrated, took it apart, made it up with a smaller seam allowance, still too small, got extra frustrated and threw it away. I picked up a piece of similar if not identical red stretch cotton in a remnant bin a little while ago, repurposed some lilac/mushroom polycotton from my stash into a lining, and my red skirt is finally a reality. Also it goes really nicely with this top. 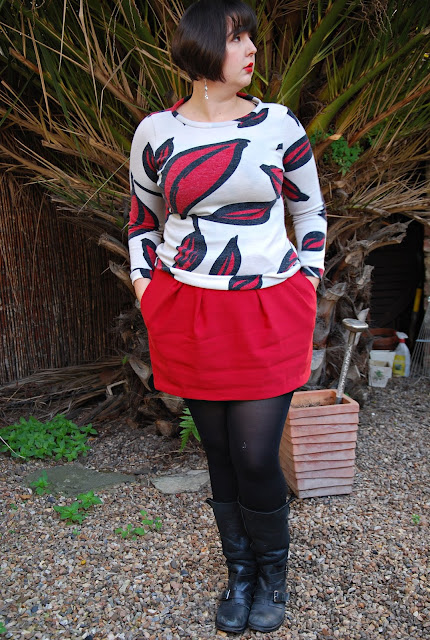 My wardrobe has been suffering from a huge overdose of grey and black tops, so this is exactly what it needs. I hate winter slightly less in this jumper. I will make more colourful jumpers when I can find the right fabric (damn you, pretty coloured but rubbish jersey sitting in my stash). The search is on. 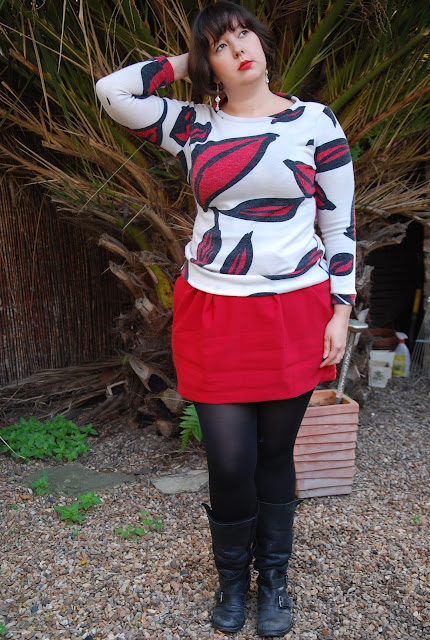 (I tried my best to look like I was okay standing outside without a coat in this bastard cold weather we're having, but it seems my best isn't good enough. Sorry about the misery faces.)
Posted by Jen at 10:00