It's mid-November, the worst possible time of the year except for all of January, so what we need now is comfort clothing! 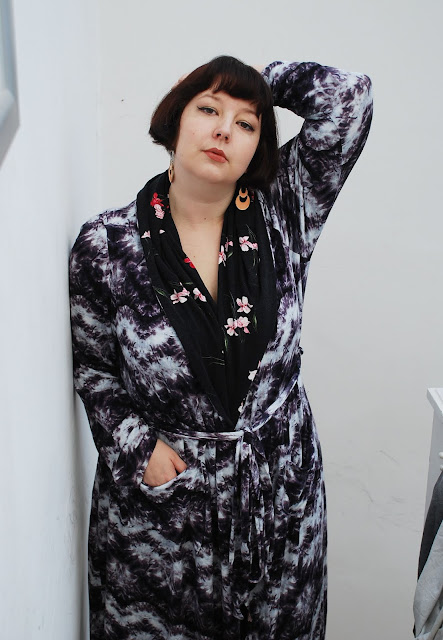 I love my Asaka kimono, but it's not ideal for really cold evenings, so I've been continuing to wear Patrick's ancient fleece one, despite three failed attempts before, during and after making his fancy new robe to make a replacement for myself. My criteria were simple: I wanted a pattern designed to make a stretchy, cosy garment, and also I never wanted to sew a shawl collar ever again in my life. M7516 came up in my searches and I decided it was the one. Since it came with a hood, I could have the shawl collar effect without having to... do all that stuff I never got the hang of. Yay! 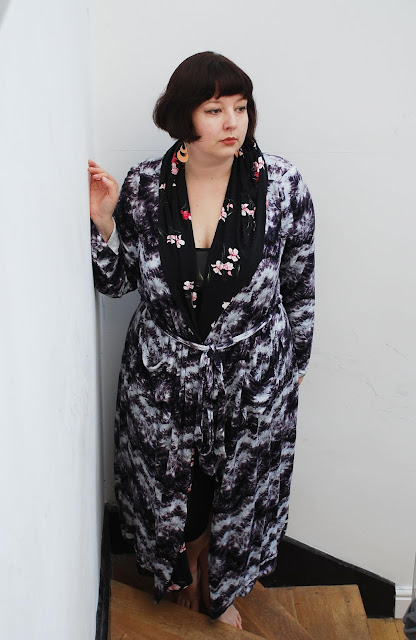 All in all, the pattern turned out not to be ideal and I had to make several alterations to it. It came with neither pockets nor belt loops (WHY do so many patterns of this type not come with belt loops?? I WILL LOSE THE BELT WITHIN MINUTES, GUYS), and I also changed the length quite significantly. The fabric requirements specify 2.5m of the main fabric, and I bought 3m with the intention of also getting patch pockets, the belt, and as much extra length as possible out of it. Which I did. My robe is approximately 11 inches longer than the pattern and I think it's about right for what I pictured. I also added a bit of length to the sleeves. OK, I added waaaay too much length to the sleeves, ended up with some kind of weird Slenderman thing, and cut them back again. This is still definitely longer than the pattern but I'm not sure by how much. I really hate too-short sleeves in dressing gowns. 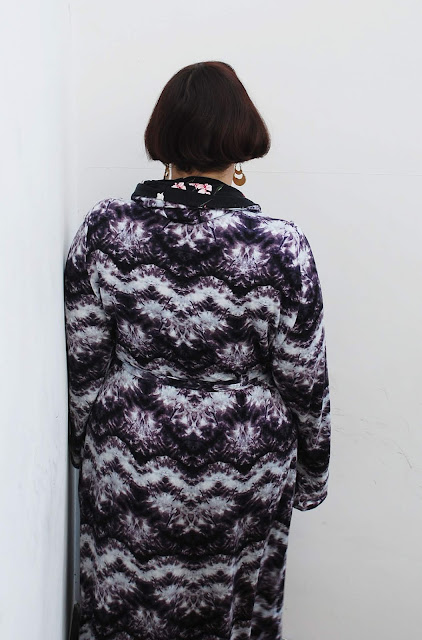 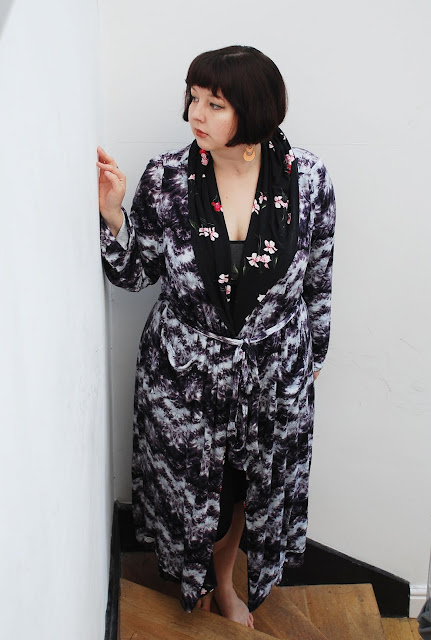 My main fabric is a French terry I bought from Girl Charlee. I've only bought from them once before and my experience was mixed - both fabrics looked and felt lovely, but the cotton spandex blend washed very poorly and didn't have great recovery. The sweater knit, though, is still going strong, so I thought I'd take a punt on a third substrate. This one is lighter weight than I expected but very soft and snuggly, and I don't have any complaints about its quality so far. I'm tempted to order a few swatches to try and get a better overall read on what I can expect from them in general. 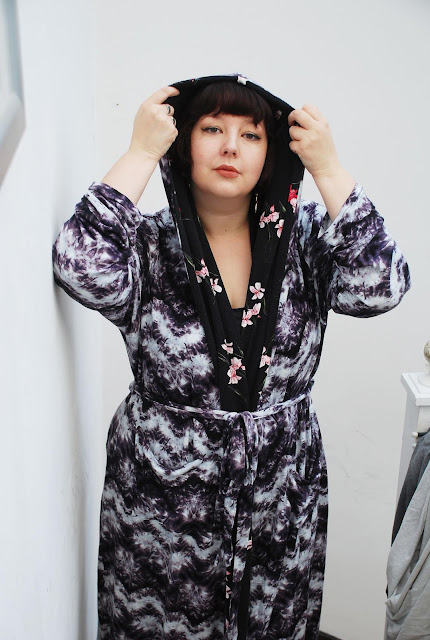 The black floral I used for the lining isn't the perfectly contrasting jersey I might have chosen, but I had this in my stash and figured that barely any of it would show so why not. The pattern instructs you to cut the belt out of the contrast fabric as well, but I don't like the way that looks and never intended to do it. I think I assumed that there would be some kind of facing along the dressing gown's opening to be made in the contrast fabric, and I thought maybe I would be able to squeeze it out of my main fabric. However, there is not a facing. You just cut the entire front piece again. The dressing gown is therefore two-thirds lined, which I find... weird. I suppose it does make it a bit warmer. 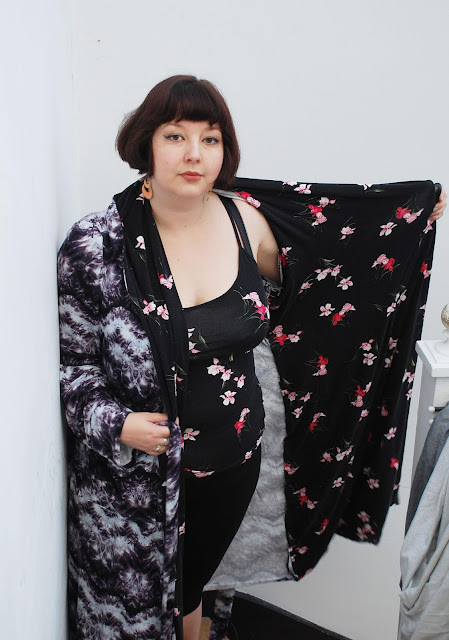 Construction was pretty simple, and if we discount the time I took to unpick a seam I'd sewn between two edges that weren't meant to go together, it only took me about three hours. I put the belt loops in at the smallest point of the waist and added the pockets about an inch below that (one of them is a bit wonky, but it's not repair day yet so correcting it is going to have to wait). Pocket-wise I just cut two squares from the largest scrap I had left over after cutting everything else, so I'm not actually sure how big they are. Big enough for my phone and a bunch of tissues, which is all they'll ever need to hold anyway. 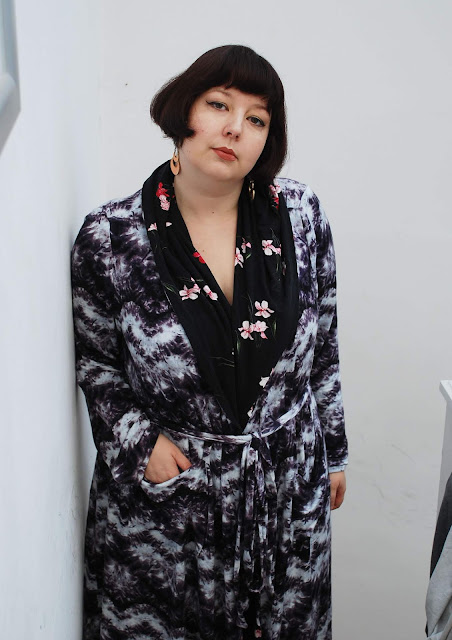 I also made another So Zo cami from the same material, which I'm wearing here because it matches and I think it's cute. I am also wearing an old pair of capri-length exercise leggings, which are much less cute. I don't have masses of this floral fabric left, but I am considering using it to make a pair of shorts. I've never had a desire for lounge shorts before, but all my full-length pyjama bottoms look weird under this dressing gown (probably in part because the patterns and colours don't go at all) and a matching black shorts-and-cami set would probably be a nice (and space-economical) idea for weekends away. 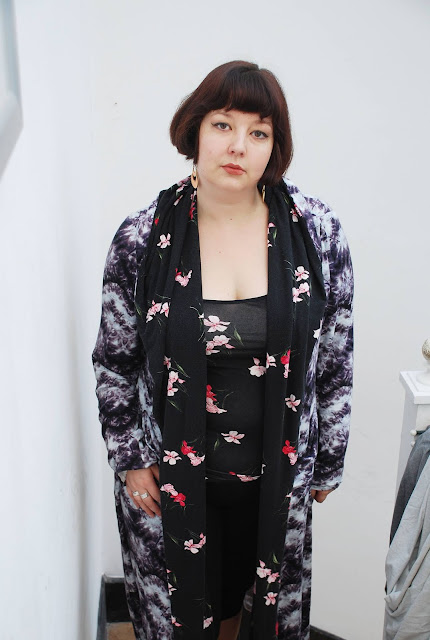 For what I wanted - a cosy dressing gown that's much more attractive and presentable than the one I've been using for the last few years - this does the job very nicely. The slightly incongruous lining fabric bothers me less the more I wear it, it's SUPER comfortable, and the longer length makes it a bit more sophisticated than it would otherwise be. I'm not going to put it on to greet guests or anything, but I wouldn't be embarrassed to answer the door in it. I'm calling that a win. 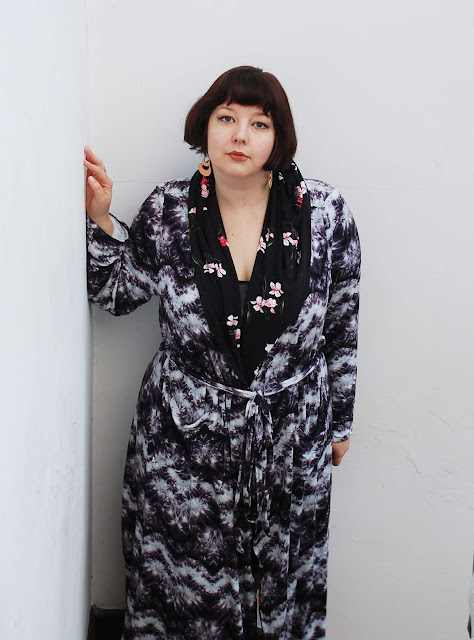 Up next: trousers! I'm genuinely concerned I'm going to wear thigh-holes in my red ones if I don't introduce a bit of variety 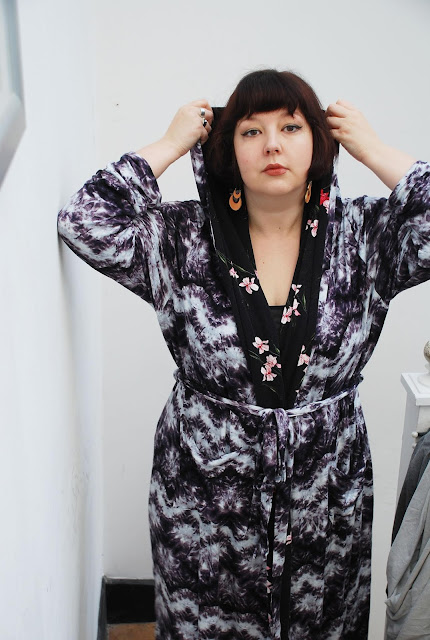 (I don't generally wear giant orange chandelier earrings with my dressing gown, they're just the earrings I put on for the day, but I have to say I don't hate it. For some reason the idea of wearing a tiny bit of a colour that doesn't go at all with the rest of the outfit appeals to me tremendously. Great, now I'm going to need loungewear earrings.)
Posted by Jen at 10:00