Check me out, getting on with my plan. 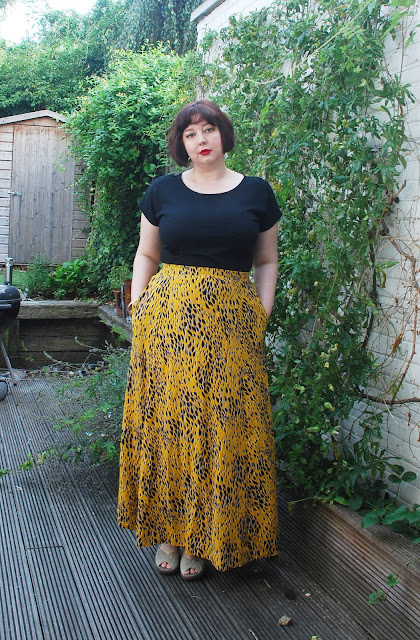 I knew this skirt was going to be one of the first projects I made, mostly because I already had the fabric and pattern in mind and thus wouldn't have to do any more thinking, but also partly because I actively need it. This is proving to be a very stupid September that is neither summer nor autumn, and I've been sorely lacking transition pieces. Also I've been trying to get maxi skirts into my wardrobe for years and never really succeeded, so it was long past time to try again. 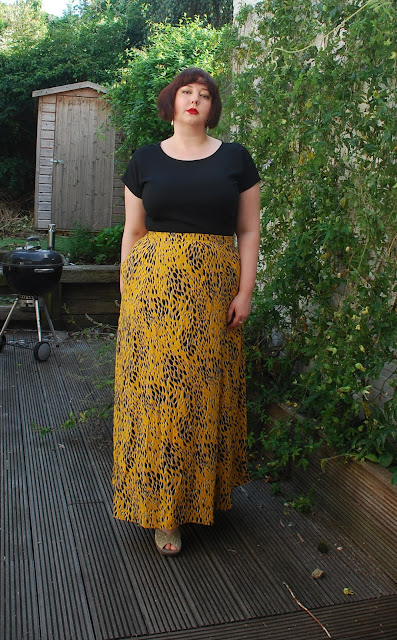 (I am once again asking you to please excuse the wildly inconsistent lighting in my photos.)

I made the Deer&Doe Fumeterre skirt three times last year, and you've seen two of them. For these two I made the pattern up as it was, and it's turned out to be... not really what I want out of my skirts. I love the shape of it, but I've not been keen at all on the front fly or elasticated back, both of which seem to actively work against the way my body moves. I then made a third. I was still doing the Minerva thing at the time and this was a project for them, but it looks like this: 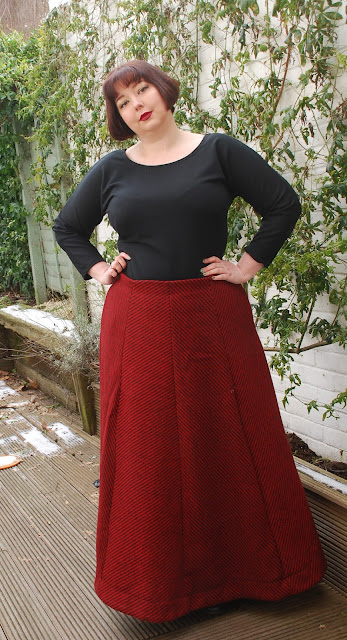 For this one I cut the fly extension pieces off the pattern and turned it into a zipped back with a faced waistline. I normally can't stand facings, but I couldn't work out how to cut a waistband so that the diagonal stripes looked aesthetically pleasing. I also ditched the patch pockets, which I've found to be not terribly useful, and replaced them with the S8380 pockets I keep banging on about. I cut one pocket piece out of the wool and one out of lining fabric, which works very nicely. This is unquestionably the version I've got the most wear out of, but it's limited by two things: one, the fabric is a fairly hefty wool and so only nice to wear when it's very cold, and two, I was incredibly stressed at the time and didn't think through my alterations. I didn't compensate for there not being elastic in the back and consequently it's a little too big. Not unwearably so, but noticeable. I wanted another version, without these problems. 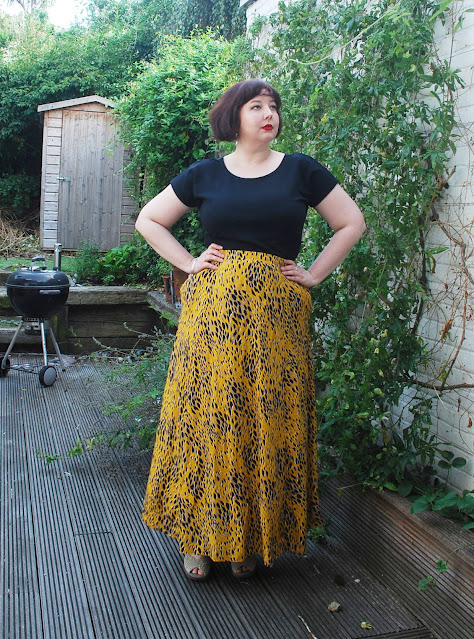 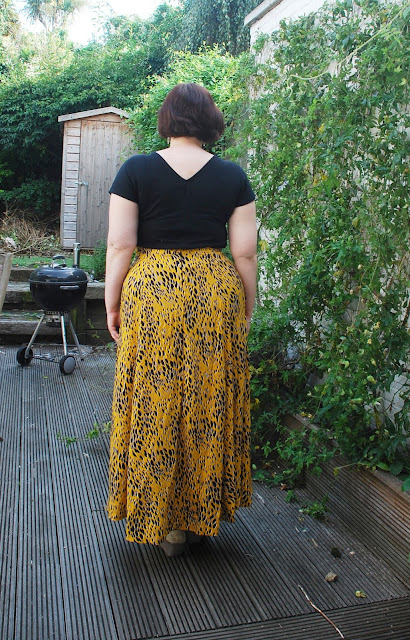 For Fumeterre Version 4 (which, by the way, I am delighted with and will be making multiple times more) I kept the back zip and change of pockets from version three, but reinstated the waistband. I could more or less use the original pattern pieces, with the back waistband piece now used as the front. I shaved off a couple of centimetres from the back seam and the now back waistband pieces to compensate for the removal of the elastic and it fits beautifully. I put a press stud closure in the back waistband. All four versions have the hem facing, which I still love. 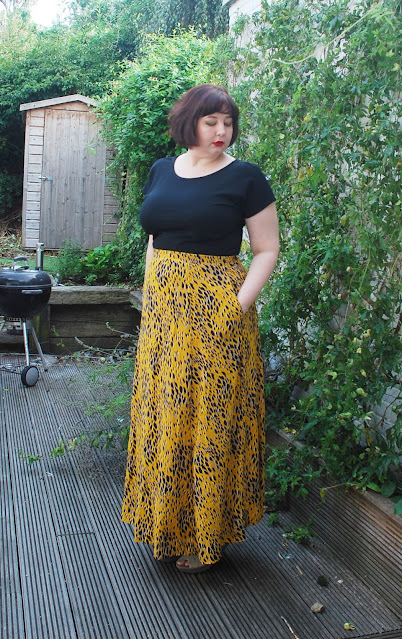 I ended up not putting a lining in this one (still a little gun shy from version two, where the lining arguably fucked it up) and I have yet to determine whether I'll regret it. I was hoping to have done some test runs by now, but instead I have been isolating because Patrick has raging Covid. There was a "reconnection event" at his company last Thursday that turned out to be extremely poorly ventilated and someone showed up with the rona, so now half the office is out sick. He's been really ill with it all week and it's horrible. He's never had a virus worse than this in his life. Miraculously I seem to have not caught it, despite living in a very small house with him and having an immune system that's basically one old man with a blunt stick. I do have an intermittent cough, but the tests aren't showing anything, so a round of applause to AstraZeneca, I guess. He's still not well and won't be going anywhere for a while, but technically his isolation period ends tomorrow so I can leave the house again.

All of which is to say, I don't know how the skirt works with tights and anti-chafe shorts yet. If it turns out to be unworkable I might try to make a skirt slip. It's not something I've really considered before but if I'm going to make several other maxi skirts anyway I should get a decent amount of use out of it. 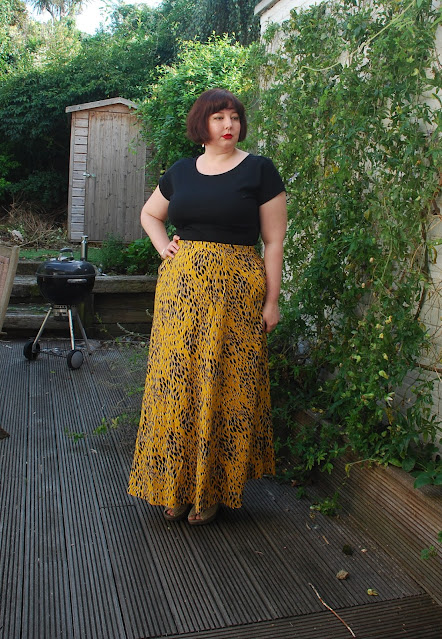 This was a pretty simple project, but for some reason it made me feel really accomplished. I'm really pleased with the modifications, the fit, and the finishing. I'm especially pleased with the way the waistband turned out; it's something I often have trouble with, but this one lined up nicely and pressed into placed with minimal faffing. I think this skirt is going to serve me really well as a transitional piece, and I got excited enough after finishing it to cut out another version immediately thereafter. 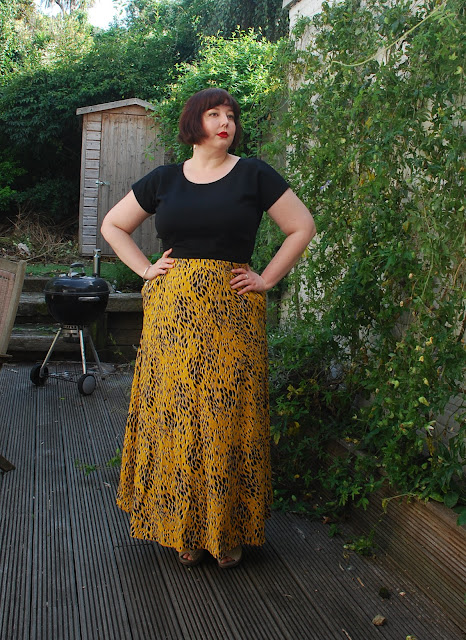 I've had a fair amount of time for cutting and sewing this past week since Patrick hasn't been using the workspace we share. I finished the pyjamas but I don't like them - I will probably wear them around the house anyway but there's something about the fabric that's kind of uniquely unflattering when it's on my body and I couldn't get any decent photos. They will definitely not be the "nice pyjamas that I wear to stay at someone else's house" that I was hoping for. I have a couple of other things at the "almost finished" stage and next week you'll see whichever one I finished first. Assuming, of course, that my cabin-fevered ass doesn't leave the house on Tuesday morning and spend a full week running around fields in wider and wider circles, shouting at the air. I'm not promising anything.
Posted by Jen at 10:00