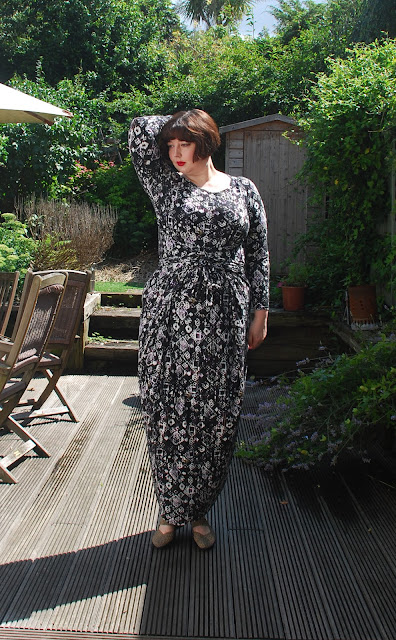 Yet more Kielo dresses! What can I say, they work for me. I'd always intended to make more this year; I reluctantly put my first two into fabric recycling and I wanted to recreate the exact same things in better quality fabric, but those have been pushed back because a) that better quality fabric was nowhere to be found and b) there were maybe seventeen minutes all summer where I would have considered wearing a sleeveless dress. So I turned to some slightly more versatile versions. 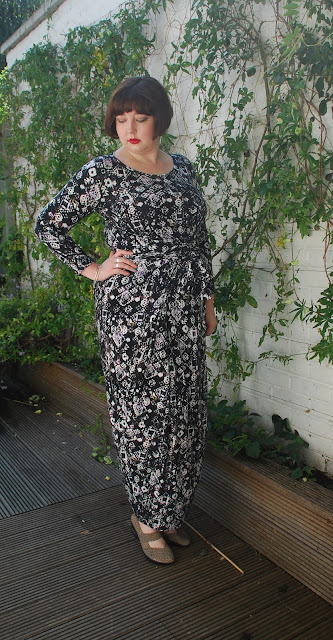 Standard Kielo is standard: free sleeve add-on from the Named blog, fabric from Walthamstow, scooped-out neckline because I wanted a little less of the print near my face. The only thing I did differently from usual was to not put the back darts in, and then wondered why on earth I'd spent so many years putting slim contour darts in jersey. It makes not one whit of difference and I'll never go back. 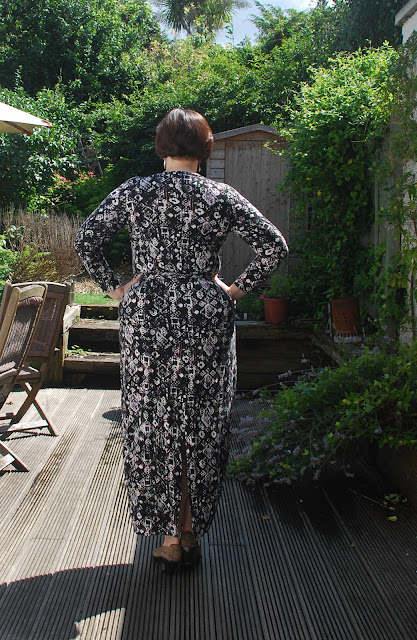 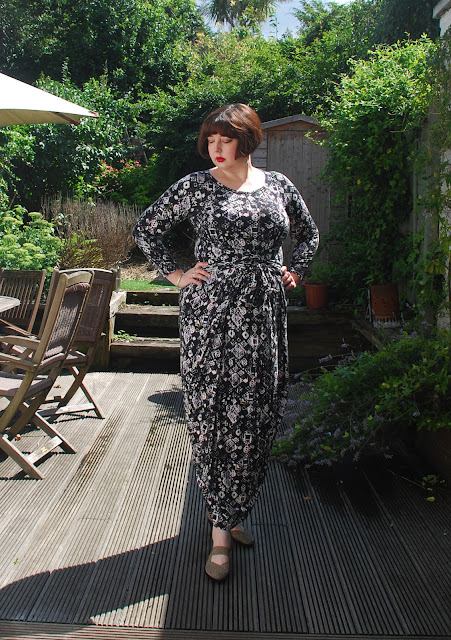 This has been a surprisingly useful dinner dress; it's both dressed up and not at the same time, which I like. It's been far too muggy to try it with tights but hopefully that will work out too. I have zero idea how I'll pair that with shoes, mind you. Patrick and I both went trainers-only at the beginning of the first lockdown because the only thing we were doing was going to nine million house viewings on foot, and then we sort of forgot to go back again and now my feet react with indignance and fury any time I try to put them into proper shoes. 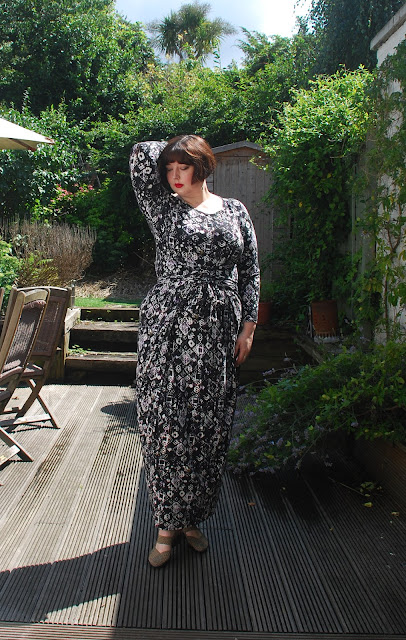 (I took these photos on one of the very few sunny days we had and of course it was far too sunny and all posing had to be based around averting my eyes. This will not be a problem for the second set of photos.)

The second version I made was an answer to this summer specifically. Too warm and muggy to be wearing clothes intended for colder months, but also too grey and unseasonable to be comfortable in my usual summer fare. Bright dresses and jumpsuits have just felt like a lie. 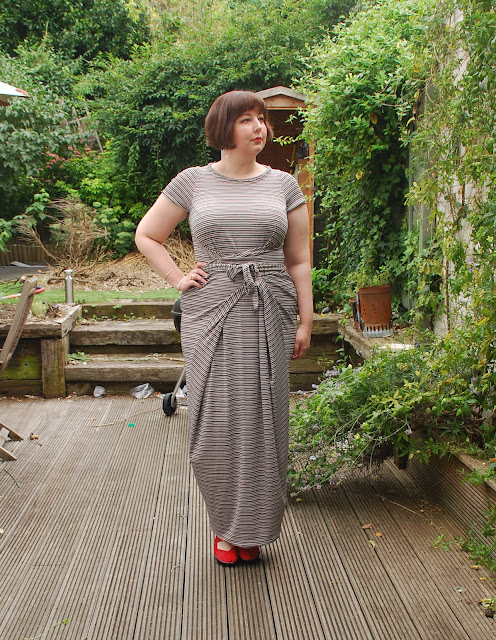 (Yeah, this is what it really looks like out here.)
This fabric is from Fabric Land and is a very narrow black, grey and pale pink stripe. Design-wise it's absolutely perfect for a not-summer maxi, but the actual substrate is kind of weird. The only way I can find to describe it is that it seems to forget that it's stretchy. The whole bodice likes to shift upwards and push the neckline away from my body, and I have to keep rearranging myself. The fabric especially does not like being a neckband and if I ever come across a fabric that won't look like ass with this dress, I really think I'll cut it off and redo it. I don't know how often people who read this blog are influenced to buy or not buy fabric from what I write, but just in case: do not recommend. 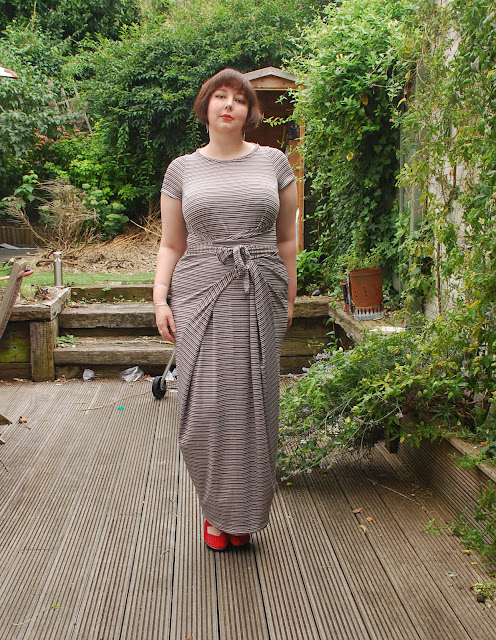 Even with that inconvenience, the dress is just the perfect thing and I've been wearing it all the time, usually with trainers and a denim jacket. This will keep me going through spring and autumn and I'm definitely going to make another one with a similar vibe (though I probably won't make it the subject of a post). Finding the right fabric is going to be a challenge for me as I'm not often drawn to the everyday prints above the eyecatching ones or the bright solids, but the maxi dress is my spiritual home and I'd really like to spend a larger proportion of the year wearing them.
Me: [decides to take a short break from writing this post to look for suitable fabric]
Also me: [finds bright-ass yellow tiger print jersey instead and wonders if the definition of "everyday print" can be stretched that far] 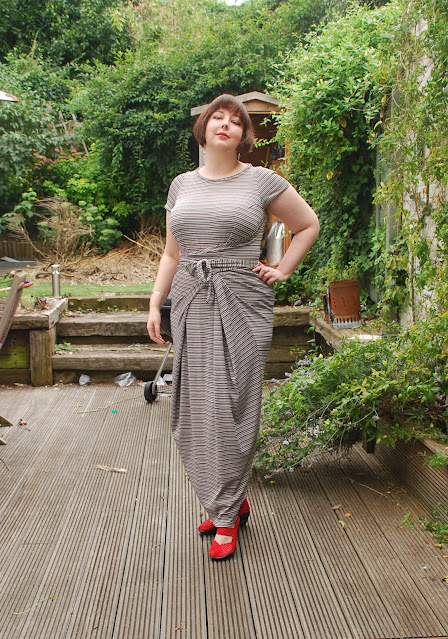 I don't have much more to say about this pattern or either dress I made from it, so instead I'll share with you a small triumph from my month so far: after literal years of writer's block that hasn't been helped by any of the methods I've tried to get through it, I have managed to write a small amount of fiction every day of September so far. It doesn't sound huge when it's put like that, but it is. A plot hasn't really emerged yet but I do have the beginnings of a set of characters that feel real to me and have relationships that I understand, which has always been the best point for me to start from. I'm really looking forward to seeing what I have at the end of the month and I'm genuinely impressed that I managed to make myself do the thing with absolutely zero outside impetus to do so. 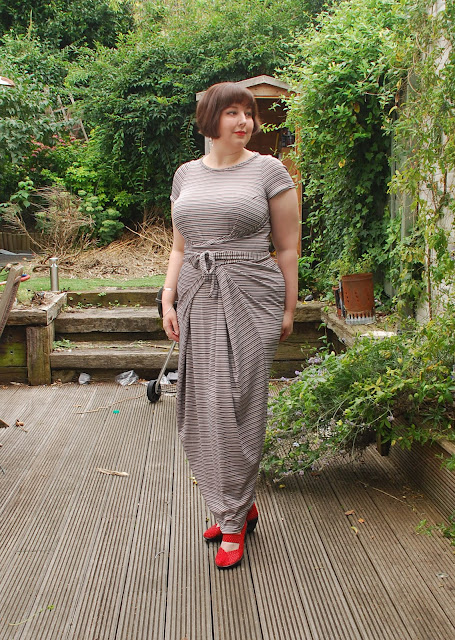 I'm not sure what will be up next. I have several things completed and waiting to be photographed, as well as the first few things from my autumn plan in progress, so I'm a bit spoilt for choice. We'll see which one proves easiest to write about, I think!
Posted by Jen at 10:00