Many months later, I haven't forgotten about this! It's taken a while because, frankly, it's been a tip since we moved in. We made everywhere else look nice and then had a load of boxes and other stuff left undealt with, so it all ended up in here until I randomly hyperfocused and cleared it all up at the beginning of August.
We haven't done a huge amount to it, honestly. Patrick and I had very little furniture when we moved in and all our money went on things like a decent bed and sofas and dining set, so we've really not been able to afford any new kit for either of our halves of the room. (Patrick bought the cheapest desk that Argos had to offer for his half, on the understanding that when money was less tight he'd upgrade it, and it is truly wretched and he complains about it every time he looks at it. Do not buy the cheapest Argos desk, the ball bearings will somehow fall out of the drawer runners and you will be finding them FOREVER even though there weren't many in there to begin with.) And of course, we don't have any intention of redecorating and getting rid of the flamingos. But I have set everything up as I think I'll be wanting it, and here are a couple of pictures: 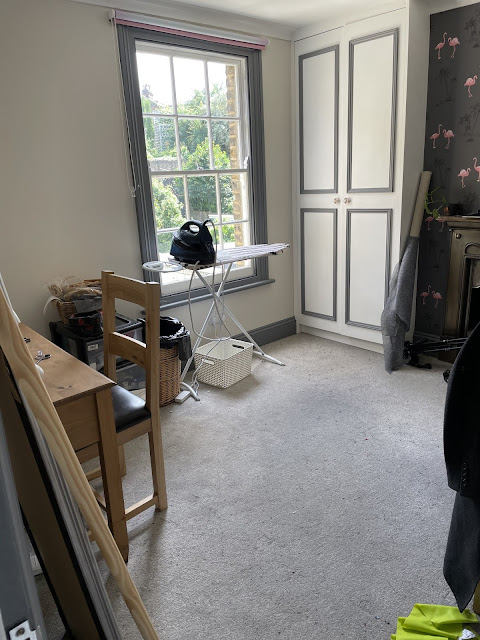 As it stands: iron and ironing board permanently set up by the window. I haven't yet bought a new ironing board - I assumed I would be getting the exact same one my mum has, as I mentioned in the first post, but not only does it not have a brand name or any other identifying marks on it, it's also apparently deleted itself from her purchase history. I'm still salty about it. My interim scraps bin (otherwise known as Patrick's old disintegrating laundry basket) is underneath it, and that will be replaced asap because it is literally falling to sharp spiky wicker pieces and I've injured myself multiple times already. Next to that are my notions drawers and a small basket for escaped pattern pieces, and my sewing desk itself is against the wall next to the door: 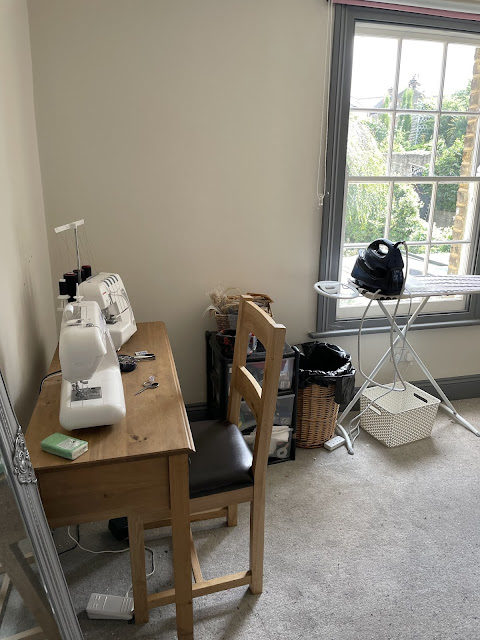 This desk is also in line to be replaced when we can afford it - it's increasingly rickety and because of the drawer on the right side, doesn't really lend itself to sewing on two machines. It's not unworkable, so that will probably be one of the last things that happens. Ideally I would like a corner desk, so that I can switch between machines easily but also have drawer space, then I can repurpose the plastic ones. I'm really keen to get some art up in this corner so I'm not looking at a blank wall. I bought a print that I thought really encapsulated everything I wanted, but when it arrived the actual print wasn't very good (it was never meant to be that large and it looked wrong blown up) and now of course my brain has decided that all the art should be stuff I've made, so I have to either pick or take the right photo, and then possibly get into cross-stitch so there are some smaller things to hang up. Patrick has no such ideas for his half and has declared his intention to just have a Kraftwerk poster and a Carly Rae Jepsen poster. 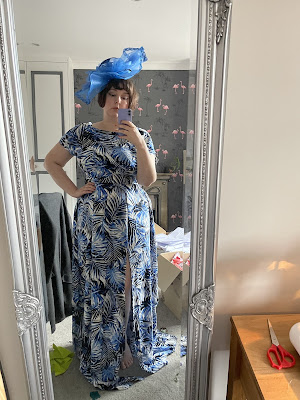 The one thing I have bought is a full-length mirror, which was very difficult to photograph so this will have to do (it's a WIP shot of last week's dress I took a little while ago, so you can still see evidence of the Box Dump. The hat is a whole other story). I find it basically impossible to sew without a proper mirror and the house otherwise doesn't have one, so we prioritised this (after, y'know, the bed and the fridge and stuff). It's next to the desk, which is the best place I can find to put it for now.

I've also acquired some storage boxes for my patterns and I've put them away categorised by frequency of use, as I planned. I thought about taking photos of the inside of my cupboard, but you wouldn't like it. Workable storage for me isn't very pretty and I'm certain it would upset people. If you are prone to your eye twitching when you see things that are a bit off, I assure you your eye would twitch. But it works, all my patterns are actually put away rather than randomly stuffed out of sight, I know where to find everything, and it's generally much easier to sew now.

Updated list of possible changes and acquisitions, now in some sort of priority order:

- some art for the walls. I know this is an odd choice for highest priority, but I have everything that's actively and immediately necessary. What I think will make the biggest difference to my creativity and motivation to be in the sewing room is being able to see colour and joy rather than just blank cream walls when I'm sat at the desk. As I said above, I'm currently going through my past photography to see if I have anything that would suit.

- a magnetic whiteboard to keep track of projects currently on the go, ideas I've had, and any supplies I'm running low on. That will probably go next to the window.

- a replacement scraps bin for the wicker liability I'm currently using. (I made a small fabric basket for bits of thread and overlocker offcuts, which is on the drawers in the pictures above but is also dark grey so not especially visible.)

- a smart speaker. This is Patrick's insistence - I like to listen to music while I sew and it doesn't bother me to use my phone for that, but the inferior sound quality stresses him out whenever he comes into the room (music nerds gonna music nerd). We have Sonos speakers downstairs - we're not into digital assistant or voice-activated ones - and we'd get the same again for this room.

- a new ironing board when I can find one that meets my particular specifications.

- a small table for whatever my current work-in-progress is, so that it doesn't live on the ironing board and set a dangerous precedent.

- corner desk and office chair, which are some way off but I'm looking forward to them.

There are other, bigger things I also want, but they won't fit in the room while we're sharing it and I don't want to start planning for them until I know if and when we're getting Patrick's garden office. Basically I want a large fold-out cutting table and a dress form in my measurements, the latter especially. It would make a huge difference to my amateurish attempts to learn to fit things if I could experiment on a replica me, and I would definitely hate hemming less if I could hang the garment on something my shape while I pinned it. Also there's a part of me that's convinced the acquisition of a Jen-shaped dress form would open up a whole new world of creativity and I'd be making all sorts of cool shit. This will almost certainly not happen, but I have been enjoying watching YouTube videos of garment draping and pretending I could totally do that too if only I had the equipment.

My plan is to do another post in this series in the winter, when all the things are on the walls, possibly one when the whole list is done if the room looks appreciably different, and if/when I take over the whole room I'll do another couple of posts about plans and acquisitions for the extra space. I don't want to beat this succession of posts into the ground but I do think it'll be useful - mostly for me, but hopefully also others, especially those with neurodivergence to accommodate - to have a record of what I thought I needed vs what it turns out I actually need once I've been working in this space for a while.

Up next will either be my autumn sewing plan or a a pair of trousers, depending on whether or not I'm able to make it to Walthamstow this week. I think it's going to be a bit of a stressful one, and it's 50/50 whether my stress manifests as extravagant fabric purchases or hiding inside with a pint of ice cream. We shall see!