an Anna dress and some feelings

I'll be frank here: this dress makes me a bit sad. 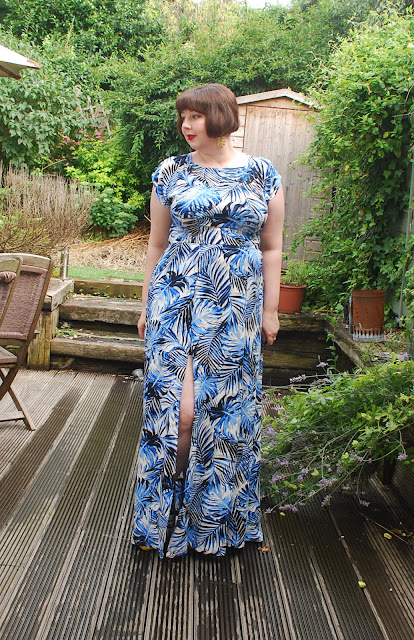 This is a By Hand London Anna dress that I made to wear as a bridesmaid's dress to the wedding of one of my oldest friends. On the week of the wedding, I finished the dress on the Tuesday... and the following day got pinged by bloody Test and Trace and had to self-isolate until the Friday after the wedding. I had to FaceTime into the wedding, which was half an hour down the road from me, feeling absolutely physically fine (PCR tests confirmed no Covid for me) and it made me so, so sad. I took these photos on the day of her wedding in the hope of being awkwardly photoshopped into the actual wedding photos later on, so fair warning they are mostly very stupid. And now I have this dress, and I really don't know if I'll be able to wear it. It's not that I don't like it, it's just that it's got feelings stuck to it now. 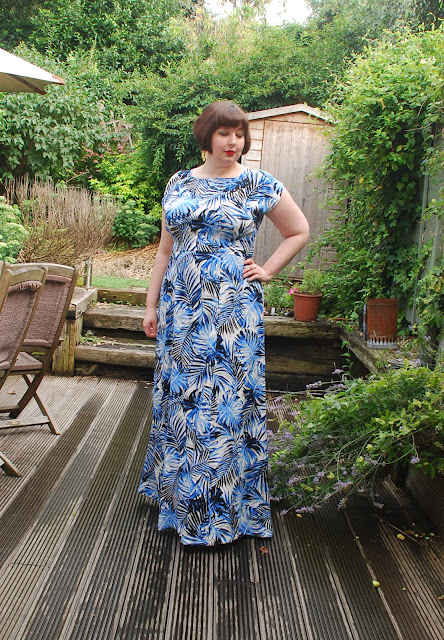 The fabric is a viscose I ordered from The Textile Centre (she'd asked us to wear blue and suddenly I could not find blue fabric anywhere) and it worked really well for the pattern. Not super thin, plenty of drape, none of that weird plastic-type feel you can sometimes get with cheap stuff labelled viscose. I used my original Anna pattern with FBA rather than the newer one with the built-in D cup because the shoulders of the largest size were too big for me. I went up 1.5 sizes in the waist on the assumption I'd be eating a big dinner and drinking a lot, and put some ties in at the side seams so that it would be somewhat adjustable depending on what portion of the day we were in. If I decide I can get over my feelings and wear this again, I'll probably take it in a bit because it's not massively flattering when not cinched. The neckline is finished with a bias facing because we all know I hate the facing that comes with this pattern. 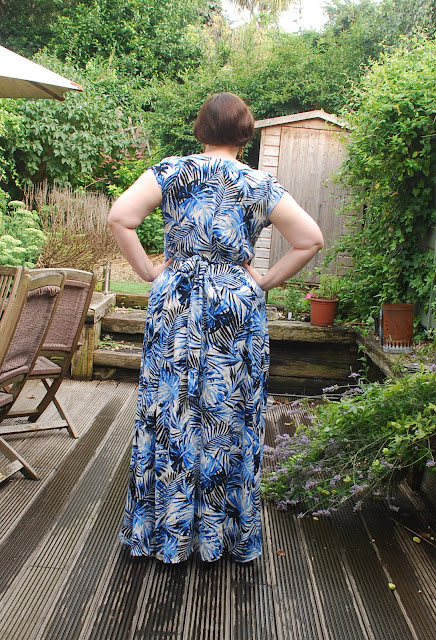 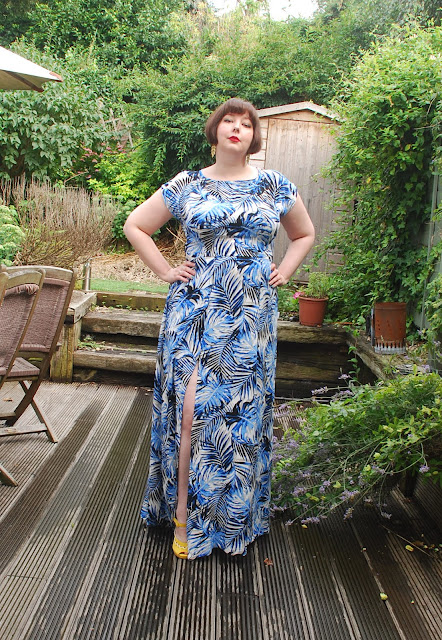 Honestly, that's about as much as I have to say about the dress itself. This is the kind of thing that under normal circumstances I either would not bother blogging or shove in at the bottom of a different post as a bonus. But I have not made much recently, and I have a bunch of photos of me being a dork and pretending I'm at a wedding, so I'm going to put some of them here and chat for a bit instead.

(I would not have worn these yellow suede heels to the actual wedding, despite them being the shoes I most often wear to weddings, because it was chucking it down for most of the day and they would not have survived. You'd think you'd be fairly free from that sort of thing booking your wedding for early August, but NOPE.) 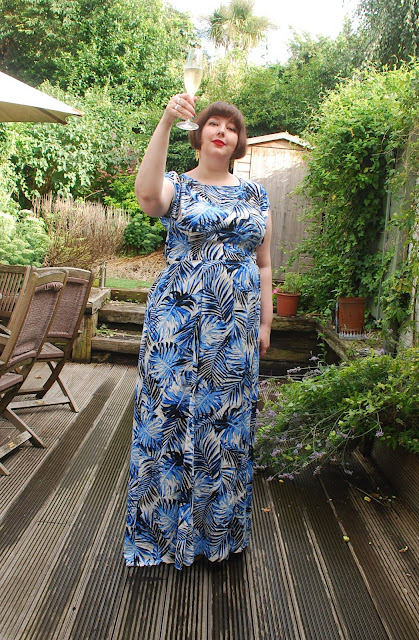 I also FaceTimed into the toasts. We tend to keep half-bottles of fizz for when we want to celebrate something but aren't up for ploughing our way through a full bottle, which was especially fortunate that day because Patrick, though he was also confirmed Covid-negative, was sick as the proverbial and absolutely not up for joining me in a glass of mediocre Cremant. I also had a tiny wedding disco, all by myself. Spotify wedding party playlists are atrocious, by the way. I know the party isn't the first dance and it's not particularly important that lyrics be wedding-appropriate and such, but who is playing Pony by Ginuwine at their wedding? And is there footage of it? 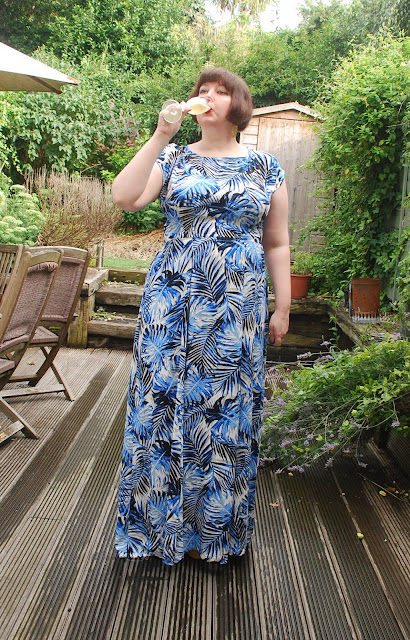 [general representation of me at a wedding. I hope they just photoshop this into the background of every single crowd shot] 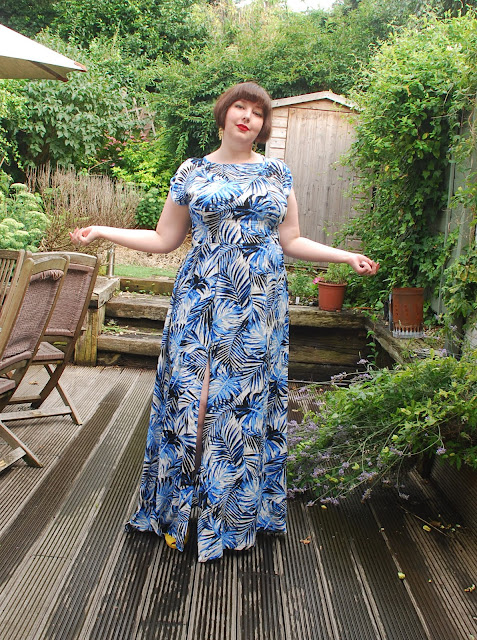 All of which is to say, it's been a weird time inside of a weird time, ten days of not leaving the house was NOT good for me and the fate of this dress remains uncertain. For now I've put it away, and maybe in a month or two I'll have a look at it again. If summer suddenly happens in September like it did a few years ago, I might even try to wear it. I hope I can make peace with it, because I do think it's very pretty. We shall see. 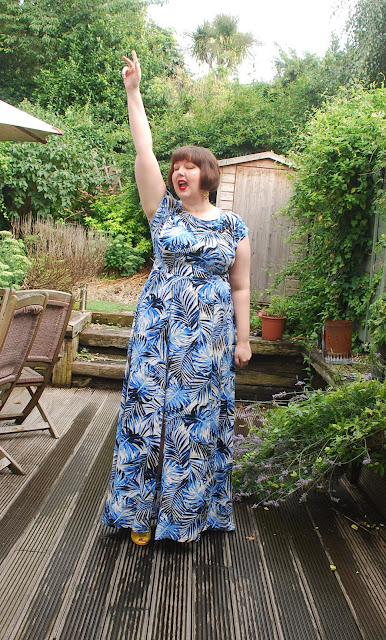 [also general representation of me at a wedding]
I'm extremely looking forward to my family coming to visit this weekend (and also terrified that it will be prevented by threatened or actual Covid). We've booked Sunday lunch for my mum's birthday but otherwise keeping things fairly low-key, staying away from London's biggest crowds and having a good time with the wine cabinet. Before that happens I'm hoping to get some sewing done; I have a bright red Sallie jumpsuit cut out that I'd really like to complete this week. Not that we'll have the weather for it, but I would still like to own that jumpsuit now. 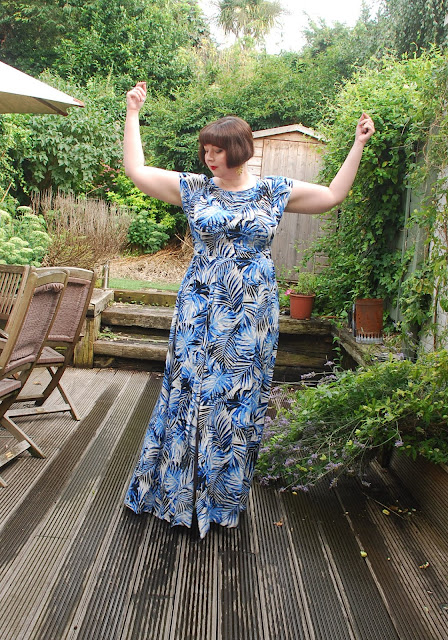 Up next: finally an update on the sewing room! What's done, what's to come, general fantasies about owning a dress form and becoming some kind of draping genius running away with me!
Posted by Jen at 10:00