Hands up who's surprised that the thing I motivated myself to sew was the fancy velvet dress? 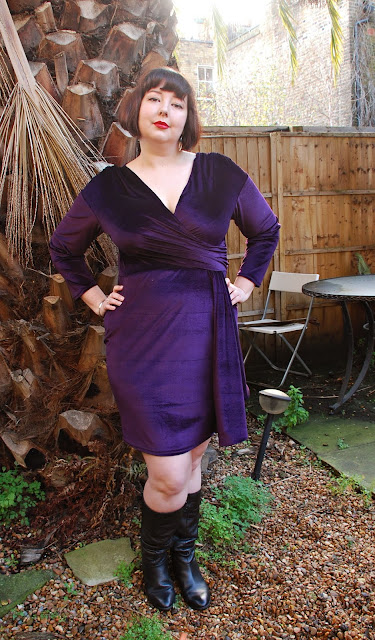 I finished this dress over a week ago, got up the next morning with the full intention of taking photos and making a post... and then got hit with a random vomiting bug that left me in an unphotographable state until two days ago. Merry Christmas to me, indeed.

As I mentioned in my planning post, this pattern was intended to be my first ever velvet dress. The velvet I had at the time was this ridiculous extra-long-pile cheap stuff that shed all over me like an overenthusiastic husky as soon as I touched it and I gave up before I'd even got the first piece fully cut out. I've thought about that velvet dress fairly regularly over the intervening three years (HOW has the past three years somehow also been nineteen decades, ugh), and my current velvet kick seemed like the right time to revisit it. My original velvet was red, but my guy at Walthamstow had this dark purple which I just couldn't say no to. I went for view D, with the long sleeves and straight skirt. 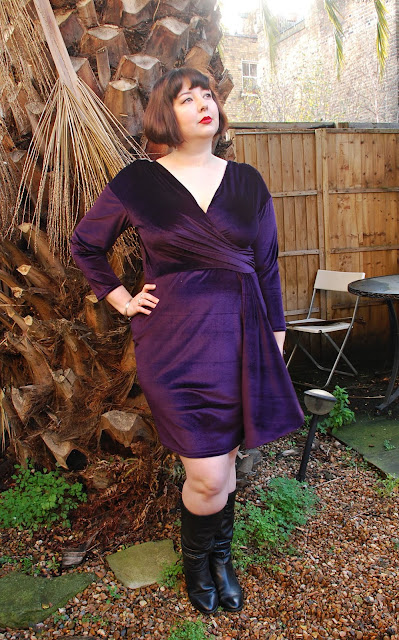 So. First of all, I really like the end result. This dress looks exactly the way I'd imagined it would; the bodice fits nicely, the skirt isn't overly clingy, the drape is cool, the sleeves fit well. It was also exactly the right length straight out of the packet, which is super rare for me. And I always love this colour on me. In terms of the final dress, this was a success. However, I changed many, many things to get here. 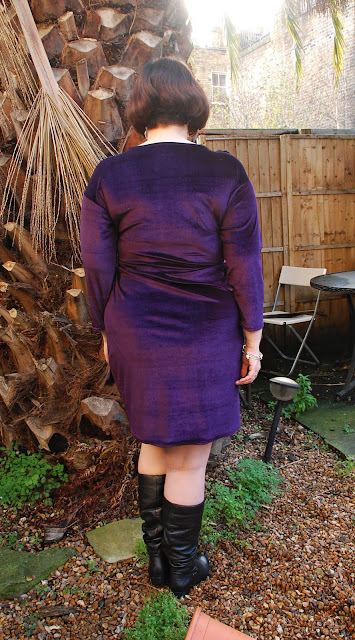 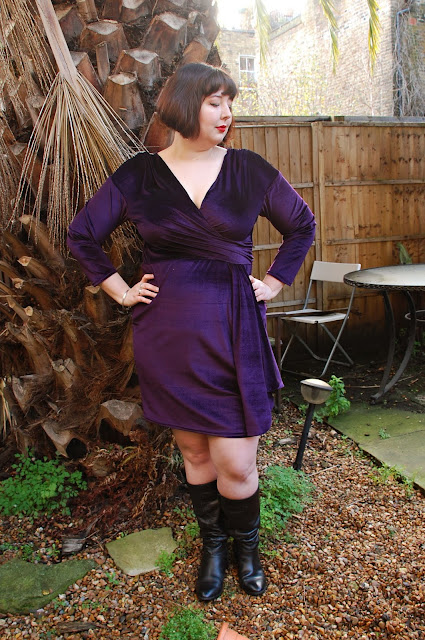 I got this pattern free with a magazine (or more accurately, I got some patterns packaged up together with a magazine I didn't read) and it's not technically my size. That's very rarely a problem I have with McCalls, but this one randomly stopped at size 16. I believe there is a separate plus size envelope, but the magazine wasn't giving that one out and I wasn't going to buy the same pattern again. I managed to get a really good fit by cutting the size 16 bodice and just grading out the hips and upper arms by a size or two. Based on the pieces that were already cut out my original plan was to skip over the hip issue by cutting the full skirt, but I am certain I wouldn't have liked this dress anywhere near as much if I'd done that. 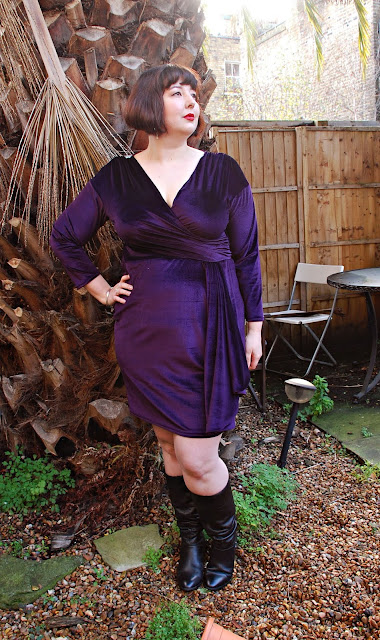 This dress is supposed to have a lined bodice. I didn't do that because the bulk would have been beyond my sewing machine's capabilities. Even without a lining it was a bit of a struggle. The drape on the skirt is two layers sewn together, which are then pleated and folded forward on top of the seam line between the two front skirt pieces, and then sewn to the two layers of the front bodice. It's a giant lump of fabric, and had there been another two lining pieces in there I think my machine would have thrown a stomping tantrum. I used facing pieces instead. (Also, if I'd lined with the velvet as I originally thought I would before reading further down the instructions, this would be the heaviest dress in the entire world.) 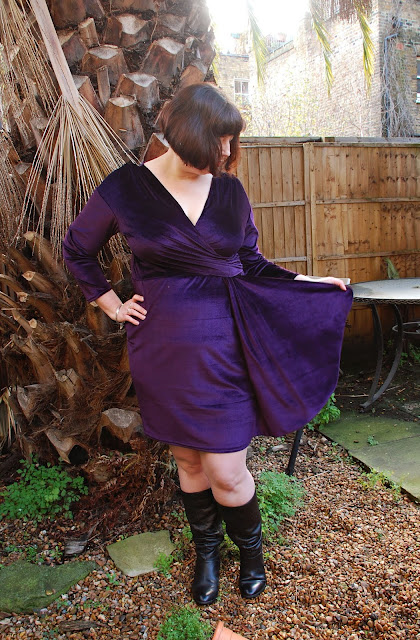 The pattern also calls for shoulder pads and waist elastic, neither of which I used. Maybe an elastic casing wouldn't look weird in a viscose jersey version of this dress but it would sure as hell look weird in a velvet one. It's possible that this dress fits me so well despite being clearly too small by the sizing chart because there's a ton of ease in there intended to be gathered into elastic, and again I would not like this dress nearly as much if that had been the case. Whenever I see a pattern call for shoulder pads, I keep hoping they're going to be the tiny little cloth things I had in a couple of my jumpers back in 2009-ish, which didn't really look like shoulder pads but did correct my very round shoulders a bit. It never is, it's always ridiculous 80s nonsense and I'm not sure why pattern companies are still doing this. I want my tiny shoulder pads, dammit! 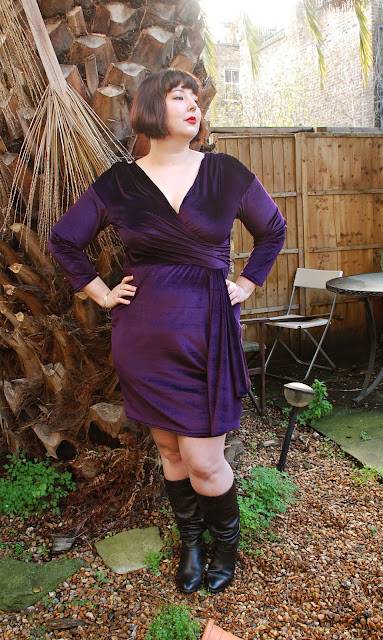 I will probably not wear this for my first Christmas with the in-laws. They are extraordinarily practical people and velvet dresses when you have no intention of leaving the house just aren't the thing. NYE might be its time, though; last year my friend insisted I wear my green velvet Magnolia dress to her low-key house party, and now I've accidentally started a tradition. This will be slightly easier to exist in, at least. 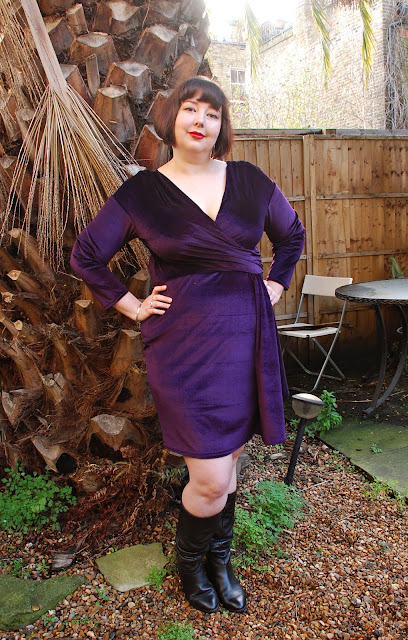 I was hoping I'd like this pattern enough to make it again because there's a maxi length version and I am dying for a non-fancy maxi dress I can wear in the winter, but the chances are extremely slim. I love this version but I feel like getting to it was too much of an accident. It looks like the picture but not very much like the measurements or instructions. For similar reasons I don't feel I can recommend the pattern either; it's a really lovely design but I just don't know what you'd get. You might get something that looks like this or you might get a weird blousy thing with 80s power shoulders.

Next up: A year-end wrap up post or two, followed by my many thoughts on a jacket pattern with many issues. Grumpy Jen incoming!