I made a pair of Esther trousers in April last year, and I thought I probably wouldn't make the pattern again. The shape is too distinctive to merit too many pairs, trying to get the pleats to lie flat was a huge faff, and try as I might I could not find a top to wear them with beyond the one in the blog photos. I tried a bunch of different lengths and shapes and colours and every time I looked like the doorbell had rung unexpectedly when I was chilling on the sofa in my underwear and had to scramble to put the closest things on. Pyjama realness. However, as spring progressed and I found myself severely lacking in trousers, I began to reconsider. 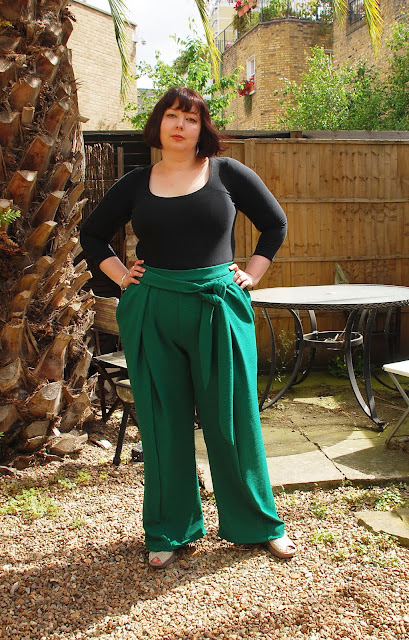 When I decided to make a second pair, I knew I wanted something slightly heavier in weight than last time and also a solid colour, to hopefully minimise the pyjama vibes I kept getting from my first pair. I had every intention of buying a neutral-ish colour for versatility, but it shouldn't have been any surprise to me that I came away with bright emerald green. Once again my camera refuses to accurately record any shade of green but it's much brighter than this in real life. The fabric is some form of crepe and has a little raised cross-hatch texture all over it. It's really nice. 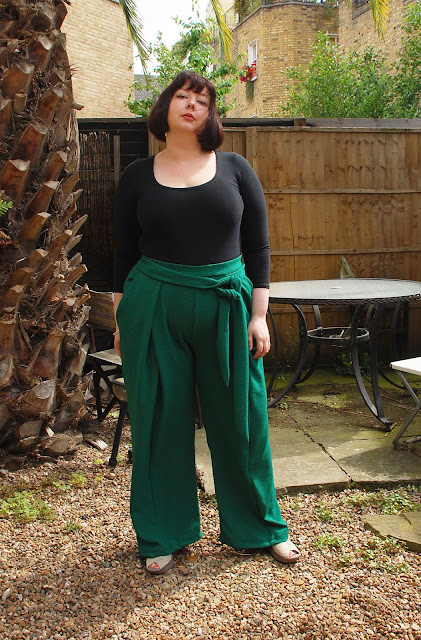 Making these trousers in a heavier fabric was an entirely different experience. I will say that this crepe is probably too heavy; you'd be fine with a lighter crepe but this was definitely a tad too thick. Last time I said I wouldn't use a heavier fabric because of the bulk and volume of fabric around the thighs; I take that back. The reason not to use a heavier fabric is that sewing on the waistband is giant bulky pain in the arse. There are certain points on the waistline where you have the seam for the two front pieces, two large overlapping pleats, the pocket bag, and both sides of the waistband meeting in one place, and when you're trying to secure the waistband you're sewing through almost a dozen layers of fabric. I had every intention of French seaming it, too, which would have made everything worse. 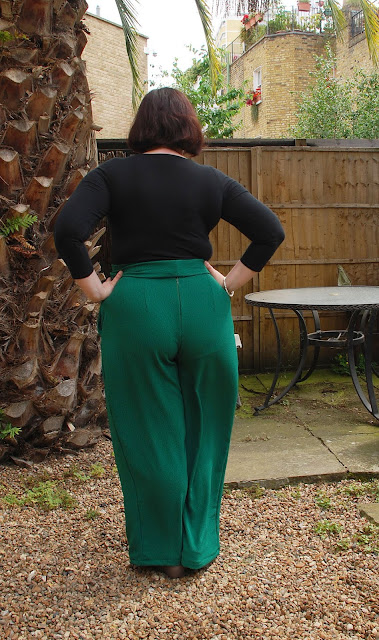 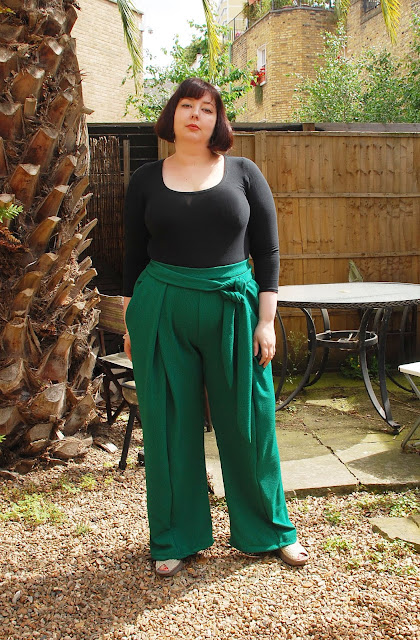 On the plus side, I didn't have any of the same issues with the pleats here. I now think the fabric I used last time was too light, and it actually does need a bit of weight in order to naturally drape and fall nicely. You can see that this fabric is doing exactly what it's supposed to and there's nothing remotely prolapsed about it. Which is good, because it wasn't the easiest to press and it'll take a few more rounds with the iron before the seams lie exactly the way they should. I probably won't go back in for the pleats, though, I think they look fine. 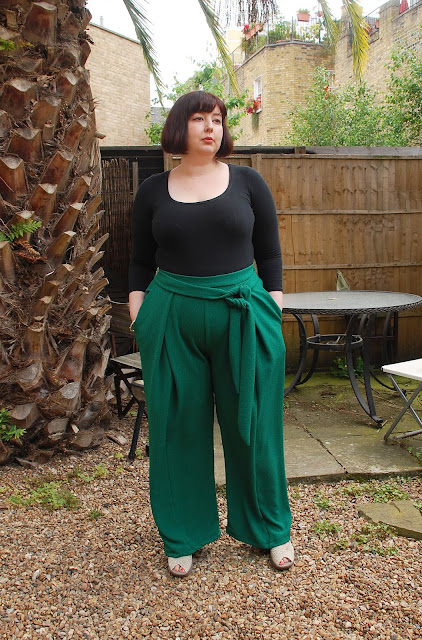 Another thing to note that I don't think I mentioned last time is that the pockets are ENORMOUS. Almost my entire forearm can fit in there. I don't tend to carry a ton of stuff in my pockets but I really appreciate that they're there. Though I did once freak out on the Tube last week because I thought I'd lost my phone, having only reached in as far as I assumed a pocket would go instead of to the actual bottom of the pocket. Your stuff will be safe, is what I'm saying, and I don't think I really felt the benefit of them in the last pair because the fabric was so light and not really able to support the weight of much stuff. 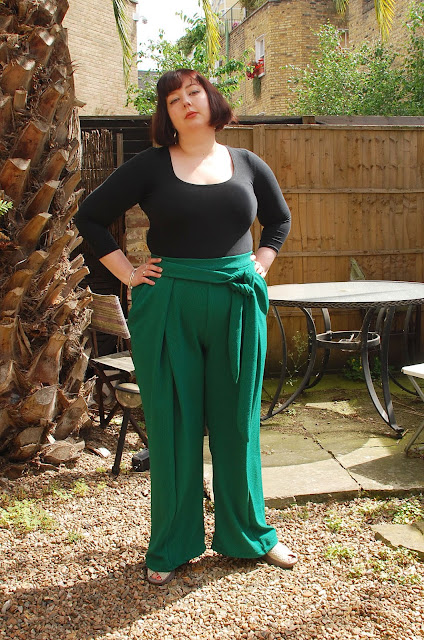 The pattern comes with an optional sash, which I decided I did want to make this time. I prefer the look of these with the sash but want the option to wear them without, which leads to a small drawback: the sash doesn't attach to the trousers in any way, and the style of both really doesn't lend itself to belt loops. It's not a huge deal, and wearing the sash loosely double-knotted like this seems to keep it from falling off, but it does add a layer of minor annoyance to going to the loo. Especially in public. I have now found myself awkwardly wearing the sash around my neck in pub toilets multiple times. 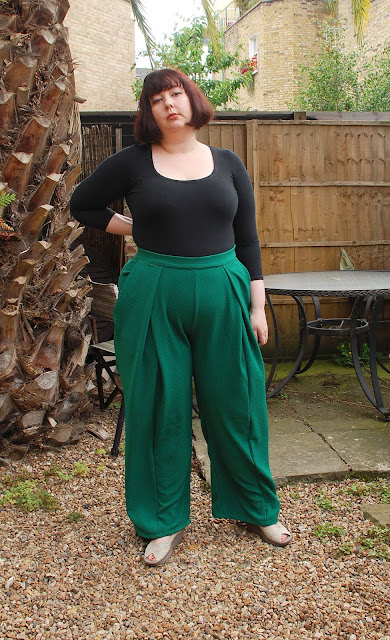 Please excuse my face here, it turns out I only took one solitary no-sash picture. I'm not sure why that was.

Despite the bright green, these will definitely be much more versatile and wearable than my first pair. I've tried them on with a few different things and they do not look like pyjamas with any of them. It does have to be said that the emerald green limits my colour pairings somewhat, so I'm thinking of making a couple of tops to go with them and also be useful elsewhere; depending on availability of appropriate fabric I'm planning for grey, blush and possibly some shade of blue or yellow if I can find the right one. I LOVE yellow and green but I'm not sure I love yellow tops with green trousers, so we'll see. 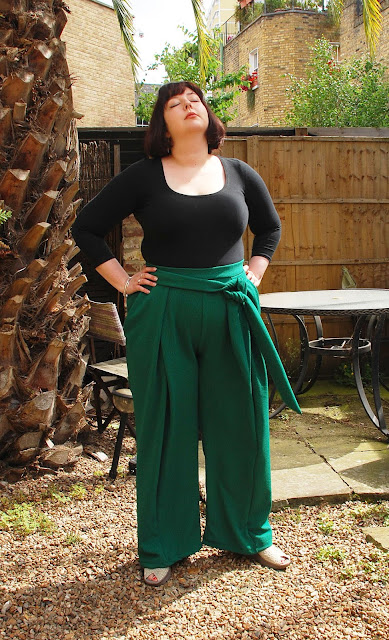 Overall I'm much more positive about this pattern than I was last time, and I think I probably would make another pair if I could find the right weight and colour of fabric. I've got a much better understanding of what works and what I'd be looking for now, so finding the colour would probably be a much bigger pain than finding the weight. I don't want bright and I don't want true neutral, which basically takes it right out of my wheelhouse. What colour would you make these trousers in? 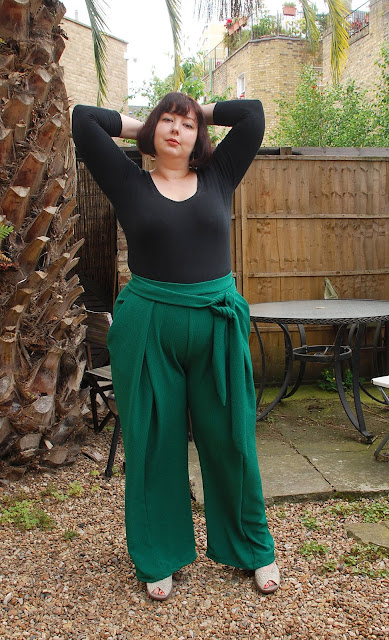 Next up: leggings! It's head-to-toe galaxy time!

Fabric: Emerald green textured crepe from Walthamstow
Cost: £9
Pattern details: Pleat-front trousers in two lengths, with waistband, back zip and button, and optional sash
Size: 16
Alterations: None to the pattern itself; substituted back button for press stud
Would make again/would recommend: Yes/Yes
Posted by Jen at 11:00