If it weren't for the fact that I have been utterly deathsick for the past week and a half and haven't been able to get anything else done, I probably wouldn't be posting this skirt. I can't work out what I think of it, and I think I could do with making another version to work some of the kinks out. But this is what I have, so here we go: 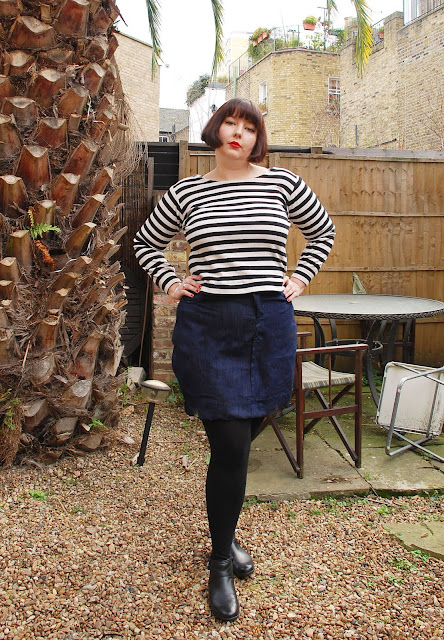 The simple denim skirt has been the absolute bane of my sewing life. I have made five different ones to date, none of which prior to this one have made it to the blog. I made a Hollyburn that somehow grew three sizes within the first week of my making it, a Vanessa Pouzet Wonder skirt (without the swags) that sat weirdly, a combination of that and an old RTW skirt which didn't work at all, a Simplicity one that did deeply disturbing thing to my backside, and now this, the Tilly and the Buttons Ness skirt. 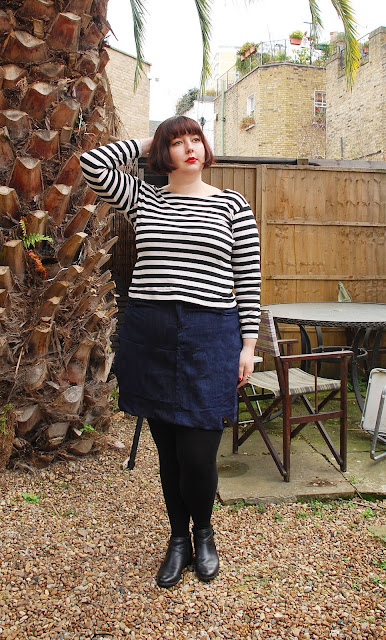 This one is certainly my best attempt yet, as you can tell from the fact that you're actually seeing it. But it's still not quite right, and I'm trying to work out why that is. I think it's maybe a bit too big - I made the hips two sizes larger than the waist as usual, but given that it's designed for to have a bit of stretch it looks a little bit weird. I also don't think it's designed to sit as high as I'm wearing it, and I might be better off making a straight version of the size in the middle of the two I tried (which I think is a 6? I found their invented number sizing to be a bit confusing). 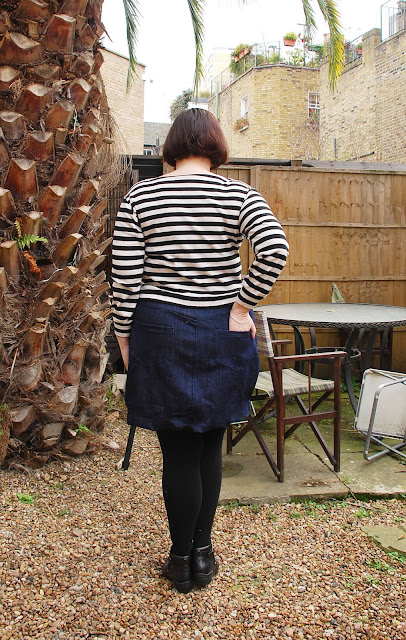 I had to learn a lot of new tricks to make this skirt, including installing a jeans button and making my first ever buttonhole. It turns out that, once you've realised you're using the 4-step buttonhole foot from your old machine and replaced it with the proper foot, buttonholes are actually pretty easy. You just put the fabric in place and the machine does it all for you. I even made a fancy keyhole shape to accommodate the jeans button.

Installing the jeans button was kind of a pain at first, because the tack doesn't sit comfortably in the hole until it's been hammered a little way, and it's really tough to get it started without hammering your fingers. I ended up holding it in place with Blu-Tack until it was decently wedged in, and I have to say it looks rather nice. 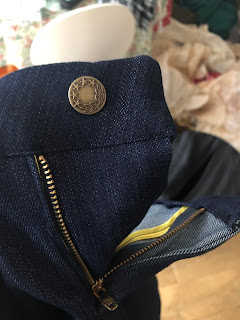 (It's not centred, I know, but I ended up with one end of my waistband being slightly bigger than the other and this was the only way to get them to line up at the top.)

I flat-felled all the seams except the front one, which I mock-felled as the instructions directed. I only did this because I wasn't sure if a proper fell would mess with the fly in some way (of course it doesn't); I'm not generally a fan of mock-felling. The whole point of a flat-fell is that I don't have to deal with finishing raw edges and thus confront my lack of a functioning overlocker. When my mental health is in a stronger place I'll have another go at getting it to work, but for now everything is flat felled and French seamed. (I used bias binding on the front mock fell.) 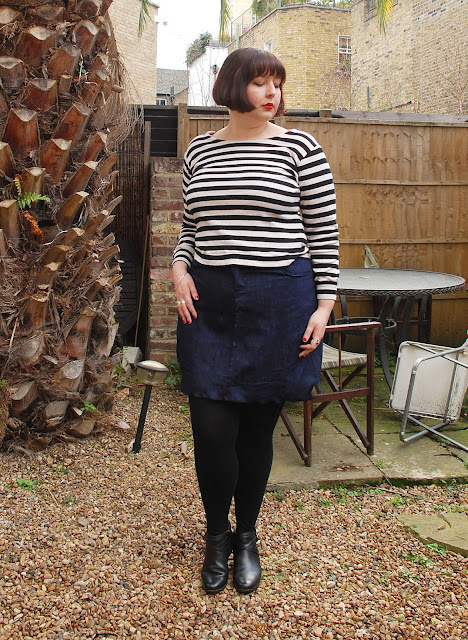 I did not do any contrast topstitching. My topstitching is not good, and while I will have to start remedying that soon I was not keen enough on having a topstitched skirt that I was prepared to spend a month on getting it right. 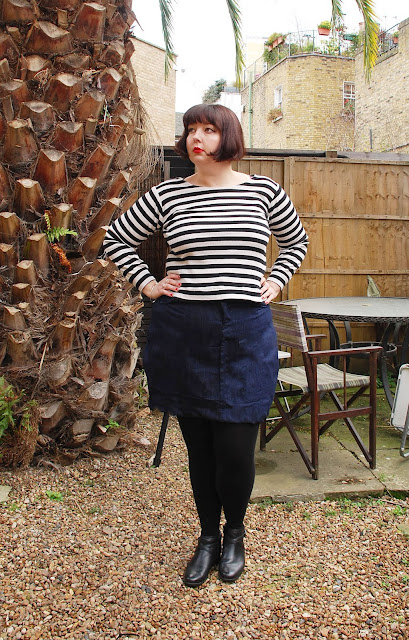 My intention is to acquire another metre of denim and have a second stab at getting this right. In theory this is exactly what I want, but in practice it's not quite there. I think I need to make the back pieces smaller than the front, get the whole thing to sit a tiny bit lower, shorten the hem, use a slightly longer zip, make sure my waistband ends are even and work out how I did that thing with the fly that I shouldn't have done. I think it should be easier the second time, now that I know what I'm doing and not relying entirely on the included instructions (I've heard a lot about the amazing quality of Tilly and the Buttons instructions, but I felt that they used a lot of extra words to say not much more than regular instructions do. Admittedly I didn't use the video links because I wasn't confused enough to pause the thing I was already watching to look at someone putting a zip in). For now we'll call this a toile, and I'll try again in the new year. 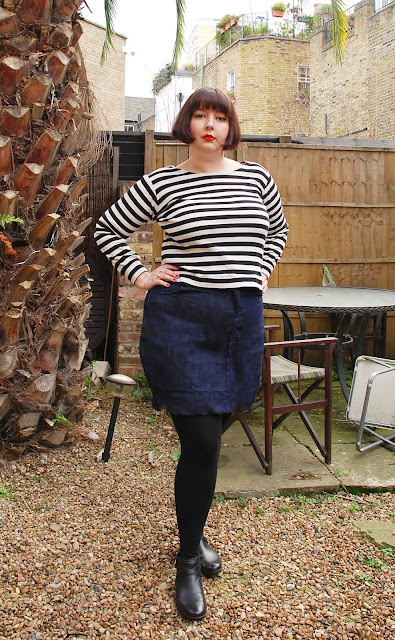 Next up: depends how this week goes, but I hope to have at least a pair of trousers to show you!
Posted by Jen at 10:00