I said in my last post that I'd had a pretty heavy week, and the week following was somehow even worse. I have a massive amount of shit to sort out and I feel incredibly lucky that I happen to be in a place where I'm healthy enough to advocate for myself right now. I don't want to think about what might have happened to Past Jen in this situation. (I'm being vague on purpose, but please be assured that I'm going to be OK, my partner and family are supporting me, nobody else has died since last Friday.) Things are pretty tough, there's a lot of work to do, the news from the US is utterly horrifying, and I just have not had the mental space for sewing. Fortunately I'd already written the rest of this post, so here it is.

This dress was made for the wedding of a relative of mine (I think the technical term is first cousin once removed, but we've always spent a lot of time with them). They are not well off at all and were determined to only invite people who were a genuine presence in their lives regardless of what etiquette would normally dictate about inviting person X and not person Y. I honestly didn't expect to be invited at first and wanted to show that I appreciated the significance of it. When I put the project into my plans, I had no fabric and no real idea of what I was looking for. I don't normally allow myself to do that because it usually leads to never finding anything and not even getting started, but the fact of having an occasion and a deadline, I thought, would add enough pressure to make sure things actually happened. For once, I was correct. 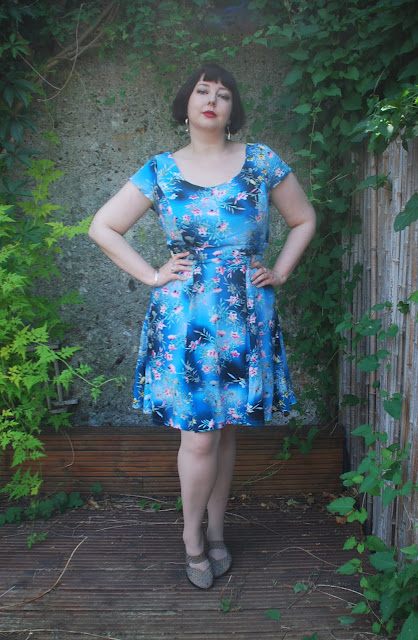 As soon as I saw this fabric in one of the Walthamstow shops I knew it was right. It's not something I would have otherwise bought (this is extremely not my usual style of print) but it has the exact vibe I had in mind for this wedding and is also vibrant enough to still feel somewhat like me. The substrate is viscose, light enough for a summer wedding but not so light as to be see-through. 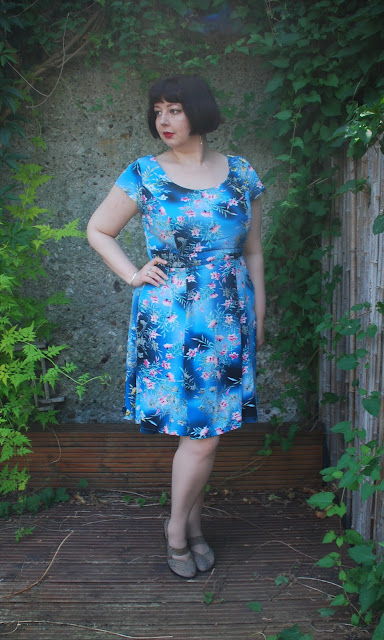 I also knew as soon as I saw the fabric that it called for something a little... swooshier than I'm used to making. I haven't made a skirt fuller than an A-line in five years and had fully assumed I never would again. If a quick scroll back through my blog post list is to be believed, I've only made one woven dress that wasn't either a maxi or a wrap (or both) in the last four years and I didn't even like that one. I think my assumption when I wrote my plan was that I would use the knee-length version of the Anna skirt, but I was extremely uninspired by the idea of an Anna dress in this fabric. So I went trawling through my pattern boxes and found the Sew Over It Doris dress, which I made exactly once in my first year of sewing and never wore. The skirt pattern has more exaggerated gores than any other I've owned, so it's quite fitted over the hips but provides a decent amount of swish at the hem. I ran up a quick toile (which you will see shortly) to make sure I didn't hate it, and decided to pair it with the Cashmerette Upton bodice. 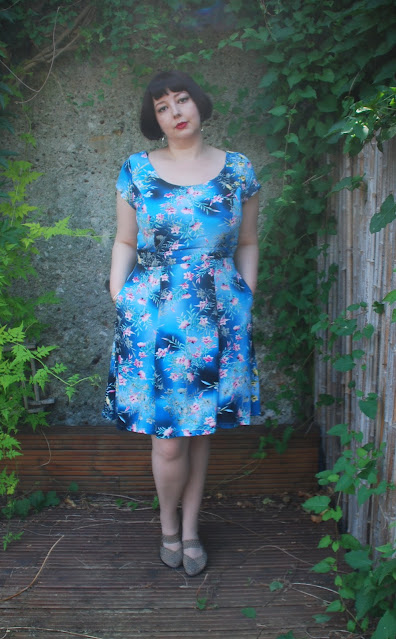 Originally I had intended the sleeves to be flutter sleeves, and that's what I cut, but I ended up chopping them right back when I tried the dress on. Every now and then I have another go at flutter sleeves and I always end up cutting them back because they look really matronly on me. I went somewhere in between the two skirt lengths the pattern provides to get it to hit just above my knees (I'm just over 5'8", for reference). I put in my standard side seam pockets and they worked amazingly well. My phone stayed securely in my pocket all night despite many hours of overly enthusiastic wedding disco dancing. 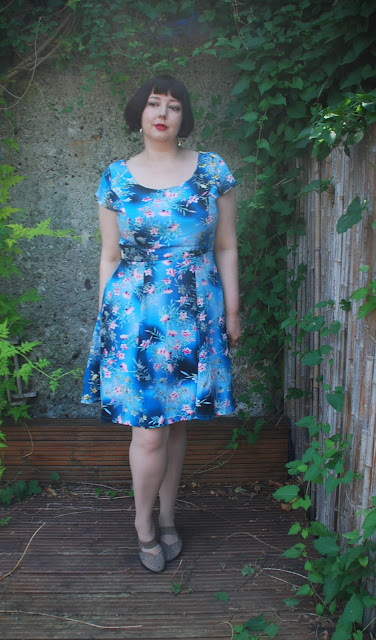 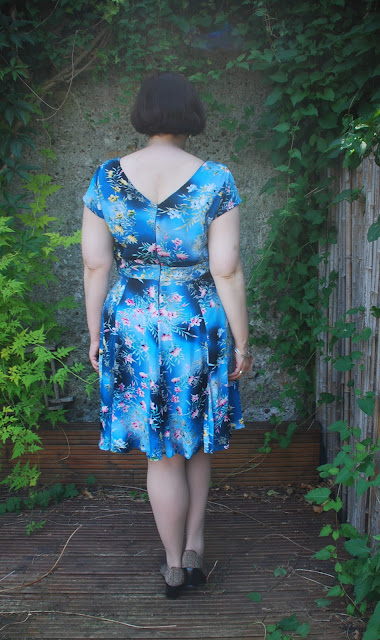 There is one problem, and it's the back. It was fine when I finished it, but it's now bagged out of shape around the zip. I'm not fully sure why this is or how I would fix it, but the biggest obstacle to my keeping this dress for future family events is that it now looks quite unsightly from this angle and I would need some kind of cover-up for it. If I had any leftover fabric I would just recut the back panels, but because of the fuller skirt I had to do some quite complicated pattern Tetris to get this dress out of 3m of fabric and there are only the tiniest scraps left. 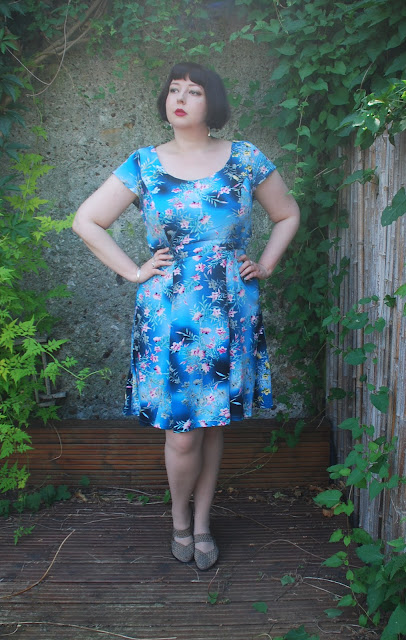 Having not made or worn this type of skirt since 2016 I wanted to make sure that it would work first, so I decided to make a wearable toile out of another piece of viscose I bought at the same time. I ran out of time to get it completely finished before needing to start work on the real one, so I got it to the stage where the skirt was attached to the bodice and I could pin it onto myself and make sure I liked the style enough and then put it aside to be finished after the wedding. 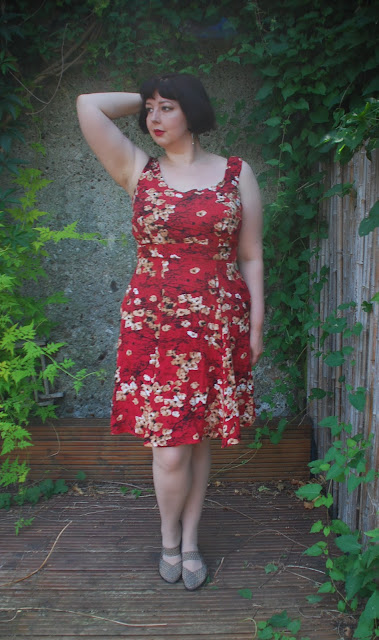 This one is the darted Upton bodice rather than the princess seam one I ended up using for the blue dress, and there's not much reasoning behind that other than that I'd decided I wanted sleeves on the actual dress and couldn't be bothered printing out the darted bodice with sleeved armscye when I had the princess seam one ready to go already. Other than that it's the same - same skirt, same pockets, same neckline. I did topstitch the neckline here to try and make it feel a little more casual. The way that I want to wear this dress is as an everyday no-thought-required sundress and not as something that needs an occasion. 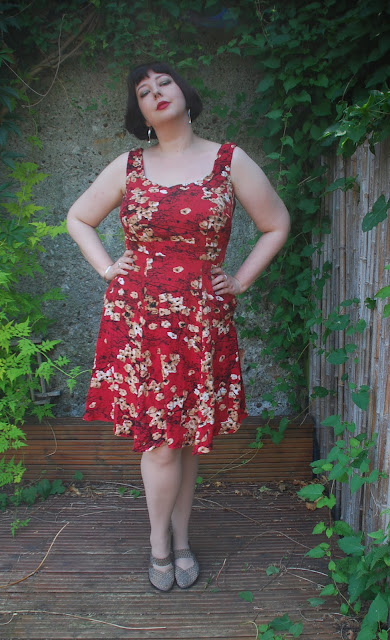 This quite standard summer dress is way out of my comfort zone these days. Almost all of my skirts are maxi length and the few outliers are all autumn/winter dresses designed to be worn with thick tights. I never pick sleeveless if there's an option for a short sleeve and I tend to prefer a higher neckline for summer. I just don't own anything remotely like this and up until now hadn't missed its absence. But to my pleasant surprise, I've been really enjoying wearing this one over the past couple of weeks. It's easy to wear, the skirt length works perfectly, I don't feel particularly dressed-up in it even though it's bright red. I feel comfortable. 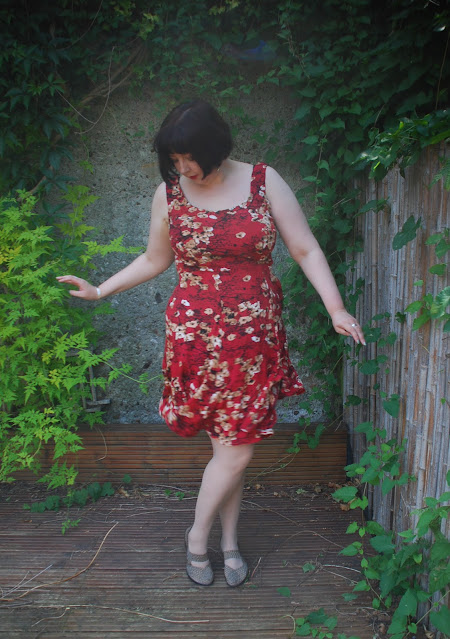 On both dresses I took the time to do the hems properly, and on the red one I did a narrow hem, which I'm honestly not sure I've ever done before. The skirts I make rarely have much of a curve to the hem so I've never really thought it necessary, but I gave it a go here and I'm pleased with how it came out. I would certainly do it again on any curved-hem skirts I make in the future, and time will tell how often that might be. At present, I'm really not sure. As I've said many times recently, I'm a bit bored with my current limited range of silhouettes, and I've been surprised by how much I like these two dresses. I think I'll want to spend a bit more time reflecting on whether it's the garments themselves or simply the fact that they're different before I go making any more, but it's not out of the question that this could become a more prominent style in my wardrobe. Hemming remains my very least favourite sewing task, so there will probably always be a bit of reluctance towards massive skirts that take large amounts of time and effort to achieve a nice finish for, but I do now know that I can and it's not a guaranteed waste of said time and effort. And that might help. 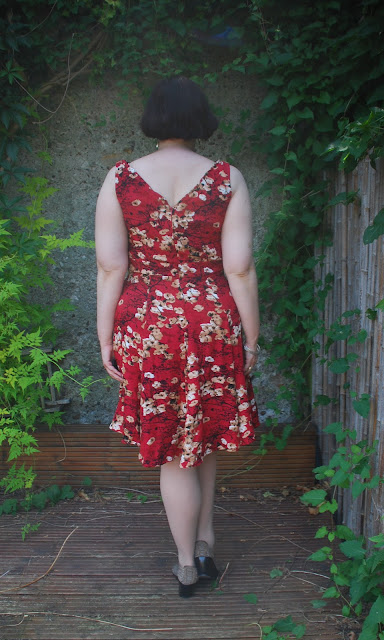 (The back has not bagged out on this one.) 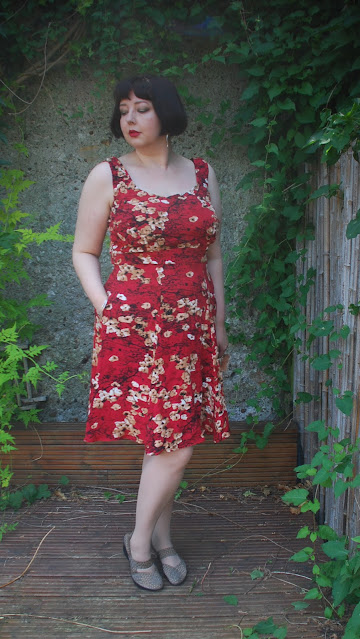 That's everything from my spring plans posted! I've made a start on my summer projects already, though nothing is actually finished yet, and I've also cut out several quite unseasonal experiments in an attempt to get some remnants out of my stash. So those may or may not be coming your way depending on how they turn out. I'm obviously expecting that my sewing will slow down until I can get all my life shit sorted, but I am hoping that I won't need to stop entirely and that I can continue to blog regularly. I quite like having this Monday morning anchor point and I would like to keep it up if I can.

Up next: trousers! For real this time.