Hello, I have been gone for a million years, I'm so sorry. I tried several times to write an update post and I just couldn't do it (I don't even know why, it's not like I had terrible news to share), eventually just deciding to let the blog be until some of the stuff was sorted out. I have been sewing off and on, and there have been a lot of fails - I'm especially grumpy about the Esther trousers, which don't fit even though I used the exact same pattern as my other pairs which do fit. The sewing was really good on them as well. Gah.
Anyway. Last Friday we finally, finally exchanged contracts on our new house, which means that next week it's ours. We're not going to be able to move in immediately - we've both been renters our whole adult lives and don't really have any furniture to speak of, so that needs to be made and delivered first - and we haven't yet decided what kind of timeline we'll be on, but next Tuesday we will go to our new house and I will mark my territory by putting a piece of fabric in my future fabric cupboard, a multipack of loo roll in the bathroom, and Gerald the hideous silver bird water dispenser on the living room shelf. This means that the era of palm tree photos is coming to an end (I am sick to the back teeth of this stupid falling-apart leaky flat but I will miss the palm tree dearly). Not quite yet, though.
It occurred to me a few days ago that the ridiculous Spice Girl top has been the first post on my blog for about two months straight, so that would have been the first impression for two months of whatever newcomers might have stumbled across it. Probably ought to do something to correct that. 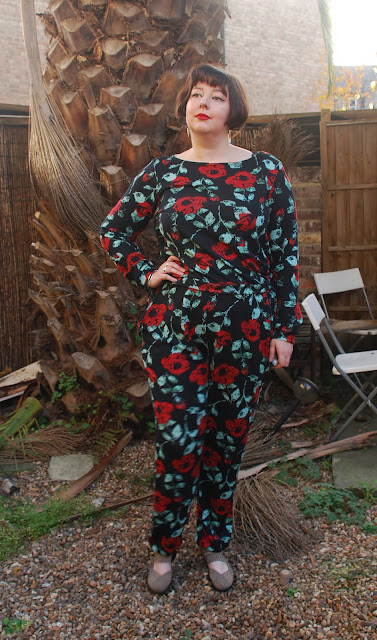 Check this out. It's utterly ridiculous and I love it.
This is the Style Sew Me Lisa lounge set, and while it wasn't on my autumn sewing plans it has been on my list for some time. I hadn't heard of the company until a list of Black-owned sewing brands went round over the summer, and I loved this set as soon as I saw it. There are three views: this one (boat-neck top and tapered bottoms), a set with a batwing top and wide leg trousers, and a full long-sleeved hooded jumpsuit, which I am absolutely going to try at the earliest possible opportunity. 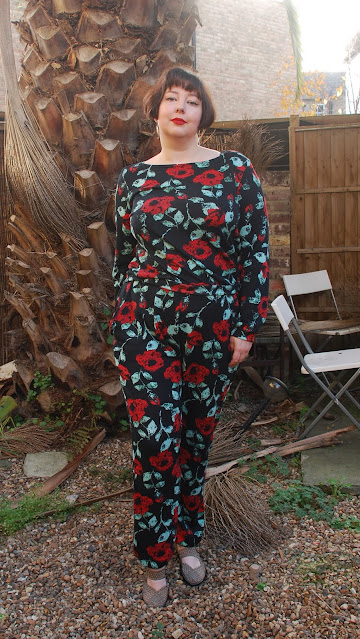 This is actually my second attempt at making this pattern. For my first attempt I'd bought some inexpensive silver-blue velour that I thought was really pretty, but it was disastrous to work with. I haven't experienced shedding that bad in a long time, and I use a fair bit of velvet-type fabric in my projects. Before I could even complete it, Patrick and I had agreed that all trace of the stupid velour needed to be banished from the house immediately as we were in danger of actively having to swim through it. That was a while ago now and I'm still finding the fluff on things.
For this version I used a sweater knit that I'd bought for a wrap dress. I like this fabric but I would not have liked it in a wrap dress, and had I not been stress-shopping I wouldn't have got it at all. Fortunately it was easy to repurpose for loungewear and it turns out that I actually love this. The bold-patterned head-to-toe faux jumpsuit thing is really working for me. No, I'm probably not going to go to the pub like this (not least because I'm not going to the pub at all, sigh), but this is a piece of loungewear I feel genuinely fucking great in. 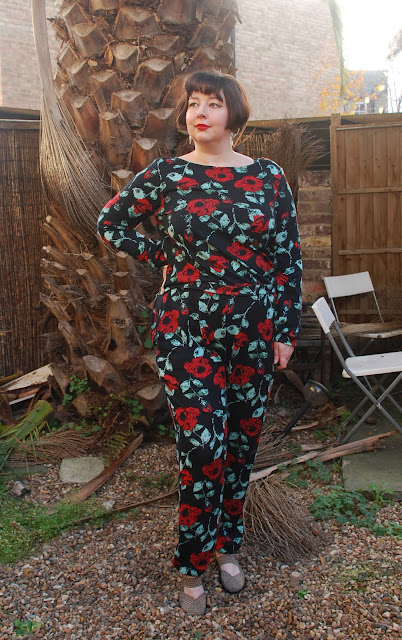 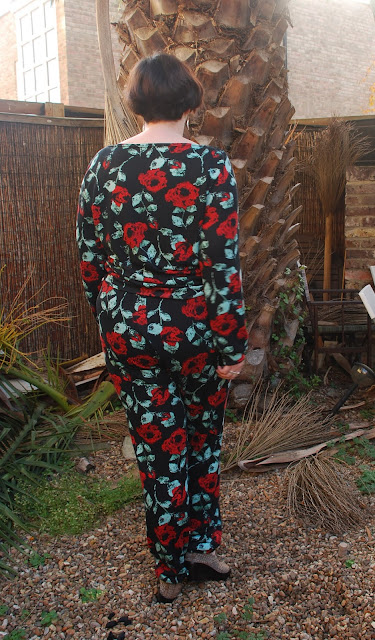 I did make one alteration between the Nightmare Fluff version and this one, and that was to substantially lengthen the front rise. I feel a bit stupid saying this, but it didn't remotely occur to me that any trouser pattern might be low-rise. And some of them should be! It annoys the piss out of me that pattern companies often all make the exact same thing at the same time with no real difference in style or fit to appeal to different customers, and there should be different rises and fits so that more people can find the thing they're looking for. In principle I actively like that these are low-rise. In practice low-rise does not work on me at all, and so I changed it for this version. My first version was low-rise in the front and hit my waist in the back, so I only lengthened the front pattern piece to get the fit I wanted. 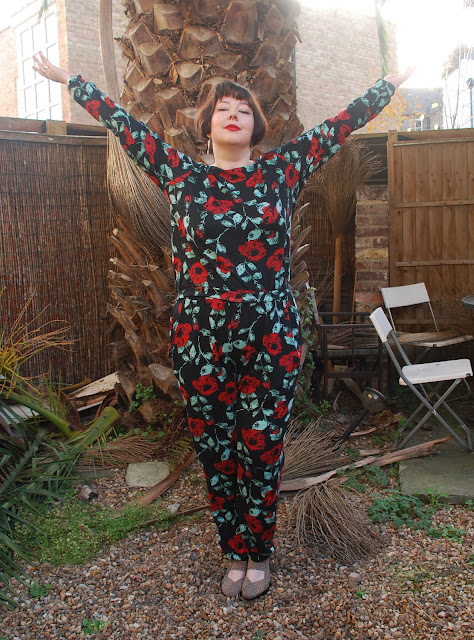 Interestingly, the pattern has you finish everything with bands except the neckline, which is just hemmed. That's what I've done here - I really like the shape of this boat neck and I didn't want to distort it by trying to bodge a neckband in there - but I'm curious to see if holds up to being stretched.
I will definitely make this again, I think it's great. I'm particularly keen to make the trousers in a less ridiculous fabric and see if I can get away with wearing them outside. I would also like a non-shedding version of the velvet set I planned in the first place. And as I said, that hooded jumpsuit is coming (though probably after we move because I have a very full sewing queue and would rather not get involved in printing new PDFs right now). 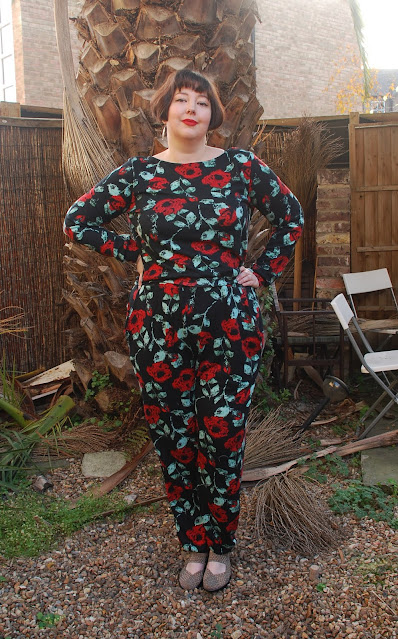 I have managed to finish and photograph a bunch of stuff, so regular posting schedule will resume, at least for a bit. What you will not be seeing is the Named Astrid trousers, which I thought were really nice when I first tried them on, but in all the photos my crotch looks like that time Homer Simpson ate a super sour gumball. 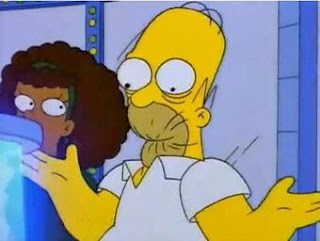 NOPE. I have absolutely no idea why and I'm not invested enough in the trousers to try and work it out. But I do have my Fumeterre, my Hepburn tops and my Plausible Deniability Trousers to come, and none of them are that upsetting. See you next Monday, one day before I officially become a home owner!
Style Sew Me Lisa lounge set
Fabric: Rose print sweater knit from Fabric Land
Cost: £15
Pattern details: Three different loungewear sets - boat neck top and tapered trousers; dolman top and wide leg trousers; and a long-sleeved hooded jumpsuit
Size: L for the top, XL - 2XL for the trousers
Alterations: Front rise lengthened by 4cm (I think? I didn't write it down at the time)
Would make again/would recommend: Yes/Yes
Posted by Jen at 10:00