For the first almost-three-years of my sewing journey, I never touched a Burda pattern. Two main reasons for this: one, I am awkwardly sized so that my top half fits into their regular range but my hips are well into their plus range; and two, the tracing. Oh God, the tracing. I rarely trace my patterns at the best of times (unless I'm forced to or know I won't be able to replace it) and just looking at the mass of overlapping lines gives me a headache. I will have to deal with this soon, because the only leather jacket pattern I like is Burda and is in the one issue of the magazine I have. I could buy it again separately, but I'm pretty sure that my £5.99 could be better spent elsewhere.

What I've done here is neatly sidestepped both those problems by acquiring a men's paper pattern. 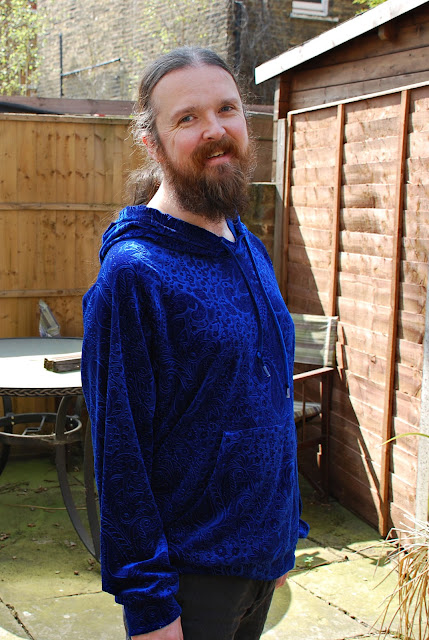 I don't make a lot of handmade stuff for my boyfriend. I don't want to be making stuff for the sake of it and he's picky enough that it's fairly rare to find something he really wants which is also within my skill set. But when something does fall in the middle of that Venn diagram, it usually requires a bunch of new techniques that I wouldn't have got round to for years if making stuff for myself and I come out the other side marginally stressed (because it matters more if it goes wrong) but with a pile of shiny new knowledge that opens up doors to a new variety of Jen-shaped patterns.

New technique number one: use of paisley velour. 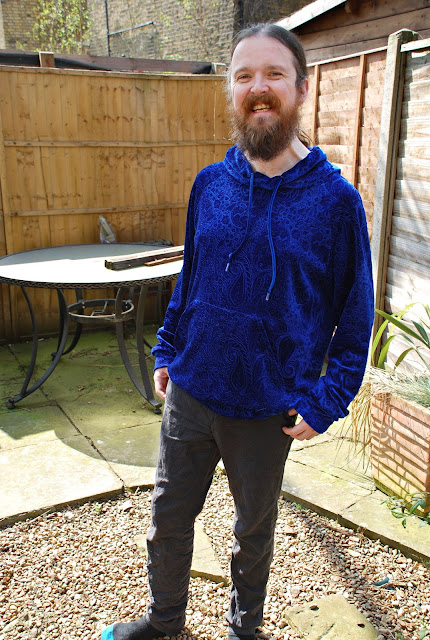 I've never got round to using velvet or velour for myself because the one time I tried to cut into some it started shedding all over everything like an over-enthusiastic sheepdog and I decided I didn't need that kind of negativity in my life. But then I said "paisley velour hoodie" to my boyfriend and he started gently glowing from the inside, so I powered through and got it done. The shedding was nowhere near as bad with this fabric (another Abakhan purchase) thanks to its shorter pile and its print, so rather than a blue floor I just had some slightly furry scissors by the end. 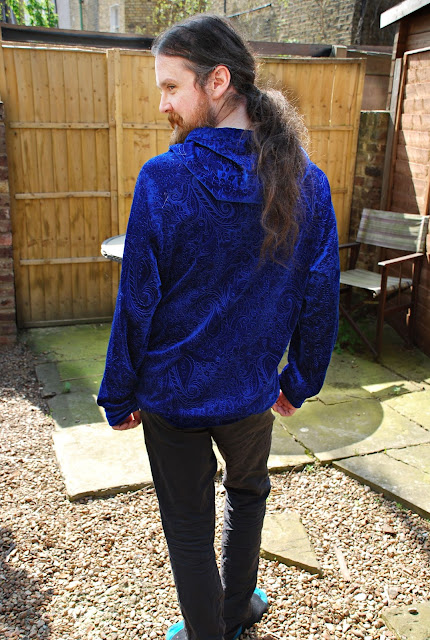 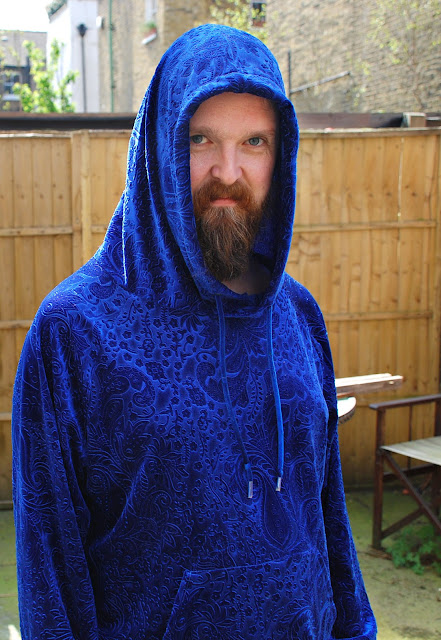 The hoodie has raglan sleeves and a typical hoodie front pocket, and it went together very easily. It's a very well-drafted pattern (which I was expecting given how many Burda fans there are out there) with fairly sparse instructions. It's not a complicated pattern so that wasn't an issue, though I do think they called for an unnecessary amount of basting. I got as far as sewing the hood sections together, and then I had some more learning to do. 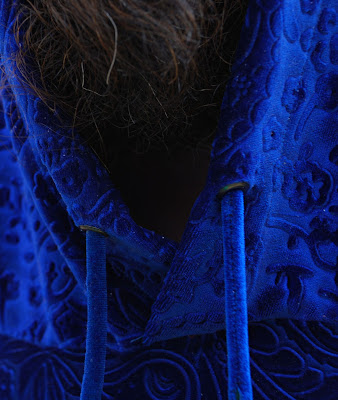 This was my first foray into installing hardware on clothes. It was one of the goals I set myself for the year and it was nice to have an impetus to get on with it already. I'd bought a starter kit but not bothered to read the instructions, so five minutes after I sat down to get learning, I had to stand up again and go and buy a hammer. Why did it not occur to me I'd need a hammer? Who knows. Apparently the idea is to punch a hole in the fabric using the hammer and eyelet tool, but the fabric would not be punched, so I just cut a hole instead. I don't know whether this was my fault, the fabric's fault, or the tool's fault. I had one practice go at installing an eyelet on a piece of scrap fabric and it... went in fine and looked like an actual eyelet, which I was not expecting. I put the next two straight into the garment, and they also went in fine and looked like actual eyelets. I spent the next couple of hours feeling incredibly smug. 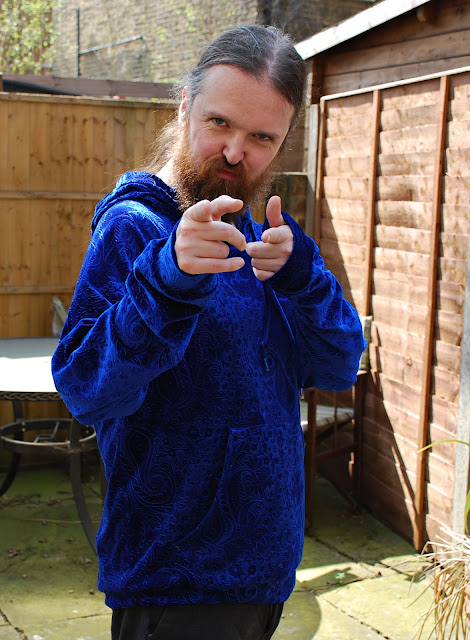 (This is as close as a representation as we'll get of me looking smug after installing eyelets correctly for the first time.)

The pattern calls for ribbing on the cuffs and waistband, but the ribbing I ordered turned out to be a horrible colour mismatch and I didn't have time to get any more. I used the self fabric and I think it's fine. The drawstring I bought matches the fabric exactly, so weird dusky blue ribbing would have looked extra wrong. 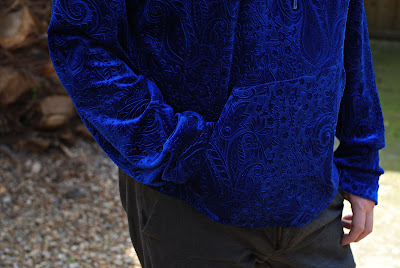 This has been an exceptionally well-appreciated present. Patrick wears it almost every day at home, and when we have people over he insists on going to put it on and modelling it for them. Sometimes he just says "paisley velour hoodie" for no reason at all. I'm very proud of it - it couldn't be more perfect for him, and beyond a couple of slightly wonky stitches I think I've done really good work here. I would definitely make this pattern again, and it's really making me want a hoodie of my very own. 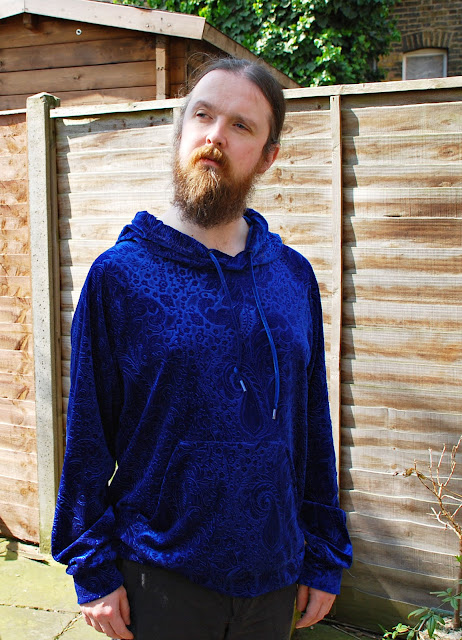 I'm not sure what will be next up. I've been struggling for motivation over the last few weeks, and the things I have finished I hate too much to ever photograph on my body ever. Hopefully things will pick up a bit this week and I'll be able to get some finished garments and nice photos before we head to my in-laws at the weekend. Though I have my FIFTH dental operation this week (apparently two of my teeth died inside and my dentist can find absolutely no explanation for it! What a joy it is), so we can't count on it. Fingers crossed one of my experiments actually works out for me.
Posted by Jen at 10:00

Email ThisBlogThis!Share to TwitterShare to FacebookShare to Pinterest
Labels: burda, completed, sewing for others