Back, back, back again: the Rumana coat

Hi everyone. First of all I want to say thanks to the people who left supportive comments on my last post (including the ones that made it to my email but didn't show up on the actual blog for some reason) and everyone who messaged me directly. I was very much not in a place to reply to everyone, but I really did appreciate it and it's one of the things that helped get me into a place to come back. I thought I was going to be away for a week, and that turned into more than a month (not a fun month, either), but I think - I hope - that the worst is behind me and I can start to get back to living and sewing again. 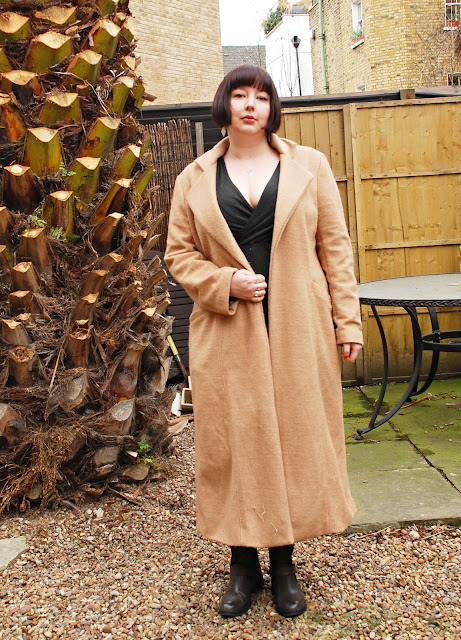 Here we have the By Hand London Rumana coat. I bought this fabric several months ago on a trip to Abakhan in North Wales with the mother-in-law, and originally it was going to be a Leanne Marshall Simplicity coat. Then I decided I didn't like that very much and it was going to be a Rumana, before changing my mind again and cutting out the pattern tissue for Vogue 9289, whereupon I discovered that the pattern pieces were way too big for my fabric (ah, grown-on sleeves) and went back a step to the Rumana. Phew. 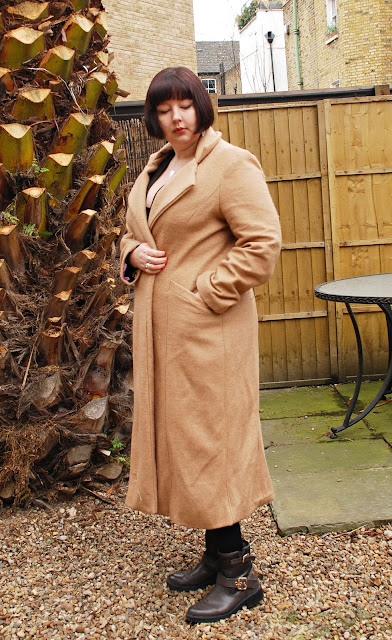 The coat has a proper collar and collar stand, which I'd never done before. I was expecting it to be as annoying if not more than a shawl collar, but it was actually easier. (I hate shawl collars. Guess who'd currently making herself a dressing gown and struggling to find the motivation?) It also has giant pockets, which I very much appreciate. 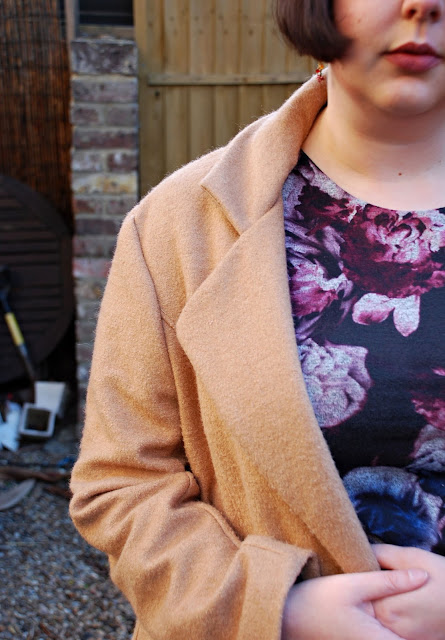 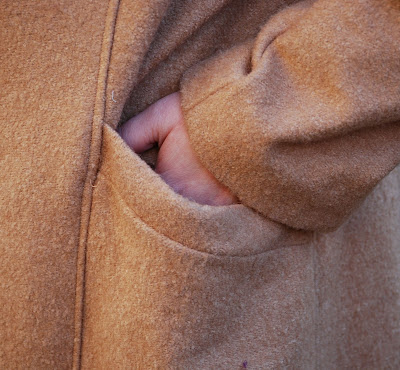 (Close-up collar and pocket shots. I got Patrick to take these on a different day, hence the sudden costume change. I think the collar in particular looks really good and I'm proud of my work there.) 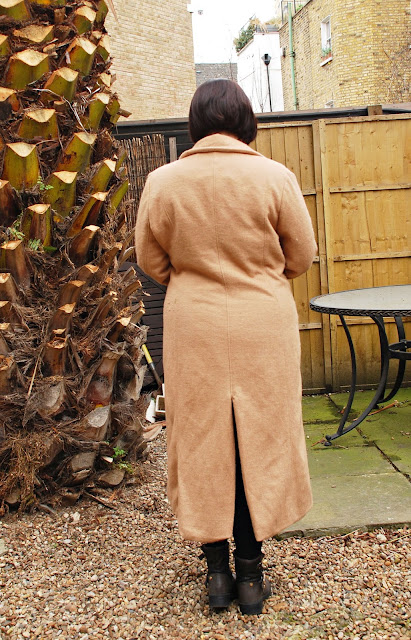 The coat is fairly sleek and close-fitting, and so has quite a large back vent. I don't think I've ever sewn a vent on a lined garment before and for me was probably one of the more confusing things I had to do. This fabric is wool mix and didn't take to the iron quite as well as I was expecting, and the vent in particular I had to come back to several times to press the shit out of it. It still doesn't look like it's had the shit pressed out of it, so I'll probably keep doing it occasionally. 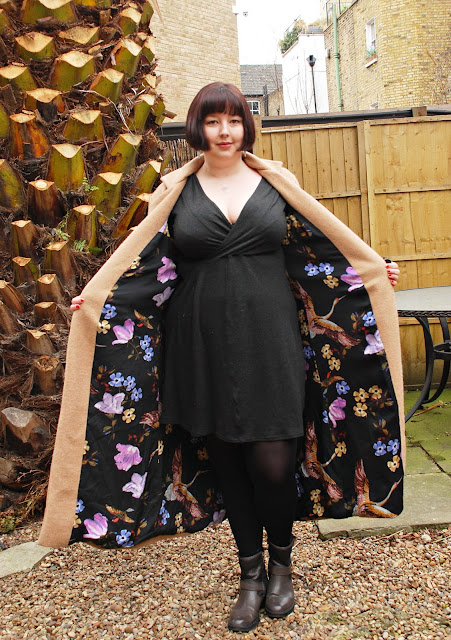 I got this lining from Fabric Store in Walthamstow. It's a super-soft viscose and it feels really nice against bare skin. This is the kind of print I would never actually wear on the outside, but looks great as a coat lining; not so dramatic that it overshadows the actual coat, but dramatic enough that it's definitely a feature. A bunch of people have commented on it already, which is nice. I had enough left over to line another jacket, which hopefully you'll be seeing soon. 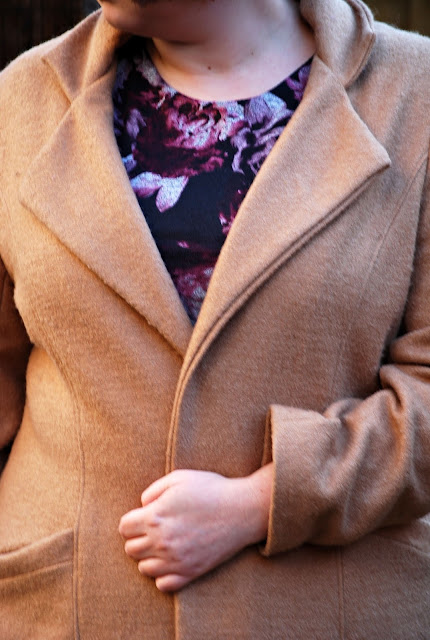 I've not put a fastening on this coat. The pattern does come with button placements, but it looked like such an afterthought, like someone somewhere in the testing process said, "Uh, could this coat maybe close somehow?" and they went, "Oh! Closing! Didn't think of that!" I much prefer the look of it without buttons (and I don't think I've seen buttons on any of their samples) and though it does mean I have to hold it closed when it's very cold, that doesn't bother me as much as you might think. For most of spring and autumn I'll just let it billow out behind me, Spike-style. 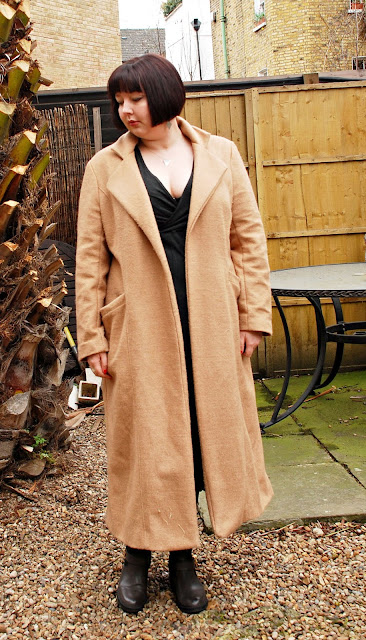 I have worn this coat literally every day since I made it. It's really great to have a proper long coat and I'm glad I went with the pattern that would allow me the most length for my three and a half metres. I made this coat in January (the only thing I made for the first two whole months of the year) before the cold snap and snowstorms, and even while I was feeling properly shitty I was extra grateful to Past Jen for having managed it. If I'd had to go out in negative temperatures in a hip-length coat, I think I might have cried. Or never left the house and starved, whichever. 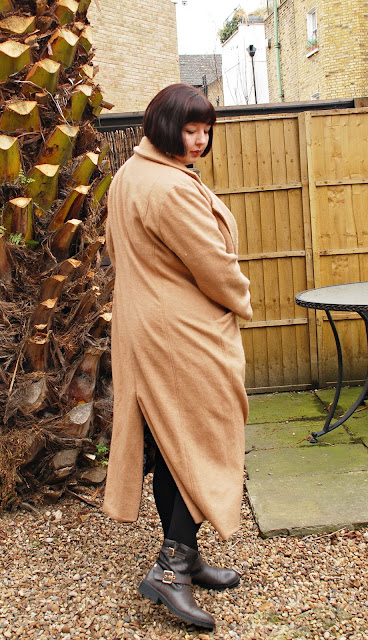 Next week is going to be a planning post, and then we're going to Spain for a couple of days. I'm hoping that pretty surroundings will allow me to get another couple of garments photographed, and I can get back into something resembling a rhythm. We shall see!
Posted by Jen at 10:00