The Liberty print Christmas present of doom: my MANY THOUGHTS on Butterick 6837

ALRIGHT. Welcome to the most expensive and time-consuming project I have ever embarked upon. 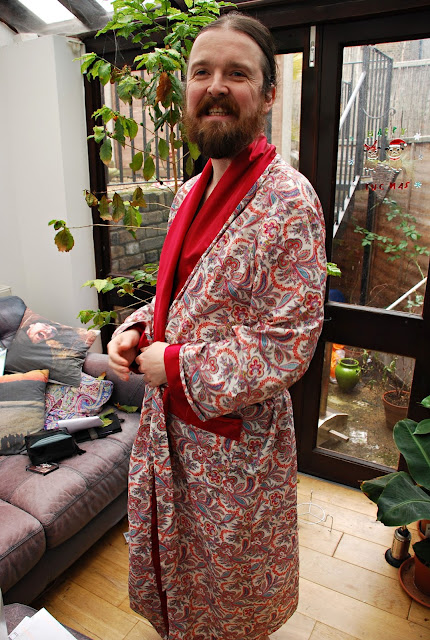 I've been promising Patrick this dressing gown for at least the past two years. I don't make many things for him because everything he likes to wear is super-complicated and his standards are pretty high, but I thought this would be much closer adjacent to my wheelhouse. The reason it's taken this long is that it was impossible to find the right fabric. Patrick has extremely specific taste in prints and there just didn't seem to be anything that was right for him. After scouring Goldhawk Road, Shaukat, the Liberty website and anywhere else that claimed to sell Liberty silk, we concluded that silk just doesn't come in the kinds of prints he likes, and picked this Tana lawn instead. 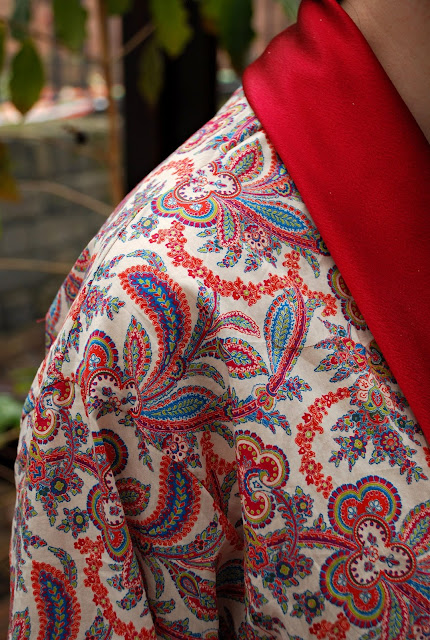 The pattern is Butterick 6837. I'd never made it before, so I decided to make a toile out of an old duvet cover that had fallen apart in the wash. It was a nice soft duvet cover, so I had in the back of my mind that I could claim it for myself once the final version was finished. Sadly it was not to be; the toile was enormous, fit completely differently on each shoulder, and was generally unwearable for either of us. Assuming it was a cutting error on my part (which at least some of it must have been), I bought some cheap silky fabric and tried again. The second toile definitely helped me see where the errors were much more clearly, and having finished it I felt confident enough to move on to the proper expensive fabric. I learned a lot from that toile, most notably that this dressing gown looks horrendous on me. Turns out that "unisex" means "for men". It comes in men's sizes, is designed to fit a man's body, and in some cases makes design decisions which make the thing unwearable for women in ways that really wouldn't be the case the other way round. 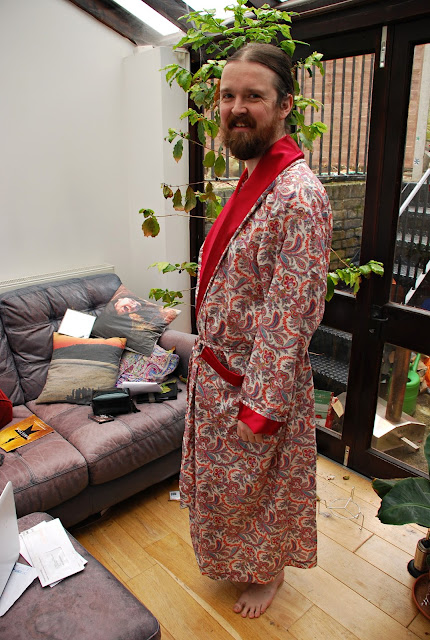 Let's start with: it's giant. I started out making the L, but for the final version downsized to an M, and it's still pretty huge. I, with my gigantic hips, have plenty of room in this thing (I tried it on several times during construction, mostly for pocket placement things). I've never worked with a men's pattern (sorry "unisex pattern") before so I don't know if this is normal, but all the reviews of the pyjamas included in this set mentioned similar things. I did have a go at the tank top, which is the only thing in the envelope sized for women, and that definitely did NOT go over my hips, FYI. 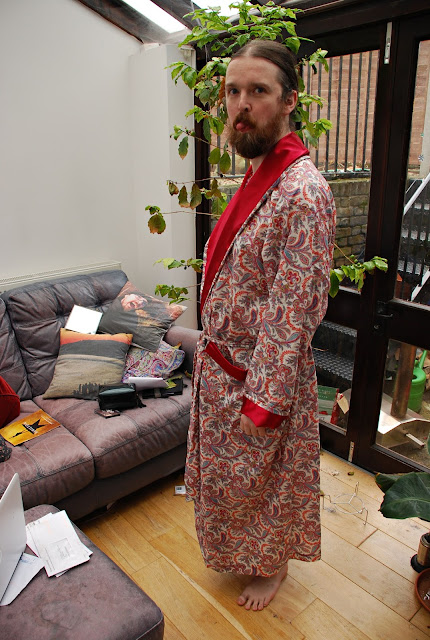 Second: all the details are positioned very strangely. On the second toile I initially placed the belt carriers as I was told to, and was basically belting the thing over my ass. To get the belt to sit at the waist I had to yank the entire dressing gown up in a very ungainly fashion. I know I'm short-waisted, but I've never had this problem with dressing gowns before and also have never met a woman whose waist is where my ass is. I then discovered that this doesn't even work for men, because when I tried the toile on Patrick the first thing he said was, "Can you move the belt loops up? This is kind of uncomfortable." He's the exact height Butterick men's patterns are allegedly drafted for, so this is nonsense really. I moved them up two inches, which he said was much better. (For the final one I made my carriers by folding the raw edges into the middle, folding in half and edge stitching rather than making a tube and spending ages trying to turn it the right way round.)

According to the illustrations the pattern is designed to hit somewhere around the calf on the body they've drafted for, so I added several inches to the length. Based on the fabric guidelines and what I had I was expecting to be able to make a pair of matching shorts, but that turned out not to be the case, so I made a longer dressing gown and a nice work tie instead. 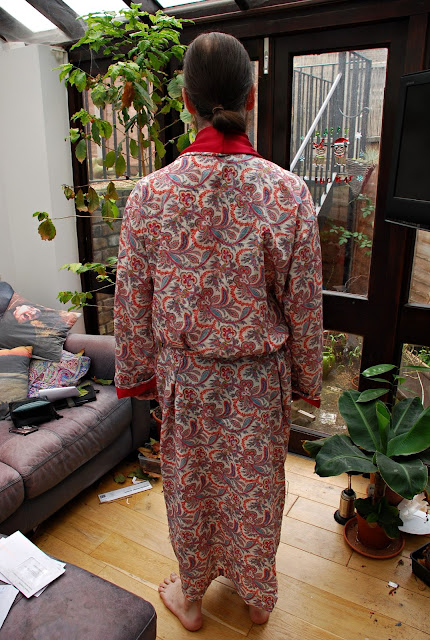 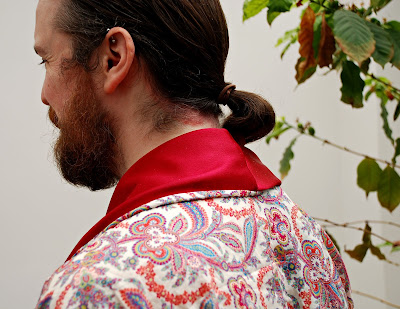 I also felt the pockets were placed way too low, and for the final robe I dispensed with the markers altogether and positioned the pockets directly on the finished garment as I was wearing it. That didn't make for the easiest pocket-attaching experience, and I still don't really like the way they look, but I do think this is an improvement. All of the detailing seems to have been designed for a man with a crazy long torso and crazy short legs. I put strips of contrast fabric across the top of the pockets because I felt it needed it, but since it was just me making things up the execution isn't great. It's the only thing I'm displeased with, though, which is quite a relief for a project this size. 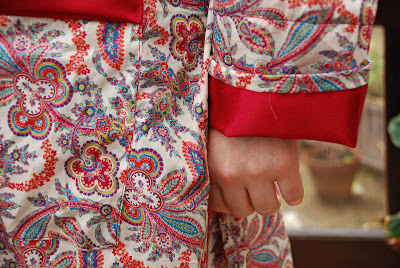 I used a raspberry-coloured crepe-back satin for the contrast, and I'm very glad I did. On the toiles I used the same fabric for both the main and the contrast, and honestly it didn't look great. I also think using a slightly heavier fabric for the collar helps it to sit better. I know there's a kind of edging of the self fabric around most of my contrast pieces; that wasn't deliberate at first, but when I tried pressing it away I decided I didn't like that as much and left everything as it was. I also used some of the satin to make a spare belt (which I forgot to photograph, soz) since I'm fairly sure that the Tana lawn belt will be pretty disgusting after a few months of hard wear. It's already impossible to press the creases out. 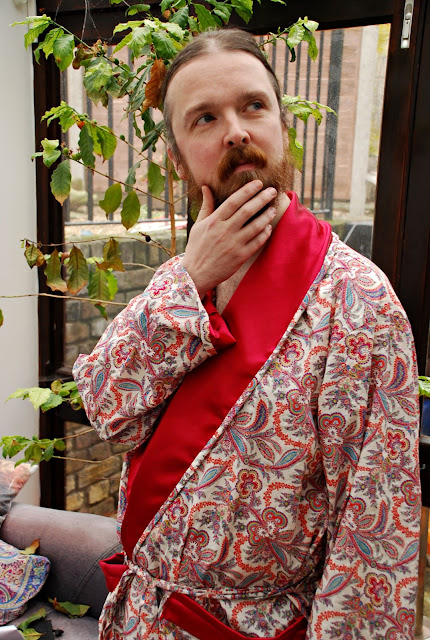 Construction was fairly simple, aside from the shawl collar, which I'd never done before and was completely perplexed by. There are a million sewing tutorials on the internet, but none that were prepared to explain shawl collars to me in idiot-proof language. This was my third go and it didn't get less perplexing, but I think I managed it okay. I'm not in a hurry to do it again though.  The Tana lawn was wonderful to work with as always, the satin somewhat less so, but we got through it with only minimal threats directed at inanimate objects.

EDIT: I'm coming back to this a year and a half later to add something about the shawl collar. I didn't write about this at the time because I assumed that was just what shawl collars were like and I was an idiot, but I've now discovered that no, this pattern is weird. When I tried to pin the collar to the back shoulders I was absolutely convinced that the collar piece was way too long. I'd clipped into the corners but that wasn't making too much difference. What I eventually discovered (through a long and confusing internet rabbit hole that I can't even remember now) is that the point you have to clip to is WAY into the garment. The clip circles were so far in that I didn't realise that's what they were. I actually think calling it a "clip" is misleading, you have to chop into that corner to get the back shoulders to match up with the collar piece. At the time I assumed I just had an embarrassing gap in my knowledge, but it turns out that no, other people have been confused by this too. So if you're reading this because you're trying to make this pattern and got stuck at the collar, this may be what's throwing you!

All of the exposed seams are French seamed, and I finished all the unattached raw edges with Liberty bias binding. I'm not going to come anywhere near the expense level of this project for quite some time. 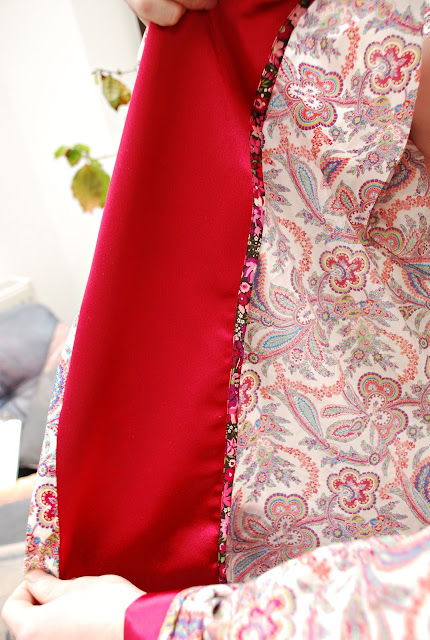 Overall I'm really pleased with this. Making it was kind of a fraught experience (stupidly expensive materials + unreliable pattern + intended for somebody else = ARGH) but I'm glad that I've done it and he really likes it. This style of dressing gown is exactly right for him, so from that angle I'm happy that I used it, but as a pattern I was not impressed at all. The next project in my queue is a dressing gown for myself using Vogue 8888, and I pray that goes more smoothly than this one did. Still, it's done, and I'm happy. And so is he. 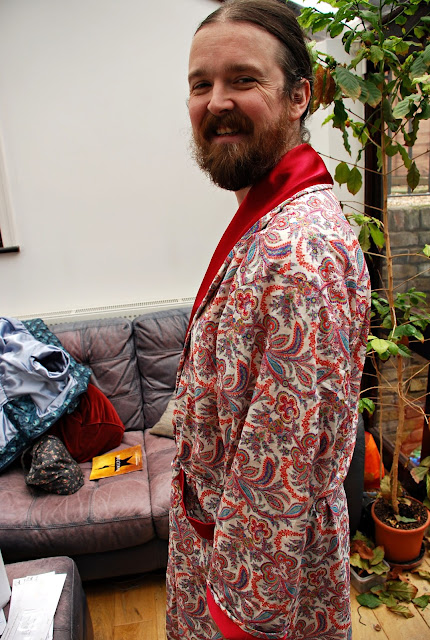 Before I wrap up, I'm going to share my tip for taking photos of camera-shy boyfriends: shout out a string of really terrible dad jokes. 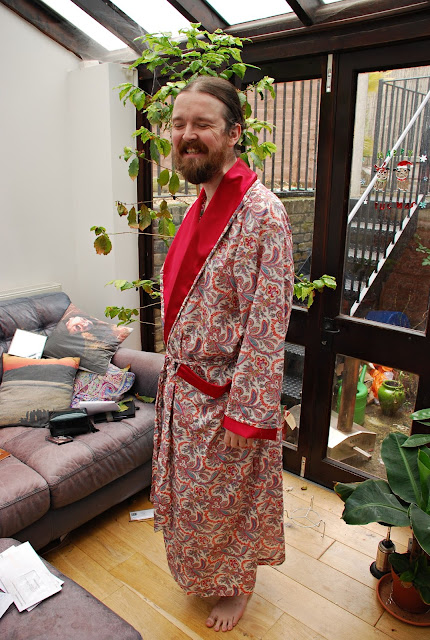 His favourite: Doctor doctor, I think I'm a bridge. What's come over you? Two cars and a lorry.
My favourite: Why is a duck in a microwave like an old soul singer? Because its bill withers.

Email ThisBlogThis!Share to TwitterShare to FacebookShare to Pinterest
Labels: butterick, completed, sewing for others